After being shifted from the 7th Congressional District to the 3rd in 2011, Portage County is set to switch representation once again in 2021, with the Republican plan splitting Stevens Point and Plover between the 7th and 8th districts, while the People's Map Commission moves it entirely into the 6th. 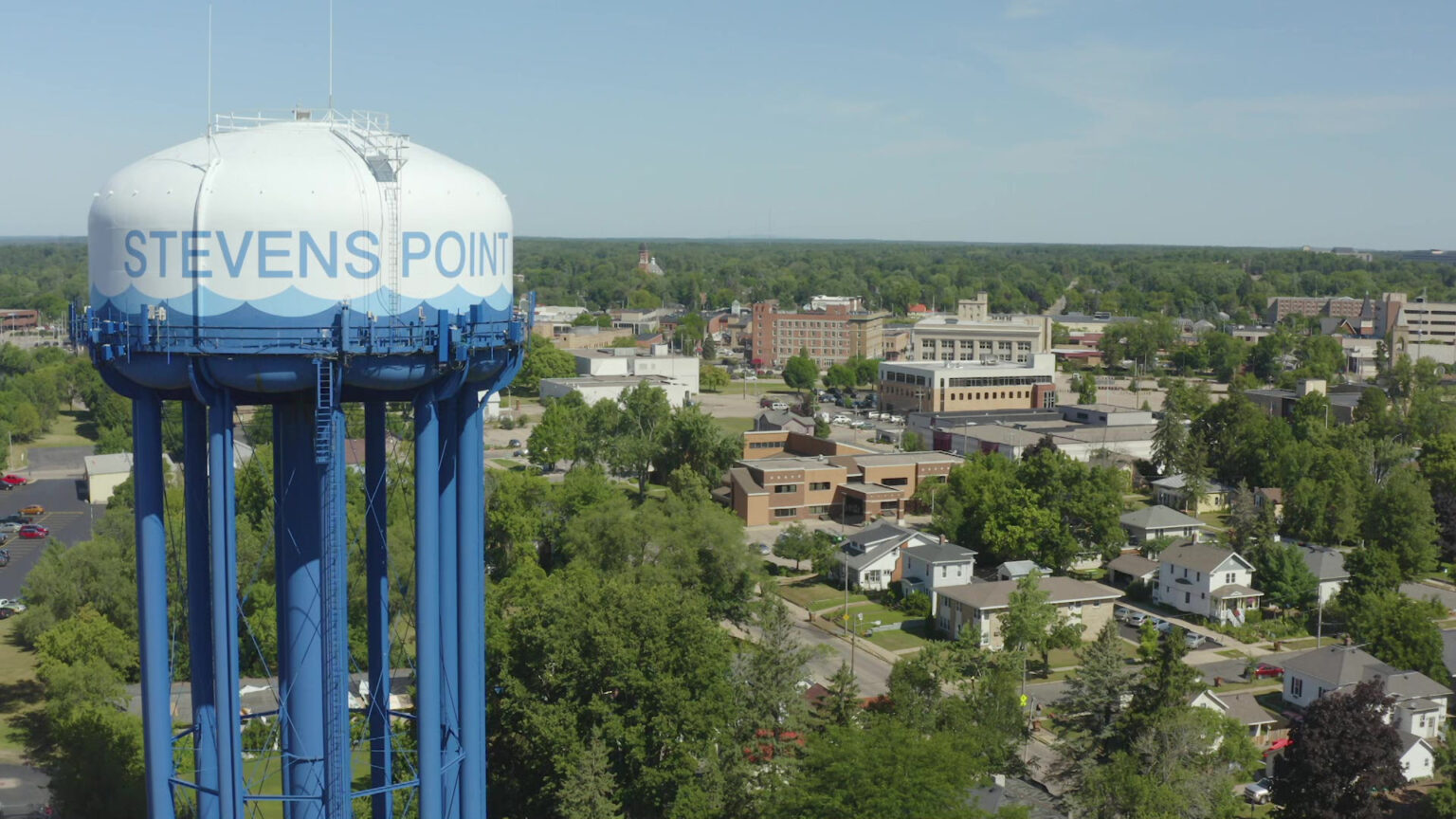 Portage County is in the center of Wisconsin and is also at the center of the state's battle over redistricting. Depending on which map is ultimately put in place, it could end up in one of three different congressional districts, or be split among them.

"I'm kind of tired of getting tossed around like a football," said Gary Hawley, co-chair of the Portage County Democratic Party.

The reason was political. Anchored by the communities of Stevens Point and Plover, which together comprise over half of its population, Portage County has voted for Democrats up and down the ticket for decades. In 2011, District 7 Congressional was home to freshman incumbent Rep. Sean Duffy, a Republican, who had flipped an open seat vacated upon the retirement of a Democrat who had previously held it for over 40 years. State Republicans then moved Portage County into the District 3 seat, held by Democratic Rep. Ron Kind. The switch shifted the county's voters, with its majority of Democrats, into Kind's district and away from Duffy's.

The Difficulty of Defining 'Fairness' in Wisconsin's Redistricting Process

Noon Wednesday: Mapped Out, Locked In 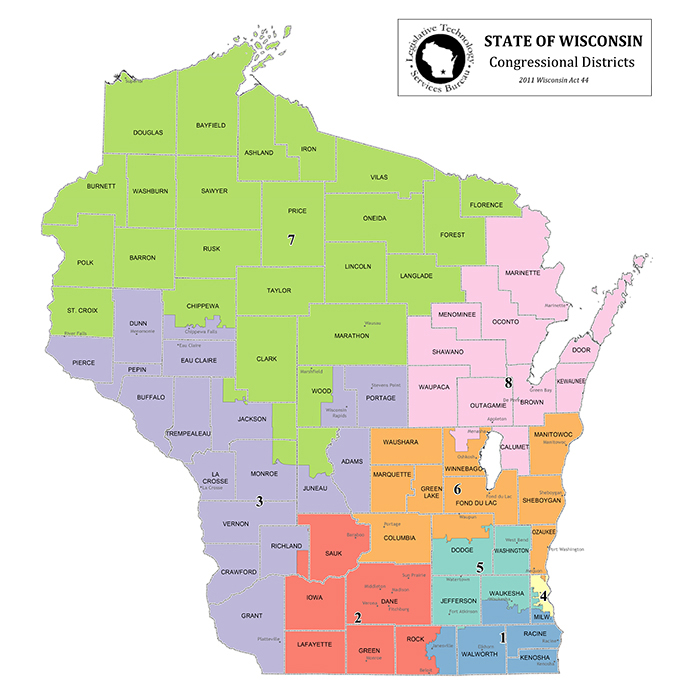 In 2011, Wisconsin’s Republican-controlled state government enacted a round of legislative redistricting that placed Portage County, located in the center of the state, in District 3. (Credit: Wisconsin Legislative Technology Services Bureau) 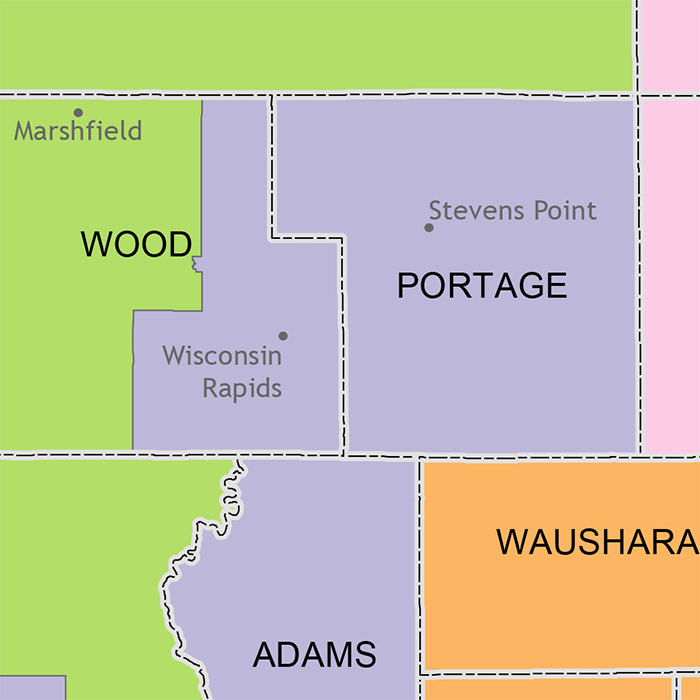 Portage County, a potion of Wood County and Adams County were placed in the 3rd Congressional District in 2011, with surrounding areas allotted to three other districts. (Credit: Wisconsin Legislative Technology Services Bureau)

Hawley said the 2011 change was jarring for locals who considered themselves the gateway to the Northwoods and still watched news on TV stations based in Wausau, which was still part of the 7th district. He said Portage County didn't have much in common with La Crosse.

"Ginseng is big in this area, but La Crosse doesn't have it," said Hawley, adding "our airport is in Mosinee," which is located in 7th district. "Simple stuff like that we were more tied into. None of us go to La Crosse to take a flight."

While nobody is required to use an airport based on the congressional district they live in, Hawley said being in the 3rd meant not seeing their congressman as often.

"If you have a problem, for Ron Kind to get to Portage County it took him three hours to get here. In La Crosse he can talk to people there," said Hawley

When the Republican-controlled state Legislature unveiled their proposed 2021 redistricting maps, the plan for U.S. House seats showed Portage County was to be moved back out of the 3rd and split between the 7th and the 8th Congressional District, which is centered on Green Bay. 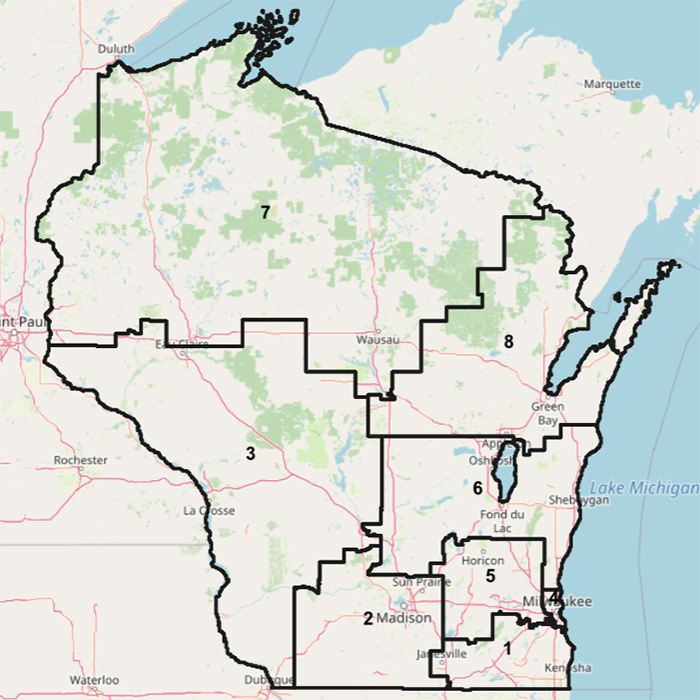 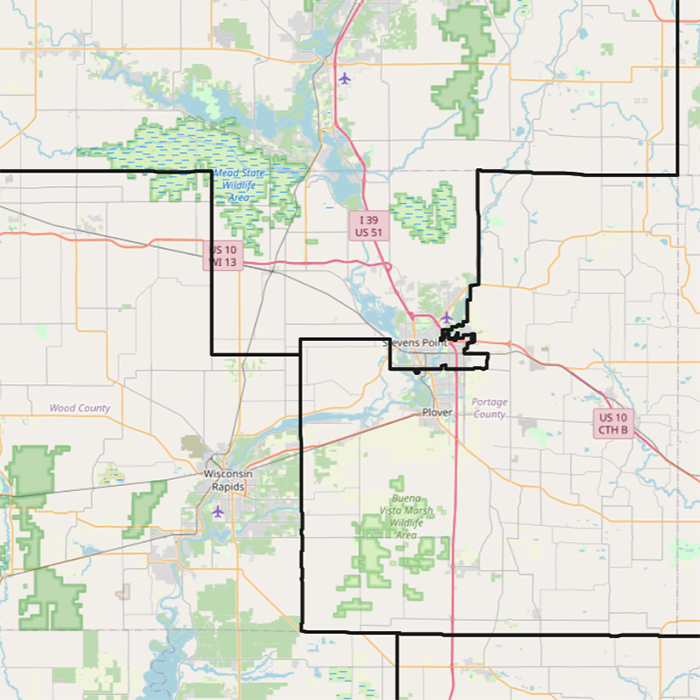 With Stevens Point and points north and west going into the 7th, and Plover and areas to the south and east to the 8th, the split would dilute Portage County's Democratic support between two Republican majority districts. It would also take its Democratic votes out the 3rd, making it more Republican-friendly as well.

The final redistricting proposal from the People's Maps Commission, which was convened by Democratic Gov. Tony Evers, shows Portage County would remain whole, but become part of the 6th Congressional District, which would stretch east to Appleton and Oshkosh. 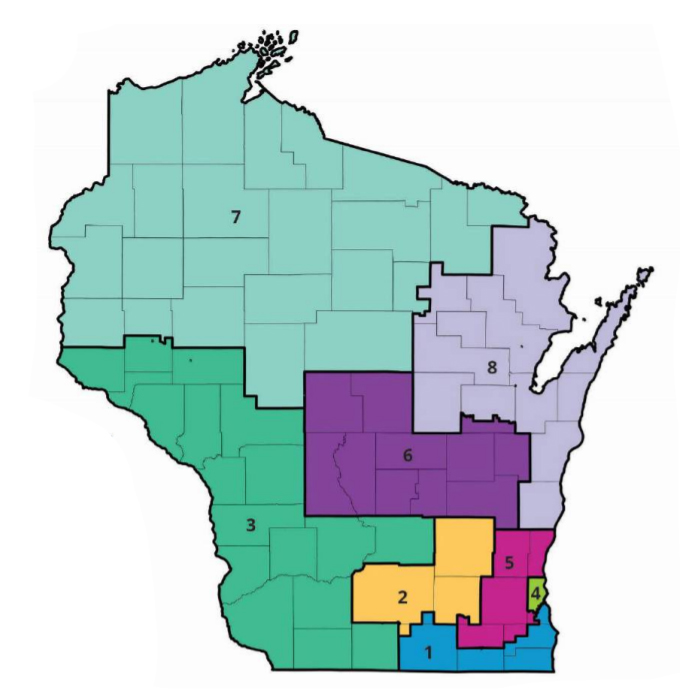 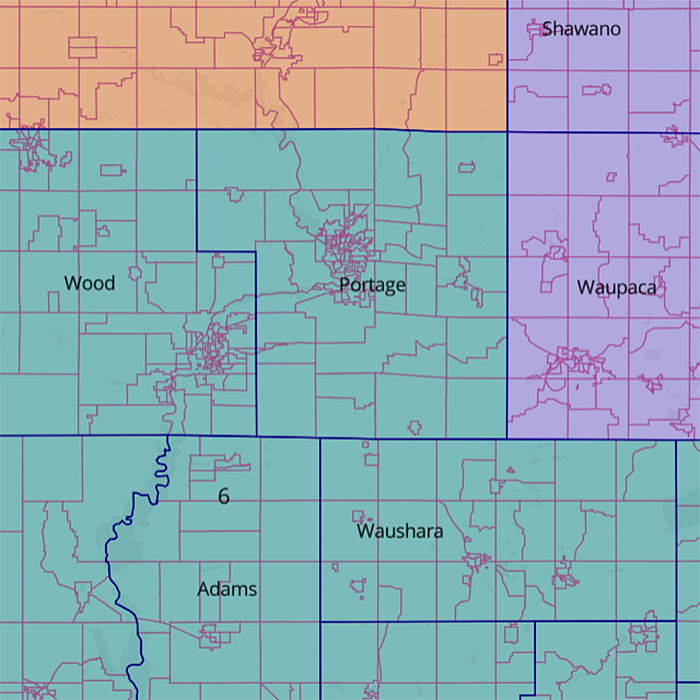 In the People’s Maps Commission’s final proposal for Wisconsin’s 2021 redistricting, Portage County is placed within the 6th Congressional District. Note: The color scheme in this version of the map is different from those used in the statewide version. (Credit: People’s Map Commission)

"At least they didn't split us up," said Hawley, who would prefer the county rejoin the 7th district and Wisconsin's Northwoods. That would mean it would be represented by Republican Rep. Tom Tiffany, who succeeded Sean Duffy.

"We'd like to be back in the 7th, and get it back to a Democrat running the 7th again," he said

The Republican Party of Portage County did not return phone requests for comment. 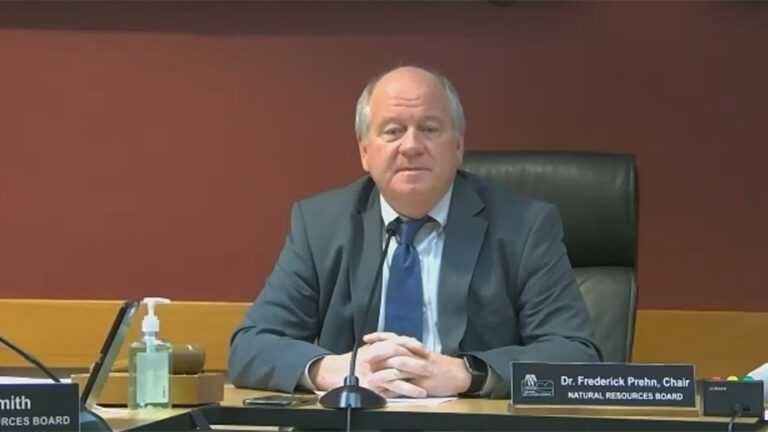 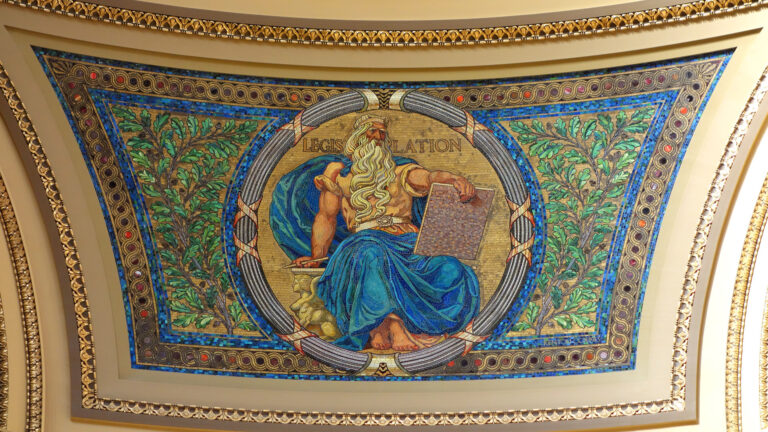 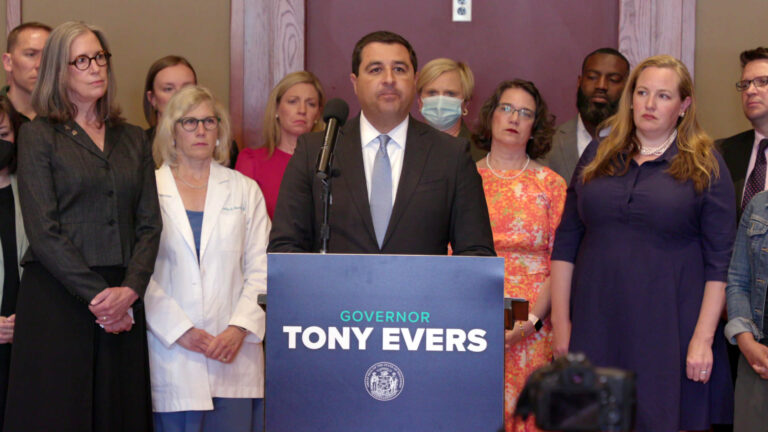 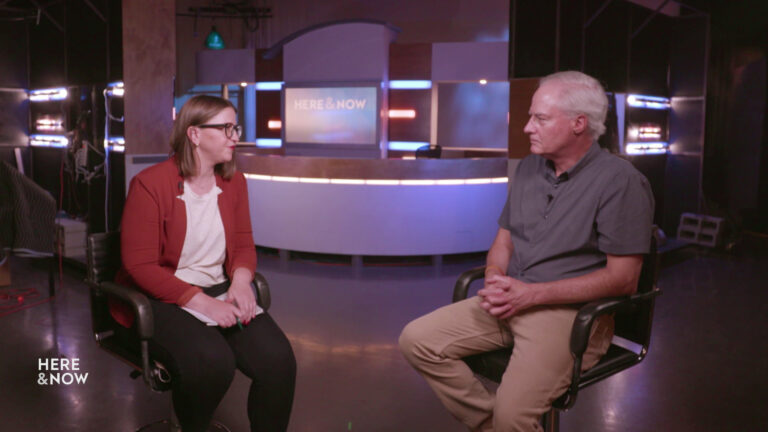 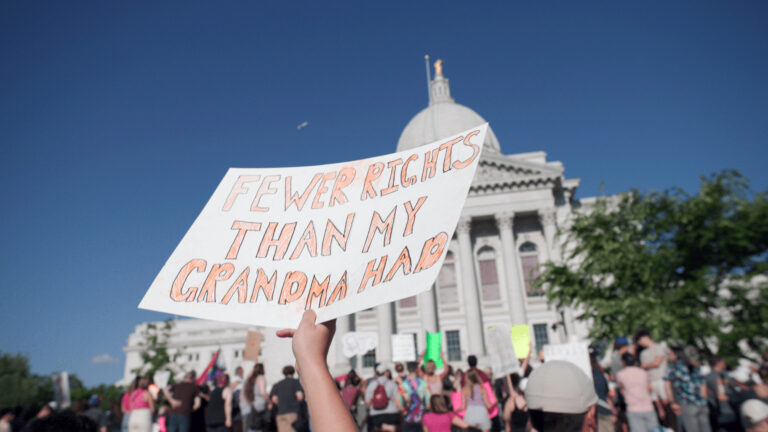