When The Rubber Hits the Road

Working at home while driving 3,000 miles-per-week 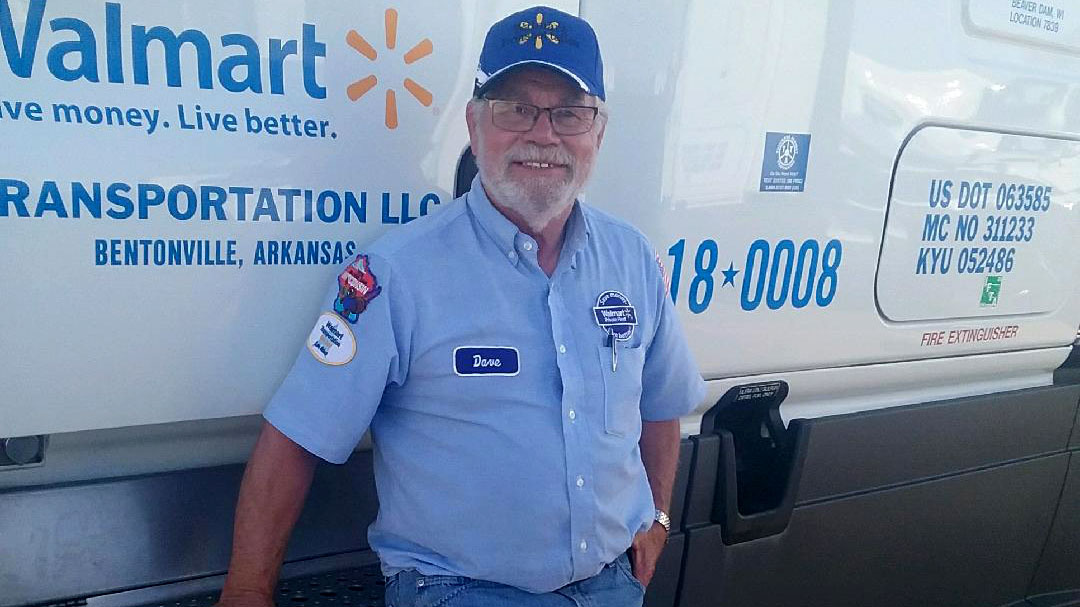 It was a sunny morning eight miles south of Seymour and Dave Skiba had the day off. Three days off, in fact. He drives an 18 wheeler six-days-on and three-days-off for Walmart. But on this morning, the supervisor was in the house. His wife, Wendy, needed those geraniums watered and Skiba was happy to help. That’s what you do when you have a co-worker of 47 years and 10 kids to show for it. One of his daughters, Alyssa Beno, is the editor of the PBS Wisconsin viewers’ guide, Airwaves.

The 6-3 program suits Skiba just fine. So does the truck driving life. He reports to a dispatch office in Beaver Dam. Once there, he said, “I never know where I’m gonna go.” Midwest-based, he may be back and forth to his home during his 6-day shift, or he might be gone the whole time.

“North Dakota one week. Ohio the next. Going to one distribution center or the other. Or, to stores,” he said. “But home means home.”

And, by that he means Walmart makes sure he’s back on that sixth day almost without exception. “They get us back, and on my sixth day, I’m ready for home. I drive 3,000 miles in my six days and 70 hours-per-week with driving and ‘on duty’ time.”

Skiba said the biggest thing he noticed when the world froze at the onset of the pandemic, back when he and other essential workers stayed in motion, was the instant change in traffic volume.

“There was no morning or evening rush hour.” Whether he was rolling past Madison or Indianapolis, “you could go around the beltway and never touch the brake, which is unheard of.”

On-the-job health precautions have been — and continue to be into this week — extremely regimented. His temperature is taken every day on check-in. Masks are mandatory at stops — Walmart or otherwise. He said safe distancing is the norm when his trailer is checked and loaded or unloaded. 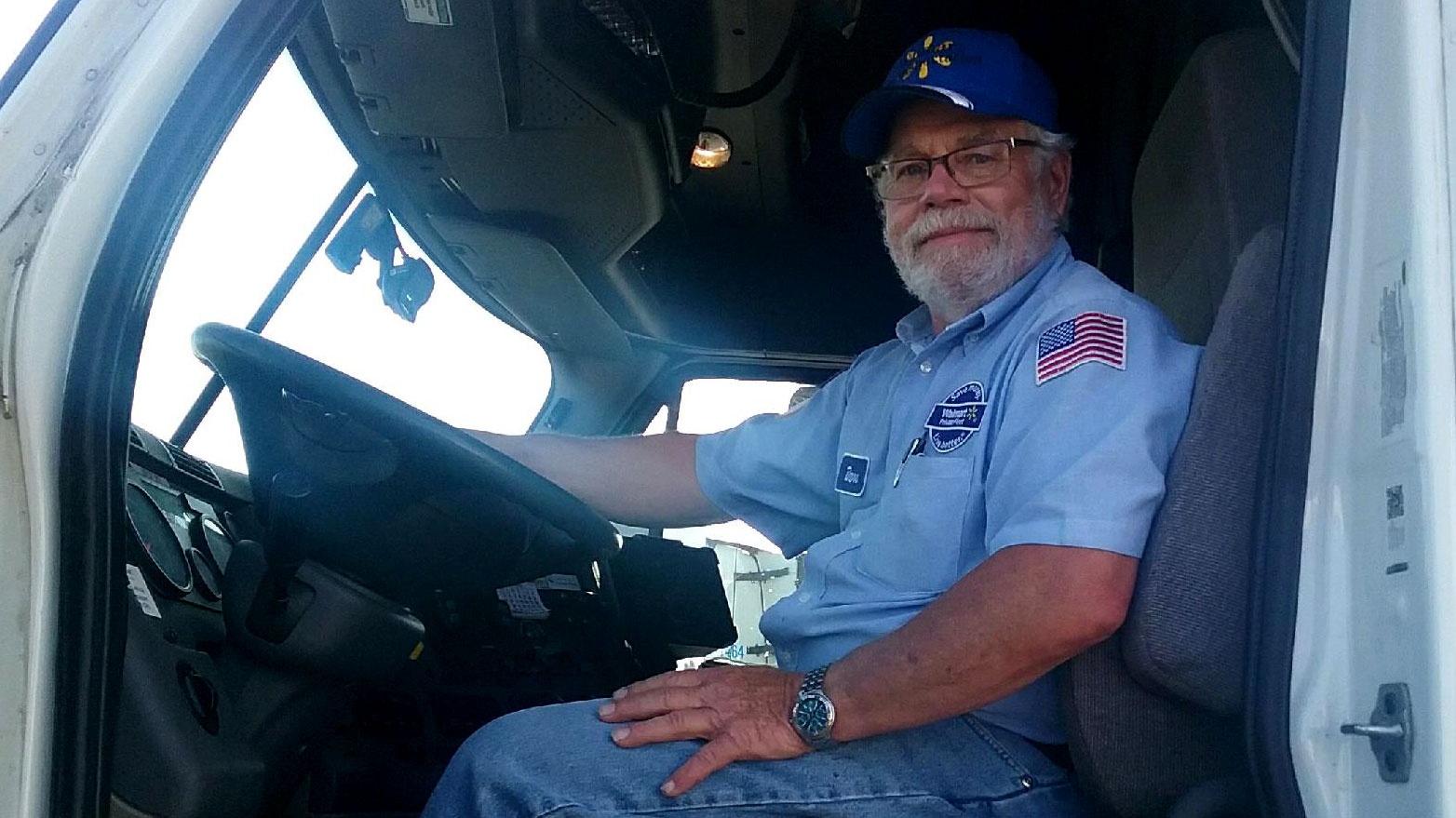 Dave Skiba behind the wheel of his truck. (Photo Rick White)

“There are drivers who complain about getting their temperature checked and everything. But they complain about everything,” he laughed. “One thing about truck drivers, they never run out of complaints.”

As for truck stops, Skiba says the practice of safe distancing depends on the stop.

“I try to avoid the big truck stops, to avoid the crowd where a lot of the guys don’t like the social distancing,” he said.

Skiba appreciates the safe spot of his work — behind the wheel. “I’m always kind of secluded anyway. I’m in the cab 11 hours by myself.”

Still, humans interact, and truckers are perhaps more ready for interaction at the end of the day than the rest of us.

“I always see guys I know, like, ‘there’s the guy from Ohio!’ and they say, ‘hey,’ and they want to shake hands — and I don’t even do the elbow bump.” Skiba said.

Truck stops are a United Nations of sort, a gathering of the greatest minds in America that, “solve the world’s problems” over black coffee and country music. “Now,” he said, “there’s one chair to a table.”

Skiba figures he’s driven over 5 million miles in his career so far. These are the kind of numbers that you’d have to start rolling on right out of high school. Minus two years in the Army in 1972-’74, that’s exactly what he’s done.

He got a head start even before the Army. That’s because his father owned a moving truck when he was growing up in Milwaukee. He started driving for Walmart in 2012. Before that, he, “drove paper and diapers” for Kimberly Clark for 20 years. He also ran as an owner/operator for a time.

According to Skiba, as the world opens up, so, too, are the highways. He said Memorial Day weekend was like the green flag at the Indianapolis 500.

“The people wanted to get out. The campers and boats. Gas stations were doing good but still not the restaurants,” he said.

Trucks, too. Rigs that were sitting idle in lines at the truck stops waiting to fill orders up to last weekend, were no longer there by Memorial Day. From what Skiba says, rows of trucks idling at a truck stop during the bright of day is as ominous a sign of an arrested economy as any tick of paper on Wall Street.

These are mercurial times. This week Skiba’s attention was diverted from the word COVID-19 to the word protest. He was trying to overnight at the Beloit Walmart, having passed through Illinois. He noticed that the parking lot was empty. After parking his truck he began to enter the store and noticed the entrance was blocked off with carts. A line of police fortified the doors. The cops had been warned that rioters were headed that way. They told him they’d try to keep an eye on him and his truck. A Walmart worker drove by and said they’d been evacuated from the store. Skiba felt he was a sitting target, low hanging fruit for looters that may hit the store. He made alternate overnight arrangements at a nearby truck stop, lucky arrangements it turns out, because many truck stops are still capping COVID-19-related capacity.