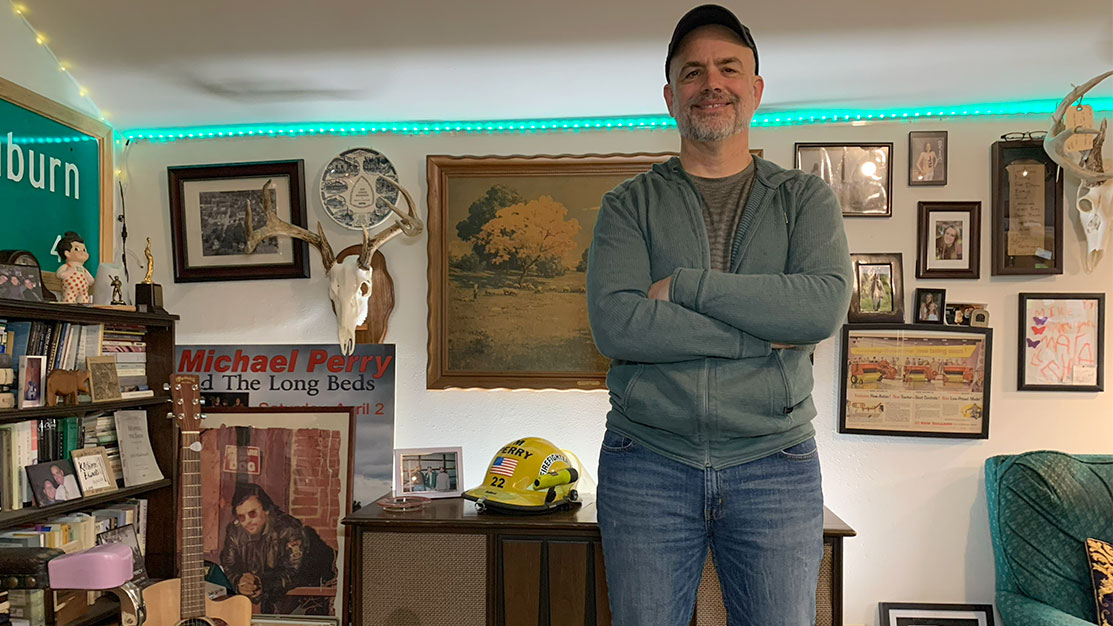 Before he wrote books for a living, Michael Perry worked in healthcare. He put his nursing degree to work as an EMT and eventually as a firefighter. No surprise then that Perry spent a recent morning running down answers related to serum testing for COVID-19 antibodies, critical information, he said, for understanding immunity.

“We have so many people putting themselves at risk to serve the rest of us. If we knew who was immune we could perhaps put them to the front lines. I say ‘perhaps,’ because there’s so much dis-info out there and I’m already talking beyond my area of expertise. I’m just drawing on my background and network to gather info and connect people.”

Once a nurse, always a nurse. 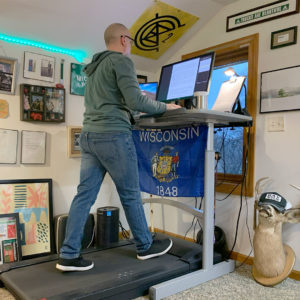 Perry is checking in from his rural Eau Claire County studio above the family’s garage, a space that’s one part music room, one part writing lab, and one part Smithsonian. That is if a wing of the Smithsonian was dedicated to all things Carhartt. The room is chock-a-block with rock posters, farm memorabilia and, “the finless and decrepit stuffed bass caught by my great-grandfather and hung on the wall beside my writing desk.” An item he says, “reminds me that time rolls on. But, just like that bass, you aren’t gonna age well anyway, so have a look around, help where you can, then get back in the swim.”

Perry writes the same way he talks. And he talks just like he writes. He serves up heaping plates of plain English — only with better condiments than most of us have at our disposal. His most recent project is an online attempt to reduce the distance in social distancing. He calls it, “From the Little Writing Room Over the Garage.” It’s a live helping of Perry either singing a song (his folk-rock band, “The Long Beds,” is also on hiatus), telling a story, or reading an excerpt from one of his many books. He posts an episode daily.

A recent edition starts with the trademark Perry nod — a sharp, over-before-it-starts, bow of the head, followed by a grin and a warm, “howdy folks.” As is often the case with Perry, the wind up is nearly as engaging as the pitch. Before stabbing into a story excerpt, he confesses that he can’t find his glasses. Then, he riffs on the absence-of-pride that it takes to appear on camera in his mother-in-law’s blue-rimmed readers. (And, boy does it.)

“I’m just doing a single take, no edit, if I mess up you hear it. It’s not sweeping the nation, but on average somewhere between 500 to 1,000 people check in each day, and the message they send me is they’re grateful for a brief, informal respite from the news of the day. I hope so.” 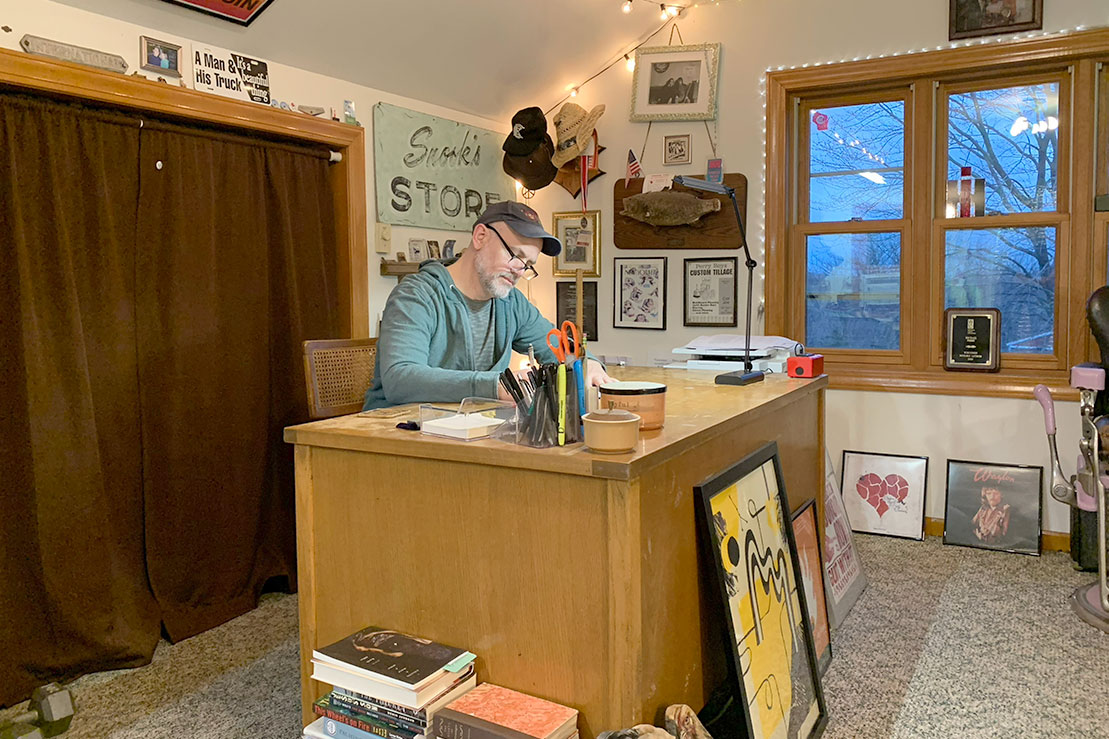 Over half of the Perrys’ household income comes from his book touring, speaking gigs and stage performances. With all that commerce on hold he says the family is newly motivated to keep a lean budget. “Lots of eggs and venison,” he says. Joining in that diet is their college student, now home, retaking her place alongside her younger sister. While her unscheduled presence causes new dynamics in the ebb and flow of life, it’s just one of the variables in Perry’s version of our upside down pandemic times.

“Our elder daughter went from being an independent college student to being cooped up with us again. And I went from being away from home 80 to 100 days a year to in everyone’s face every day,” he said. Perry’s wife transferred from teaching yoga and meditation in a studio to “teaching it over our clunky ‘hinternet.’” Perry frontloads all of this by emphasizing that compared to others during the crisis, he is blessed. Still, he adds, “it ain’t all happy-happy game time. But I’m deeply grateful to my wife and two daughters for the way they’ve been matter of fact about this. We’re a knotty little cluster, but we’re a cluster.”

Having watched Perry percolate within a crowd at a book signing, you’d never know that underneath it all lives a shy guy who’s just as happy to be left alone. Well, nothing like a pandemic to put that desire in perspective. What does Perry miss about life before COVID-19?

“As a guy who has always described himself as a loner, and enjoys being alone, I’d say I underrated the option of gathering up with folks of like mind and spirit. I’d sure love to hear more than four people laugh at once.”