One labor leader says the state's 'right-to-work' law made his union stronger, but others say the laws favor corporations and their CEOs — not workers. 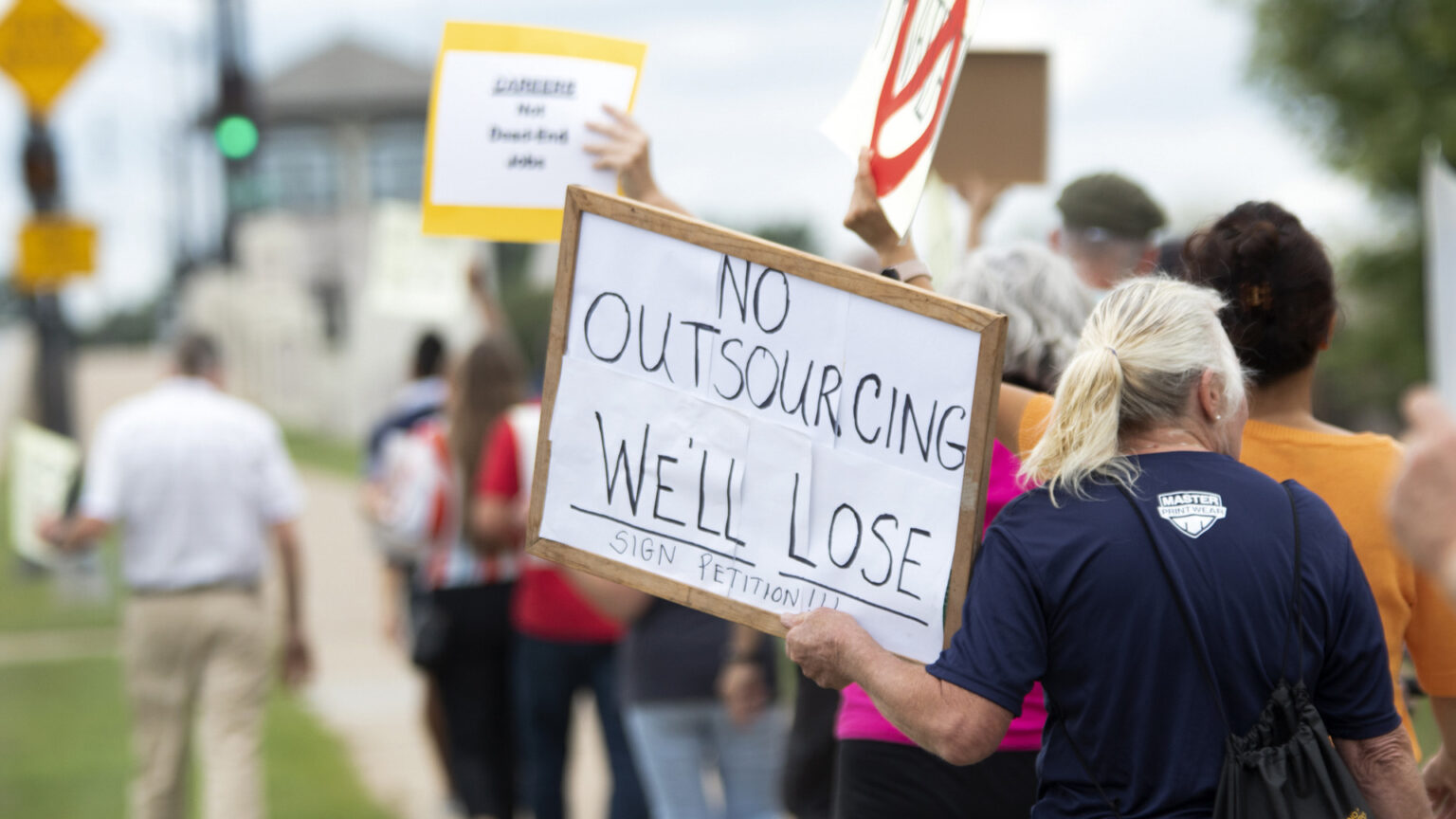 Custodians, grounds and maintenance crews, faculty, staff and others march on the University of Wisconsin-Oshkosh campus on Sept. 6, 2022, to protest the outsourcing of jobs. The effort to contract with private companies for maintenance and cleaning of campus facilities was later scuttled. (Credit: Charlie Bruecker / The Advance-Titan)

Since it took aim at public sector unions in 2011, Wisconsin's Republican-run Legislature passed a series of laws designed to undercut private sector unions and keep local governments from raising minimum pay and working conditions on municipal and county contracts.

Lawmakers also eliminated the requirement that the "prevailing wage" be paid to workers on state-funded construction projects. The biggest change hit in 2015, when Wisconsin became the 25th state to pass so-called "right-to-work" legislation.

The changes, labor leaders and experts say, have caused flattened real wages for construction workers, higher pay for their bosses and local governments stuck offering wages that make it difficult to hire contractors — and hard for those workers to make a living.

Union leaders concede they took a financial hit after the law was enacted. But they say there's new energy now among workers, with strong majorities continuing to financially support their unions — even though monthly dues are now voluntary and the drop in membership hasn’t been as steep as some union leaders had feared

In 2021, there were about 36,000 workers covered by a union-negotiated contract who were not union members. That's about 14% of the total number of employees represented by unions in Wisconsin. In 2015, the gap wasn't that much wider with about 30,000 or nearly 12% of workers, according to the federal Bureau of Labor Statistics.

"I think they've been able to retain the current membership that they have pretty well," David Nack, a professor emeritus at the University of Wisconsin-Madison School for Workers, said of Wisconsin's labor organizations.

Labor organizers say the same things: they've shifted their focus and redoubled efforts to serve their memberships which they can no longer take for granted under "right-to-work" laws.

"I haven't seen a huge effect in construction trades," said Jeff Mehrhoff, a business manager for the International Union of Painters and Allied Trades district that covers more than 2,400 skilled workers in Wisconsin and Michigan's Upper Peninsula. "As a matter of fact, I think it's had the opposite of what I think maybe these other people that are supporting 'right to work,' what they intended."

"It's forced us to want to look internally and maybe make some changes," he added. "It's just made us do our jobs better is what it did." 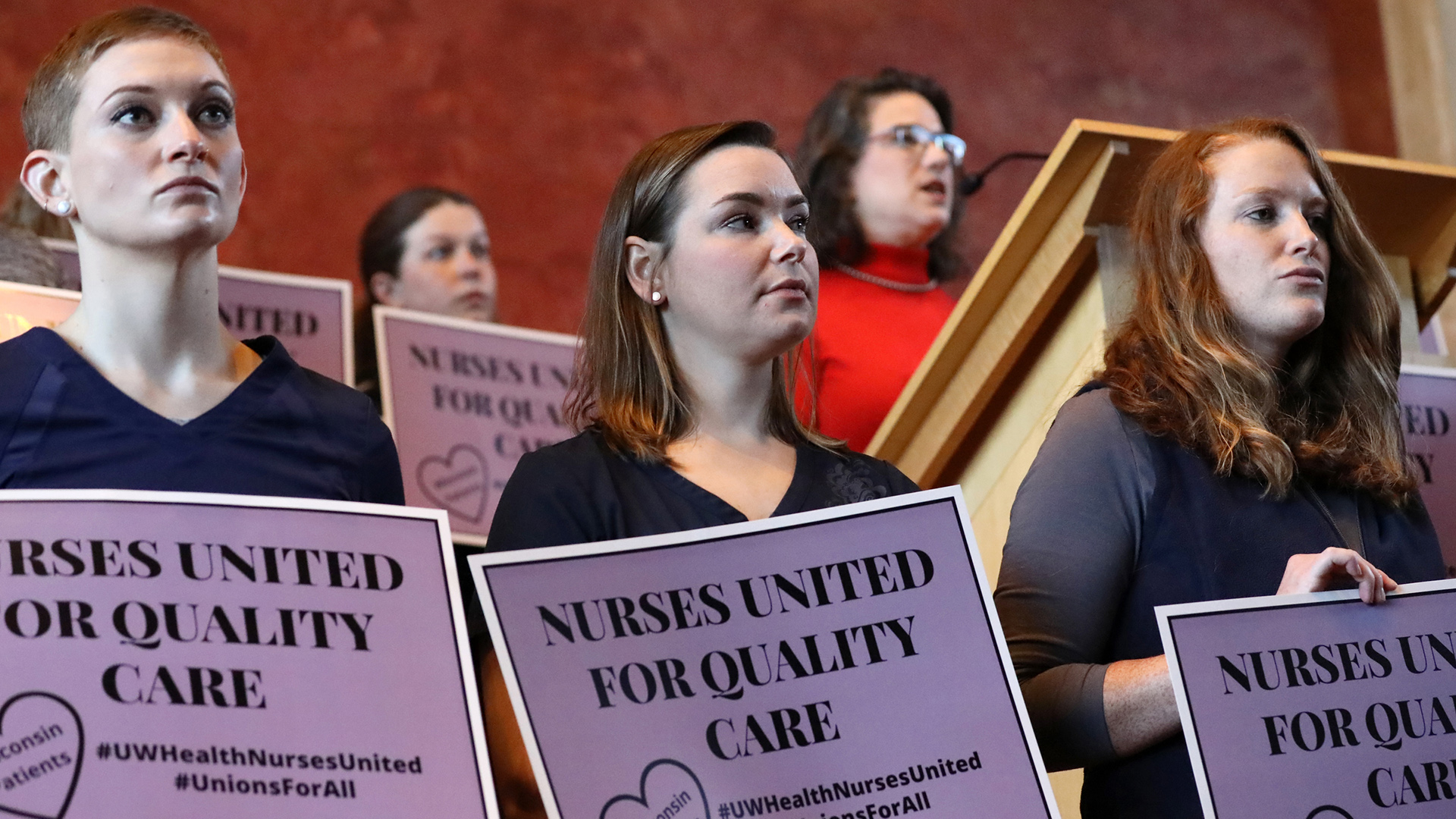 Courtney Maurer, center, is seen with other University of Wisconsin Hospitals and Clinics nurses while they announce a new union during a press conference at the First Unitarian Society in Madison on Dec. 19, 2019. (Credit: Coburn Dukehart / Wisconsin Watch)

Wisconsin Manufacturers & Commerce, the state's largest business lobby, fought hard for its passage, arguing it would create economic growth and new opportunities for the state's economy.

Critics say instead it's had a negative effect on individual workers. Frank Manzo IV, a co-author of a study by the pro-labor Illinois Economic Policy Institute, compared the economies of states with strong collective bargaining laws with so-called "right-to-work" states from 2011 to 2018.

Wisconsin Manufacturers & Commerce declined to comment on those findings or be interviewed. But it did lobby to prevent Gov. Tony Evers, a Democrat, from attempting to repeal "right-to-work" and other Walker-era initiatives in his first months in office.

And while free-market think tanks like the Badger Institute predicted economic gains for ending closed union shops through "right-to-work" laws during the runup to the 2015 legislative vote, they have been relatively quiet since with a dearth of studies conducted since its passage.

Another sweeping change, also pushed by Wisconsin's business lobby, was the 2017 repeal of Wisconsin's prevailing wage law that since the 1930s had required a wage floor for workers on state-funded capital projects.

The MacIver Institute, a free market think tank that promoted the "right-to-work" legislation, also argued that by allowing economic forces to dictate wages, rather than a federal formula, there would be substantial savings on public projects by repealing prevailing wage laws.

That didn't exactly pan out. A labor-linked study analyzed 72 highway projects in Wisconsin and found that, on average, the inflation-adjusted cost-per-mile rose slightly from an average of $3.37 million before repeal of prevailing wage to $3.43 million after repeal.

The result reflects what the nonpartisan Wisconsin Legislative Fiscal Bureau found in 2015 about the potential impact of the law: that existing research and evidence suggested "relatively small effects to no statistically significant effects" in overall costs. 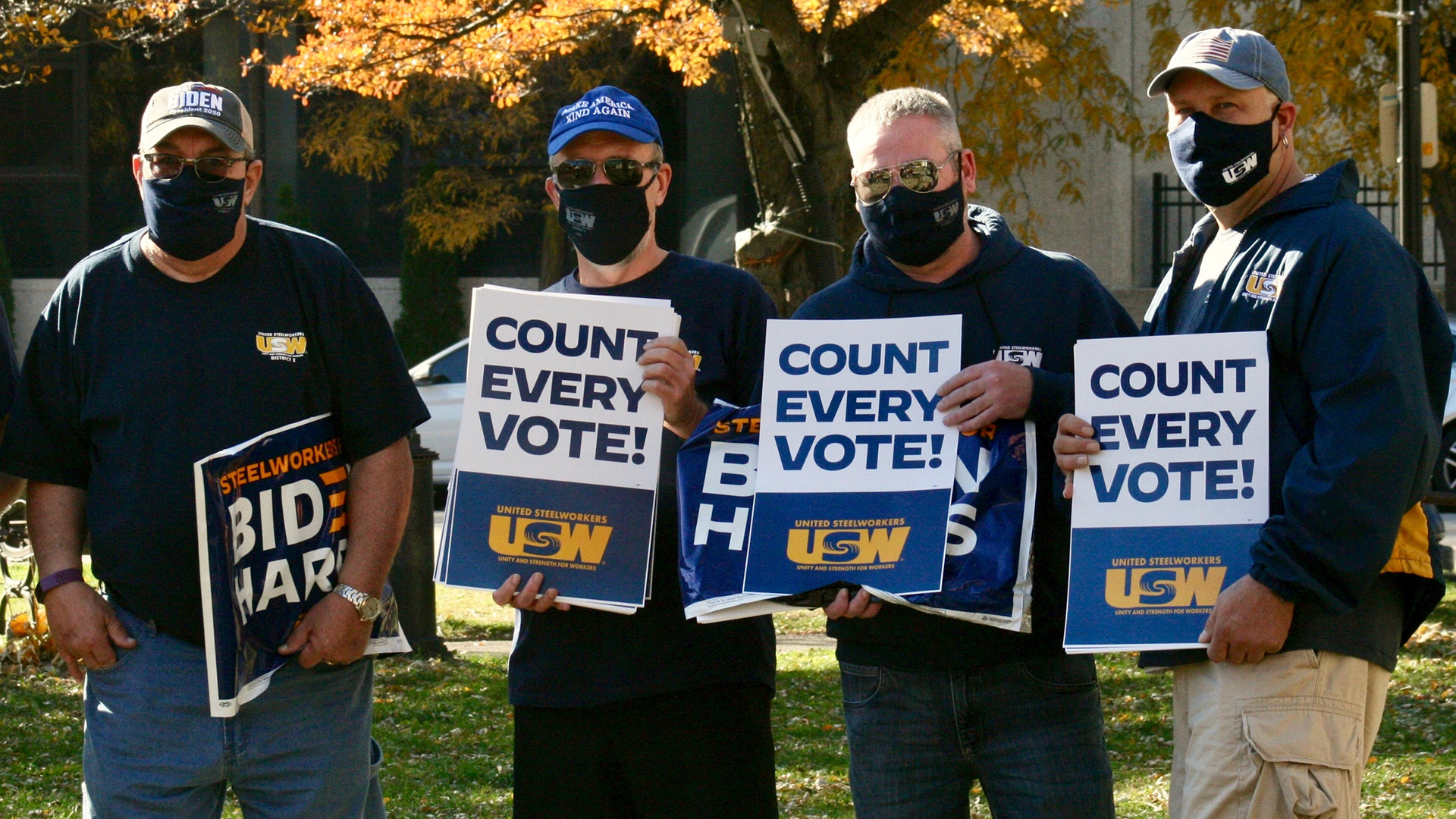 Members of United Steelworkers celebrate the victory of Joe Biden and Kamala Harris victory at Zeidler Union Square in downtown Milwaukee on Nov. 7, 2020. The event was put on by the Service Employees International Union and other organizations. Organized labor was credited in part for Biden's victory. (Credit: Anya van Wagtendonk / Wisconsin Watch)

Supporters of the repeal say the doom and gloom predicted by unions didn't come to pass. Construction employment in Wisconsin has skyrocketed, with federal labor statistics showing around 130,000 workers this year compared with a decade ago when there were around 93,000.

John Mielke, president of the Wisconsin chapter of the Association of Building Contractors, said his largely nonunion membership reports more competition on projects since the repeal of prevailing wage law.

"And we believe that when you have more competition, people are sharpening their pencils and providing more competitive pricing," Mielke said. "Have we done a study to confirm that? We have not; anecdotally, I can tell you that it's true."

"The biggest challenge we have as an industry is we don't have enough people to do the work available," Mielke told Wisconsin Watch. "When you have a shortage of labor, that has a tendency to increase wage rates."

But a study in 2020 by the labor-linked Midwest Economic Policy Institute found that while the sector is booming, the prevailing wage repeal helped funnel much of that wealth toward the top.

When adjusted for inflation, construction workers' average wages in Wisconsin fell by around 5.2% among blue collar workers, while wages fell only 1.7% in Illinois and Minnesota, which have prevailing wage laws.

According to recent Bureau of Labor Statistics data, average weekly pay in the construction industry was $1,104 in 2017. Four years later it would rise by just $121, which didn’t keep pace with inflation, according to the same federal agency. 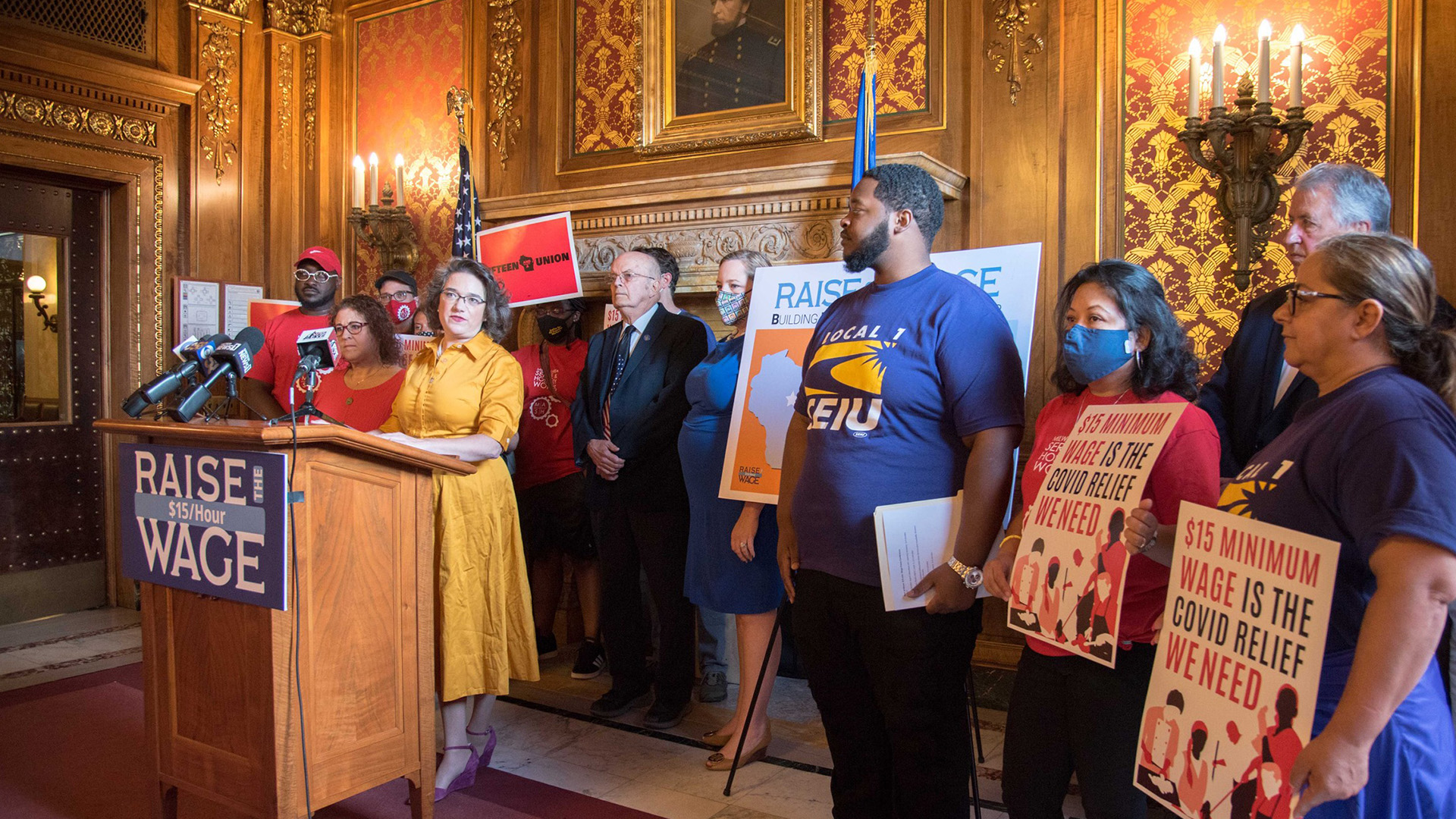 Wisconsin state Sen. Melissa Agard, D-Madison, speaks at a June 17, 2021, press conference with state Rep. Lisa Subeck, D-Madison alongside union members and labor advocates from around the state to announce legislation to raise the state's minimum wage to $15 per hour. That bill failed to advance. (Credit: Will Cioci / Wisconsin Watch)

They estimate that more than 130,000 construction workers cumulatively earned $346 million less than if prevailing wage laws had been in effect. Over the same period, pay for nearly 1,200 construction company executives rose by $111 million.

"The implication is that Wisconsin-based construction CEOs captured 32.1 percent of the drop in labor income and kept it for themselves, contributing to greater inequality in Wisconsin’s construction industry," the researchers wrote.

Mielke, president of the contractors' association, challenged those findings, noting "the vast majority of construction is and has always been private and therefore exempt from prevailing wage."

"Why would a change in a set pay rate for a small section of (the) construction industry result in more money for CEOs?" he asked.

Republicans also have thwarted attempts by local elected officials to impose higher minimum wages for county and city contracts in the state's most populous counties.

Then-Gov. Jim Doyle, a Democrat, negotiated a one-time increase in the state wage in 2005, but the law also prohibited cities and counties from boosting the minimum wage above the state's $7.25 which is now far below what employers routinely offer to entry level workers.

That pattern of state preemption of localities continued with state lawmakers passing laws that prohibit cities including Madison and Milwaukee from requiring contractors on public projects from paying a "living wage."

That was demonstrated in 2017 when Act 327 stopped Milwaukee County from boosting wages not only for county workers but contractors and employees providing county services to $15 an hour by 2021.

"Because the cost of living is higher here than in most parts of the state, Milwaukee residents need higher wages," Milwaukee County Board Chair Marcelia Nicholson said in a statement to Wisconsin Watch.

But the state law made that type of arrangement illegal, and the wage floor remains frozen between about $12 and $13 an hour, which falls below average entry-level pay in Wisconsin, which is above $13. 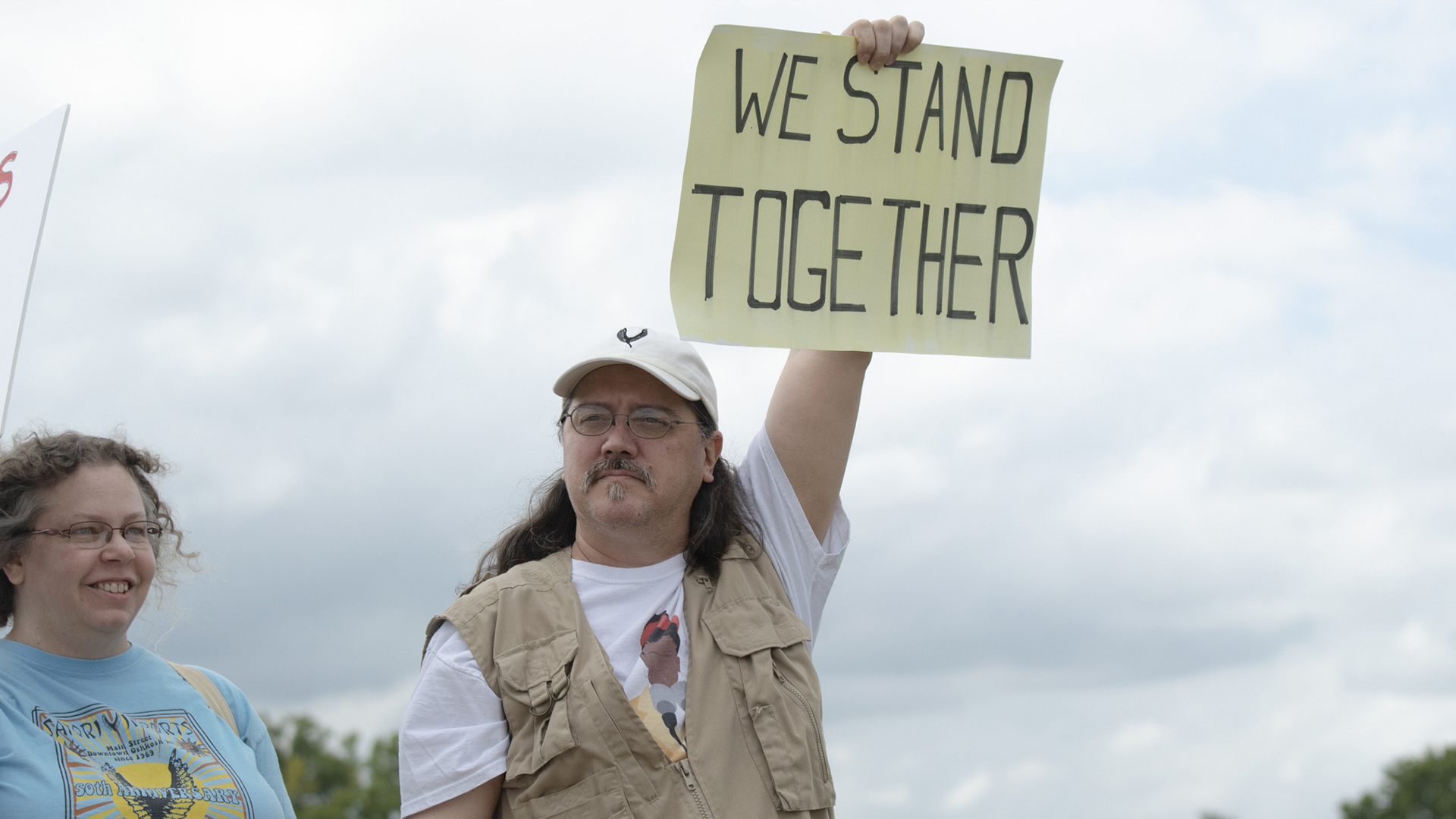 Lori and Bob Knudsen march to keep the University of Wisconsin-Oshkosh from outsourcing custodial, grounds and maintenance jobs to a Tennessee-based firm. Joining the Sept. 6, 2022 protest were affected employees, faculty, staff and others. (Credit: Charlie Bruecker / The Advance-Titan)

With workers in short supply, hourly wages rose $2 (adjusted for inflation) between 2018 and 2021. Despite the gains, racial and gender disparities persist, a report by the Center on Wisconsin Strategy (COWS) at the University of Wisconsin-Madison found.

Women of all races have made gains, though, and in the past 42 years the gender disparity has been largely supplanted by a racial one, the report found.

"The distance that black and brown workers are from white workers in terms of wages is substantial," COWS associate director Laura Dresser, a labor economist, told Wisconsin Watch.

Lawmakers also did away with project labor agreements in which public entities negotiated working conditions on public projects. In the name of harmonizing labor laws across the state, Act 327 bars local governments from setting wage, hour and hiring standards — even voluntary ones with developers.

Nicholson told Wisconsin Watch that local leaders resent being repeatedly preempted by state lawmakers when they try to raise the standard of living for their residents.

"It was incredibly disappointing (to) lose the gains achieved for Milwaukee County residents because of decisions made by people who do not live in this community," she said.

"Right-to-work" laws: In 2015, Wisconsin became the 25th state to adopt legislation that allows private sector workers to decide whether to pay union dues. Under federal law, unions must represent all employees in a workplace. As a result, "right-to-work" laws allow employees to receive the benefits of negotiated contracts and union representation in employment disputes without having to pay.

Jacob Resneck is a Report for America corps member. The nonprofit Wisconsin Watch collaborates with WPR and other news media and the University of Wisconsin-Madison School of Journalism and Mass Communication. All works created, published, posted or disseminated by Wisconsin Watch do not necessarily reflect the views or opinions of UW-Madison or any of its affiliates. 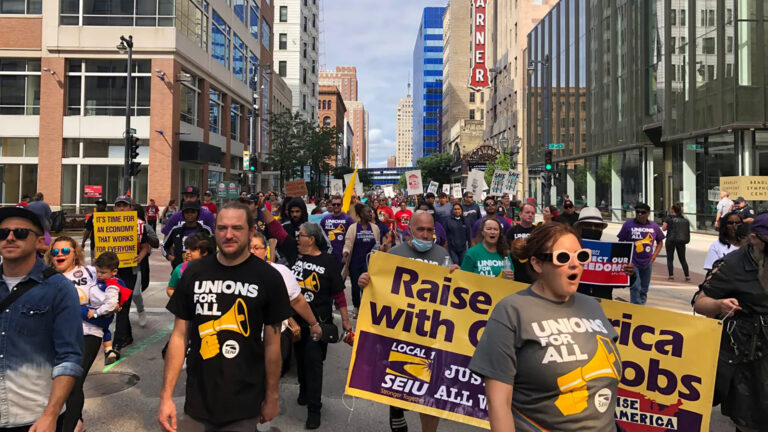 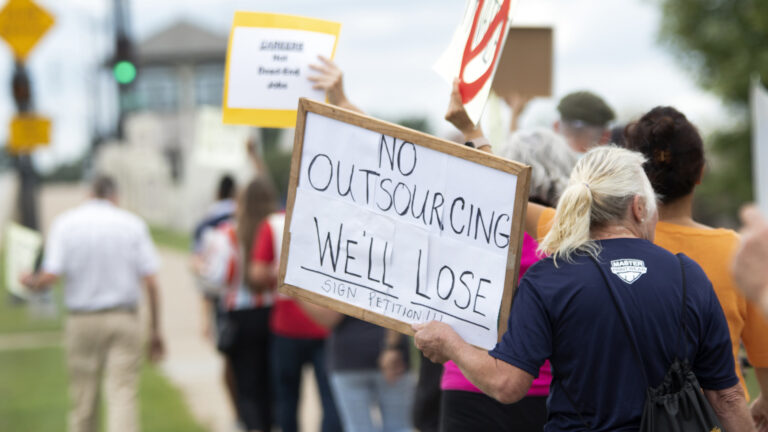 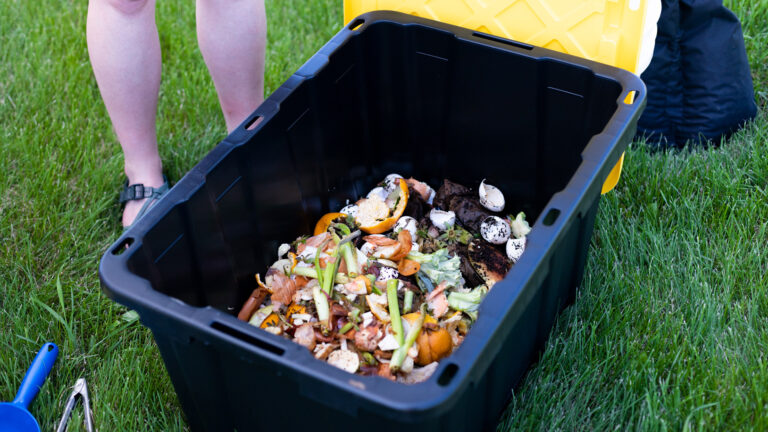