Here & Now Extra: During national Black Maternal Health Week, Wisconsin researchers and advocates shed light on the crisis of Black maternal and infant mortality and return to solutions that have historically been a part of the birthing process in the Black community. 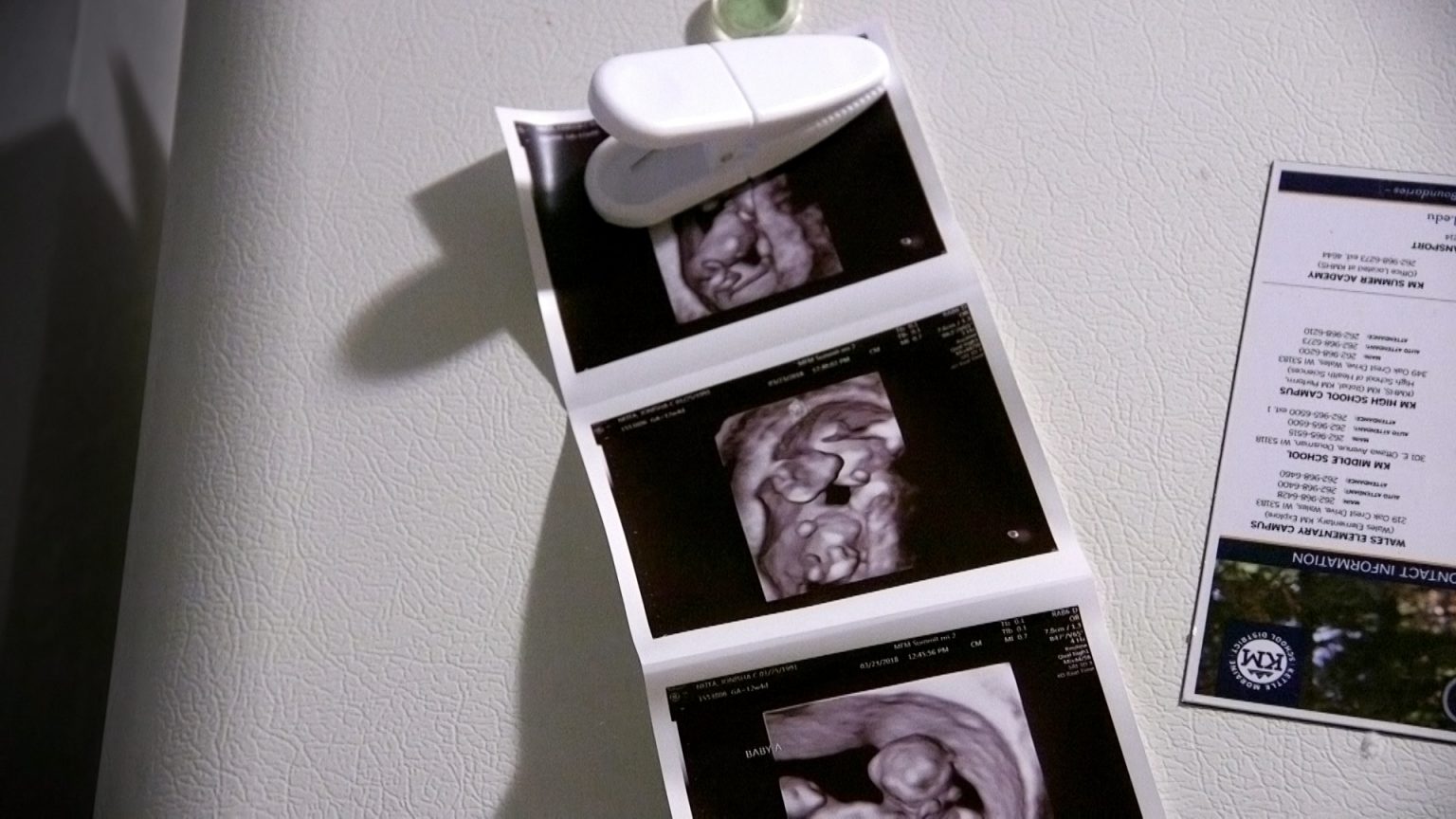 The national spotlight on Black Maternal Health Week focuses attention on a problem that Black mothers in Wisconsin have long understood. That's because Wisconsin ranks at the bottom in the rates of death and complications for Black mothers and babies compared to their non-Hispanic white counterparts.

"The health of Black women in Wisconsin is in a state of emergency," said Lisa Peyton-Caire, founding CEO and president of the non-profit Foundation for Black Women's Wellness based in Madison. "That's best measured by our maternal health outcomes right now. So this is a pivotal time to elevate this issue, to amplify what it means for Black women in our community and state to command and demand accountability and investment and change in these outcomes."

Dr. Jasmine Zapata, an assistant professor and researcher at the University of Wisconsin School of Medicine and Public Health, not only studies the issue, she's lived it.

Zapata was almost six months pregnant with her second child more than a decade ago, when one day she knew something was wrong.

"Twenty-five weeks into my pregnancy, I suddenly started having a sharp pain in my lower abdomen as I walked to class. I was in medical school, actually," Zapata said in a Here & Now Noon Wednesday interview on April 14.

When the pain kept coming, Zapata called the doctor's office and was told she was just having false labor.

"For almost three hours I called over and over again, and I was just kind of dismissed. But then there was a change and I knew that this was an emergency," Zapata recalled. "Within two hours I had my little baby girl. She was born only one and half pounds."

After three months in the neonatal intensive care unit, and multiple surgeries and interventions, Zapata brought her daughter home. But her experience on that day her daughter was born has led her to dedicate her career to helping other Black mothers and babies, and to shine a light on inequities in the health care system.

"We really need to be looking at this from a social determinants of health standpoint," said Zapata.

Social determinants of health are the conditions in which people live, work, study and recreate that affect their personal health and quality of life, including their access to education, job opportunities, safe housing and nutritious food. These and other factors — including racism — can have an impact on a child's well-being, beginning before they are even born.

"We can't wait until a Black woman is pregnant to start intervening and giving her support," said Zapata. "We need to be looking at a life course perspective from the moment a young Black baby girl is born, we need to be supporting her."

Wisconsin has held the moniker of worst-in-the-country for Black infant mortality for many years, but that doesn't mean people haven't been working on the issue.

"There have been many, many efforts over many years to address the poor birth outcomes that Black women experience, but they've been Band-Aid approaches," said Peyton-Caire.

These approaches include making sure women have information on eating healthy, getting to appointments, or just access to basic care. These are all important, but there are also larger forces at play.

"We have to look at the bigger picture of root causes, social and structural determinants of health, which are those economic and social factors like racism and how it shapes the way we experience systems and opportunity in our state, how it shapes who's housed and who's not housed, who has access to food, who doesn't, who has living wage employment, who doesn't," Peyton-Caire said.

Often, the choices people make are blamed for the outcomes, but health researchers say that's like treating a symptom without addressing the underlying condition.

Health researchers say the social and structural determinants of health cannot be disentangled from race because race was baked into how American institutions were built and how policies were formed.

"We don't have disparate birth outcomes in Wisconsin because of individual behavior, but what we do have is one of the most segregated cities in the United States: Milwaukee," said Dr. Tiffany Green, assistant professor of population health sciences and obstetrics and gynecology at UW-Madison.

The city of Milwaukee declared racism a public health crisis in 2019. Since then, the idea of racism as a public health issue is being recognized by state officials and one of the country's top health agencies: the Centers for Disease Control and Prevention.

Although it took a pandemic to be officially acknowledged, the CDC's director, Dr. Rochelle Walensky, released an April 8 statement calling racism a serious public health threat.

"The pandemic illuminated inequities that have existed for generations and revealed for all of America a known, but often unaddressed, epidemic impacting public health: racism," Walensky wrote.

Advocates in Wisconsin say increasing awareness about the role of racism in public health must lead to action.

"That awareness needs to translate into real solutions and policy and practice changes that address and close those gaps," said Peyton-Caire. "Because that translates into lives being saved."

Research still in its baby stages

For example, a 2016 paper by researchers at Michigan State University shows how socioeconomic status affects infant mortality across racial and ethnic groups.

"This is not just a Black and brown issue. If we look at rural communities across Wisconsin as well, low-income white women are quietly experiencing similar outcomes. It is an issue impacting everyone in our state," said Peyton-Caire.

While infant mortality is impacting many races, incomes and lives in Wisconsin, Black women are experiencing it most acutely.

"College educated Black women have almost twice as high of a chance of having an adverse birth outcome or complications in their pregnancy compared to white women who are high school dropouts," said Zapata.

Research on how a person's birth, health and quality of life are impacted based on the social and structural determinants of health has already illuminated many inequities, but social scientists have more work to do in understanding the complex issue, according to Green.

"There are a lot of us that have been thinking about structural racism and trying to capture that. And defining exactly how that is contributing to birth disparities is exciting work, but it's still in its baby stages, for lack of a better term," Green said.

For Peyton-Caire, who works directly with mothers, the pain is that much worse when babies are making it to their full term but dying before reaching their first birthday.

"The worst way of experiencing that data is when we get a call from a woman in the community, within our network or who we serve, and we hear about the deaths," Peyton-Caire said. "We've watched this woman carry this baby. We've seen the excitement around the pregnancy. We've seen the family preparing to welcome this child. This child is born. This child is held. And then this child's funeral is being planned, a tiny infant months later.

Listening to the voices of Black women

Another emerging area of research points to the chronic stress brought on by Black mothers simply living within a society filled with implicit and explicit racism.

The culmination of chronic stress and adverse experiences is referred to in medical terms as the allostatic load. And research shows that Black Americans have higher allostatic loads adversely impacting their health.

Zapata calls it "the experience of being a Black woman in America over time."

"More and more research is correlating that to the stress that mothers, Black women, are holding in their bodies. That is impacting the quality of their pregnancies," said Peyton-Caire. A 2019 report from the Foundation for Black Women's Wellness shows just that.

Researchers emphasize social scientists need to understand the issue in a way that highlights people's experiences in their own words.

"We need the voices of folks in the community and we need to center them," said Green. "And this is not just about a justice issue, it's a scientific robustness and rigor issue. We need to understand the data that we're seeing. We need to understand the context in which it was collected and we can't do that without the voices of the people in the community that are being affected."

Zapata added: "Listening to Black women. It is pretty simple."

Additionally, researchers are looking at who is listening.

A 2020 study of patient experiences in Florida hospitals found that Black babies cared for by Black doctors had rates of mortality cut in half.

Green says there are studies that look at implicit bias in the health care field.

"Unsurprisingly, just like the general population, doctors are biased," Green said, adding that trainings around implicit bias are inadequate to address this and don't show any long term positive impacts.

That's where a push for doulas and greater cultural competency comes in.

"To be culturally competent matters in any form of medical care," said doula Tracy Russel in an April 14 episode of PBS Wisconsin's Why Race Matters. "And I feel as though that's so much more important that we get back to because our mothers and children are dying and it's not making news."

"This is really a part of our culture, our history, our tradition, particularly in the Black community of how Black women have always led in our birthing stories," said Peyton-Caire.

Doulas are certified and trained to work with mothers directly during pregnancy, from the early stages until after birth.

"What we're seeing in the research is that women who have the support of doulas throughout their pregnancy, or even a portion of their pregnancy, experience fewer complications at birth, there's fewer outcomes where a baby is lost, and the mother experiences better health outcomes overall," said Peyton-Caire.

For Zapata, awareness and action has to come from all sides of society.