The number of new COVID-19 cases and hospitalizations across Wisconsin is growing rapidly as the holiday season begins for a second consecutive year, and health officials continue urging people who aren't vaccinated to do so to protect their loved ones and stave off more crisis conditions in hospitals. 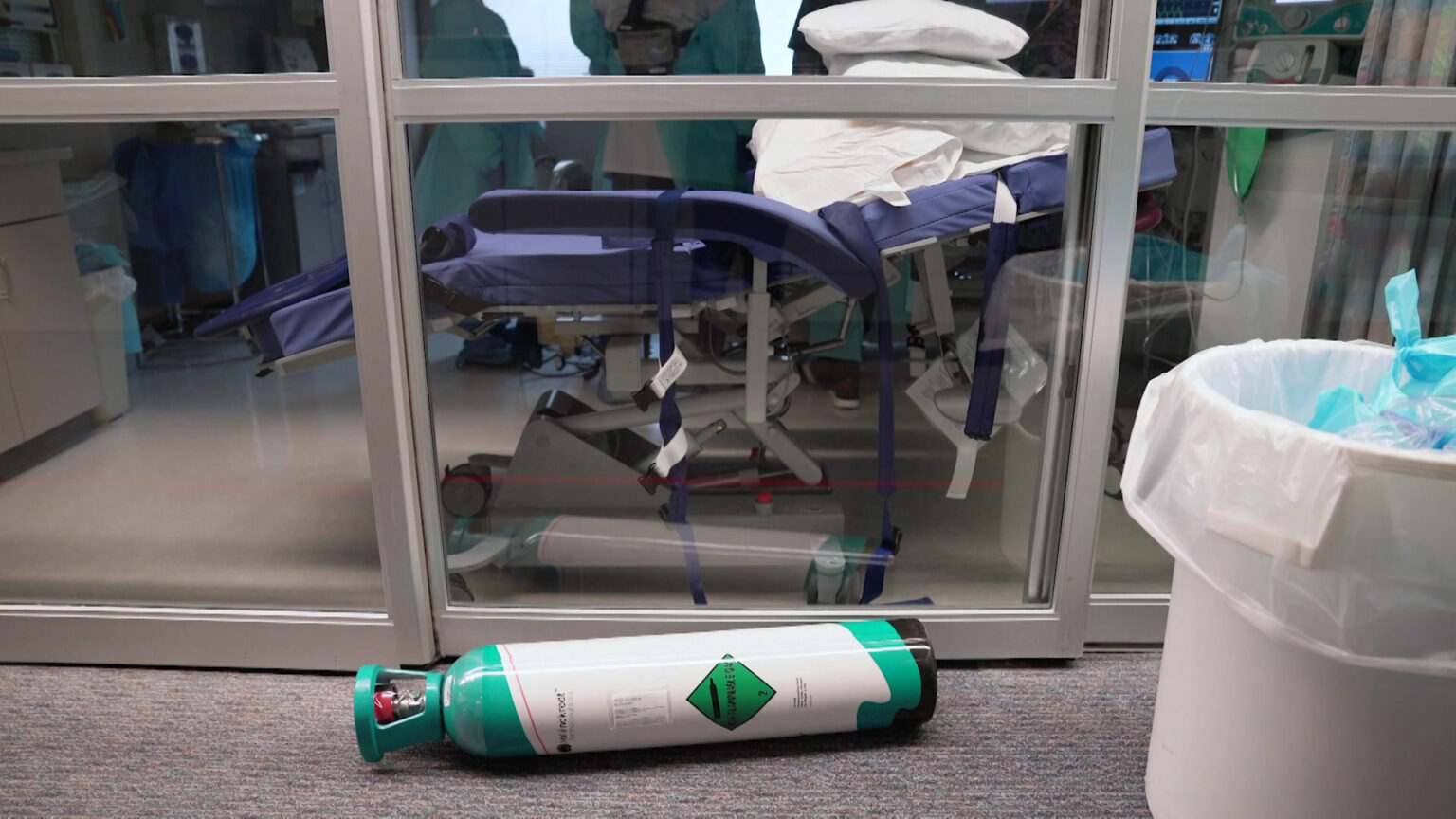 An oxygen tank sits discarded on the floor of a Marshfield Clinic ICU ward in September 2021. (Credit: PBS Wisconsin)

One year after Wisconsin endured its worst surge of the COVID-19 pandemic to-date, the number of people hospitalized for the disease across the state has reached its highest level for 2021. As of Nov. 18, the Wisconsin Hospital Association reported 1,223 covid patients were in hospital beds throughout the state, its highest number since late December 2020, when that year-end wave was abating.

Public health officials are warning that the window to avoid a repeat of the hospital crisis a year ago is narrowing just a week before Thanksgiving. Here's the status of the COVID-19 pandemic in Wisconsin.

"Many of our hospitals are operating at their full capacity or will be up to capacity in the near future," said Dr. Ryan Westergaard, state epidemiologist for communicable diseases, during a Nov. 17 media briefing.

Westergaard said the path toward minimizing the impact of another full-blown health care crisis is clear: safely increasing immunity through vaccination and booster shots.

"We need everyone who's not vaccinated to get the COVID-19 vaccine," Westergaard said.

As for boosters, he noted that while the state health department is not yet officially endorsing booster shots for all adults, vaccinators should not decline a booster to adults who consider themselves eligible.

Wisconsin's official booster guidance mirrors federal recommendations. As of mid-November, those recommendations are that people 65 and older should get a booster dose while other adults who work in high-risk settings or who have certain pre-existing medical conditions may get one. Westergaard said it is up to individuals to determine their eligibility for a booster shot, not vaccinators.

"If people make the determination that their risk is elevated and [they] want to get a booster, our recommendation is they can get a booster," Westergaard said. "We should trust people's self-assessment of their risks."

Nearly a year after health care workers were the first Wisconsinites to start getting vaccinated, Westergaard pointed to clear evidence that the COVID-19 vaccines are the best way to avoid SARS-CoV-2 infection, as well as subsequent serious disease that can lead to hospitalization or death.

Around 3,000 people have been testing positive for covid in Wisconsin most days since the start of November. After dipping for a few weeks, new cases started growing again and are outstripping the pace of infections in mid-September, when the wave caused by the highly contagious Delta variant hit an initial peak in the state. New cases show no sign of abating.

While some cases are among fully vaccinated people, these breakthrough infections tend to be milder and continue to represent a relatively small share of the state's caseload. The Wisconsin Department of Health Services reported new data on Nov. 15 showing that in October, as the Delta variant dominated transmission, case rates among unvaccinated and partially vaccinated Wisconsinites were five times higher than rates among those who were fully vaccinated.

As of the beginning of November, just 55% of Wisconsinites were fully vaccinated. That's according to data reported by the state health department, which hasn't been updated since Nov. 5.

During the Nov. 17 media briefing, Traci DeSalvo, director of the agency's bureau of communicable diseases, said new figures would not be reported until it was confident that data errors arising from Walgreens vaccination records were resolved.

"We hope to have those updated numbers available for you very soon," DeSalvo said, adding that updated reporting would include data on the number of children ages 5 to 11 getting vaccinated, along with the number of booster shots administered in the state.

DeSalvo said "tens of thousands" of kids in the newly eligible age group had already received their first dose of Pfizer's pediatric vaccine by mid-November. Around 550,000 booster shots and additional doses had been administered so far across the state, she added. (An additional dose is considered part of the primary vaccination series for immunocompromised people.)

Meanwhile, the number of counties experiencing "critically high" case activity doubled over the first half of November from eight to 16. Counties with the highest rates of transmission were concentrated in the northwestern part of the state along the Minnesota border, though several counties in central and northeast Wisconsin have also had critically high activity.

All other counties in the state were experiencing "very high" case activity over the same period, with only two counties experiencing shrinking case rates: Kewaunee and Marquette.

Across the entirety of Wisconsin, there were just 69 open ICU beds on Nov. 18, representing about 5% of the state's ICU bed capacity. Even fewer intermediate care beds — a step down from ICU care — were immediately available, with just 27, or about 2%, of all such beds in the state open.

Hospitals were more squeezed in some parts of Wisconsin than others. There were zero ICU beds available across a 22-county swath of northwest and north-central Wisconsin, including Eau Claire, Superior and Wausau.

While Westergaard said hospitals are designed to operate with patients occupying a majority of beds at any given time, they are not meant to be at or near capacity for weeks on end.

"That occupancy rate has gone up in lockstep with the increase in covid disease activity," Westergaard said. "We're also hearing anecdotally that in certain regions of the state it's getting hard to find beds for patients."

Wisconsin's largest 2021 surge is coinciding with the beginning of the holiday season, when seasonal respiratory viruses like influenza are typically on the rise.

Noting that it's a "safe assumption" covid would likely follow similar seasonal patterns going forward, Westergaard said Wisconsinites should practice caution at their holiday gatherings, make sure they're vaccinated for covid and the flu, and stay home if they're not feeling well. Doing so would help protect hospital capacity and minimize the burden on an exhausted health care workforce, he said.