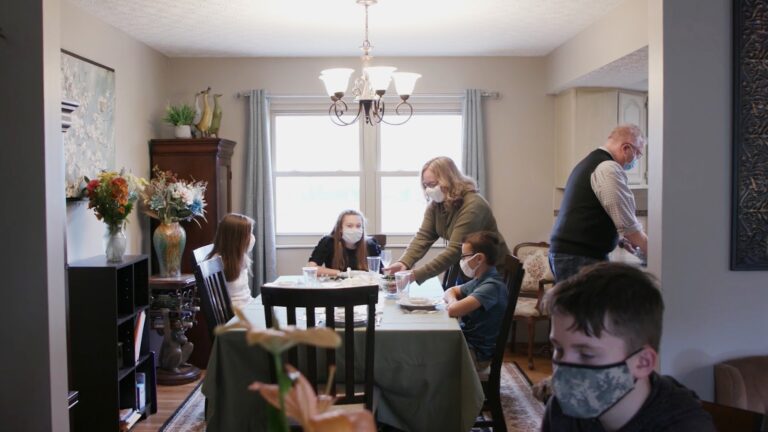 In the days leading up to the Thanksgiving holiday, public health officials locally and nationally are still delivering the same message: stay home. What has changed is the urgency with which they are conveying it.

“We’re seeing such a surge in cases with the holiday season among us. You really need to be aware of yourself and where you’ve been,” said Sara Lornson, a De Pere public health nurse and contact tracer.

“I’m concerned about the very immediate future of the next few days,” Dr. Anthony Fauci told the PBS NewsHour Monday. “We’re in the middle of a very serious situation.”

Last week, Wisconsin saw its deadliest week of the virus, surpassing 3,000 total deaths. On Tuesday, the state hit a new record high of 104 deaths in a single day. A model indicating the state’s projections show the death toll could reach 5,000 by the end of the year.

“The consequences of failing to act will continue to be devastating and deadly,” an executive order recommending staying at home from Gov. Tony Evers stated.

Still, the increase in warnings may not be enough of a deterrent for many not to stay home.

“It’s a difficult choice because we are so tradition oriented and all of us do better with routine and structure and consistency,” said Lisa Tutskey, a marriage and family therapist with Prevea Health. “It can be difficult to let go of those traditions and to not do those things because we are missing the connection of others as we’ve endured this for the last eight to nine months.”

A national survey indicated nearly 40% of Americans planned to gather with more than 10 family members. TSA data indicates that the number of people flying is less than half of last year’s record flights.

The Centers for Disease Control state the safest way to celebrate the holiday is to only get together with those who live in your household. However, for those who are traveling or congregating, there are a number of considerations to take into account such as where people are coming from and traveling to, exposure during travel, and safety measures during the gathering itself.

The president and CEO of the Wisconsin Hospital Association warned of the strain health facilities are already enduring, including critical staffing shortages, and the “catastrophe” on the horizon.

In a recent interview, chief health officer of Marshfield Clinic Health System William Melms expressed concern for the physical demands, turnover and emotional trauma that staff are currently dealing with and what an additional surge could mean.

“We feel like we’re in a little bit of an eye of the storm right now, but we will be on the leading edge of that storm within one to two weeks after Thanksgiving,” Melms said.

For De Pere public health nurse Sara Lornson, it’s the unpredictability of who is spreading the virus and how the disease could affect someone that makes COVID-19 so dangerous.

“I think what has surprised me most throughout this pandemic, talking to different people, is the variety of symptoms,” Lornson said. “You may have mild symptoms or no symptoms at all, and then you may be the person that has severe symptoms. This virus does not discriminate against age, gender, ethnicity. You’re playing roulette with this virus.”

Asymptomatic carriers are especially concerning for public health officials because they are still contagious and can still spread the virus unknowingly. Additionally, a negative test doesn’t guarantee that someone is in the clear and safe to gather.

“One test is really just a snapshot in time,” Lornson said.

Public Health Madison Dane County does not recommend testing just for “peace of mind” or to get a green light to gather with others.

Last week, PHMDC issued an order banning indoor gatherings of any size except with those within your own household as officials were anticipating the holiday rush. The order has already been met with a legal challenge.