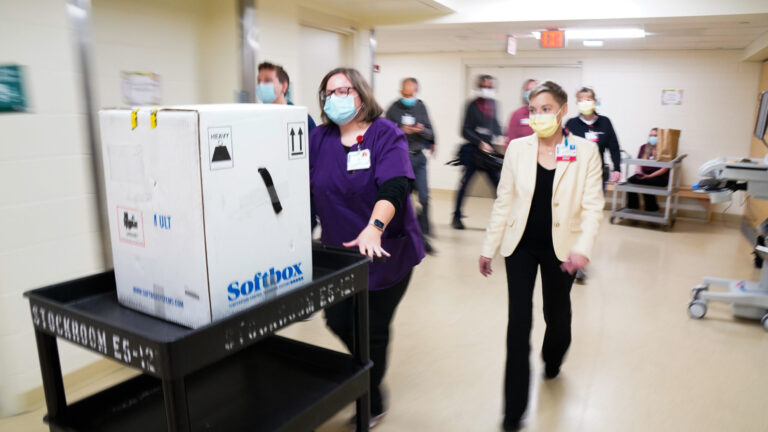 Gov. Tony Evers, along with the state Department of Health Services, announced Thursday a new smartphone app will be available starting next week to help COVID-19 contact tracing efforts.

“The voluntary WI Exposure Notification app is another tool in our toolbox to stop the spread,” Evers said in a press release.

Wisconsin smartphone users will receive a push notification when the app launches on Dec. 23, inviting them to opt-in to the program and providing instructions for download.

DHS Sec.-designee Andrea Palm emphasized the Google/Apple collaborative app maintains user anonymity by relying on the Bluetooth of phones that have opted in and does not use GPS tracking.

“We are protecting privacy and allowing this to be anonymous,” said Palm during a Thursday media briefing. “Those were important considerations that when we looked at technologies earlier in the outbreak, we didn’t feel comfortable as it relates to privacy.”

If a user downloads the app and opts in to the program, their Bluetooth shares signals with other smartphone Bluetooth nearby through the app. If someone has the app and tests positive, they enter a code into their app which will ask them if they want to anonymously notify those who they have been in close proximity to for 15 minutes.

The governor’s press release assured that the app will not use, collect or store any GPS data or personal details, however additional details about the app are forthcoming.

Similar apps are already in use by other states, Palm said.

The launch of the contact tracing app comes as positive cases continue to decline in Wisconsin. The state reported a seven-day average of 3,192 new daily cases and 59 new deaths Thursday.

While the general trend of cases is going down, state epidemiologist Dr. Ryan Westergaard said, “that still, on average, [there] is a high level of disease activity statewide,” and reiterated a doubling down of mitigation techniques.

Distribution of the Pfizer COVID-19 vaccine began in Wisconsin this week, going to two hubs on Monday, four on Tuesday and the final two by Wednesday.

The allotment of the state’s almost 50,000 doses will need to be delivered slowly at first because of their ultra-cold storage to ensure no doses of the vaccine are wasted.

“It’s a brand new workflow and they’ve been doing dress rehearsals to make sure that they know exactly how it’s going from freezer to person,” Westergaard said Thursday, but that number is increasing every day.

Westergaard also affirmed that an additional, unexpected dose of the vaccine is in each of Wisconsin’s vials, as was reported from hospitals around the country this week.

“Once the active ingredient gets diluted, you can draw out the appropriate dose,” Westergaard said. “If there’s enough doses for six syringes instead of five, they should all have the same concentration, they should all be of the same quality, so they can be used.”

The Food and Drug Administration has advised that if a full additional dose is available from a vial, it should be used and not wasted.

While the first doses of the Pfizer vaccine are expected to go to frontline health care workers, the approval of a Moderna COVID-19 vaccine, which does not require ultra-cold storage, has triggered the rollout of a program that could begin administering the vaccine to long-term care facilities starting Dec. 28.

Wisconsin is expected to receive 101,000 doses of the Moderna vaccine and will be administered at long-term care facilities in partnership with the Centers for Disease Control and national pharmacy chains.

Palm said DHS expects to release vaccine data on its website, similar to how it has ramped up reporting in case numbers, hospitalizations, deaths and demographics.