The alternative care facility will open at State Fair Park Oct. 14, and can serve as many as 500 patients. 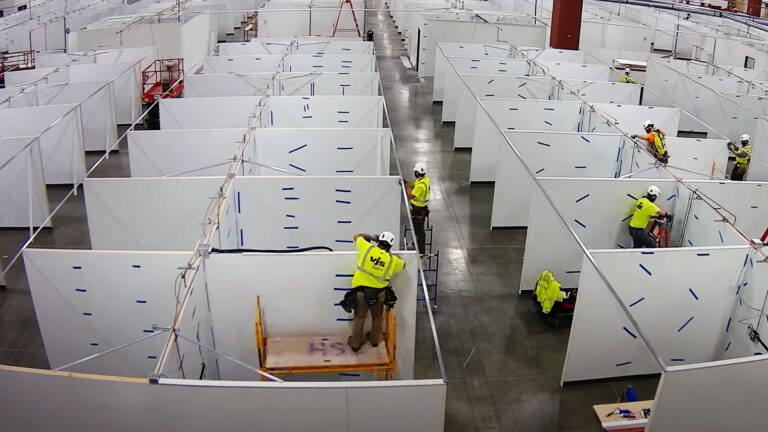 Gov. Tony Evers announced the state would activate plans to open a field hospital at State Fair Park, which comes as hospitalizations for COVID-19 spike.

According to data from the Department of Health Services, hospitals in the Fox Valley region—one of the hardest-hit areas currently—are operating at 90% capacity. Hospitals across the state are at 84% capacity.

“We hoped this day wouldn’t come, but unfortunately, Wisconsin is in a much different, more dire place today and our healthcare systems are beginning to become overwhelmed by the surge of COVID-19 cases,” said Gov. Evers.

The alternative care site will open next Wednesday, and can accommodate 500 patients at full capacity. Health secretary Andrea Palm said the site will begin with as many as 50 patients and scale up from there.

Palm said the decision to open the facility was made in conjunction with hospitals in the Fox Valley. Patients are expected to be transferred from hospitals in the region to the West Allis site by ambulance if their condition warrants.

Deb Standridge, CEO of the Wisconsin State Fair Park Alternate Care Facility, said the facility will be used as a hospital alternative for patients who are healthy enough to be able to walk on their own or with limited support.

“Patients there would be relatively healthy,” she said. “They would need more oxygen therapy...they may need additional IV medications or other types of medications to ensure they are healthy enough to be discharged home.”

Standridge said the facility will not function as a clinic, meaning it will not serve walk-up patients. Those at the facility would be transferred there from a hospital after being hospitalized for a day or two.

The State Fair Park site is one of two that have been considered since the beginning of the pandemic. Another site at the Alliant Energy Center in Dane County has been considered, but Palm said it is “not a flip-switch ready.”

Dane County Exec. Joe Parisi issued a statement Wednesday that the county was facing a record number of hospitalizations, and county facilities were testing some people from as far away as Brown and Racine counties.

“Some of our worst fears are being realized,” he said.

Palm said the state is working with staffing agencies to help develop a plan to make sure the facility can remain staffed. Last week, ThedaCare CEO Imran Andrabi said in a briefing that staffing facilities remained one of the biggest concerns in the Fox Valley as many health care workers were out due to illness or quarantine.