Gov. Tony Evers and other Democrats are trying to turn the election into a referendum on abortion, but his opponent Tim Michels and other Republicans are focusing instead on crime and public safety. 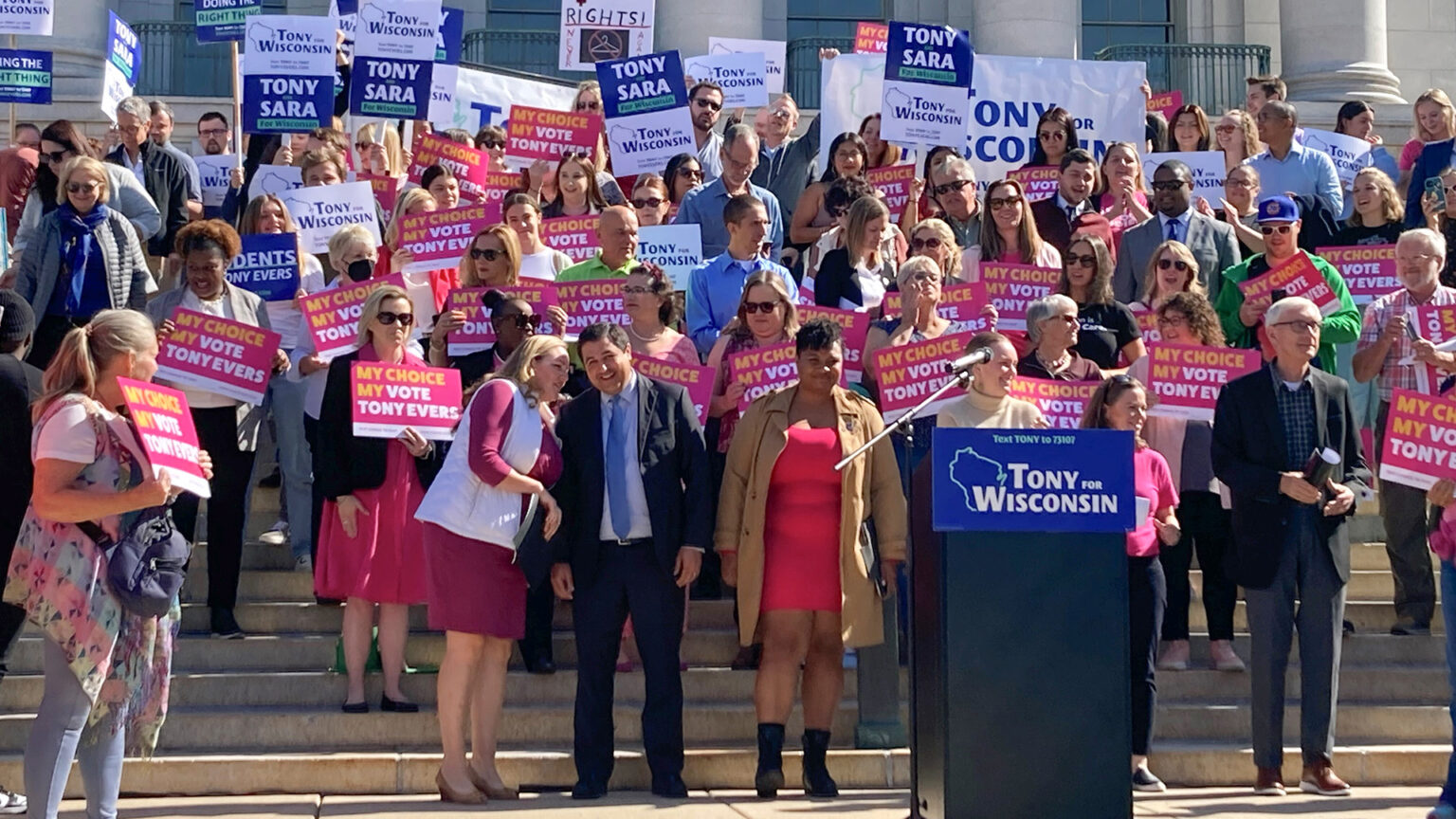 Democrats and abortion rights supporters, including Gov. Tony Evers, standing at bottom right, gather for a rally outside the Wisconsin state Capitol in Madison after the Republican-controlled Legislature refused to act on a measure to create a pathway for voters to decide on whether to keep the state's 1849 abortion ban on Oct. 4, 2022. (Credit: AP Photo / Scott Bauer)

MADISON, Wis. (AP) — Wisconsin's Republican-controlled Legislature took mere seconds on Oct. 4 to reject Democratic Gov. Tony Evers' call to create a way for voters to get a chance to repeal the state's 1849 abortion ban, even as Republican U.S. Sen. Ron Johnson voiced support for letting the people decide the issue.

The move by Evers is the latest by Democrats in the battleground state to turn the Nov. 8 election into a referendum on abortion. But Evers' opponent Tim Michels, Johnson and other Republicans are focusing instead on crime and public safety in arguing that Democrats have failed to keep the state safe.

A Marquette University Law School poll in September showed both the state's governor and Senate races to be about even, while a majority of voters support abortion rights. That same poll also showed crime and public safety to be issues of high concern among voters.

The Wisconsin Senate convened for all of 15 seconds, to gavel in and adjourn, the special session called by Evers to pass a constitutional amendment that would create a pathway for an up or down vote on the state's abortion ban.

The Assembly, also controlled by Republicans, took about 20 seconds to dispense with Evers' call, over howls of complaints from about a dozen Democratic lawmakers, some wearing T-shirts that said "Abortion is health care."

Evers has repeatedly used the tactic of calling special sessions on hot-button political issues, including gun control and expanding Medicaid, to put Republicans on the spot. They have never acted on any of the special session calls, including one in June to repeal the state’s abortion ban.

Kansas voters in August rejected a ballot measure that would have allowed the Republican-controlled Legislature to tighten restrictions or ban abortion outright. Michigan voters will decide in November whether to put the right to an abortion into the state constitution.

"We should give the people an opportunity to vote on these important issues," Evers said after the Legislature rejected his proposal. "The people of this state should have the right to take a stand at the ballot box. But true to form, Wisconsin Republicans have refused to act. That's not leadership. And that's certainly not democracy."

Wisconsin clinics stopped performing abortions after the U.S. Supreme Court overturned Roe v. Wade, as a legal fight plays out to determine whether the state's 1849 abortion ban is in effect.

At his campaign stop at the Square Tavern where he received the endorsement of the powerful Tavern League of Wisconsin, Michels pledged to work with the Legislature on abortion-related issues. 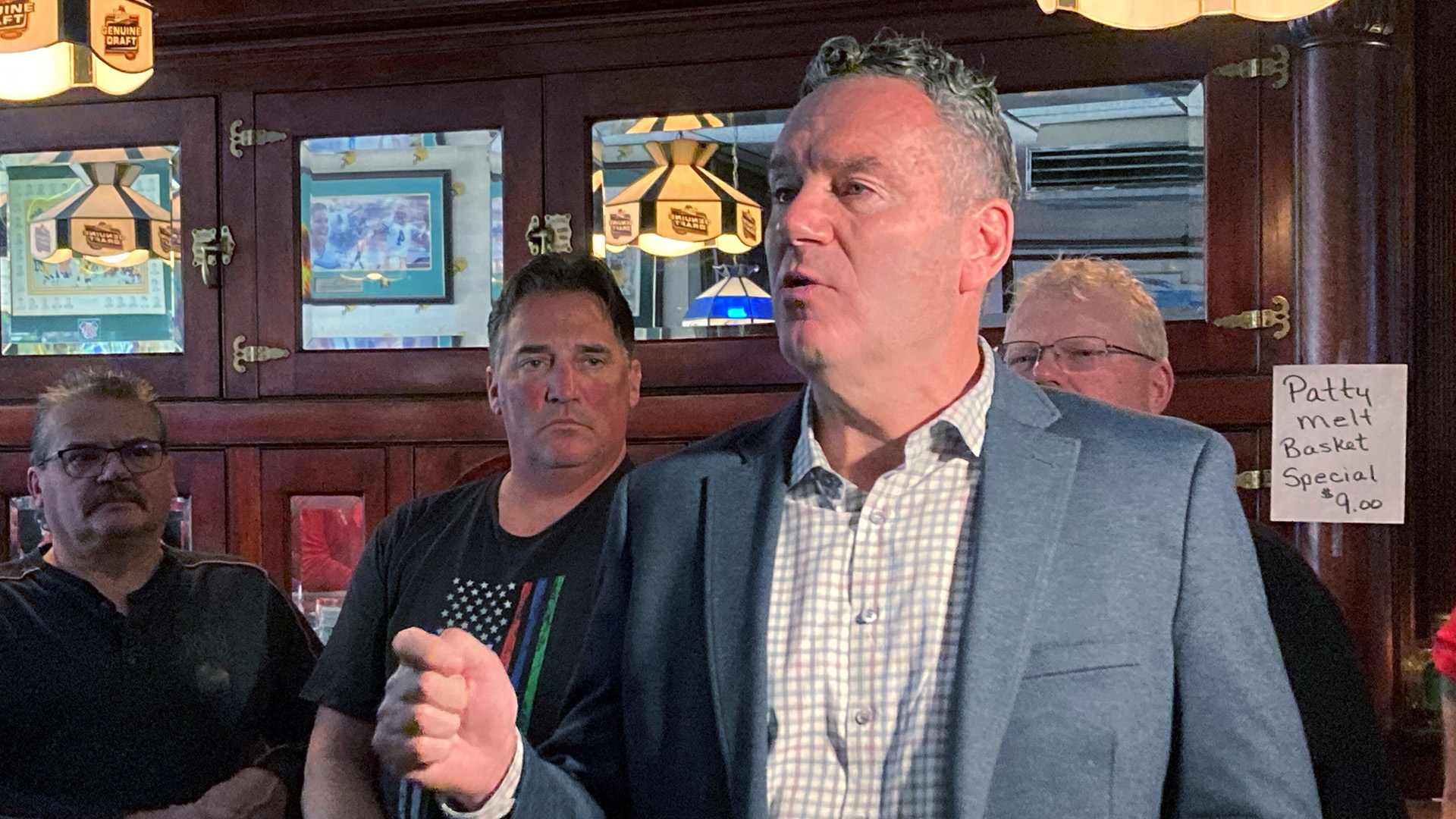 Republican candidate for Wisconsin governor Tim Michels speaks during a campaign stop at a bar on Oct. 4, 2022, in Baraboo. Michels did not address a question about the Republican-controlled Legislature rejecting a move that would have created a way for voters to decide whether to keep the state's abortion ban. The candidate said he would work with the Legislature on abortion and would sign a bill creating exceptions for victims of rape and incest that do not currently exist. (Credit: AP Photo / Scott Bauer)

Unlike other states, Wisconsin law does not allow voters or the Legislature to place referendums on the ballot.

That could allow for a straight up or down vote on keeping the 1849 ban.

But Johnson came up with another approach on Oct. 4. He proposed a ballot measure with 10 possible answers that posed the question: "At what point does society have the responsibility to protect the life of an unborn child?" The options would range from the moment of conception to never.

Johnson did not say how he would get the question before voters, since it can't be done now without a change to the constitution. He also did not address, or respond to a question seeking reaction, to the Legislature rejecting Evers' plan that would have created a way to put before voters the questions Johnson wants answered.

Lt. Gov. Mandela Barnes, the Democratic candidate for U.S. Senate, accused Johnson of trying to "run away from his disastrous record" on abortion by calling for a referendum.