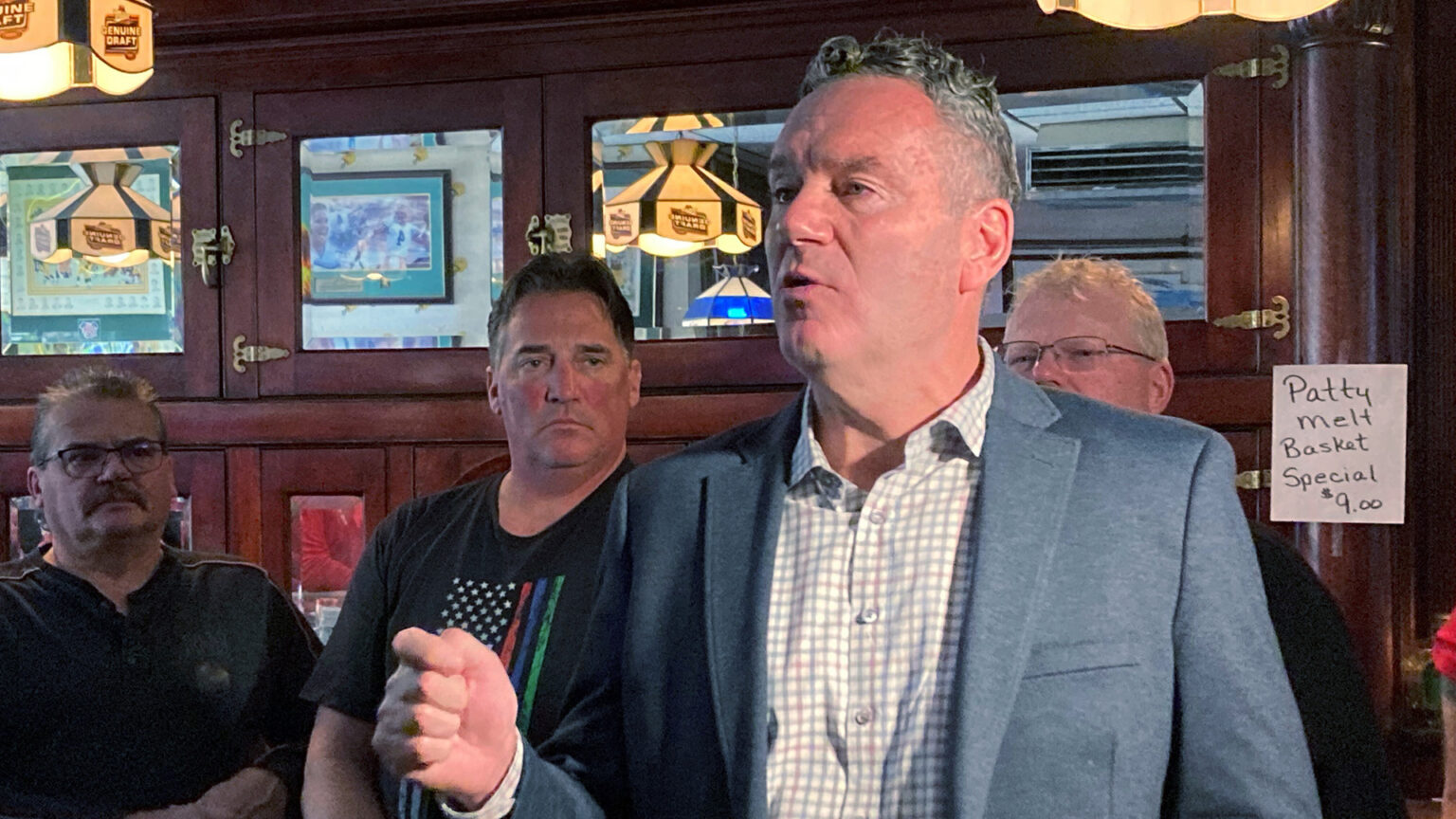 Republican candidate for Wisconsin governor Tim Michels speaks during a campaign stop at a bar on Oct. 4, 2022, in Baraboo. Michels did not address a question about the Republican-controlled Legislature rejecting a move that would have created a way for voters to decide whether to keep the state's abortion ban. The candidate said he would work with the Legislature on abortion and would sign a bill creating exceptions for victims of rape and incest that do not currently exist. (Credit: AP Photo / Scott Bauer)

MADISON, Wis. (AP) — Republican Tim Michels was talking to a roomful of party activists in early September when he fielded a question about his position on abortion. Michels vowed he would never change, and said he was "winning" his race against Democratic Gov. Tim Evers precisely because people saw him as "a man of conviction, a man who doesn't waffle."

Two weeks later, Michels retreated from his unqualified support for Wisconsin's 1849 law banning abortion except to save the life of the mother, saying if elected he would sign legislation to grant exceptions for rape and incest.

It wasn't the first time Michels changed course on a significant issue. Since getting into the race in April, Michels endorsed Donald Trump for a 2024 run, after first declining to support anyone; said the state's bipartisan election commission should be eliminated, after first saying he wanted to keep it; and began welcoming big-dollar donations after earlier saying he wouldn't take any larger than $500.

Michels and Evers are in a close race with broad implications for national politics in 2024 and beyond. Evers has highlighted his status as the only barrier to total GOP control, including his vetoes this year of Republican legislation that would have made it more difficult for some voters to cast ballots in the key battleground state. A Michels victory would give the GOP free rein to pass those changes and more.

It's the most expensive governor's race in the nation in terms of ad spending, with both sides spending about $55 million on TV so far, according to AdImpact Politics, which tracks spending by major campaigns.

Michels declined an interview request. But when asked about his change in position at a campaign stop on Oct. 4, Michels said, "I've been very clear and consistent throughout that I am pro-life, and I make no apologies for that."

Michels said he would sign a bill creating abortion exceptions in cases of rape and incest because if the Legislature passes it, that means "the people have spoken."

It's not clear whether Michels will pay any price with voters for his evolving position on abortion or other issues. Brandon Scholz, a Republican strategist, said he doubted it. Most voters have already decided whom they support, he said.

"The independents that started in this race after the primary have picked their sides," Scholz said. "Republicans have made up their minds on Michels. I don’t see anything out there that would move Republicans to vote for Tony Evers." 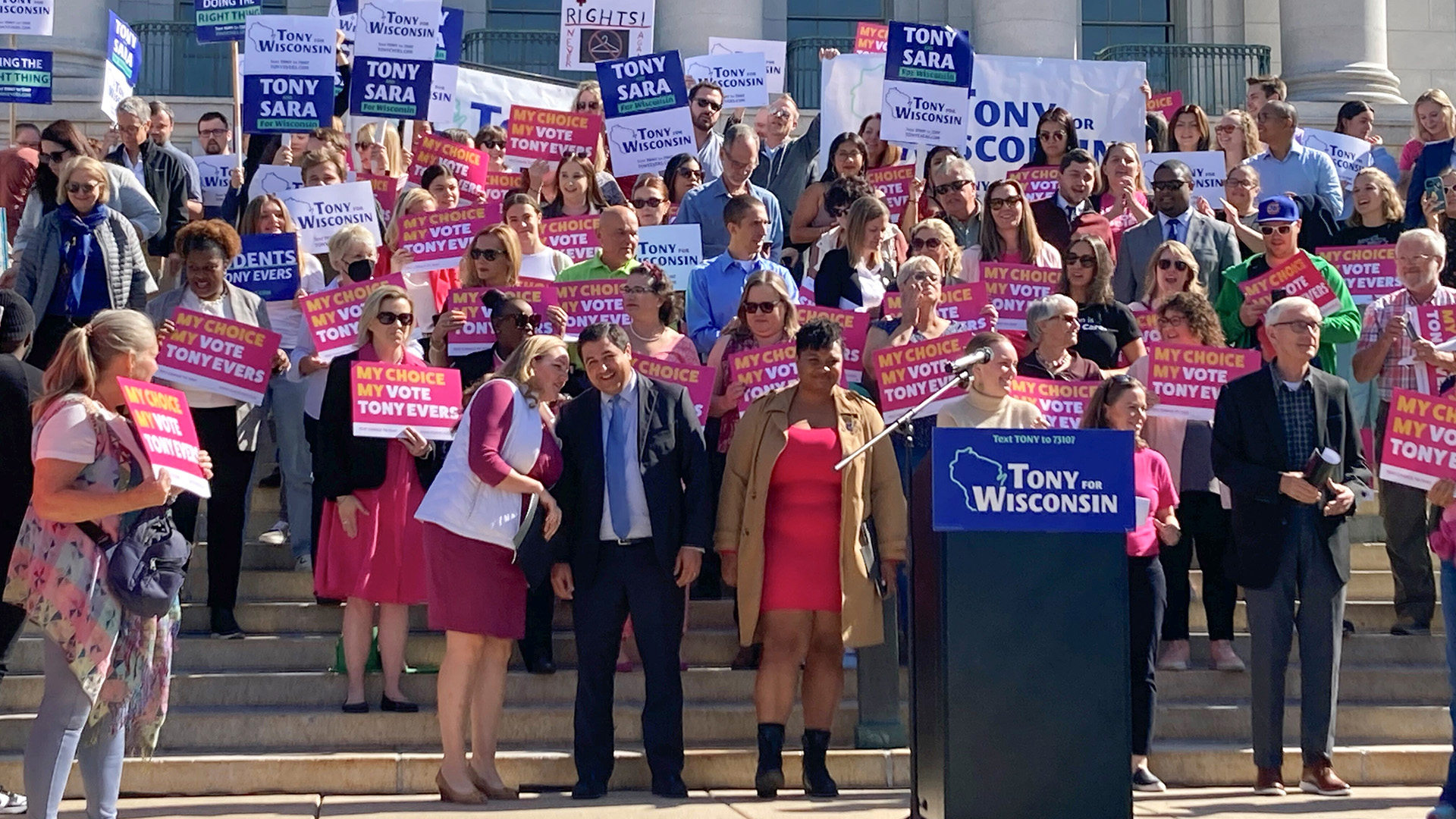 Democrats and abortion rights supporters, including Gov. Tony Evers, standing at bottom right, gather for a rally outside the Wisconsin state Capitol in Madison after the Republican-controlled Legislature refused to act on a measure to create a pathway for voters to decide on whether to keep the state's 1849 abortion ban on Oct. 4, 2022. (Credit: AP Photo / Scott Bauer)

That hasn't stopped Evers from seeking to batter Michels on the abortion issue.

"It's not surprising he would make a last-minute, dishonest attempt to hide his radical record on abortion, education, and more," Evers said in a statement to The Associated Press.

Michels is in his first campaign since an unsuccessful run for U.S. Senate 18 years ago. Barry Burden, a political science professor and director of the Elections Research Center at the University of Wisconsin, said such candidates "make mistakes sometimes."

"They say things that commit then to a position or a path that they eventually don't want to be on so that creates inconsistencies with their positions as they try to walk back earlier views," he said.

A Marquette University Law School poll taken shortly before Michels' reversal found 83% of respondents — including 70% of Republicans — supported exceptions for rape and incest.

"Abortion is a little bit of a worrying sign for Republicans as an issue and it might be the only thing that ends up saving some Democrats who are having a tough go of it," Burden said.

To push back, Michels accuses Evers of breaking promises with voters on a variety of issues, including changes in approach to fighting COVID-19 in 2020. He also points out that Evers proposed tax increases, after saying he didn't intend to raise taxes, and then later took credit for tax cuts passed by the GOP-controlled Legislature that he signed into law.

As part of his strategy to make the race about crime and safety, Michels has also attacked Evers over his administration paroling people convicted of murder and rape and said that Evers has broken his promise made in 2018 not to release violent offenders.

Evers does not determine who is granted parole, something that has occurred routinely under both Republican and Democratic governors for decades.