What's Pushing Record Lumber Prices and Who in Wisconsin Is Benefiting?
Skip to content

The coronavirus pandemic has fueled a home construction boom around the nation, but loggers and builders want to know where the profits are flowing as demand for wood products spikes. 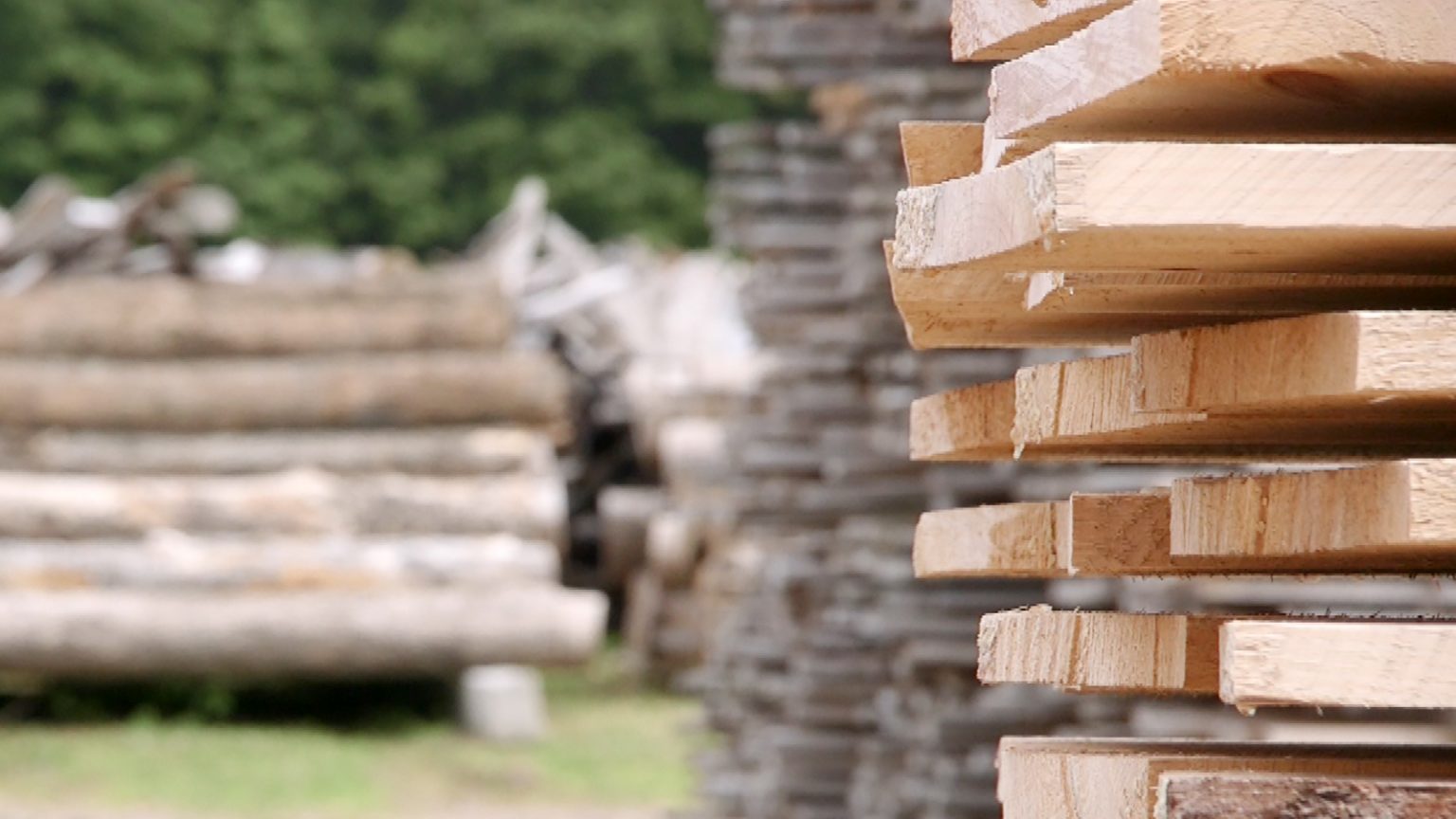 "They say, 'Geez Matt, you must be making a killing,'” Jensen remarked.

He understands why people assume that with lumber at record price levels, the man cutting down trees and hauling them to the mill is getting some of the profit but said that's just not true.

"We're not seeing those exorbitant prices, we're not getting that," Jensen said. "The logging contractor is getting paid less today than a year ago."

Jensen has been logging for 35 years, and besides running his own business, Whitetail Logging, he's the current president of the Great Lakes Timber Professionals Association, a logging industry trade group that represents about 1,000 companies across Michigan and Wisconsin.

Jensen said all loggers are asking the same question about why the price of lumber can go up but the profits don't flow down to them.

"It's a very strange time, and I don't know why there's not any pass through, because there's high demand," he said.

"I've been doing this almost 31 years," said Church. "(Lumber is) a commodity market — prices go up and come down. This run has been unprecedented for how long-lasting and the degree to which prices have risen."

Church said prices doubled during the housing boom of 2004 and 2005 (before falling after the ensuing bubble burst), but has never seen them triple or quadruple with no downturn in sight. He said the biggest reason is demand for housing.

Chad Lawler, executive director of the Madison Area Builders Association, shared a similar perspective from the construction side of the wood business.

"There's a pretty large demand for housing and lumber is putting a big wrench in plans," said Lawler, noting this crunch is causing significant delays and cost increases. The average cost to build a house has increased anywhere from $24,000 to $36,000 since before the COVID-19 pandemic struck in early 2020. Some contractors plan for a standard cost overrun buffer of 10-15%, but Lawler said that "gets eaten up by lumber pretty quickly."

If the financing on a project is already set, Lawler said banks are not willing to increase the credit level, which means "consumers will need cash on hand to cover increases."

If the prospective homeowner doesn't have the cash, they don't have a lot of options.

"Some people are putting it on hold for a year. Some put it on hold last fall and were thinking spring," Lawler said. "They were hoping for price adjustment this spring, but (that) hasn't happened."

So far the price of lumber hasn't slowed down the housing boom in Wisconsin.

The Wisconsin Builders Association announced housing starts in the state were up 35% in the first quarter of 2021, which follows a 10% increase in 2020 compared to 2019.

Brad Boycks, executive director of the group, said low interest rates and people saving more money during the pandemic has helped push the housing boom, but also acknowledged that some people are getting "priced out or taking on more debt" to get into a new home.

Some builders are not including lumber prices in their bids, letting the customer know they have to wait until construction starts to determine a price. Boycks called that "a prudent choice."

Jonathan Sharp finished construction on a new home outside Eagle River in August 2020. Just a few months later he saw his builder at the store and asked how much more it would cost with the higher lumber prices.

He explained what that means when a construction loan is already set.

"You can't go back and get another $50,000. That would come out of pocket. We would not have gone forward,” Sharp said.

Sharp has already decided to delay building a pole shed he had planned.

"We're trying to get very creative with the least amount of materials," he said. 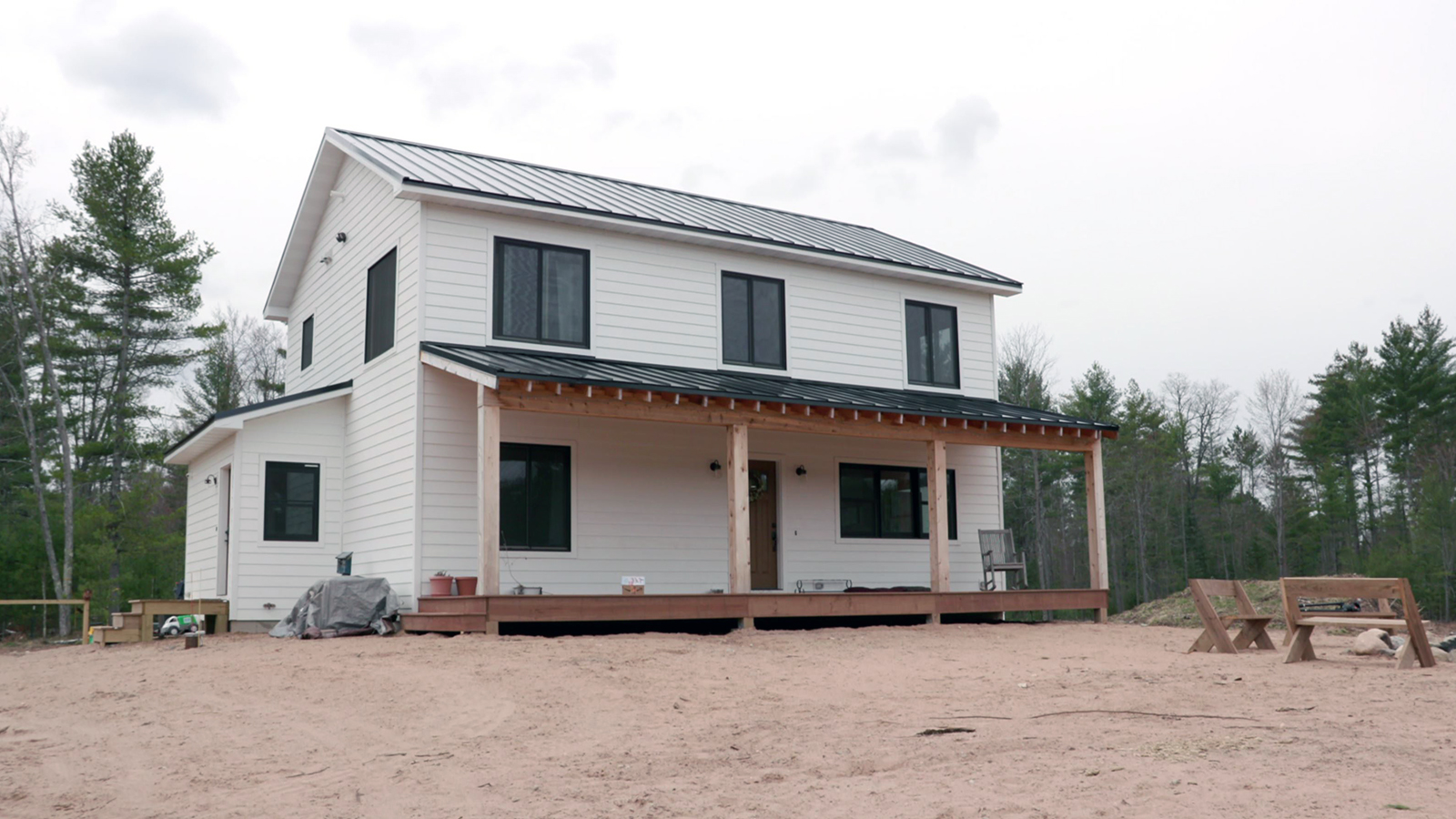 Jonathan Sharp completed construction on a house near Eagle River in August 2020, saving tens of thousands of dollars on lumber costs had it been built only months later. (Credit: PBS Wisconsin)

Plenty of people are going forward with new projects. Ray Yunker is a home builder who owns Artisan Craft Homes in Dane County.

"(There's) such a shortage of housing, prices become no object, it's a bit bizarre and unsettling," he said.

Yunker constructs homes with pre-built wall panels, so the cost of lumber is 95% locked in from the start. Even so, the cost for the average house for a panelized package is up $30 to $50,000.

Yunker stated he's not the one reaping the benefit of the rising costs of materials.

"We're not making more money. (It's the) same money per house," he said.

Who is making money from the lumber boom?

Brad Boycks from the Wisconsin Builders Association wants to know as well.

"That's a big question — where's the money going?" he asked.

"That's a damn good question, I don't know," said logging contractor Matt Jensen. "Everybody is saying they're not making any money. Somebody is making an absolute haul and it’s not me."

Shawn Church from Random Lengths says it's the sawmills.

"Log prices haven't risen that much. Money is really being made at the lumber and structural panel production level, the mill level," Church said. 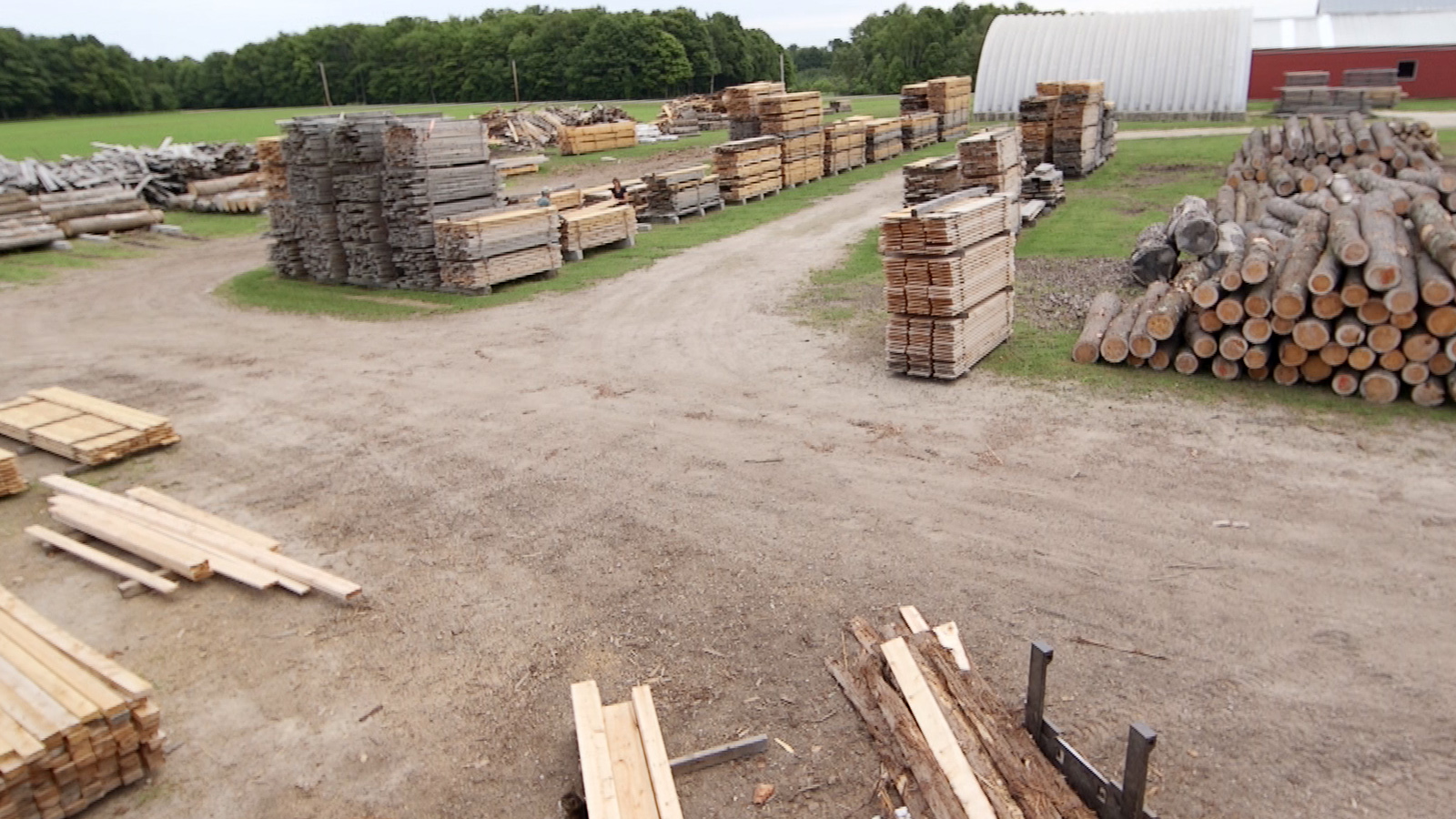 Stacks of raw timber and processed lumber sit in a lumberyard in Door County in 2014. Seven years later, the price of lumber is spiking as demand has grown during the coronavirus pandemic. (Credit: PBS Wisconsin)

The Wall Street Journal reported large lumber companies like Weyerhaeuser and Canfor are seeing record profits. Two of the largest sawmills in Wisconsin are located in Prentice and Spencer, and run by Biewer Lumber, based out of Michigan.

Bill Schlottman is a sales manager with Bierwer. He said it doesn't feel like they're making all the money.

"Doesn't feel like it, with the stress, transportation costs," he said.

Schlottman said the increased lumber costs are "dispersed all the way through the chain and manufacturing."

Schlottman explained the company relies on the third-party analysis of Random Lengths to set its lumber prices. He said it's increased demand that's pushing prices higher, not price gouging from sawmills.

"At the end of the day, we'll be on market, you've got competition and a customer base relying on you," Schlottman said. "If we were gouging customers, that wouldn’t work. We have a long-term focus, not short-term."

"We are simply a third-party observer of the market," he said. "We report the wood products markets on that individual third-party observer basis. We definitely don't set prices, we publish benchmark prices. We're just reflecting the level of prices that are out there."

Church said he's aware some mills use the publication's benchmark price reporting to set their own prices.

"They contract on the levels we report," he said. "It's a practice we don't encourage, but they do it."

Church added the publication only reports on "open market transactions" when analyzing the market to avoid a feedback confirmation bias.

Pandemic demand and strains to supply

What started the lumber price spike? Everything points back to the start of the pandemic.

Bill Schlottman of Biewer Lumber said sawmills were forced to shut down and since reopening haven't been able to increase capacity.

Church said there were issues with the whole lumber industry before the pandemic.

"We have these bottlenecks in the supply chain largely related to labor issues, exacerbated by the pandemic," he said.

At the same time, more people working remotely were starting remodeling projects or looking to build a new home, increasing demand for lumber.

Chad Lawler with the Madison Area Builders Association said the cost of all building supplies have gone up, from glue to foam to insulation.

"Every component is more expensive or difficult to find, lumber is just more noticeable," he said.

So where does it end? When does the rise in lumber prices cause a crash in the housing market?

Lawler said his members are already worried: "Builders are concerned about a housing bubble, preparing for demand to drop off."

"Warning signs are out there. Interest rates are low, if they go up that's a big worry," he said.

But Boycks suggested more lumber coming on the market could help. He points to tariffs on Canadian timber put in place by the Trump administration as hurting imports. (In December, the tariff was dropped from 20% to 9%, but builders would like to see it dropped more or removed altogether.) He also wonders if the U.S could increase capacity. 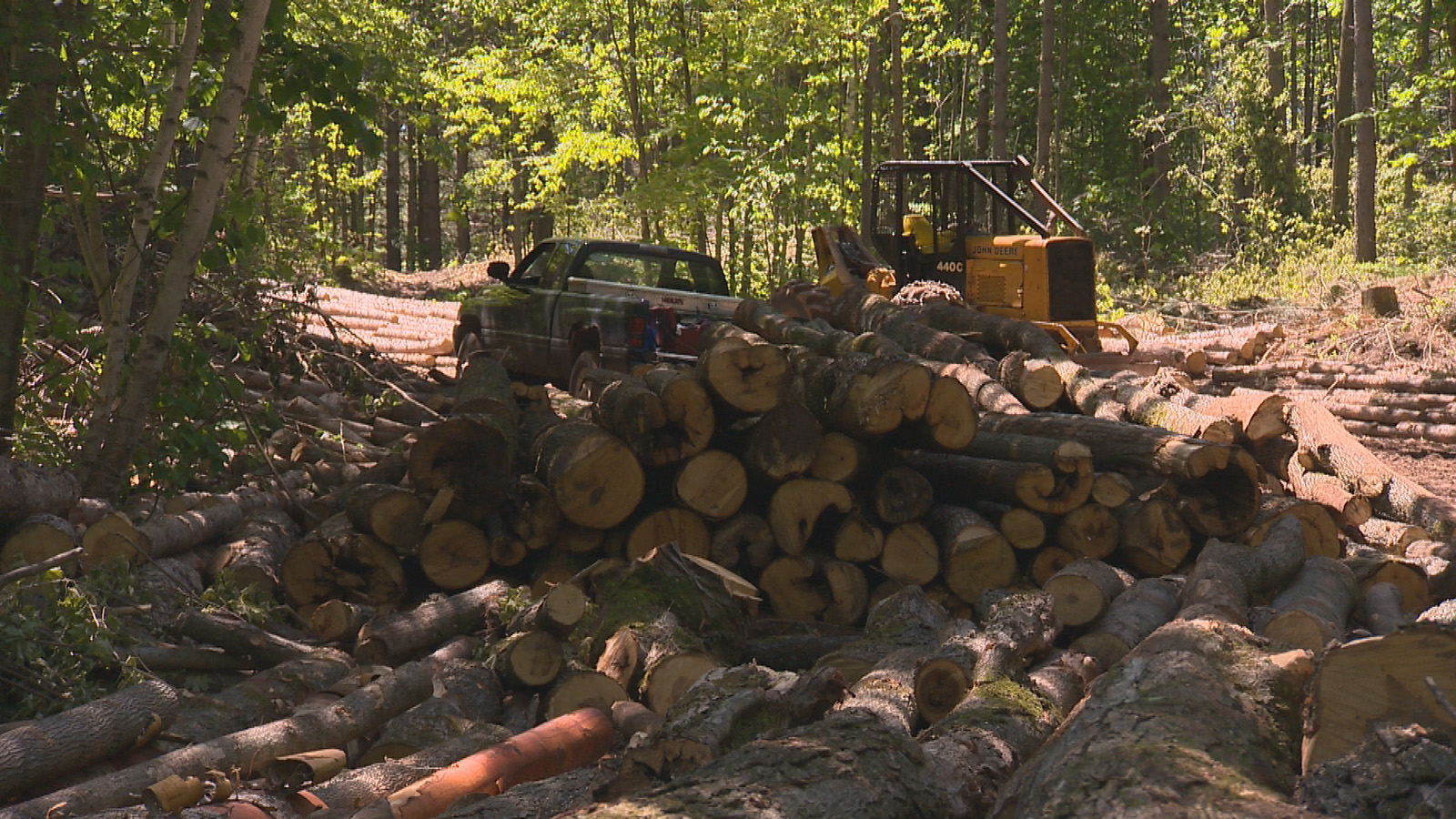 Stacks of unprocessed timber crowd a forest clearing at a logging operation in Lincoln County in 2014. With demand for lumber rising in 2020 and 2021, loggers are busy but capacity for processing timber remains limited. (Credit: PBS Wisconsin)

There are trees growing in the North Woods, but Schlottman warned Biewer already runs two shifts at its sawmills.

"We won't be able to increase capacity. There's only so much you can do," he said.

Scott Lyon, a forest products specialist with the Wisconsin Department of Natural Resources, pointed to technology.

"Some sawmills (in Wisconsin are) looking for new technology to increase capacity by 50%," he said.

As a whole, the timber industry is quite specialized, explained Lyon, and it doesn't have the ability to move quickly to capitalize on big market shifts like the current boom.

"As a whole a lot of the mills — hardwood, softwood — are having trouble finding staff right now,” he said.

Multiple paper mills in Wisconsin have shut down over the past decade, but the trees that once fed them aren't the same type that end up in a two-by-four or a sheet of plywood.

"Some paper mills use pine, but most paper mills were hardwood, which is typically not used in lumber," Lyon said

The DNR has seen a surge in the number of people looking to take a class to become certified to grade their own lumber. In the past it's held two classes a year; in 2021, there have already been five.

"In the past, it was landowners (looking) to build their own cabin," Lyon said. "Now small companies are taking classes with a portable sawmill, looking to utilize underused species."

Logger Matt Jensen said even if more sawmill capacity comes online, there may not be enough loggers around to bring in the wood. He's seen a number of colleagues go out of business in the last year.

"A lot of guys going out of business — there will be a shortage, peak and demand," he said.

Unless sawmills pass down the profits, Jensen thinks the logging industry will be in a tight spot.

"There's capacity for material, mills are buying, they're just not paying," he said. "That's the ugly side of supply and demand."

A pandemic stimulus package enacted at the end of December included $200 million targeted for loggers, but that money hasn't been released by the federal government.

U.S. Sen. Tammy Baldwin, D-Wisconsin, added her name to a Feb. 3, 2021 letter signed by nine senators urging the U.S. Department of Agriculture to release the funds, but Jensen fears the money will end up somewhere else.

"They think we're reaping these high profits," he said.