The number of Wisconsinites registered to vote as of Aug. 1 is approaching the state's highest total for this figure as turnout is expected to increase for high-profile, closely contested midterms. 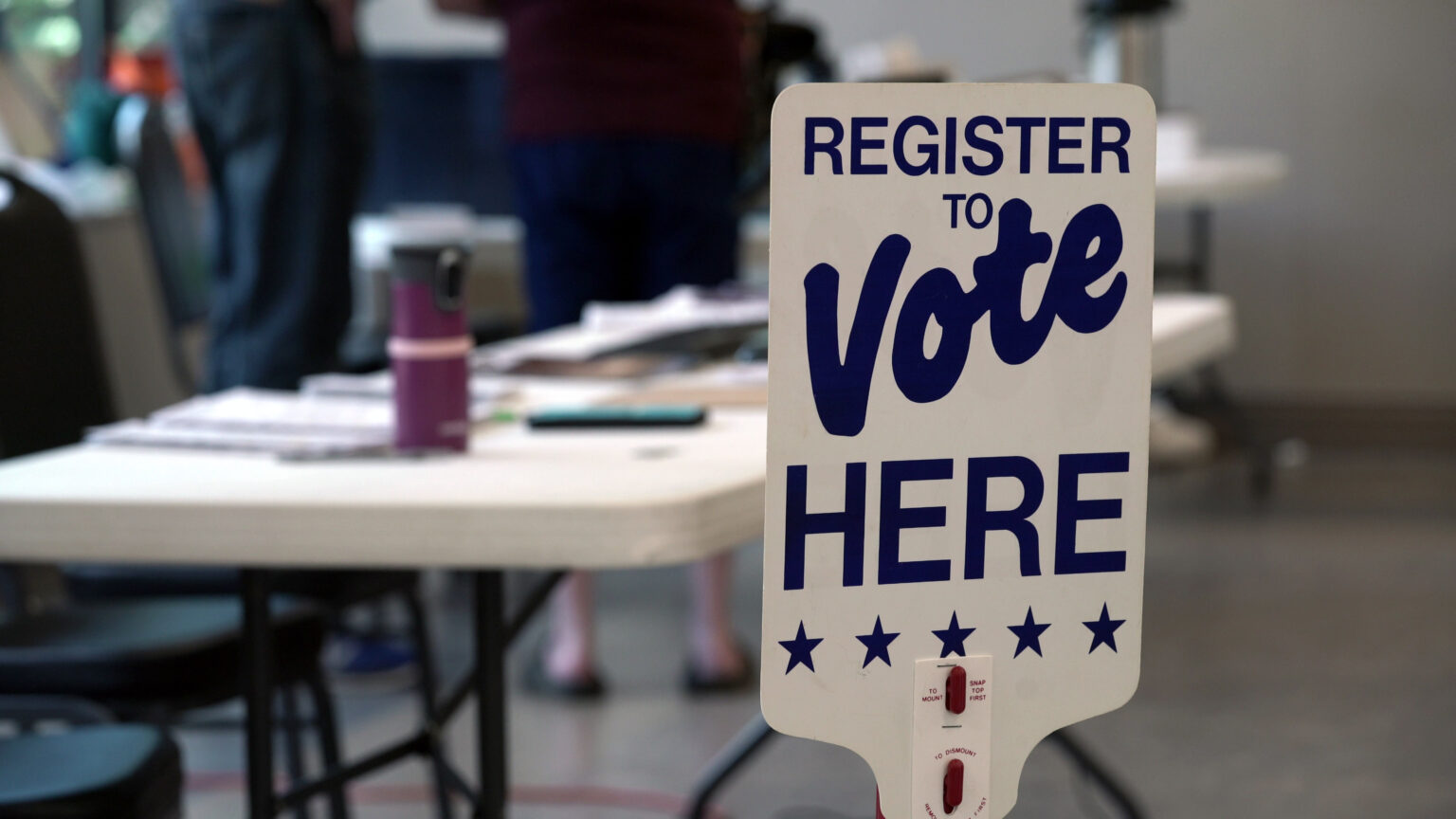 A sign at an Appleton polling place on Aug. 9, 2022 indicates where people can register to vote on Election Day. (Credit: PBS Wisconsin)

A week before Wisconsin's 2022 primary election, a review of state records showed the number of registered voters was higher at that point than any other midterm for at least 12 years.

The Wisconsin Elections Commission publishes voter registration statistics on a regular basis, releasing reports primarily on a monthly basis for at least the past decade. Its August 2022 report indicated that there were 3,468,390 registered voters in the state as of the first of the month. That figure represents roughly three-quarters of the state's adult population, of whom most but not all are eligible to vote.

There are indications that interest in voting in the 2022 midterms is growing around the United States. The U.S. Supreme Court's ruling in Dobbs v. Jackson to strike down federal abortion rights has been followed by more women registering to vote, at least in some states. One electoral outcome potentially reflecting this trend was an Aug. 2 referendum in Kansas on the legality of abortion, which drove record numbers of voters to the polls.

Here's what Wisconsin's voter registration figures reveal about trends that could influence turnout in the fall 2022 elections.

Wisconsin doesn't track how many women have registered to vote
The Wisconsin Elections Commission notes the state "does not collect information on the gender, race or political party affiliation of registered voters."

National polling from KFF, a national non-profit, non-partisan health policy organization, shows more women are reporting that they are more motivated to vote than in previous elections. Women have voted at higher rates than men in every presidential election since 1984, but lower overall turnout rates in midterm elections means even a slight shift in the number of women voting in response to the overturning of Roe. v. Wade could have major impacts.

Voters in Wisconsin are aging
In 2012, Wisconsinites aged 50-64 accounted for over one million voters in the total electorate, while voters older than 65 represented just under 750,000 people. However, over the past 10 years, those numbers have been flipping as baby boomers age.

As of 2022, voters aged 50-64 comprise about 940,000 registered voters. But, Wisconsin residents ages 65 and older make up about 970,000 votes in the electorate, about 200,000 more than 10 years earlier. Wisconsin's population above age 65 has increased by 10% over that time, according to the Wisconsin Department of Health Services.

One data element related to these numbers is also relevant, as the state's age group file "slightly understates the total number of registered voters because some voters who registered before the statewide voter registration system was created in 2005 do not have a date of birth on file."

However, younger voters tend to turnout more for presidential elections than midterms. The 2012, 2016 and 2020 elections all saw larger numbers of young voters registered as of Aug. 1 compared to 2022.

The number of votes cast in midterm elections is increasing
Just 2.17 million votes in Wisconsin were cast in the 2010 midterm during the first term for President Barack Obama, with a total turnout just below 50%. Eight years later during the 2018 midterm elections under President Donald Trump, 2.67 million Wisconsinites cast a ballot, making for a turnout just below 60%.

In recent cycles, voters are taking more of an interest in midterm elections, bringing turnout numbers closer to presidential elections. Presidential elections in the state have generally seen between 3 and 3.3 million votes, making for turnouts between 67-73%.

Only 2016 tops number of registered voters so far
Nearly 3.47 million Wisconsinites out of the roughly 4.5 million that are voting age have registered to vote in the 2022 election, the highest number seen for a midterm in at least the past 12 years. The last midterm election in 2018 recorded just 3.1 million registered voters by August 1, despite the race for governor on that ballot.

The number of registered voters as of Aug. 1 is only topped by those for the 2016 general election — with 3.48 million registered voters at that point that year — in the midst of the highly contentious race between Trump and Hillary Clinton for the presidency.

Given the number of weeks before the November election, it is possible that Wisconsin's 2022 number of registered voters will top those in 2016.

Eligible Wisconsinites can register to vote in advance of an election or at polling places on Election Day. MyVote Wisconsin provides information about registering to vote, which can be conducted online at least 20 days before an election. Voters must provide a valid photo ID, which can include a Wisconsin driver's license, Wisconsin Department of Transportation ID, military ID, tribal ID or a U.S. passport. Voters can also register in-person at a municipal clerk's office. Additionally, Wisconsin is one of 22 states and jurisdictions that allows for same-day voter registration at polling locations on Election Day.

Multiple high-profile races are on the ballot in Wisconsin in 2022, including the governor's race between incumbent Tony Evers and challenger Tim Michels, and the U.S. Senate race between incumbent Ron Johnson and challenger Mandela Barnes. These and multiple other races, including the lieutenant governor, secretary of state, attorney general and 3rd Congressional District elections, will decide the future of politics in Wisconsin in coming years.