Republicans Hold State Convention in Green Bay Amid Pandemic, Ahead of Presidential Election
Skip to content

Republicans Hold State Convention in Green Bay Amid Pandemic, Ahead of Presidential Election

Speakers at the state party convention presented dire warnings for the status of the country if Trump failed to win reelection. 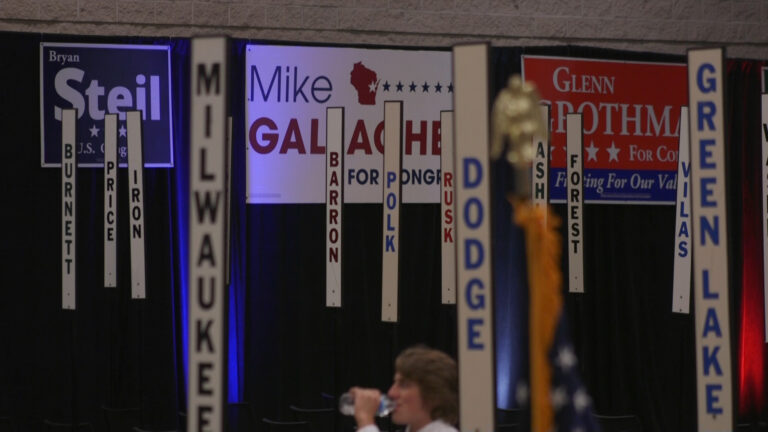 Campaign signs adorn the walls of the convention floor at the state Republican Party convention July 11, 2020.

Wisconsin Republicans rallied supporters at the state party’s convention, painting a dire picture of America if President Donald Trump fails to win reelection in the fall.

“You need to ask yourself what you’re willing to do to create a more perfect union,” said U.S. Rep. Bryan Steil. “Because our country is at stake.”

Members of Wisconsin’s congressional delegation and other prominent Republican Party members spoke to a crowd of a little more than 300 in Green Bay at a scaled-down event due to the COVID-19 pandemic.

“This election is about the mobs that stand much taller than Joe Biden,” he added. “That is how great countries die, by bending to the mob.”

The speakers used the current racial justice protests and efforts to defund the police to contrast Trump with Democratic contender Joe Biden.

“He will keep our communities safe,” said former White House staffer Mercedes Schlapp about Trump. “Lets compare this to Joe Biden, the squad and the leftist Democrats who want to defund the police.”

“Do we want to be the next Seattle?” she added.

The convention underscored recent partisan divides in the state. This week the state Supreme Court issued rulings in two politically divisive cases: one on the 2018 lame duck session, which saw powers shifted from the executive to legislative branches in the waning days of the Walker administration, and a challenge to the governor’s veto power brought by the conservative Wisconsin Institute for Law and Liberty.

During a panel on the current tides in state government, Senate Majority Leader and congressional candidate Scott Fitzgerald said Evers was not up to the job of running the state.

Fitzgerald said having staff run the governor’s office has lead to more partisan maneuverings by the governor.

The partisanship also came out in disagreements over the two parties’ responses to the coronavirus pandemic. State party chair Andrew Hitt said the “draconian” measures used by Democratic local officials to combat the virus should serve as incentives to elect down-ballot Republicans.

The Republican convention comes just one month before the August 11 partisan primary, and less than four months before the November general election.