The Wisconsin Elections Commission debated for hours Friday on how to interpret the U.S. Supreme Court order mandating ballots in this April's election have an April 7 postmark if received after Tuesday. 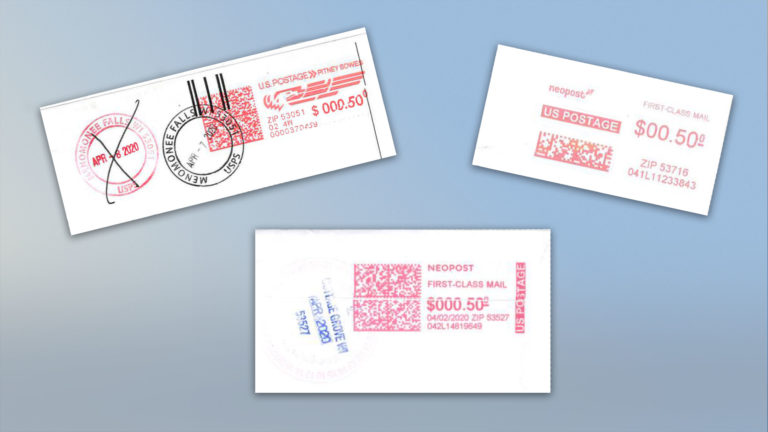 Examples of postmarks on absentee ballots received by clerks during the April 7, 2020 election, from a memo prepared by the Wisconsin Elections Commission.

Confusion born of unclear or missing postmarks reigned Friday evening during a meeting of the Wisconsin Elections Commission. The members tried to determine how to treat absentee ballots under provisions of an election-eve order from the U.S Supreme Court.

The high Court ruled that to be valid, absentee ballots in Wisconsin’s spring election had to be postmarked by election day April 7 and received by April 13 at 4 in the afternoon. However, election clerks across the state asked the WEC for guidance, having received ballots that either had no postmark, had an April 2020 postmark, or had other stray or ambiguous marks. (photos from memo)

Nearly 1.3 million absentee ballots were requested for Tuesday’s election. Some 1.08 million were returned to election clerks as of Friday.

“Municipal clerks submitted hundreds of examples of absentee ballot envelopes which did not bear a postmark date on or before April 7, 2020 but which may have been in the possession of the U.S. Postal service (USPS) by that date,” Meagan Wolfe, Administrator of the Wisconsin Elections Commission wrote in her April 10 memo to all Wisconsin local election officials.

The USPS instructed all its branches to use their round hand stamp on ballots received on election day, according to Wolfe, who said she reached out to state, regional and Washington D.C. postal officials for clarity.

“I’ve asked them multiple times now to send us guidance. Send us that email that they sent to their branches with that guidance so that we can understand exactly what they were doing on and around election day and what some of these postmarks might mean,” Wolfe said in the WEC meeting.

Commissioners unanimously passed a motion saying that if absentee ballots bear a postmark with the date of April 7 or before, they will be counted. They also affirmed that election clerks should accept absentee ballots with an “APR 2020” stamp if the elections commission receives a signed statement from a USPS official saying that stamp was only used on ballots received on election day.

That still leaves issues of illegible markings, no postmarks or missing ballots up in the air.

“We are having a really hard time getting any answers from the postal service themselves,” Wolfe said about errant ballots. Those issues include:

“We have no indicators that there was some sort of systemic issue with the design or envelope,”  Wolfe said.

Clerks will begin counting the ballots at 4 p.m. on Monday, April 13, and sought help on how to treat the various markings.

“What should we tell clerks to do? Otherwise they’ll make those decisions and it won’t be consistent across the state,” Wolfe asked commissioners during the meeting.