On a call with reporters, Assembly Speaker Robin Vos and Senate Majority Leader Scott Fitzgerald said municipalities should be prepared for April 7, but they are not considering altering the date at this time. 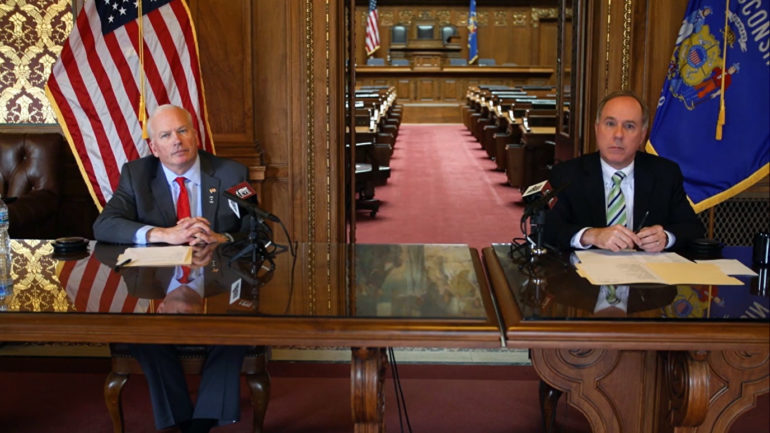 Wisconsin legislative leaders are on board with the governor’s plan to go ahead with the April 7 election, but want to make sure municipalities are prepared to handle the election.

Assembly Speaker Robin Vos and Senate Majority Leader Scott Fitzgerald said on a conference call with reporters that because so many voters rely on the April 7 date, they are hesitant to change the election.

“There are obviously a lot of concerns about what would that look like on election day on April 7, with the amount of poll workers and volunteers that you're going to need, so we're monitoring it very closely,” Fitzgerald said. “But at this point, I don't see a change, really in the April 7 date.”

Their comments come amid rising concerns from municipalities around the state about how to staff and run elections amid the COVID-19 outbreak. Milwaukee Mayor Tom Barrett asked the state government to hold the spring election by mail-in ballots only.

“Every Wisconsinite should feel safe casting a ballot,” said the Rev. Gregory Lewis on a call with reporters. His organization, Souls to the Polls, is among those calling on Gov. Tony Evers to delay the April election. Lewis tested positive for COVID-19 and is quarantined at home. He does not think others who vote in-person or poll workers should come in contact with him or others like him on April 7.

Vos said changes to how the state conducts its elections--including functional changes like waiving the requirement that a witness signs an absentee ballot--should be a last resort.

“Before we would wipe away an entire statute in the law, let's look for strategies to help people achieve the same result,” Vos said. “One of my colleagues had someone who didn't have a witness--he literally went over there, they passed the ballot out through the crack in the door.”

The legislative leaders said they are continuing discussions with the governor on a legislative aid package the state will put forward to deal with the epidemic. Vos said the state is waiting to see what aid the federal government will provide before deciding on specifics at the state level.

During the call, the leaders reiterated their criticism of a lack of communication between the governor’s office and the legislature during the public health emergency.

“The governor has more information than he shared with us, okay, so I have to accept the fact that he is looking at all the facts, and he is trying to make the best decision that he can,” Vos said. “Not having as much information as Governor Evers does, I'm not going to criticize him for [his] 30 days [order], I'm not going to compliment him, because I just don't know.”

Vos and Fitzgerald said they want Wisconsinites to be able to get back to work soon.

“So we want to get this crisis solved, moved on, and be able to get back to as normal as we can, as quickly as possible,” Vos said.