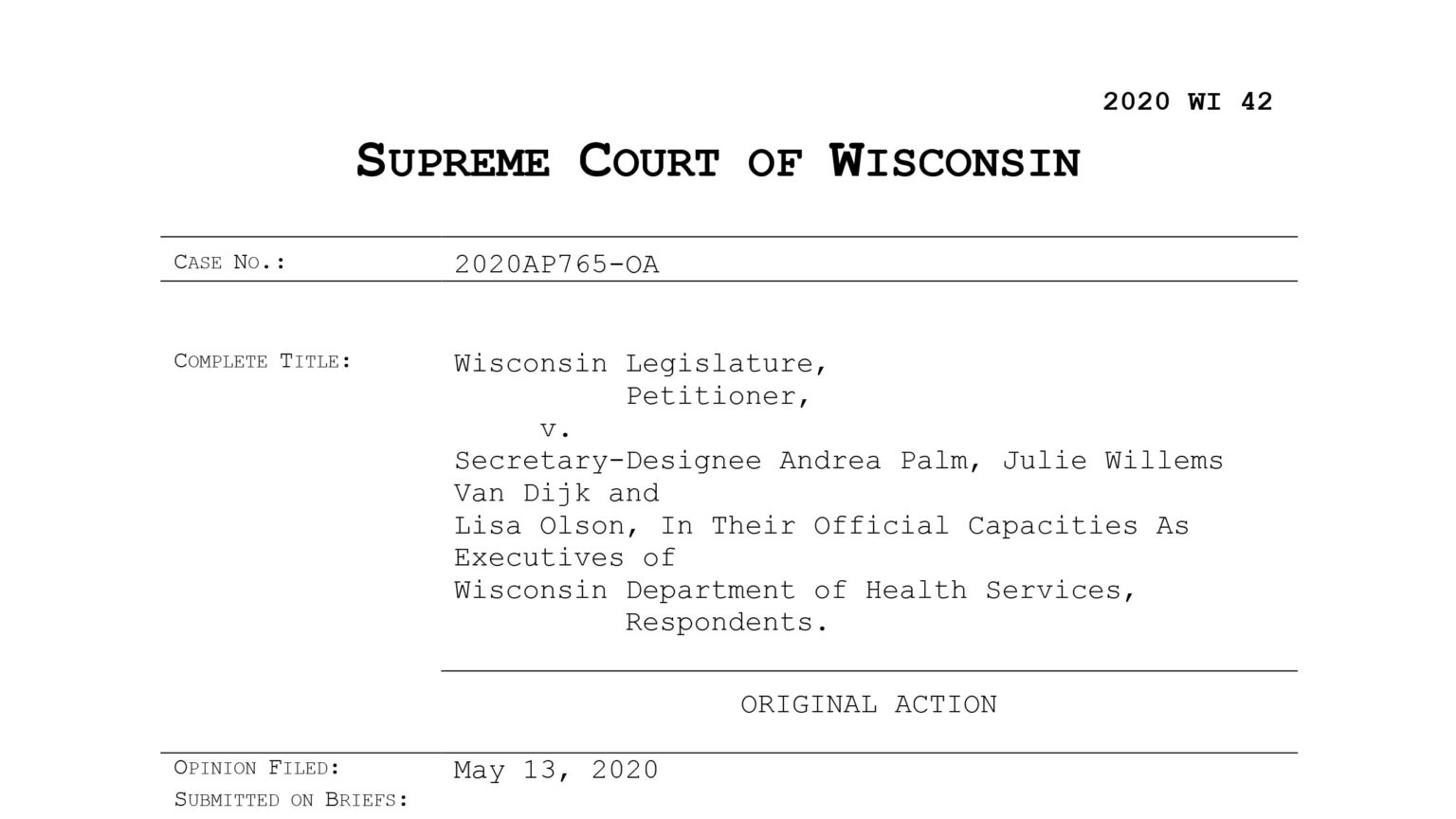 Front page of the Supreme Court's decision striking down the Evers administration's "Safer at Home" order.

Wisconsin’s Supreme Court struck down the state’s “Safer at Home” order Wednesday, leaving Wisconsin with no plan in place to deal with the COVID-19 pandemic.

Gov. Tony Evers said the ruling will undercut the progress the state has made on containing COVID-19. “Republican legislators convinced four members of the Supreme Court to throw the state into chaos,” Evers said on a conference call with reporters. “Republicans own that chaos.”

Four of the court’s five conservatives declared the Department of Health Services secretary does not have the authority to shut down non-essential businesses, restrict non-essential travel or order people to stay at home.

Three different justices wrote dissenting opinions. Justice Rebecca Dallet wrote, “The majority reaches its conclusion by torturing the plain language of [Wisconsin statutes]...This decision will undoubtedly go down as one of the most blatant examples of judicial activism in this court’s history. And it will be Wisconsinites who pay the price.”

The first “Safer at Home” order was issued under Evers’ public health emergency powers. That power expired on May 11, as it is only in effect for 60 days unless extended by the Legislature.

On April 16, Palm extended Evers’ “Safer at Home” order with Emergency Order 28, which used her authority as DHS secretary to control the spread of communicable diseases. Republicans controlling the Legislature sued and asked the Wisconsin Supreme Court to rule the DHS order should have been written as an emergency rule and therefore subject to legislative oversight.

The majority agreed the DHS orders were administrative rules, and while the court ruled Emergency Order 28 was not valid, it did not settle the matter of where the DHS secretary’s powers end.

In a footnote of the ruling, the court wrote “This decision does not apply to Section 4. a. of Emergency Order 28.” Section 4.a. mandates all schools be closed. Yet the decision ends by declaring the whole order unlawful.

While still reviewing the decision, the Wisconsin Association of School Boards wrote in a press release they did not believe the court’s order invalidated the part of the order covering schools, meaning parents should plan to continue keeping children home for the foreseeable future. 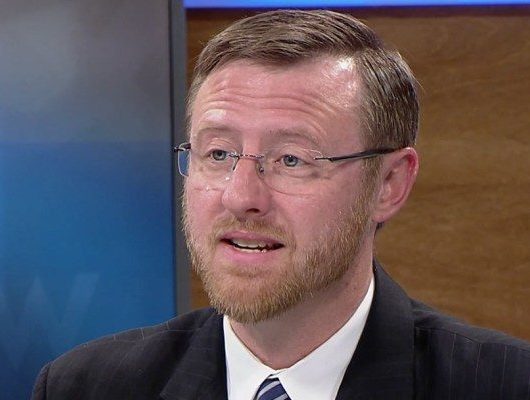 "The legislature may have buyer’s remorse for the breadth of discretion it gave to DHS...But those are the laws it drafted," Justice Brian Hagedorn wrote in his dissent.

Justice Brian Hagedorn wrote in his own dissent the court, “has failed to provide almost any guidance for what the relevant laws mean, and how our state is to govern through this crisis moving forward. The legislature may have buyer’s remorse for the breadth of discretion it gave to DHS...But those are the laws it drafted; we must read them faithfully whether we like them or not.”

Even more confusing was the issue of whether the decision went into effect immediately. In their original lawsuit, Republicans asked the Supreme Court to put a stay on that order for six days so DHS could begin the process of creating an emergency rule. However, three members of the Supreme Court felt an unconstitutional order cannot be allowed to stand.

Justice Daniel Kelly wrote, “What would it mean to stay that declaration? Would everyone have to act like they hadn’t read our decision until the end of the stay? I don’t think staying a declaration of rights that we have just declared would mean anything at all because it couldn’t un-say what we just said.”

In her majority opinion, Roggensack wrote the stay wasn’t needed because, “more than two weeks have passed since we began our consideration of this case. Therefore, we trust that the Legislature and [DHS Sec.] Palm have placed the interests of the people of Wisconsin first and have been working together in good faith to establish a lawful rule that addresses COVID-19 and its devastating effects on Wisconsin.”

But that hasn’t happened. Evers said all along he didn’t need to go through the rules process. He didn’t change his belief while waiting for a ruling on that issue. But Roggensack wrote, “People, businesses and other institutions need to know how to proceed and what is expected of them. Therefore, we place the responsibility for this future law-making with the Legislature and DHS where it belongs.” 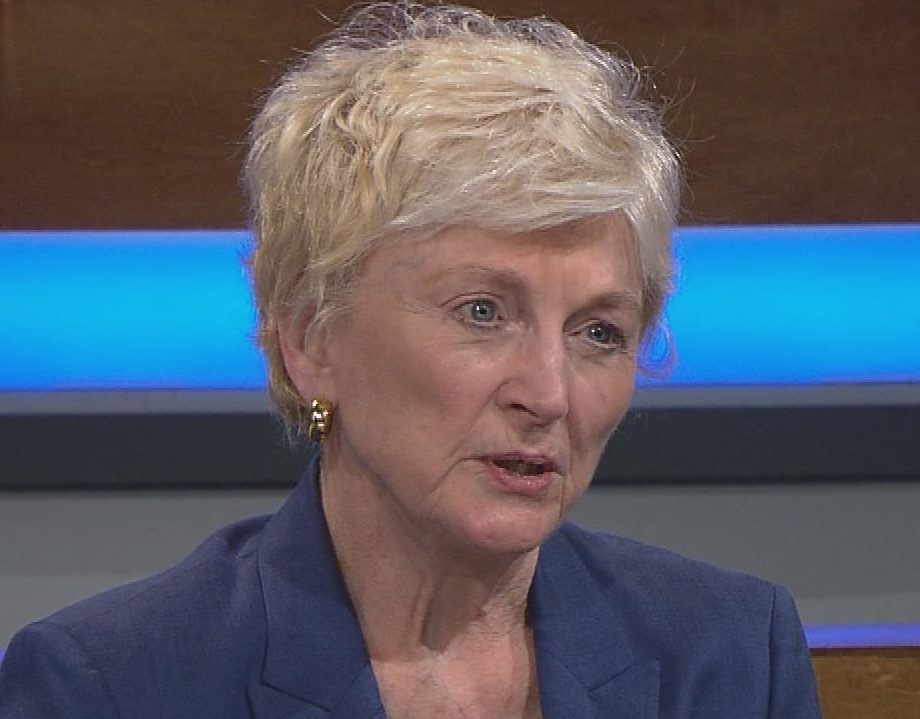 Chief Justice Pat Roggensack said in a concurring decision that she supported a stay. "I too am appreciative of the concerns raised by COVID-19 and the possibility of throwing the state into chaos," she said.

At the same time, Roggensack wrote a concurring opinion to her own majority opinion to say she supported a stay. “I too am appreciative of the concerns raised by COVID-19 and the possibility of throwing the state into chaos,” she said. “Accordingly, although our declaration of rights is effective immediately, I would stay future actions to enforce our decision until May 20, 2020.”

“If you are confused, you are not alone,” wrote Justice Ann Walsh Bradley in her dissent. She said even though a majority of Justices (Ann Walsh Bradley, Dallet, Hagedorn, and Roggensack in her concurrence) supported a stay to give time for an emergency rule to be put in place, it did not count if all four Justices were not part of the majority opinion.

“It is illogical to vote to deny a stay, while at the same time lamenting that because of the way you voted, there is no stay,” she wrote. “If there is no stay, I repeat to the petitioner, the Wisconsin Legislature, the old adage: ‘be careful what you wish for.’ You have come to this court asking that Emergency Order 28 be deemed unlawful and unenforceable. Your wish is granted by today’s majority.”

Even if a stay was issued until May 20, it wouldn’t be enough time for an emergency rule to be put in place. Most emergency rules take nearly a month to go through a multi-step process. During oral arguments the lawyer for Republicans said the best-case scenario would be 12 days. In his dissent, Hagedorn agreed the reason the law gave DHS broad powers in a health emergency was for this reason. “Twelve days is far too long in a real emergency. Epidemics don’t always give you a two-week heads up on their next move.”

Even after 12 days, the emergency rule would be subject to approval by the legislature’s Joint Committee for the Review of Administrative Rules (JCRAR), which could then vote to suspend the rule. Just recently, Republican Assembly Speaker Robin Vos replaced a member of the committee who expected a tough re-election race this fall, with a member who is retiring. Capitol pundits believe that move indicates JCRAR is prepared to overturn DHS rules regarding the COVID-19 pandemic.

Assembly Majority Leader Jim Steineke, R-Kaukauna, issued a statement praising the ruling, but also urged caution. “As we now move to join the many other states who don’t have shelter in place orders in effect, I would encourage those planning to open the doors for the first time to be proactive and smart about finding ways to safely open their businesses,” he said.

Evers told reporters he will issue the framework of an emergency rule to put new regulations in place. But he urged people to be careful in the coming days, despite the lifted orders. "Deadly viruses don’t wait around for politicians and bureaucrats to settle their differences or promulgate rules,” he said.

In response to the court’s decision, municipalities stepped in to issue their own stay-at-home orders in what they said was an effort to stop a resurgence of the virus.

“We have seen that ‘Safer at Home’ is working in Dane County and is slowing the spread of COVID-19,” said Dane County public health director Janel Heinrich. “Continuing public health orders at a local level, which will ensure that we don’t go backwards on the progress that we have made.”

The city of Racine Wednesday night joined Dane County in mirroring locally the state’s former “Safer at Home.” Other municipalities like Wausau and Marathon County steered clear of issuing their own orders.

Will Kenneally and Marisa Wojcik contributed to this report.