In light of the continued spread of COVID-19, the upcoming 2020 Democratic convention will largely be held virtually. 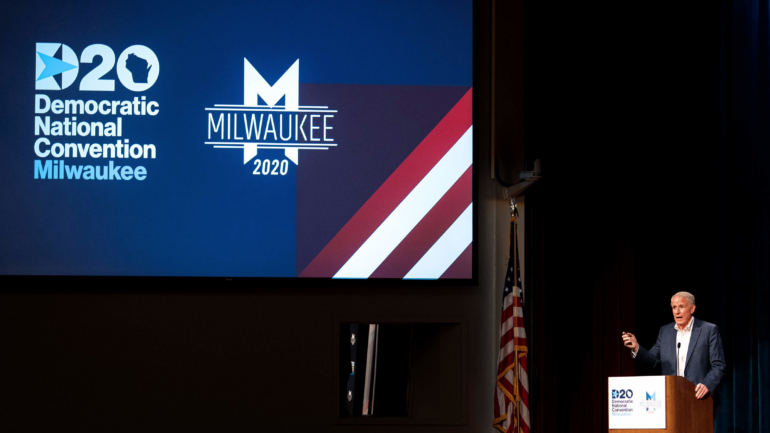 The Democratic National Convention Committee announced Tuesday that in light of the continued spread of COVID-19, the upcoming 2020 Democratic convention will largely be held virtually. Delegates are being advised not to appear in-person and vote virtually.

“After consulting with public health officials about the COVID-19 pandemic, convention organizers are announcing today that they have determined state delegations should not plan to travel to Milwaukee and should plan to conduct their official business remotely,” read a press release announcing the changes.

Delegates will have some in-person representation on the convention floor, but details have to be provided closer to the Aug. 17-20 convention dates for public health officials to provide the best guidance on how many people can safely gather.

Milwaukee has been hit particularly hard by the spread of the SARS CoV-2 virus, with more than 10,000 positive cases and 380 deaths. The activity level for the county, which shows the immediate and project risk of the virus, is currently designated as “high” from the Department of Health Services.

Former Vice President Joe Biden will make a personal appearance and is expected to receive and accept the official Democratic nomination for the November presidential election.

The plan for Democrats to dramatically scale down their massive convention strays from the Republican National Convention, which presently has no plans to limit attendance, reduce events or turn to virtual options.

The bulk of the convention’s remaining programming being held in Milwaukee will be moved to the Wisconsin Center, instead of the originally planned Fiserv Forum, and scaled back. The number of media allowed to attend will be reduced to further reduce potential spread of the virus.

Instead, convention planners said they will carry a broadcast of their main programming happening in Milwaukee, as well as connect to other satellite broadcasts.

Additional Milwaukee-based events that were planned for delegates, media and volunteers, bringing in thousands of people to the area, have all been cancelled.

The reduced footprint of 2020 Democratic National Convention in Milwaukee will be a blow to the area that was anticipating millions of dollars being brought in.