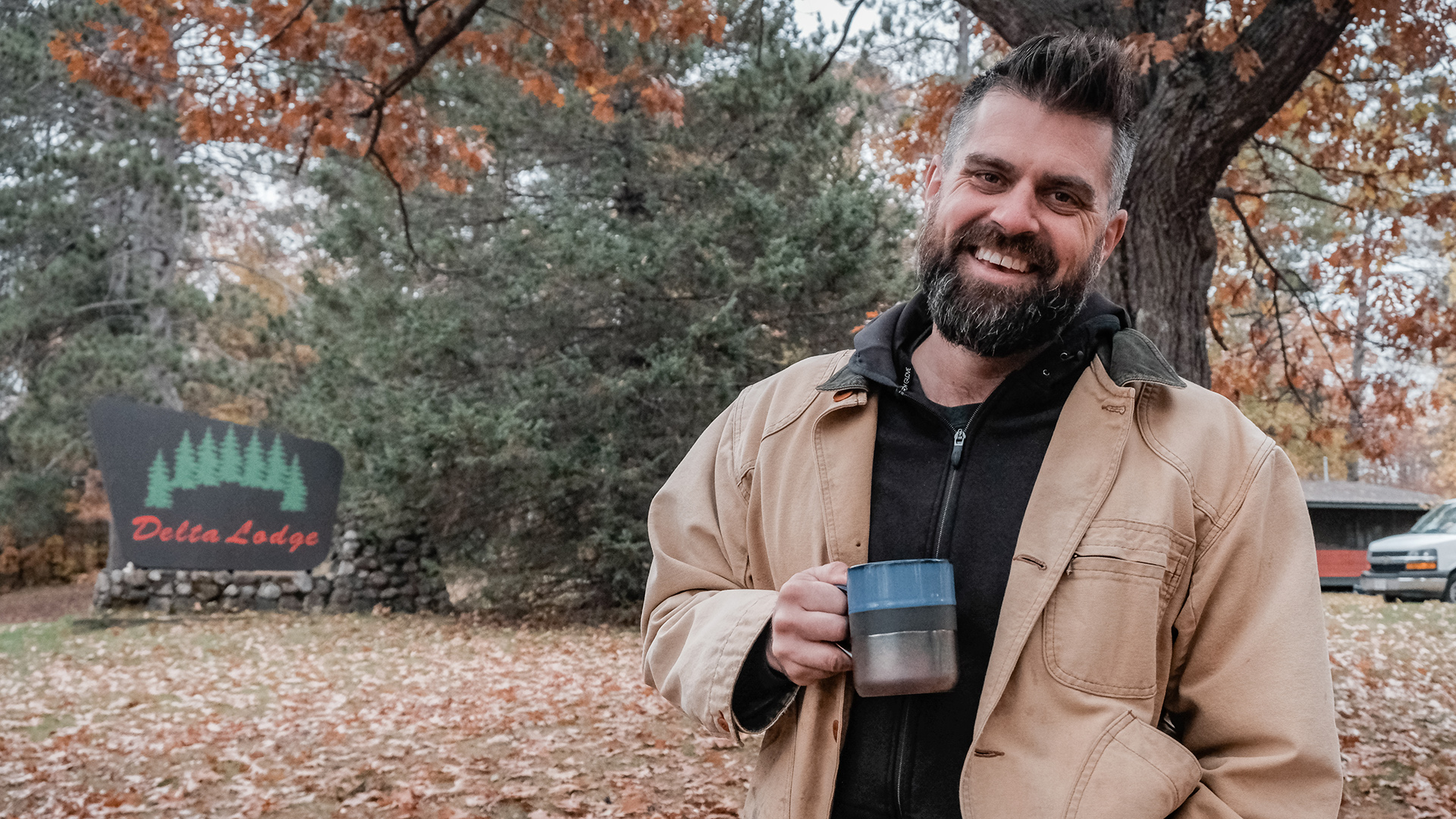 His first season as host – and Wisconsin Foodie’s twelfth in production – had just launched at the beginning of 2020, and he was committed to being in some of the show’s featured communities when their episode aired. He recalls hearing people question whether celebrations should be held for the sturgeon spearing season, and by the end of that week, “it was front and center in the news; all anyone could talk about was how we had to shut down.”

Zahm, who also owns The Driftless Café in Viroqua, returned home and for the next several months, engaged in tough conversations about when, how and if he and the Wisconsin Foodie production crew could get back out on the road to film another season. Fortunately for fans of Wisconsin’s food producers and dining culture, the crew was able to safely adapt to COVID-19 precautions and once again highlight the rich diversity of our state’s culinary heritage with new episodes.

To celebrate Wisconsin Foodie’s upcoming 13th season, we caught up with Zahm to talk about his experience filming during the pandemic and how it changed his perspective on Wisconsin’s culture.

PBS Wisconsin: What was the biggest adjustment to becoming host of Wisconsin Foodie?

Luke Zahm: My hospitality background and the fact that I’m a chef, I’m constantly watching people’s reaction to food. Watching people react to me on TV is this whole different landscape of emotion. You don’t have the crux of putting something in front of them and then letting them evaluate it. It’s a really instantaneous reaction.

PBS Wisconsin: Your chance for that reaction was lost with pandemic-related shutdowns. When were you able to start getting feedback on your first season?

Zahm: That time out on the road is when I was really starting to get people’s feedback about the season. And, it was kind of overwhelming to be honest, because it was the first time I think I ever had where people recognized me and I didn’t know them. It’s a little disarming. For me it’s a whole different growing pain. I had to switch out my cellphone the other day and a guy came into the cellphone dealer here in Viroqua and sat and talked to me for an hour-and-a-half about how much he loves PBS Wisconsin and how that’s the only channel he and his wife watch. He wanted to know everything about Wisconsin Foodie this year and I think it was kind of “becoming the Wisconsin Foodie” a little bit, if there was a manual for it. If there isn’t, maybe I should publish one.

PBS Wisconsin: The restaurant industry is among the hardest hit by the pandemic. How did you approach that topic while filming?

Zahm: We could have done the whole season on COVID-19 and COVID-19 responses, but we also knew we had a responsibility to lift people up. That’s what the rallying cry of Wisconsin Foodie is this year: restaurateurs, food producers and beverage makers are still here. There’s still a vibrant food culture that is alive and well and, as a matter of fact, its resiliency is being tested as we speak. I know when we come through this, we are going to be battle tested and stronger than ever.

PBS Wisconsin: What kind of precautions did you take while filming?

Zahm: We really were very vigilant about making sure we were keeping our subjects safe, because who wants to be the TV show that’s known as the super spreader across the state when you’re bouncing between Native American tribes and small communities and far-reaching corners. You don’t want to make everyone sick. But, dealing with people’s individualized feelings about the pandemic – is it okay if we come inside? We have been tested and we tested every week before we went out on the road. Is it okay if we take our masks off for this segment, and how do we stay socially distanced if we do? That was a really earnest and frank conversation that we had to have with absolutely every subject that we filmed.

PBS Wisconsin: What was the most challenging part about that?

Zahm: The uncertainty. Understanding what do the CDC [Centers for Disease Control and Prevention] guidelines look like today or what’s the community transmission rate look like. One of the last trips we had to do this season was in Green Bay, and it’s when Green Bay was the epicenter of the disease spread in all of the United States. How do you keep a crew safe in those situations? We modified our game a lot. We camped all season long. We didn’t go into hotels. We didn’t go into Airbnbs. We stayed out of people’s homes for the most part. We were absolutely vigilant about keeping ourselves separate and then going in and getting these stories out and then retreating back to the state parks or the campground or sometimes parking lots. We slept in a lot of parking lots this year.

PBS Wisconsin: What can viewers look forward to in the coming season?

Zahm: The season is really good. We found ourselves telling stories of the farmers in Spring Green and Dodgeville – Seven Seeds Organic; it’s a
seventh-generation farm, which is kind of unheard of. But, they are into regenerative agriculture, which is putting animals on pasture and allowing them to put their carbon back into the soil, and it’s a story of resilience and strength. We also talk to the folks at Giant Jones Brewing. It’s an LGBTQ-owned business, and the two women who run it are absolutely strong. They make this beautiful beer that’s out of this world, so good, and it’s really boozy. To hear their perspective on fighting into that culture that’s been traditionally male run for hundreds of years in America, to hear their story about how they worked through that is really inspiring.

PBS Wisconsin: How was this season different for you personally?

Zahm: There’s a learning curve to just becoming comfortable on camera and understanding how that comfort translates to the folks you’re interviewing as well. The last season I would get a lot of directorial notes as I was filming, and I would go in and be able to re-create those questions immediately in my own words. This season they really gave me a lot of latitude to work into subjects and their energy which is something that I really appreciate. Sometimes it’s a little bit of quick back and forth, sometimes it’s funny, sometime’s it’s jokes, sometimes it’s absolutely serious and it allows me to acclimate to their energy and their presence.

PBS Wisconsin: Has being host of Wisconsin Foodie changed your perspective on our state and its culture?

Zahm: I’m so proud of Wisconsin. Honestly. In this day and age, there’s no shortage of information, there’s no shortage of communication, and I think that the way we as a state have responded to the pandemic, the way that we’ve responded to being a battleground state in the 2020 presidential
election, there’s a possibility that all of this could be extremely divisive and terrible, quite frankly. But, I do want to say that once we broke down those initial barriers with people and got through some of those feelings, we share a common core of resilience, of neighborly, of being “Midwest Nice.” I am so thankful for that, and I sincerely hope that that is the spirit that will carry us into 2021.