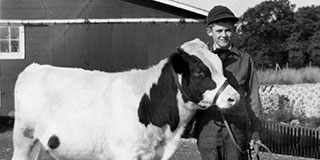 Jerry Apps has made a living on the farm. Born into farm life in the midst of the Great Depression, the hard-working boy has developed into one of the country’s great storytellers. He’s the author of more than 30 books with titles like When Chores Were Done, One-Room Schools and Country Ways and Country Days.

And now, Apps is the subject of the new Wisconsin Public Television documentary Jerry Apps: A Farm Story. Last winter, Jerry Apps worked with producer Mik Derks (Wisconsin Vietnam War Stories) to record his story of life on the farm.

With a gentle snow falling outside the farmhouse, Apps reminisces in the film about chores on the farm, raising – and butchering – chickens, his mother’s efforts to can everything, and of course, the long days. With a chuckle, Jerry echoes one of his dad’s mantras, “A tired kid is a good kid.”

A Farm Story will touch the hearts of anyone with memories of an age when siblings worked an entire field by hand. And newer generations will find inspiration in the importance of community, work ethic and sustainability.