"I think being creative in Wisconsin has helped me to find my voice. There's not many people like me being represented on the creative side. So it's, I believe, up to me and like creatives to just get out there and do."—Mike Lroy

Angela sits down with Mike Lroy, the artist and set designer for season 2 of Why Race Matters. Lroy talks about his practice, the significance of making art in Wisconsin, the coexistence of pain and joy in his work, and his inspiration to keep anti-racist social movements flourishing through art and creativity. 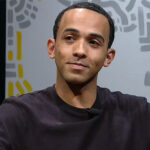 Mike Lroy is a Wisconsin artist, leaving his mark with large-scale murals and other artistic collaborations. As an artist, he aims to unify and represent the midwest through creative avenues. Lroy created the set for season 2 of Why Race Matters. Learn about him and more of his work at www.mikelroy.com.

Angela Fitzgerald: So, Mike, thank you so much for joining us today.

Mike Lroy: Of course, thanks for having me.

Angela Fitzgerald: I have to say thank you for the artistic additions to our Why Race Matters season two set. It’s definitely a visual upgrade for us, so thank you.

Mike Lroy: Thank you, thank you. It was a pleasure to make.

Angela Fitzgerald: So what got you into the art world?

Mike Lroy: Well, I’ve always been an artist. I moved to Madison in 2011, I believe. And I took it seriously in 2013 in response to some police brutality issues in Madison, and ever since then, I’ve just been walking in my strength, creating every day.

Angela Fitzgerald: Wow, so for you, it was a way of like, expressing yourself in response to what was going on around you?

Mike Lroy: Yeah, initially, it was just about getting that frustration and anger out, and now it’s to inspire people like me to get their voices out as well.

Angela Fitzgerald: Oh, wow. So it’s not, essentially it’s not just about you or doesn’t just end with you. It’s a mode of inspiration for others.

Mike Lroy: It’s definitely not about me. It is. . . I’m walking fully in my power to inspire others to get out there and make changes, to voice their opinions, to hear themselves in the street.

Angela Fitzgerald: Mm, okay. And you said you’ve been in Wisconsin for about a decade or so as of this point. So what is the significance of the art you do and the source of the art that you do within this particular state?

Mike Lroy: I think being creative in Wisconsin has helped me to find my voice. There’s not many people like me being represented on the creative side. So it’s, I believe, up to me and like creatives to just get out there and do.

Angela Fitzgerald: So are you seeing that, especially in response to y’know, media stories of racial injustice and things like that? Are you seeing more people like you who have this gift? ‘Cause I would love to be able to do something like this. I cannot. But for those who actually have artistic skills, like articulating and expressing themselves more in that way?

Mike Lroy: Yeah, I saw a big turning point in 2020 in response to George Floyd. That was when it kinda snapped. So now I’m seeing more people like me being represented all over.

Angela Fitzgerald: So definitely the importance and value of Black art, it sounds like in general, but also in a setting like here, where representation might be more significant.

Angela Fitzgerald: Okay, beautiful. And I get to this kind of juxtaposition of there’s maybe pain at the source or embedded within the source of the art, but also joy attached to it as well. So can you kind of, for people who don’t understand that both can coexist, especially in art, what that means?

Mike Lroy: Yeah, both pain and joy can exist with the artwork. So all of my art is an expression of that joy and that celebration of not only being a Black creative, but just being a creative human. And, yeah. [chuckles]

Angela Fitzgerald: Okay. Is there like a singular or a couple sources of inspiration that you draw from in the art community?

Mike Lroy: Honestly, the creation is to keep this movement going. That is it. I just want to just continuously inspire every day.

Angela Fitzgerald: Okay, okay, wonderful. And so what does that look like for you when you like, encounter people who, I don’t know, are maybe struggling with artistic expression and maybe need a source of motivation? Like what is that? What might you draw from to encourage them in that way?

Mike Lroy: Let’s see; honestly, being yourself is the only advice I can give.

Mike Lroy: Because we all have our individual perspectives on life and Earth, and it’s important to share yours, because there’s no one like you.

Angela Fitzgerald: Right. So regardless to what you’re contributing, it is special and unique in its own right. Because like you said, no one else can do exactly what you’re doing.

Angela Fitzgerald: Do you have any like, future plans or any big ideas about your art that you’re looking forward to realizing in the future?

Mike Lroy: No future plans. I just live day by day, and here I am. [both laughing]

Angela Fitzgerald: I would love to be like you. I feel like my analytical mind won’t let me do it. Like, 5-year plan, 10-year plan, I’m just gonna keep at it. Maybe that reduces anxiety too, to just kind of be.

Mike Lroy: Yeah, yeah. Something that contributes to this freedom is investing. So I taught myself how to invest in order to create as much as I can.

Angela Fitzgerald: Mm-hmm, wonderful. So you mean like, financially investing?

Angela Fitzgerald: Oh, very nice. So that helps you to sustain your livelihood as an artist?

Mike Lroy: Yeah, well, when I began, I took this business seriously, and so just like any other business, you have to invest. And so I taught myself how to do that, and now I have the ability to create on my schedule and design things that I think fit projects like this.

Angela Fitzgerald: I love that. I love that you’re focused on both the creative side of the art world, but as well as the business side, so you’re not the stereotypical starving artist in that way.

Angela Fitzgerald: We can have an offline conversation about your investing approach and what’s worked well for you.

Mike Lroy: Yeah, I hope not only do I inspire creatively, but financially as well. To be financially literate.

Angela Fitzgerald: Love that. And I can’t negate the shoes that you’re wearing, because I’m in a family of sneakerheads. So if you want to direct our attention to like, to the uniqueness of the shoes and any background you want to give to that.

Mike Lroy: Sure. These are Jordan, designed by Virgil Abloh from UW-Madison. Rest in peace. This is me just paying some respect to someone that paved the way.

Angela Fitzgerald: Is there anything as a close that you’d like to share with anyone who’s hearing your story, seeing your art, being inspired, but maybe, I don’t know, maybe not feeling as free or feeling stuck in some ways? Like, what would you tell them to encourage them?

Mike Lroy: That’s all I can say, is just start. It’s better to start today than to put off and hesitate.

Angela Fitzgerald: Awesome, thank you so much, Michael.