Health care professionals and officials are bracing for COVID-19 patient numbers to continue rising in the state’s largest wave of infections in nearly a year as students return to classes. 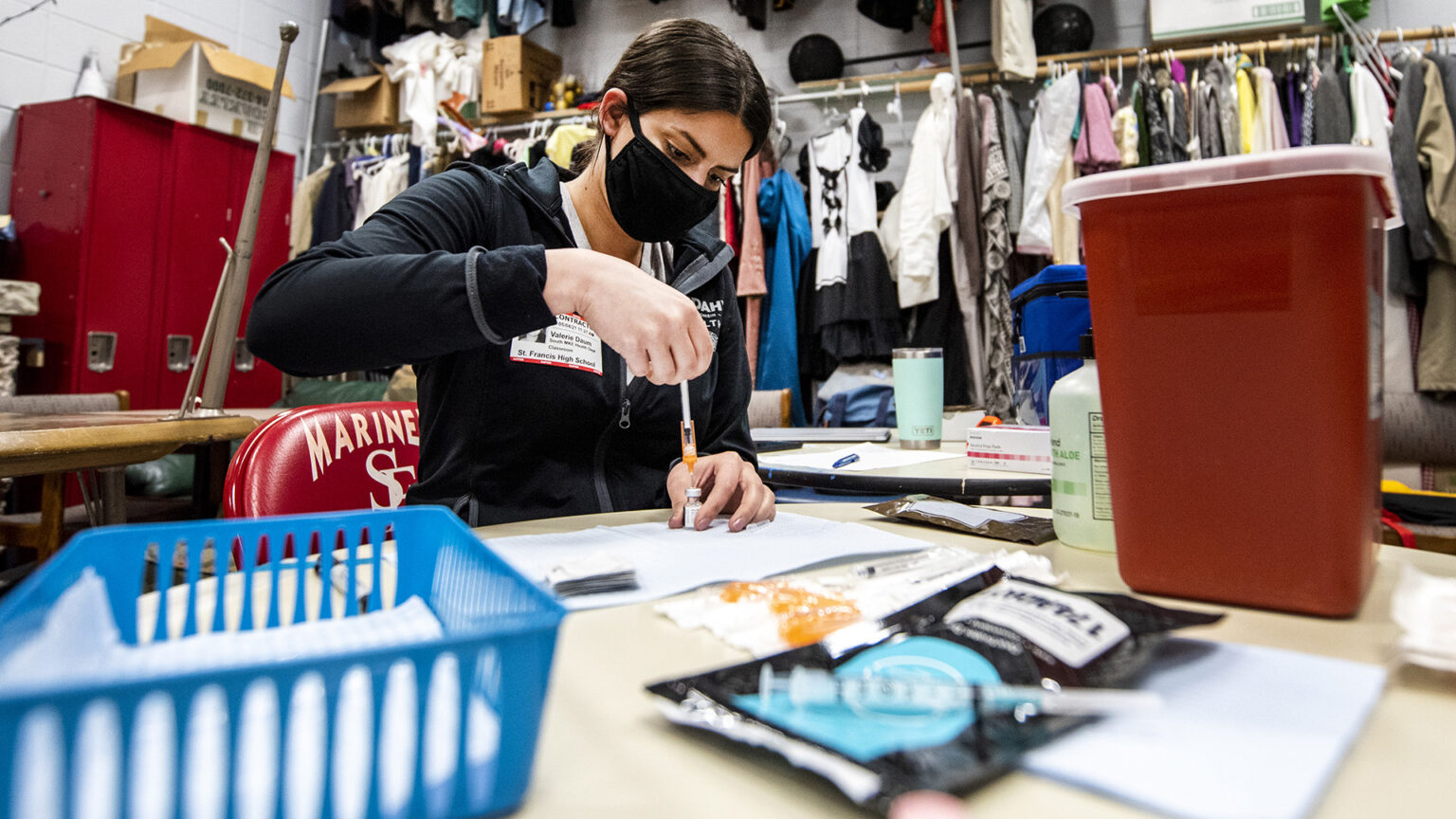 The start of a new school year in September 2020 marked the outset of the biggest COVID-19 surge in the pandemic, and as students across Wisconsin once again return to classes a year later, concerns are growing among parents and public health officials about the prospect for a repeat ordeal.

The Delta variant of the coronavirus has already hit the state hard. As of the start of September 2021, the numbers of new cases and hospitalizations had climbed to their highest levels since January. Yet health professionals are bracing for this wave to continue to build, even as vaccinations numbers creep upward and more mandates for employees and customers to get them are implemented. Here's the status of the COVID-19 pandemic in Wisconsin.

The wave hitting Wisconsin as the summer of 2021 ends is the state's fifth in the pandemic — since starting to build steam at the end of July, it has become the second largest in terms of cases and hospitalizations. On the other hand, the number of deaths has not grown at the same rate, reflecting in part the widespread level of vaccinations among senior citizens, who have had the highest mortality rates during the pandemic.

As of Sept. 2, Wisconsin's 7-day average for new confirmed cases had reached 1,702. That's well more than double the 7-day average of 781 reported a month earlier and the highest that figure has been since mid-January.

The number of COVID-19 related hospitalizations in the state is also continuing to climb and is swiftly reapproaching the 1,000 mark. On Sept. 3, there were 978 people hospitalized for COVID across the state, according to the Wisconsin Hospital Association. Nearly a third of hospitalized patients were receiving intensive care.

New deaths have also risen since mid-summer lows, though more slowly. The 7-day average for new deaths reported stood at eight at the beginning of September, near where it has been for more than a week, and a level previously reported in late February.

Wisconsin's worsening outbreak, driven by the extremely contagious Delta variant, underscores the urgency state and local health officials feel as they try to head off a surge like one that began a year earlier. Wisconsin's fall 2020 surge peaked in mid-November, straining hospitals across the state.

The Delta-fueled wave is generally sending younger patients to the hospital, according to health officials in western Wisconsin, as younger age groups lag in getting vaccinated. The region is seeing increasing transmission, which has hospital officials on edge as nurses and doctors deal with fatigue and frustration a year and a half into the pandemic. Hospitals have resorted to bonuses and temporary labor to cope with the surge in patients.

While much of that frustration is directed at people refusing to get vaccinated, some also centers on the continuing promotion by some prominent individuals, including Wisconsin Republican U.S. Sen. Ron Johnson, of medications like ivermectin that are not approved for treating or preventing COVID-19.

The rate of COVID-19 vaccinations in Wisconsin continues its slow climb. The first five million doses in the state were administered within five months, but it took another three months to reach the six million mark. As of Sept. 2, at least 6,142,156 doses have been administered to Wisconsinites. In terms of how many people that amount covers, a total of 3,205,962 residents have received at least one dose, accounting for 55.1% of the state's population, and 3,011,444 residents have completed the vaccination series, or 51.7% of all residents. The percentage of Wisconsin residents fully vaccinated is close to the national average.

Vaccination rates continue to vary by age, with increasingly higher levels among older Wisconsinites. By comparison, more than four-fifths of the state's residents older than 65 are fully vaccinated, while just over one-third of those 12-to-15 years old, the youngest eligible age group, have completed the series. A distinct gender gap in which more women than men have gotten the vaccine continues, as do racial and ethnic disparities in vaccinations, with Asian and white residents having considerably higher rates than Hispanic, Native American and Black Wisconsinites.

While surveys have found that a significant proportion of those who have not been vaccinated refuse to do so, there are also many people who have delayed or neglected vaccination yet remain open to do so. Outreach campaigns to assist those who need help getting access to vaccinations have continued in Wisconsin, offering flexible hours, translation services and concerted efforts to build trust among diverse populations. Since June, the rate of new vaccinations has been higher among Hispanic, Native American, Asian and Black residents than white Wisconsinites.

Broader incentive programs continue as well around Wisconsin. Several tribal governments in the state are offering $500 for their members and employees to get vaccinated, including those who have already completed their series. Meanwhile, the state is offering a $100 gift card to people who haven't been vaccinated but get their first dose. Originally set to run from Aug. 20-Sept. 6, the incentive was subsequently extended to Sept. 19.

Meanwhile, vaccination requirements for employees, students and customers continue to be adopted by different institutions around the state, including hospital systems, colleges and universities and live performance venues. One Sept. 1, a group of around a dozen performing arts organizations in Milwaukee announced that they would be requiring proof of vaccination or a recent negative COVID-19 test result for their attendees. Milwaukee County is also requiring all non-union represented employees be vaccinated by Oct. 1, or they may otherwise be denied overtime or promotion opportunities.

School districts and colleges and universities across Wisconsin were welcoming students into classrooms at the start of September, some with more COVID-19 precautions in place than others, just as new cases among children reached their highest level since December 2020.

While masking and vaccine requirements vary by location, the Delta variant is driving up new infections in adults and children alike. All children younger than 12 remain ineligible for COVID-19 vaccines, while data from the state health department show that less than half of Wisconsinites ages 12 to 17 had begun the vaccination series as of Sept. 1.

Many of the state's largest school districts have heeded state and federal recommendations to require universal masking indoors. On the eve of the new school year, the Madison Metropolitan School District, the state's second-largest, announced that universal masking would be required outdoors as well as inside for its elementary and middle schools.

At the same time, many districts in the state are not requiring masks as the hot button issue continues to rile communities.

However, a push to require vaccinations among teachers and school staff has gained momentum. On Aug. 30, the Madison school board unanimously voted to direct the district to prepare a plan for requiring vaccinations among teachers and staff. Two days later, the Wisconsin Education Association Council, the state's largest teachers' union, came out in support of requiring teachers to be vaccinated or face routine COVID-19 testing.

Delta is also driving high demand for virtual schooling options being offered by a small number of districts in the state.

Sept. 1 marked the beginning of classes at the University of Wisconsin-Madison, which reported a vaccination rate of 90% among students, faculty and staff at the start of the semester. Students there expressed cautious optimism that the fall 2021 semester would feel more normal than previous pandemic terms given the high vaccination rate.

While none of the state's public universities, including UW-Madison, are requiring COVID-19 vaccinations, all have universal indoor masking policies and various testing regimes for unvaccinated students and staff in response to the Delta variant.

The rules have split Republicans in the state Legislature. State Sen. Steve Nass, R-Whitewater, has requested that Republican legislative leaders  sue the UW System over its refusal to submit COVID-19 rules to the Legislature's administrative rules committee which Nass chairs. However, including Assembly Majority Leader Jim Steineke, R-Kaukana and state Sen. Rob Cowles R-Green Bay, have said they do not support suing over the UW System's pandemic policies.

Gov. Tony Evers, a Democrat, has called legislators' attempt to control the UW System's COVID-19 response as "not a good thing" and expressed his support for giving universities flexibility to determine their own safety precautions.