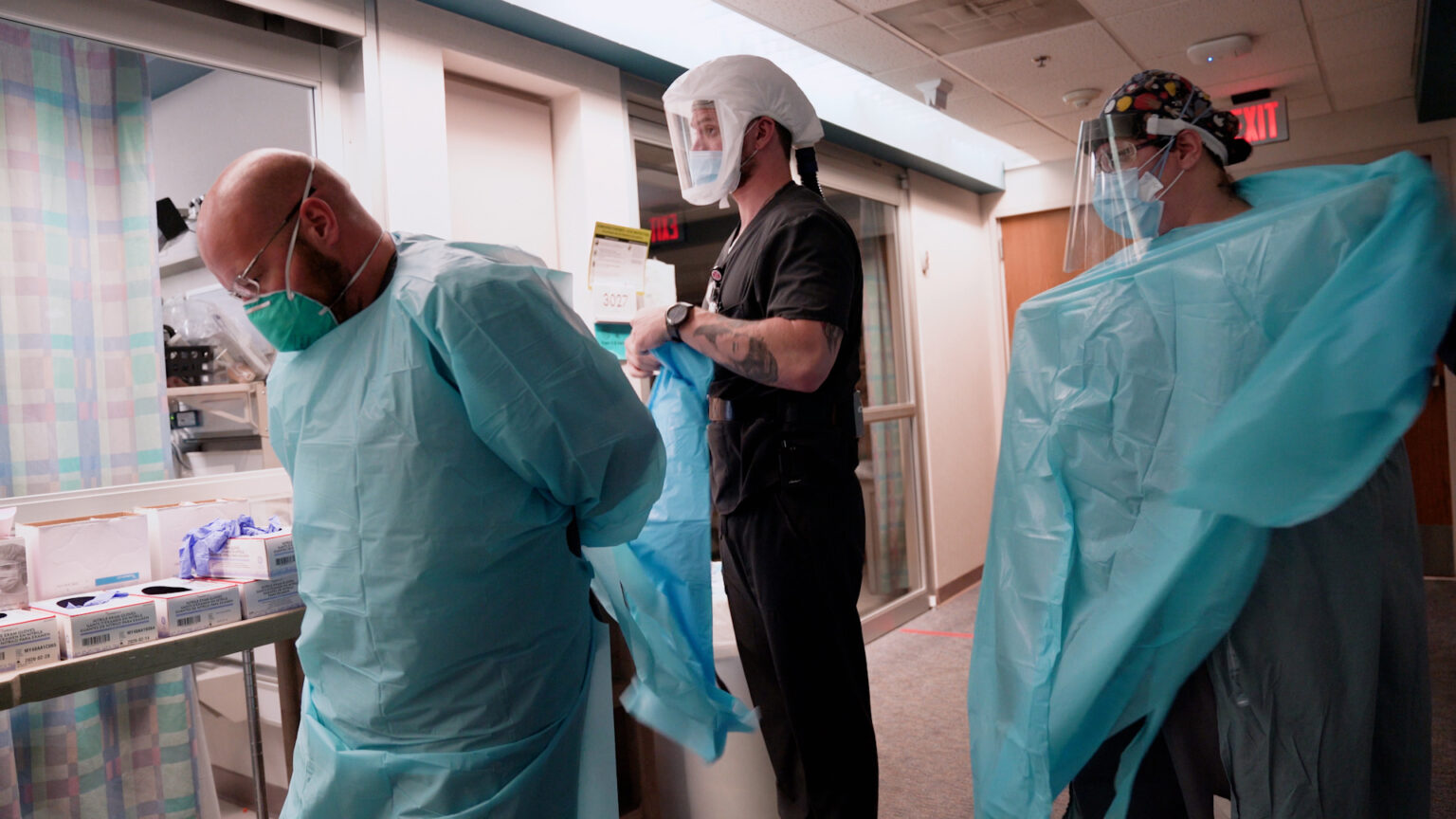 Wisconsin is continuing to rack up thousands of new COVID-19 cases each day as the extremely contagious Delta variant spreads. The high rate of new cases means a growing number of hospitals around the state are coming dangerously close to running out of space for sick patients and protective equipment for staff and caregivers.

Meanwhile, the Centers for Disease Control and Prevention has approved booster shots for some recipients of the Pfizer vaccine. Here's the status of the COVID-19 pandemic in Wisconsin.

The latter half of September has been marked by an ongoing rise in new covid cases in Wisconsin, with the 7-day average for new confirmed cases increasing from 1,861 on Sept. 14 to 2,746 on Sept. 23.

A continued rise in hospitalizations has followed. As of Sept. 24, the Wisconsin Hospital Association reported 1,072 patients were hospitalized for covid across the state, including 335 in intensive care.

The rise in severely ill covid patients is stressing hospitals, particularly in northern and western parts of the state. Across Wisconsin there were fewer than 100 ICU beds available on Sept. 23, with only four ICU beds available across a 22-county swath of western and northwestern Wisconsin.

The number of hospitals in Wisconsin reporting low supplies of medical-grade face masks has risen sharply since the end of August. Sixteen hospitals reported having less than a week's worth of N95 masks on hand as of Sept. 24, compared to just two hospitals on Aug. 31.

The situation is increasingly stressful and frustrating for hospital staff, who only a couple months earlier were hopeful the worst of the pandemic was behind them.

"The pandemic was looking like it was essentially over two months ago. We had zero to two, maybe three, [covid] patients in the hospital," said William Melms, chief medical officer at the Marshfield Clinic in Wood County in central Wisconsin, in a Sept. 17 interview. "Today, we have 78 patients in the hospital … we have grave concerns yet that we're not near the end of this surge."

While many people hospitalized for covid recover, their recoveries can be grueling and extend for long periods, particularly if they required long stints on a ventilator. Two high-profile individuals who have been hospitalized and placed on a ventilator during the Delta surge in Wisconsin — Cardinal Raymond Burke and state Sen. André Jacque, R-De Pere — are among those patients undergoing rehabilitation following their stays in the ICU.

"People who have severe COVID-19 and who recover, particularly those who have required mechanical ventilation, are going to need some rehabilitation and a good amount of time before they get back to their baseline health status," said Dr. Ryan Westergaard, state epidemiologist for communicable diseases, during a Sept. 22 media briefing.

"People who have severe lung injury and require an ICU stay have a long, long recovery," Westergaard said, noting that many of these covid patients are dealing with long-term fatigue and negative mental health symptoms long after being released from intensive care.

"We're still learning about those things as we go," he said. "But this virus seems to have some unique characteristics that cause multiple systems to take a long time to recover."

Westergaard said that while some prominent models show covid cases peaking nationally in late September, any peak in Wisconsin is not yet apparent.

A majority of people who come down with severe covid are unvaccinated. In August, the Wisconsin Department of Health Services reported that the hospitalization rate for people who were not fully vaccinated was more than three times higher than the rate among fully vaccinated people.

Due to differences by age group in the percentage of Wisconsinites who are vaccinated and who become seriously ill with covid, the state health department also reports age-adjusted breakthrough statistics. After adjusting for age, DHS reported that people who were not fully vaccinated in August were 8.6 times more likely to be hospitalized for covid and 10.6 times more likely to die from it.

Wisconsin's former lieutenant governor, Rebecca Kleefisch, is among those who have tested positive for covid after being fully vaccinated. Kleefisch, a Republican who announced her candidacy for governor earlier in September, shared her covid-positive status on Sept. 20, adding that she felt fine but would be isolating for several days.

In response to the growth in breakthrough hospitalizations and deaths, mostly among older people, the CDC on Sept. 24 approved booster shots for some recipients of the Pfizer vaccine. More than 1.7 million Wisconsinites have received that particular vaccine. The CDC approved boosters for people 65 and older, those who live in long-term care facilities and adults with certain pre-existing medical conditions.

Meanwhile, more than 40% of Wisconsinites remain unvaccinated, and the number of people newly seeking shots has dropped off in September, particularly after a $100 state incentive expired on Sept. 19.

On Sept. 21, Milwaukee Mayor Tom Barrett announced a new $100 incentive for any city resident who gets vaccinated beginning Sept. 23. About 55% of Milwaukee County residents have received at least one dose of vaccine, though vaccination rates remain below 30% in some areas centered around the north side of Milwaukee.

Marisa Wojcik contributed to this report.