Social media users on Election Day are distorting a clip of a Madison poll worker doing his job to falsely claim it shows election fraud in Philadelphia. 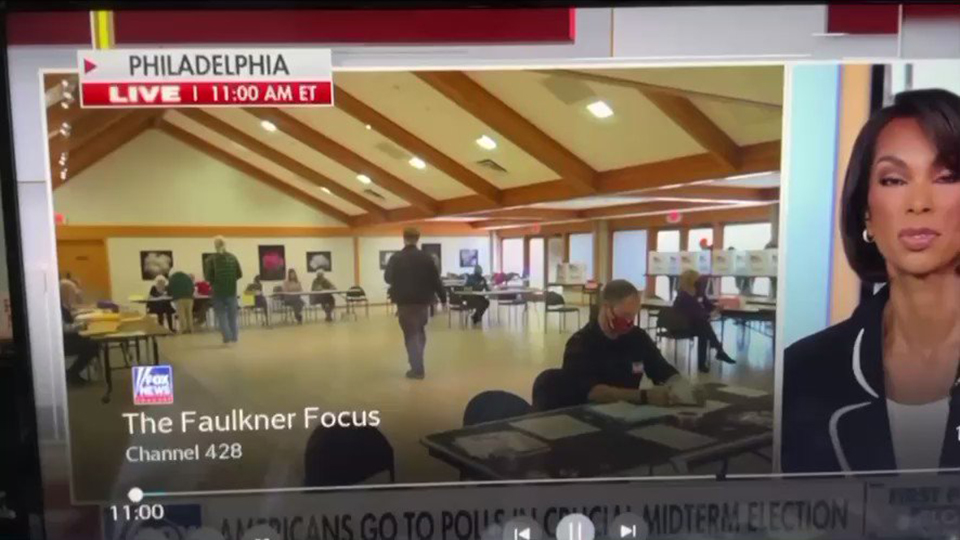 A screenshot of a video shared on Twitter shows a still image from a Fox News broadcast that labels a polling place in Madison as being located in Philadelphia. (Credit: Screenshot via Twitter)

AP'S assessment: False. The video shows a poll worker in Madison, Wisconsin, on Tuesday. He was initialing ballots to be handed out to voters, a standard procedure mandated by state law, said Dane County Clerk Scott McDonell.

The facts: Social media users on Election Day are distorting a clip of a Madison poll worker doing his job to falsely claim it shows election fraud in Philadelphia.

The video, first aired on the Fox News show "The Faulkner Focus" on Nov. 8, shows a man wearing a cloth face mask flipping through ballots and writing on them. Footage from the broadcast was shared by social media users who misrepresented the contents.

"Masked man cheating in front of the cameras on the mainstream media," read a widely shared tweet with the video. "You can't make it up. Make him famous. #Philadelphia #pennsylvaniafraud." The Twitter user was later suspended.

The original footage shows the video was filmed in Madison, not Pennsylvania. Immediately before Fox News showed the clip in Madison, the network showed the exterior of Philadelphia's East Passyunk Community Center with a graphic labeling that location. The broadcast then switched to the clip of the poll worker and changed the location in the label to Madison. Social media versions of the video cropped out the location.

A reverse-image search of the building's interior revealed that the clip was filmed at Olbrich Botanical Gardens in Madison, which served as a polling location for the Nov. 8 election.

McDonell, the Dane County Clerk, said the man is a poll worker, and the video shows him initialing ballots before they were handed out to voters. He was also circling the ward in which the ballots were issued.

It's part of the process of preparing the ballots for voters, McDonell said. Another poll worker also initialed the ballots before they were handed to voters.

"Each ballot will have two signatures on it," McDonell said.

"You need to have those signatures to show that two people saw the blank ballot and handed it to the voter," McDonell said. "This is a standard operating procedure. It's done in public so that anyone can watch it. It's mandated by state law. It's a check and balance on the system. He's doing exactly what he's supposed to be doing."

Barry Burden, a University of Wisconsin-Madison political science professor and the director of the Elections Research Project, agreed that the video showed standard procedures for poll workers in Madison.

Wisconsin election law explains that at polling places with paper ballots, two inspectors "shall write their initials on the back of each ballot and deliver to each elector as he or she enters the voting booth."

Philadelphia's city commissioner on Twitter debunked the false claims that the video showed a polling site in his city, calling the posts "dangerous misinformation."

Nick Custodio, deputy commissioner with Philadelphia's elections board, told the AP that Philadelphia does not use paper voting booths and that each polling place has voting machines with 32-inch screens, unlike what is shown in the video. He said the "I voted" stickers in the video also do not match those used in Philadelphia. Further, regulations in Philadelphia do not allow filming inside of polling sites.

Associated Press writers Amy Forliti in Minneapolis and Claudia Lauer in Philadelphia contributed to this report.

This is part of AP's effort to address widely shared misinformation, including work with outside companies and organizations to add factual context to misleading content that is circulating online. Learn more about fact-checking at AP.