'The Middle of a Massive Contamination': Marinette and Peshtigo Residents Struggle with Aftereffects of PFAS
Skip to content

Four years after a facility disclosed water contamination in the region, residents in the northeast corner of Wisconsin deal with the impact of dangerous "forever chemicals." 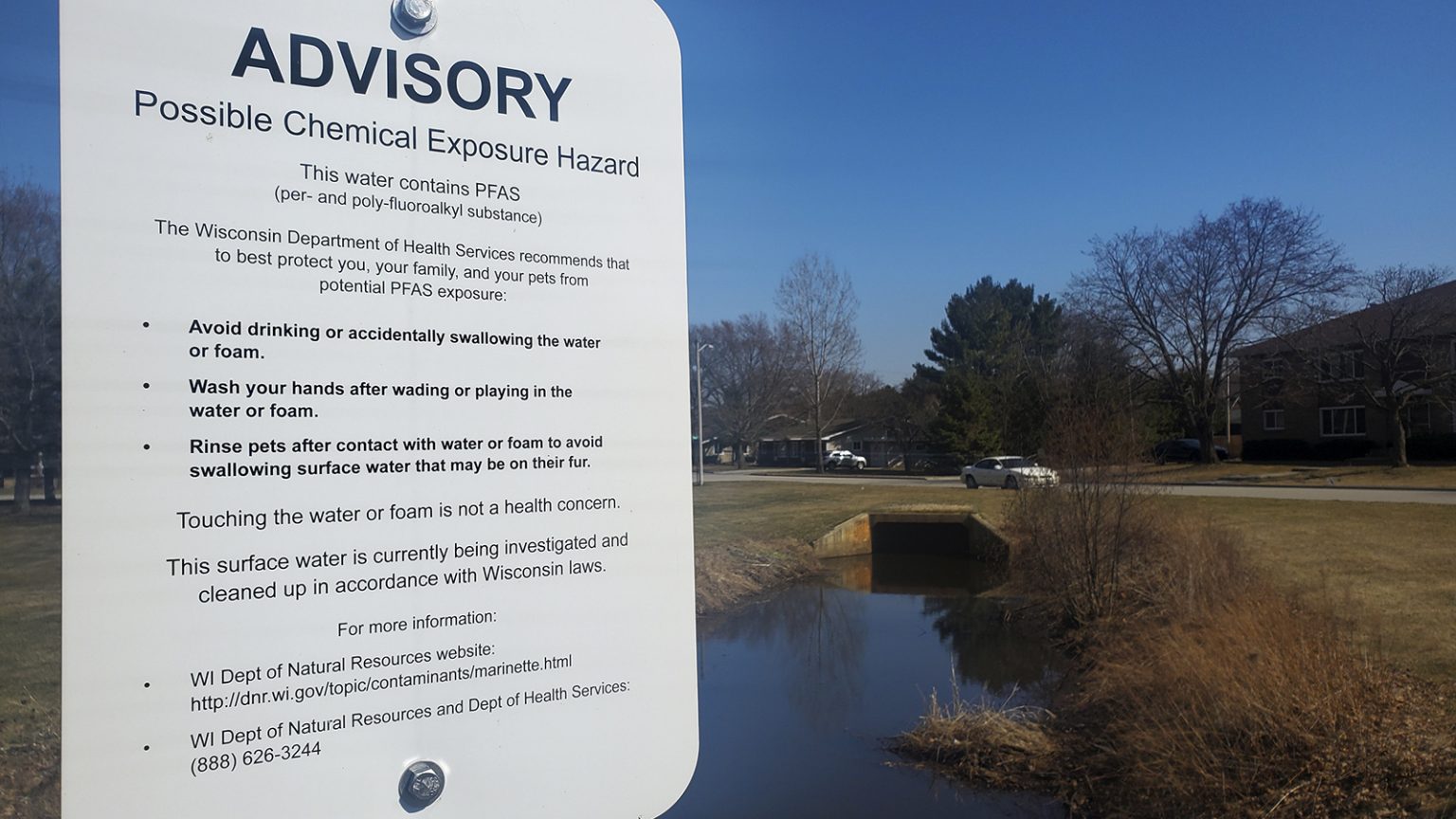 Signs posted along a ditch running through a southern Marinette neighborhood warn against exposure to the forever chemicals known as PFAS on April 5, 2021. (Credit: John McCracken / The Midwest Center for Investigative Reporting)

How Wisconsin Grapples With PFAS

As a kid growing up in the northern Wisconsin port city of Marinette, Koller didn't think much of being around the facility or drinking the city's water.

"How would you have known? There's no signs (at that time) saying, 'Stay out: contamination,'" Koller, 32, said.

But Koller's formative years in Marinette likely altered his life forever: Right after graduating from high school in 2007, he was diagnosed with testicular cancer.

The chemicals from the JCI facility contaminated the area's drinking water. Polyfluoroalkyl substances, or PFAS, are a group of man-made chemicals found in products such as household cleaners, paint and firefighting foam that are linked to infertility in women, stunted developmental growth and kidney and testicular cancers. While the problem has garnered legal and state attention, residents are forced to reckon with the contamination's impact on their community — from using bottled water to cook to suffering from cancer.

"We've got woods and waterfront and an amazing community," said Kayla Furton, a current Peshtigo supervisor who bought her childhood home from her parents five years ago. "What we came to know is we were moving our family into the middle of a massive contamination."

People in the area — including the town of Peshtigo, the subject of a lawsuit over the contaminated drinking water — are familiar with cancer.

Koller said he knows of three other men out of the about 75 in his high school's graduating class who have had testicular cancer. Compared to the national average, he and his classmates were roughly 10 times more likely to have the disease.

"I always made jokes back then about, you know, there's something in the water in Marinette," he said. 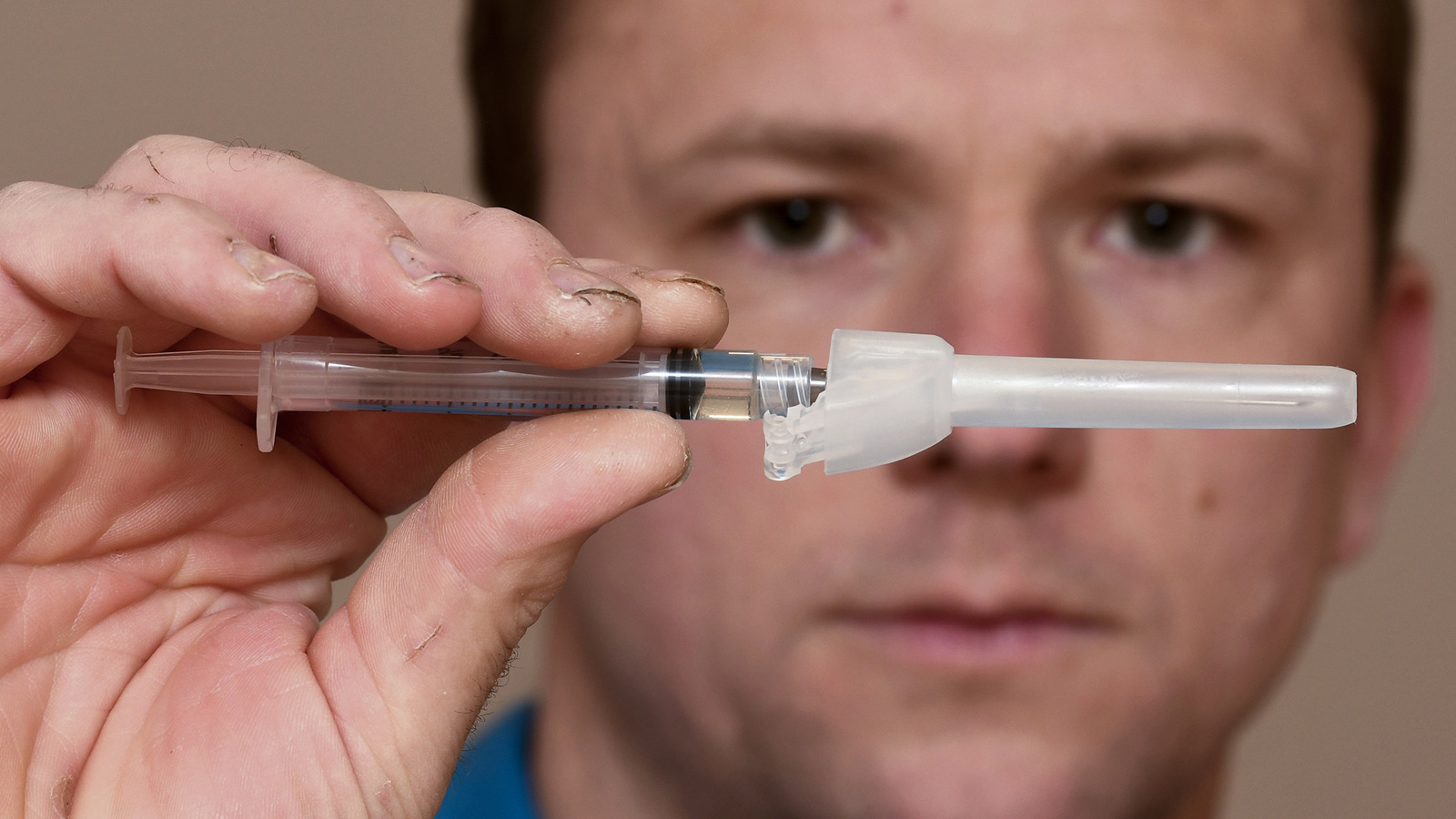 Craig Koller in Kewaskum on April 23, 2021 shows a needle for the weekly hormone shots he has to give himself for the rest of his life. Koller had testicular cancer, which he believes was caused by years of exposure to PFAS. (Credit: Mark Hertzberg / The Midwest Center for Investigative Reporting)

At the end of February, JCI submitted a 2,400-page proposal to build a groundwater extraction and treatment system to remove groundwater contamination from affected wells in the area while also removing tainted soil along its outdoor testing facility.

"Since identifying a municipal water line as the safest and most permanent solution, (JCI) has done everything we can to move the proposal forward," the company said in a statement.

JCI's statement said it has submitted plans to the state, started construction design, solicited public input, committed to funding technical expertise for Peshtigo and Marinette and plans to alleviate any economic burden on the parties involved to provide affected residents with a permanent and sustainable drinking water solution as quickly as possible.

A lawsuit involving about a thousand Peshtigo residents aims to provide some restitution to the area's residents. The suit asserts class action property damage and health claims alongside individual disease claims totaling $17.5 million.

But not everyone affected is eligible for payouts.

To qualify, residents must have lived in a roughly three-square mile area in Peshtigo and lived in or owned a residence with a private well between Jan. 1, 1965, and Dec. 31, 2020.

Despite known contamination in Marinette ditches and wells, Koller, who now lives in Milwaukee, does not qualify. His father's current Peshtigo home is roughly a hundred yards from eligibility.

"They somehow managed to cut me out of that," Koller said.

Marinette is home to one of the oldest fire suppressor production companies, Ansul Co. It was founded in 1915 when the company produced cattle feed and specialty chemicals initially, and then began making fire suppressors in 1934.

Ansul became a leader in the fire suppressor industry and their sprinkler systems can be found in ceilings across the world. The company merged with the publicly traded international conglomerate Johnson Control Industries in 2016.

The Ansul name and brand now exists as an arm of Tyco Fire Protection. A statement from the company said it employs about 800 employees in the Marinette region, making it one of the area's largest employers. According to the Environmental Protection Agency, foam from firefighting training courses — the kind of foam made at JCI’s Marinette facility — held at airports and military bases across the country is a major contributor to groundwater contamination. The United States military has been one of JCI's largest customers for decades.

JCI delayed for years its response to the PFAS contamination, according to the Milwaukee Journal Sentinel. In 2013, the company found elevated levels of the chemicals surrounding its facility and then only acknowledged their spread beyond the Marinette facility in 2017.

How long the company waited to inform the public surprised Koller, but the confirmed contamination did not.

After his cancer diagnosis the summer after high school, Koller's life involved rounds of chemo and the removal of his left testicle. The cancer was always in the back of his mind.

During his last year of undergrad, which he spent abroad, he found another lump eight months into the program. He returned to the states to have 20% of his remaining testicle removed at Froedtert and the Medical College of Wisconsin.

Koller's bouts with cancer weren't over as he had to have his remaining testicle removed while pursuing a master's degree.

Being outside of the class-action settlement takes a toll on Koller, who is now cancer-free. He said he has had tens of thousands of dollars in medical bills, has to inject testosterone weekly, and had to pay for in vitro fertilization, necessary because of his banked sperm, when his wife and he decided to grow their family. He said it's hard to determine fair compensation.

"Who's gonna tell me how much my (testicles) were worth," he said. 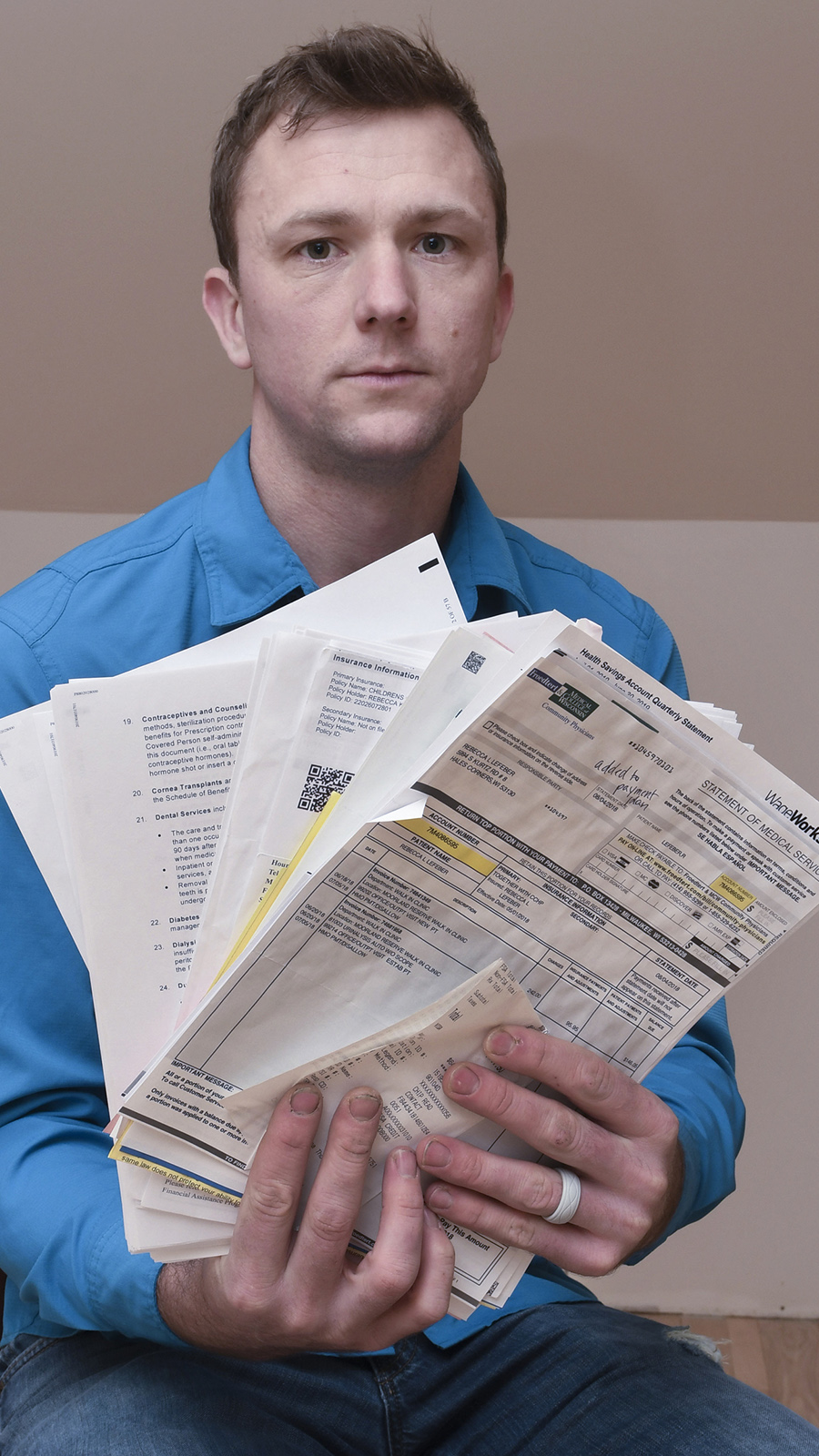 Craig Koller in Kewaskum, Wis., on April 23, 2021 shows the 2019 bills for in vitro fertilization that allowed him and his wife Becky to conceive their daughter Elsie, now 14 months old. (Credit: Mark Hertzberg for The Midwest Center / Investigative Reporting)

Lawsuit aside, Koller said he doesn't know if reconciliation will actually occur as the class-action suit is not an admission of fault on JCI's behalf.

"It's just illogical because we know where it came from," he said, "but they'll never admit it."

Despite his two separate strains of testicular cancer, multiple orchiectomies and weekly hormone therapy, Koller said he considers himself a lucky guy.

"I'm just lucky to still be here," he said. "I have a daughter and a wife. I could just as easily be six feet under taking a long dirt nap."

Since 2017, Jeff and Cheryl Lamont have used bottled water to cook, drink and clean. After its announcement about the contamination, JCI continues to provide bottled water and filtration systems to residents with elevated PFAS levels.

But the Lamonts, like many other residents, want a permanent solution to the contaminated wells, so they formed Save Our H2O to advocate for safe drinking water.

Lamont said, in his estimation, the federal response to PFAS contamination has lagged for years, which has caused smaller municipalities and communities to take matters into their own hands.

"The states got sick of waiting, so a lot of states implemented their own standards because there was no guarantee of when a federal standard would come in place," he said.

Wisconsin is one of about 30 states that does not regulate PFAS contamination in drinking water, according to a 2019 tabulation from the law firm Bryan Cave Leighton Pasner, so the group helped draft the Chemical Level Enforcement and Remediation (CLEAR) Act introduced in the state legislature in 2019.

It would have required the state to establish standards for PFAS levels in drinking water and soil as well as require a person who possesses PFAS to provide proof of financial responsibility for remediation.

The bill stalled in early 2020 but was reintroduced by Gov. Tony Evers and other legislators in late April, citing PFAS contamination in 50 Wisconsin communities, according to WKBT in La Crosse, Wisconsin. 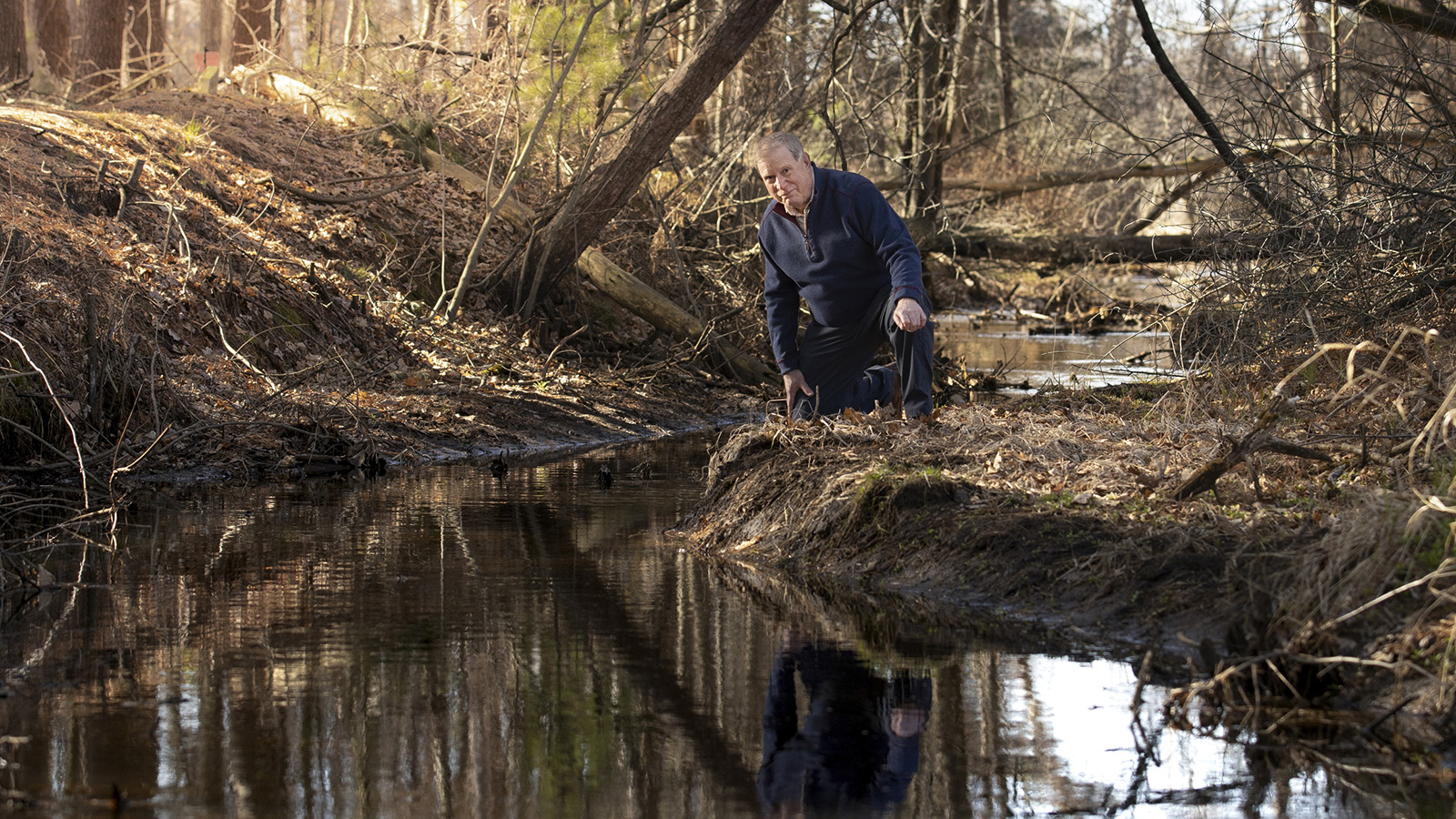 Jeff Lamont, a Marinette resident and retired hydrologist, kneels next to a creek where it empties into Lake Michigan's Green Bay. This creek is the most highly PFAS-contaminated of all the tributaries that empty into the lake based on a study funded by the Sea Grant Institute. Sampling occurred at all significant tributaries from the eastern shores of Green Bay at the north end of Door County to Escanaba, Mich. (Credit: Mike Erhart / The Midwest Center for Investigative Reporting)

The Wisconsin Department of Natural Resources is currently developing PFAS standards and the state's Department of Health Services released recommendations for groundwater of 20 parts per trillion for PFAS chemicals. Currently the EPA has no legal limit for PFAS in drinking water, according to Consumer Reports.

A retired hydrologist who spent more than 30 years in the environmental cleanup industry, Lamont was shocked to come home to face contamination in his backyard.

"I never really thought it would happen to me," he said.

Another resident surprised by the 2017 contamination announcement was Furton, the Peshtigo supervisor. Several years ago, she moved her family into the home her parents purchased in the mid-1980s.

Like many residents in the area, her parents' love of natural beauty, land and desire for outdoor recreation guided their decision to live in Peshtigo. Those are the same reasons Furton and her family came back home.

Furton said her father, a former soil scientist, studied the groundwater when they purchased their home and continued this practice for years. Unfortunately, the family, like many in the region, did not know to test for PFAS contamination until JCI disclosed the contamination in 2017.

"Now, sadly, he's heartsick about it," she said, "which is just wrong because he did nothing wrong." 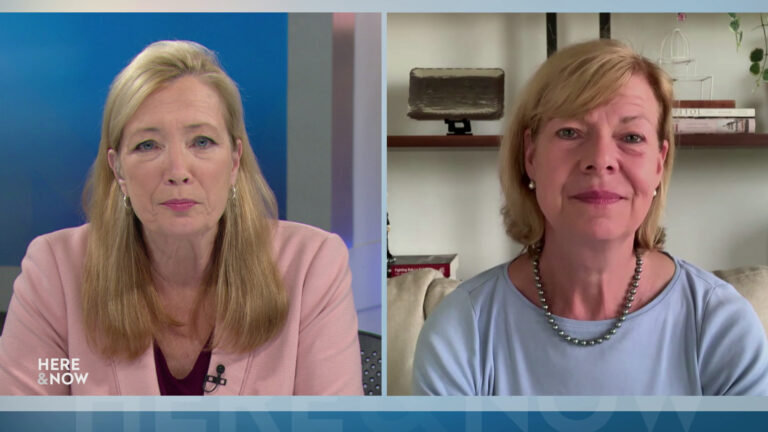