How Much Higher Are COVID-19 Rates Among Unvaccinated Wisconsinites?

Examining new cases and vaccination levels in all 72 counties around the state reveals how the coronavirus continues to circulate and infect residents who haven't gotten a shot. 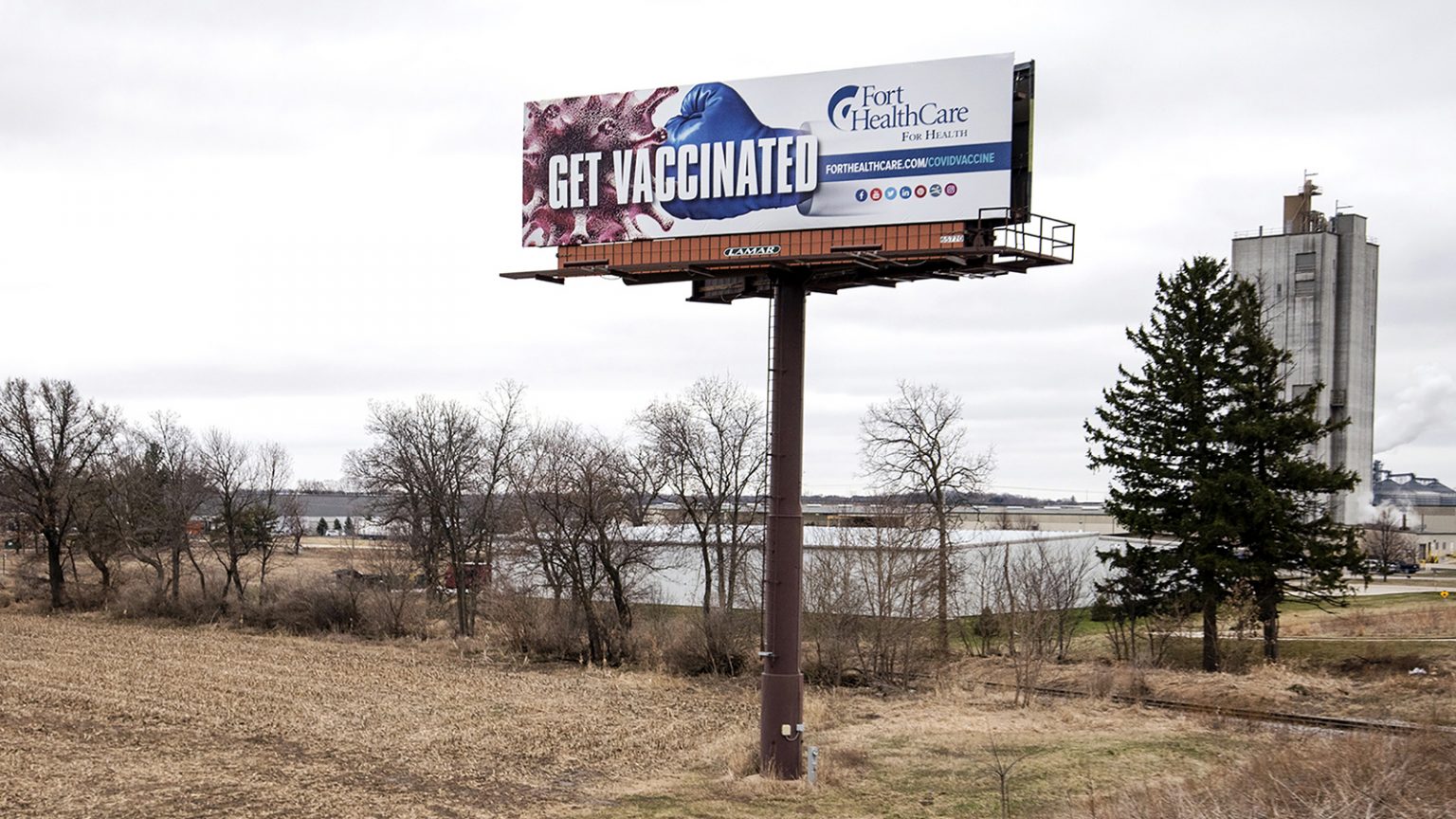 A billboard on the side of Highway 26 in Rock County encourages people to get the COVID-19 vaccine. (Credit: Angela Major / Wisconsin Public Radio)

Americans are entering a second pandemic summer with considerably more optimism than in 2020 as many millions of people receive the protection of a coronavirus vaccine.

Memorial Day weekend travel is expected to be busy in the United States, with 60% more Americans planning to fly over the holiday in 2021 than a year prior. A similar rise in highway traffic is expected, with more than 37 million people planning to drive more than 50 miles over the weekend. Some large public gatherings are resuming as well. The Indianapolis 500 scheduled for May 30 is sold out with more than 135,000 spectators expected to descend on the race.

At the same time, public health officials continue to urge caution for the shrinking, yet still vast number of people who remain unvaccinated.

"If you are not vaccinated, our guidance has not changed for you. You remain at risk of infection," said Rochelle Wolensky, director of the Centers for Disease Control and Prevention, during a May 27 meeting of the White House COVID-19 response team where she urged unvaccinated individuals to wear masks and take other precautions during the holiday weekend.

Where Is Wisconsin's COVID-19 Vaccine Delivery Lagging — And Why?

Public health officials in Wisconsin echoed this note of caution.

"Among people who are not vaccinated, the most important things to do are to avoid gatherings and to wear masks when you're in public," said Dr. Ryan Westergaard, state epidemiologist for communicable diseases, when asked about the risk of COVID-19 spreading among unvaccinated people over the holiday weekend during a May 27 press briefing.

A May 21 analysis by the Washington Post showed how declining case rates among the total population in the U.S. obscure the rate of COVID-19 spread among people who still haven't received a vaccine. That group includes all children younger than 12 — who remain ineligible — and a varying share of adolescents and adults that differs state by state, county by county.

While breakthrough cases — when a vaccinated individual is nonetheless infected with the coronavirus — do occur, they have been observed to be rare, with the vast majority of new infections now occurring among unvaccinated people. As of April 30, the CDC had identified a total of 10,262 breakthrough infections out of more than 100 million people who had been vaccinated by that point.

In Wisconsin, vaccination rates continue to vary widely among its 72 counties, a pattern that has persisted over the course of the year so far. In Dane County, fully two-thirds of residents had received at least one dose as of May 28. Rates in Door and Bayfield counties also exceeded 60%, with a dozen additional counties at or above 50%.

More than half of residents remain unvaccinated in most Wisconsin counties, however, with only about one in four residents receiving a first dose in Clark and Taylor counties, which have lagged behind the rest of the state for months.

Even as millions of Wisconsinites gain protection through vaccination, COVID-19 continues to circulate and infect those who haven't taken that action.

Comparing case rates among counties' unvaccinated populations can provide a sense of the level of ongoing risk unvaccinated people may face in a local area. Adjusting each county's 7-day average for new confirmed COVID-19 cases to a per capita rate that only encompasses its unvaccinated population can help illustrate this dynamic. This calculation is accomplished by subtracting the number of residents in each county reported as receiving at least one dose of vaccine from its estimated 2019 population. Then, 15% of vaccinated individuals were added back, reflecting a cautious estimate of breakthrough infections.

In many parts of Wisconsin, the confirmed COVID-19 case rate per 100,000 as of May 27, 2021 is roughly twice as high when adjusted to reflect only the unvaccinated population. That difference fits expectations given that many counties are hovering around a 50% vaccination rate.

In counties with smaller portions of vaccinated residents, case rates adjusted for their unvaccinated population don't jump quite as much, though they do still increase.

Notably, even Rusk County's highest-in-the-state case rates in late May 2021 do not approach peak 7-day average rates seen across Wisconsin in the fall of 2020. Comparisons to May 2020 present a more complex picture, though, as parts of rural northern and western Wisconsin hadn't yet seen a single case while more densely populated counties were already experiencing local outbreaks.

Going forward, geographic patterns in case rates are poised to persist as vaccination rates continue to slow down even as many parts of Wisconsin remain far from vaccination goals. The ongoing risk of COVID-19 infection depends not only on disease activity in local areas, but also on how many people have been vaccinated and the actions of those who remain unvaccinated.

"Just being in your neighborhood isn't a risk factor for getting COVID," said Ajay Sethi, a public health and infectious disease epidemiology researcher at University of Wisconsin-Madison. "And it doesn't necessarily correlate with the county or even the zip code. It ultimately comes down to attending some kind of gathering."