How Does Hesitancy Fit Into Wisconsin's COVID-19 Vaccination Trends?
Skip to content

How Does Hesitancy Fit Into Wisconsin's COVID-19 Vaccination Trends?

Here & Now Extra: Differences by age, race, gender and politics in terms of who is getting coronavirus vaccines around the state align with national trends and polling, while pointing toward potential gaps going forward. 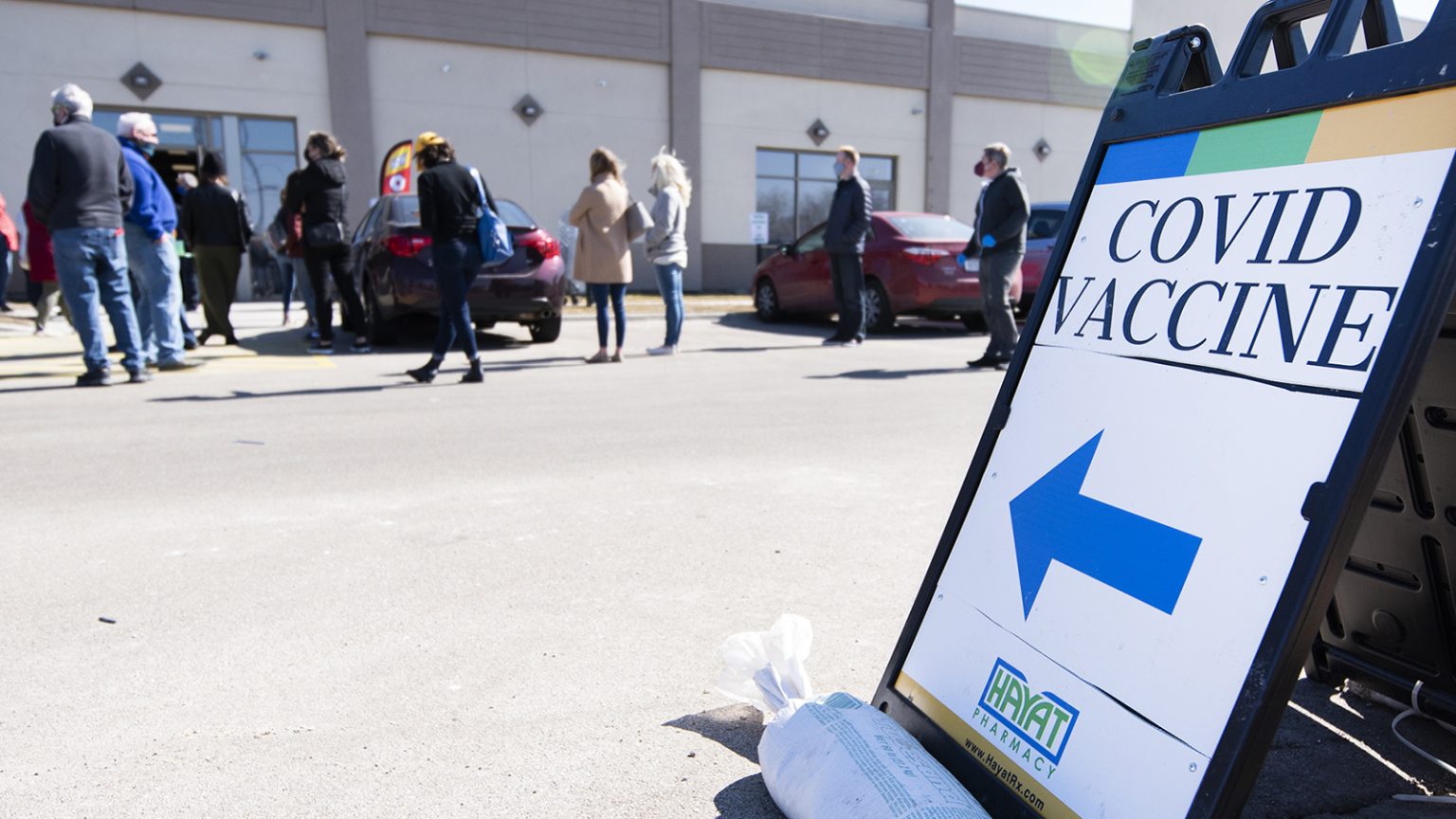 Four months into the coronavirus vaccination campaign, Wisconsin is racking up increasingly broad levels of coverage, at least among certain groups of people and in some places. More than 4 million individual doses have been delivered around the state as of late April, with over two-fifths of the state's population receiving at least one shot and well over one-quarter completing their full vaccine series.

A trio of coronavirus vaccines are available for use. Two options — manufactured by Pfizer and Moderna — require two doses delivered multiple weeks apart. Each has been distributed since initial federal approval, and millions of shots have been given in Wisconsin so far. The third is a single-dose vaccine manufactured by Johnson & Johnson. This option was initially approved at the end of February 2021, but its distribution was paused in mid-April due to concerns over a very rare side effect. Following a meeting on April 23, a Centers for Disease Control and Prevention panel recommended this vaccine for use once again.

Even as vaccine availability has generally expanded, there are some wide gaps among different groups of Wisconsnites who have been vaccinated.

One persistent difference is a gender gap that emerged soon after the first vaccinations were administered in December 2020. While about one in three Wisconsin women have been fully vaccinated over the ensuing months, the rate among Wisconsin men is about one in four as of late April. State public health officials have attributed this imbalance to the early eligibility of healthcare workers in medical and caregiving fields, where employees are disproportionately women, but this gap has remained even as access has expanded to all adults.

Vaccination disparities by race and ethnicity remain a problem in Wisconsin, even as health advocates and community groups work to expand access to shots. As of late April, well over one-quarter of the state's white residents have completed the vaccine series, compared to nearly one-fifth of the state's American Indian and Asian American residents, and less than one-eighth of its Black residents. At the same time, about twice as many non-Hispanic residents of the state have been fully vaccinated compared to Hispanic residents.

However, the widest gaps are by age group, a pattern that is intentional on the part of public health authorities and reflects the earlier prioritization of older adults given their greater risks of serious outcomes and death from COVID-19. While nearly three-quarters of Wisconsinites who are 65 and older have been fully vaccinated as of April 22, that level drops to a little over one-third of those ages 55 to 64, a little over one-quarter of ages 35 to 44 and 45 to 54, fewer than one-quarter of those ages 25-34 and less than one-sixth of those ages 18-24.

These age differences in coronavirus vaccinations are not unexpected, but they do alter the landscape of the pandemic. The broader transmission of coronavirus variants are helping drive major spring case surges in neighboring Michigan and Minnesota. Wisconsin has had a similar though much smaller upswing in COVID-19 cases and hospitalizations over the course of April, but given the ages of those who are vaccinated and other factors like a return to in-person schooling, it's younger adults and children who have more exposure to potential infection, which has become a growing concern among pediatricians.

Dr. Jim Conway is a professor of pediatrics at the University of Wisconsin School of Medicine and Public Health who researches infectious diseases among children, including outcomes of immunization programs and issues of vaccine hesitancy. In an April 16 interview on Here & Now, Conway emphasized the urgency of expanding coronavirus vaccinations among young people, including children once regulatory approvals are issued.

"What we started to realize is that as we've opened things up and kids are more engaged with others, that they certainly can be infected," said Conway. "While they still don't seem to do poorly with the infection, they can transmit to others and can cause small outbreaks and transmission within their peer groups, but also back into their families and communities. If we want to get rid of this, we need herd immunity across all age groups and not have a reservoir of vulnerables circulating the disease."

Conway went on to describe timelines of coronavirus vaccine trials for different age groups of kids, projecting that approval and rollout would be forthcoming for all but the youngest children by the end of 2021.

Millions of adult Wisconsinites have yet to get vaccinated, and it remains unclear how many ultimately will choose to do so given vaccine hesitancy. However, what's the potential among different groups of people to refuse vaccination, and what do current vaccination patterns in Wisconsin reveal about those trends?

The Kaiser Family Foundation, a California-based nonprofit that focuses on health issues in the United States, conducts ongoing polling at the national level to gauge attitudes toward vaccination among several basic demographic characteristics, including age, gender, and race and ethnicity, as well as by other factors like education, partisan status and geography. Its COVID-19 Vaccine Monitor details different stances toward getting vaccinated among these groups, as well as how these perspectives have changed since December 2020 when the polling launched.

Conducted at a national level, the monitoring project highlights trends that emerged over the first several months of coronavirus vaccination. In a March 30 report based on polling conducted in mid-March, the project found interest in getting the vaccine is increasing across racial and ethnic groups, with levels of hesitancy dropping among Black and Hispanic adults, particularly the latter.

Lagging vaccination rates among Black and Hispanic Wisconsinites may reflect effects of previously higher hesitancy among these groups, but other factors are meaningful. Milwaukee County Office of Emergency Management medical director Dr. Ben Weston noted barriers to setting up a vaccine appointment include the time and costs related to work, child care and transportation needs among more vulnerable groups. These issues have prompted local health officials in Milwaukee to expand vaccination access via mobile clinics, welcome an increase in walk-in opportunities and anticipate the reapproval of the Johnson & Johnson vaccine, which requires only a single dose and therefore no need for a follow-up visit.

While the COVID-19 Vaccine Monitor has found vaccine hesitancy rates declining by race and ethnicity, disinterest in getting vaccinated has expanded along partisan lines. As of March, more than one-third of Republican respondents indicated that they would "definitely not" get vaccinated or would do so "only if required," levels close to what this polling found in December. Among independent respondents, though, this gauge of vaccine hesitancy dropped from just under one-third in December to one-fifth by March. Among Democrats, this total had dropped from one in ten respondents to less than one in twelve.

Even as vaccine hesitancy among some Republicans remains persistent, this opposition along political lines encompasses a complex mix of factors. For starters, there is a gender gap among Republicans, with more men than women indicating via polling they don't want to get vaccinated. (In response to these findings, Senate Minority Leader Mitch McConnell, a Republican from Kentucky, has urged Republican men to get vaccinated.) Meanwhile, county-level analysis of vaccination rates around the U.S. has found distinct differences along the lines of 2020 presidential votes, with lower levels — and higher hesitancy — among those voting for former President Donald Trump.

These partisan differences have found expression in Wisconsin through statements made by Sen. Ron Johnson, a Republican, who questions efforts to expand coronavirus vaccinations. In an April 22 interview with a conservative talk radio host, Johnson indicated he is "suspicious" of the national vaccination campaign, stating distribution should be more limited, particularly among younger people. 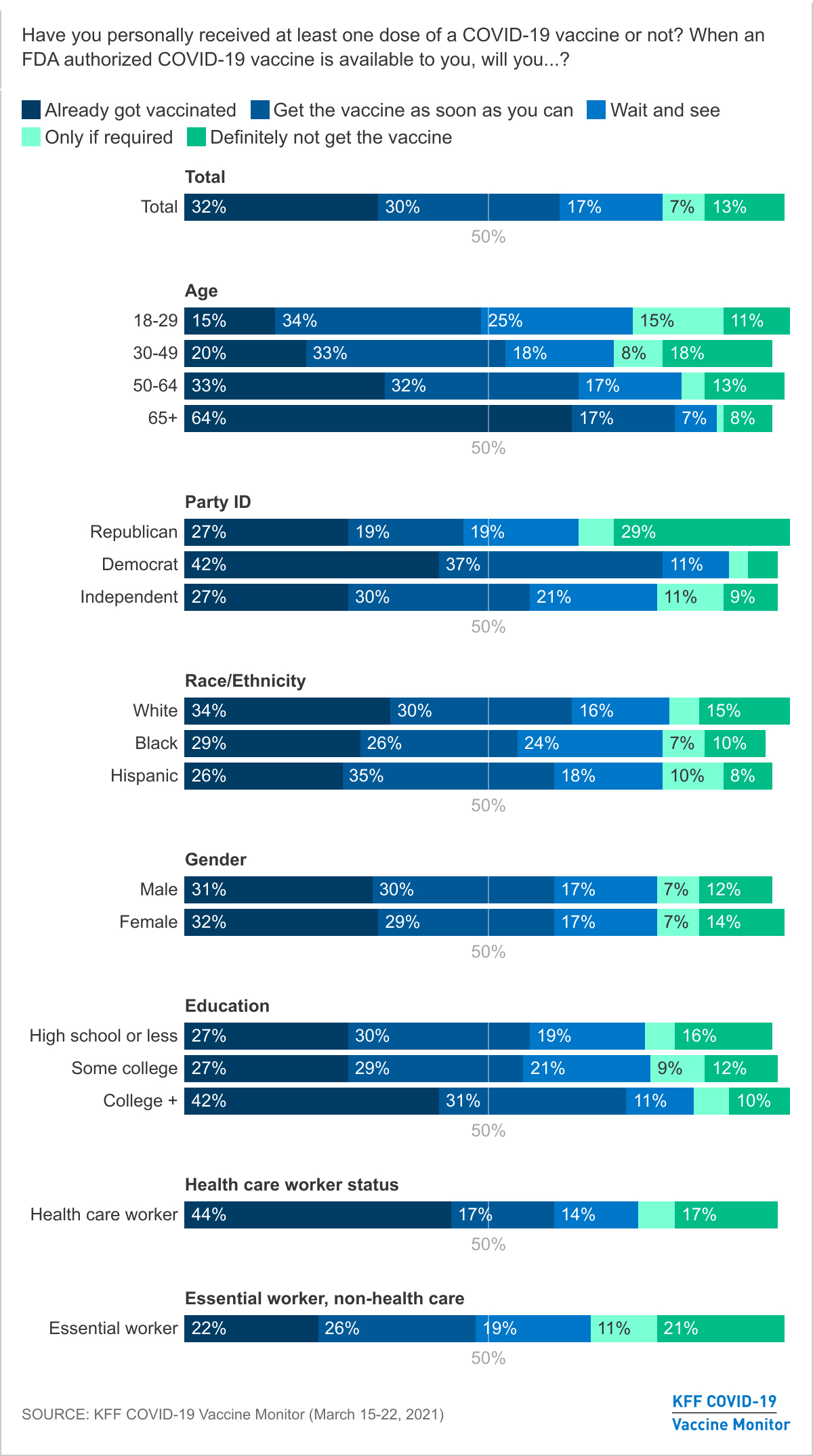 When it comes to age differences, the Kaiser Family Foundation project mirrors the age differences reported in vaccination rates in Wisconsin. More than four out of five senior citizens polled at the national level report already having been vaccinated or plan to do so as soon as possible. That level drops to just under two in three adults ages 50 to 64, and just over one in two among adults ages 30 to 49. Among young adults ages 18-29, the figure drops to less than half. However, only about one in four adults under the age of 50 indicate they will refuse getting vaccinated or will only do so if required.

The youngest age group for which any coronavirus vaccination has been approved are 16 and 17-year-olds, who have been able to get the Pfizer vaccine since April. The Wisconsin Department of Health Services is reporting rapid progress in distribution among these recipients, with more than one in five getting their first dose as of April 22.

Meanwhile, Wisconsin health officials continue to remain concerned about the spread of variants and related surge in cases in neighboring states.

"Michigan seems to be about a month ahead of us in terms of the timeline at which the more transmissible genetic variants have become the predominant strain," said Dr. Ryan Westergaard, a state epidemiologist for infectious disease, in an April 22 briefing about the pandemic and vaccination campaign.

"That's one which gives me concern — that we're not out of the woods to see a late spring, early summer surge," Westergaard added. "As more data have come in, these novel genetic variants are declaring themselves to actually be more transmissible, they do spread more quickly and more easily in a community."

"We really do need to be aggressive about trying to get more of the population immunized as quickly as possible," said Conway. "We've been very successful in the older individuals in Wisconsin. We're one of the most successful states in that group — we've really protected the most vulnerable. But now we need compliance and buy-in from people that are unfortunately going to be the ones that keep transmitting." 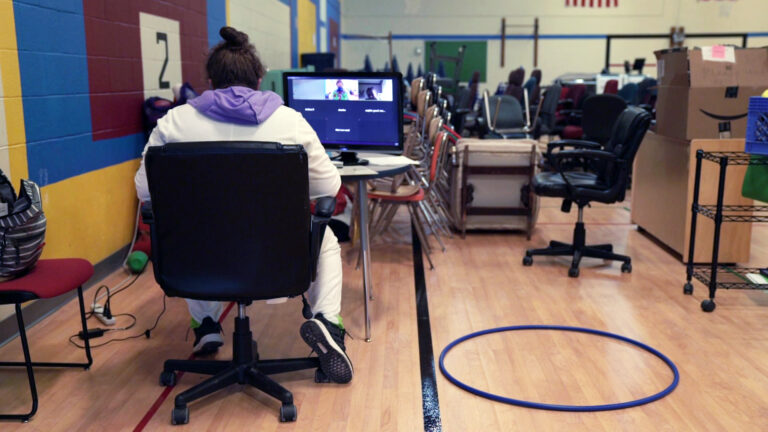 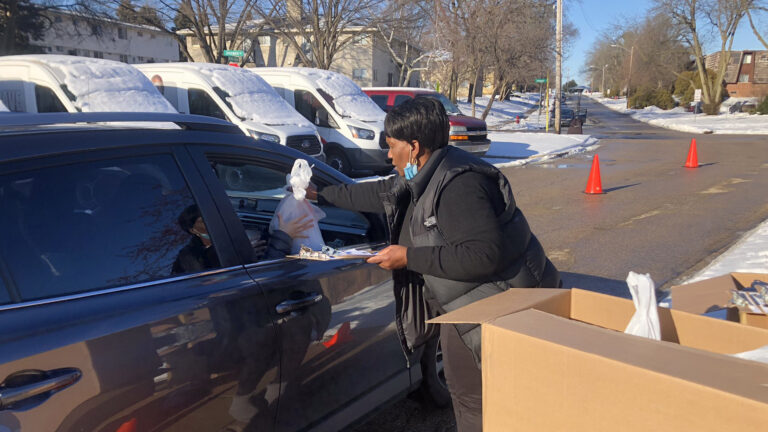