Under an executive order, the in-person election would be delayed until June 9. Republican leaders say they will challenge the order in the state Supreme Court, while elections officials say to continue preparing for Tuesday's election while they wait for litigation. 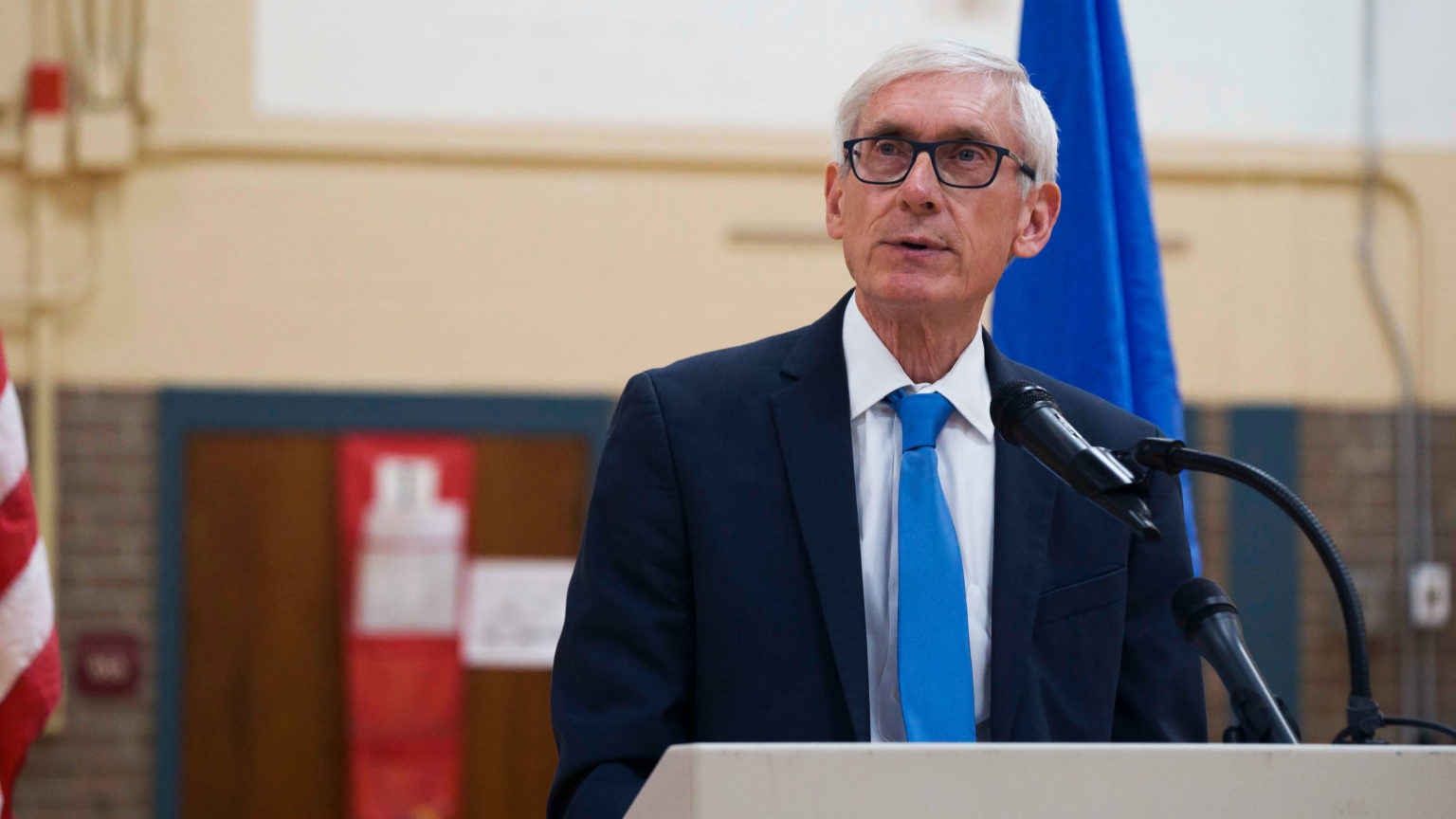 “Frankly, there’s no good answer to this problem—I wish it were easy,” Evers said in a statement. “But as municipalities are consolidating polling locations, and absent legislative or court action, I cannot in good conscience stand by and do nothing. The bottom line is that I have an obligation to keep people safe, and that’s why I signed this executive order today.”

Under the order, the new election date is scheduled for June 9, unless the Legislature and governor agree on a different date. Evers also ordered the Legislature to convene for another special session on Tuesday, April 7 at 2 p.m. to set a new date for the spring election.

“We are immediately challenging this executive order in the Wisconsin State Supreme Court. The clerks of this state should stand ready to proceed with the election. The governor’s executive order is clearly an unconstitutional overreach,” they said.

Administrator of the Wisconsin Elections Commission Meagan Wolfe sent out advice to local clerks to keep going as if the election would be held.

“While the Governor has called for moving the election, we can be certain there will be very fast moving litigation,” she said. “Therefore, we must continue to mak[e] preparation[s] in earnest for tomorrow.  If the election is moved to the 9th we will adjust accordingly, but all we can do today is prepare for tomorrow.”

Republican leadership in the Legislature ignored Evers’s last order for a special session by gaveling in and out of session remotely on Saturday, and again on Monday. Republicans have insisted the April 7 election go forward as planned, even as other states around the country have delayed their elections or switched to absentee-only balloting during the COVID-19 health emergency.

Municipal clerks and mayors from around the state have pressured the governor and Legislature to delay the election due to concerns about staffing the polls and the health and safety of voters and poll workers.

Evers’s executive order cited other states as examples for why Tuesday’s election should be moved, including that Michigan held a statewide election on March 10, while the neighboring state of Ohio moved their election (also through Executive Order by their Republican Governor). Health experts say in-person voting in Michigan may be the reason that state has a higher rate of COVID-19 than Ohio.

Evers said he believes the Wisconsin Supreme Court will support his executive order suspending the spring election. During an afternoon news conference, Evers said “I believe the Supreme Court will be helpful but at the end of the day it’s about safety. This spans liberal and conservative biases. If we fail we will have failed many people in Wisconsin.”

On April 1, Evers said he did not have the authority to suspend the election. His chief legal counsel Ryan Nilsestuen said Monday however, the “facts on the ground have changed from a week ago.”

Nilsestuen says the governor has the power under state law and the state constitution to issue orders deemed necessary for the security of persons and property.

“The Governor does not have constitutional or statutory authority to modify, suspend or otherwise alter the statutes. Nor does the Governor have the constitutional or statutory authority to set the time, place and manner of elections. That authority belongs to the Legislature…Given that the Governor’s order comes mere hours before the in-person election is set to begin, the Legislature will suffer irreparable harm if Executive Order 74 is not immediately enjoined.

“Moreover, such sweeping changes to an election made just before the election is set to begin will undoubtedly cause voter confusion and call into question the integrity of the electoral process.”

Evers said there are no plans to appeal any ruling from the Wisconsin Supreme Court or to have Department of Health Services Secretary-designee Andrea Palm issue a similar order under the banner of the COVID-19 health emergency.

“This is it,” Evers said. “We’re counting on the Supreme Court to support us. We’re making our best case possible…This is it.”

Evers said he picked the date of June 9 based on advice from health experts. Wisconsin’s 7th Congressional District, covering 26 counties across northern Wisconsin, has a special election scheduled for May 12. Evers said that election could be suspended as well, but said there is time to figure that out.

Just two hours before Evers issued the executive order, WEC administrator Wolfe held a video conference describing preparations to hold the election. Wolfe said clerks were ready, even though a number of polling places have either drastically reduced or changed around the state.

Wolfe said 2,500 members of the Wisconsin National Guard took the training yesterday to certify them as poll workers and would be deploying on election day in plainclothes to help fill the need in their local communities.

She said the commission sent directions to poll workers on how to check photo IDs and have voters sign poll books, all while maintaining social distancing through an elaborate six-foot dance.

Wisconsin’s spring election has been litigated in multiple courts in the last two weeks. Federal Judge William Conley extended the timeline for requesting and receiving absentee ballots last week, but said he did not have the authority to suspend the election. Conley offered heavy criticism to both the governor and Legislature for not changing the law to move the election.

The state GOP appealed that ruling to the U.S. Supreme Court, which could respond at any time. The GOP also asked the Wisconsin Supreme Court to issue an order telling clerks in Dane and Milwaukee County to limit the advice they were giving voters on whether Covid-19 allowed them to ignore absentee voting provisions like photo ID.

Prior to the federal court ruling, Evers proposed moving the election to absentee by mail while maintaining the April 7 date. Evers sent out a statement after that ruling, saying, “If I could have changed the election on my own I would have but I can’t without violating state law.”

It’s not clear what changed between April 1 and April 6 that convinced the governor he had the authority to suspend the election, but his executive order cites a timeline of events related to the health emergency, including a statement from Vice Admiral Jerome Adams, the United States Surgeon General, that the impact COVID-19 will have on the United States this week is “our Pearl Harbor moment, our 9 / 11 moment, and it's not going to be localized, it's going to be happening all over the country and ‘I want America to understand that.’”

Conley said he would entertain lawsuits challenging the validity of the results if it appears certain voters were not able to fairly cast their ballots.

This story is developing, and will be updated throughout the day. 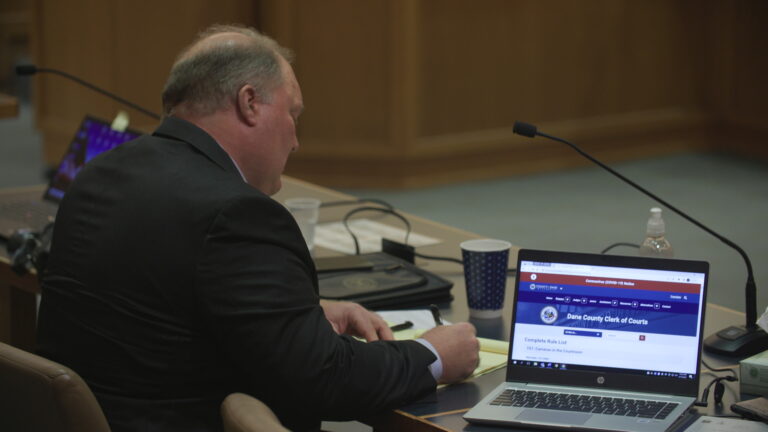