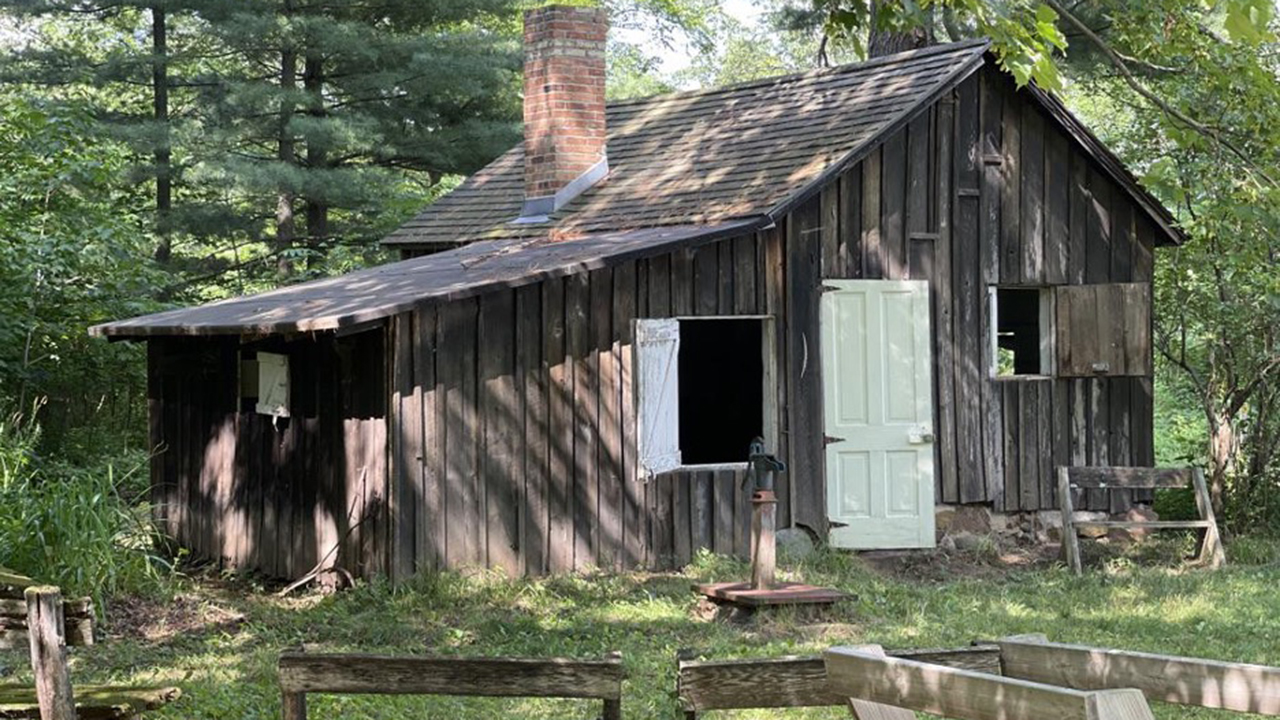 Wisconsin Foodie airs 7 p.m. Thursdays on PBS Wisconsin and is available to watch on-demand on the free PBS Video App.

“Our ability to perceive quality in nature begins, as in art, with the pretty. It expands through successive stages of the beautiful to values as yet uncaptured by language.”

It’s not often that you will find me speechless.

I will, on occasion, find myself emotionally overwhelmed to the point of being physically unable to form words and sentences that describe what I’m experiencing in detail. My ability to use words to describe the animated world around me is one of my superpowers; I have the ability to perform emotional alchemy, transforming sentiment into language, and using language to inspire change.

All that being said, paddling my canoe in the Wisconsin River, pulling up on her sandy shores and hiking my boat to the summer home of Aldo Leopold with ingredients in tow to recreate a Leopold family recipe hit me like a ton of bricks.

I find it hard to say what was more overwhelming for me — the beauty of the place, its sleepy quiet, the buzz of the insects in the fields of prairie and wildflowers, or the fact that one of my conservation heroes sat in this very place and created the concept of Round River. 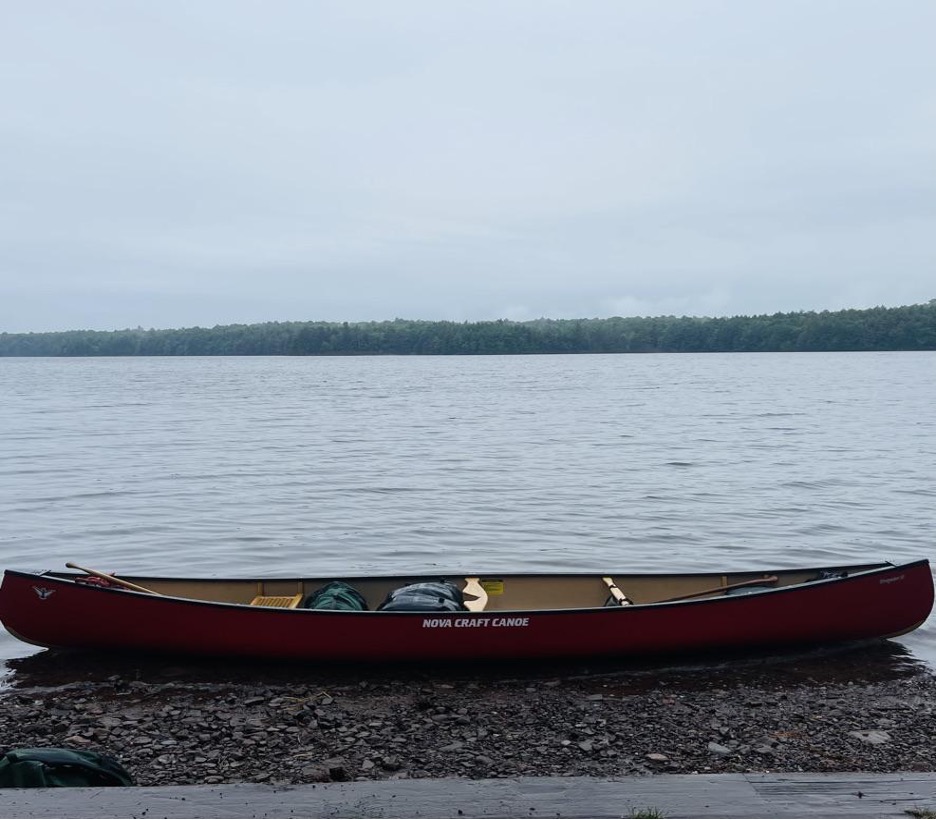 In Leopold-speak, the Round River “was a fabled Wisconsin river, described in folktales, which was said to flow in a circle. Leopold explains that this was a parable, and the state of Wisconsin is itself a round river, a loop of energy, a circle of life” (from LitCharts).

When I first started to learn about Leopold as a youth in Wisconsin, I read his work, “A Sand County Almanac” in the same breath as Rachel Carson’s “Silent Spring.” What I remembered about my first pass through the material was that it was full of swirling, deep eddies of emotional metaphor. There were many pieces I knew I was glossing over to grab main elements in order to achieve my goal of a decent score on a book report or exam. Ironically, Leopold famously later writes about the misery of educational specialization and its effects on overall learning.

It was the following spring, though, that I remember noticing the return of the Red-winged Blackbird to the Kickapoo Valley that woke up something that had been sleeping in me since reading Leopold’s work.

Instinctively, I knew that the Red-wing marked the real beginning of spring (no offense, robins of Wisconsin), followed by sandhill cranes then turkey vultures and Leopold’s beloved Canadian geese.

What is that situational awareness that lives in all of us that allows our most primitive senses to be heightened by the mere whistle of a bird? What is the life force that surges through us when the spring winds blow through us and our very being is lifted from the grays of winter?

I’ve read and reread Leopold’s work many times as an adult, and I can only surmise that in my cells, there are ancient memories of such things that connect me to the entire world. If I dwell in that moment, it’s easy to say that we are truly all connected. All of the earth is animated and alive in their own beautiful and magnificent way. Sometimes, when I’m at my loneliest, I remember Leopold’s words and look for solace and purpose in the waters, rocks, trees, flowers, insects, animals and breezes of this place. I’m never disappointed.

Being at the Leopold Shack meant something to me. It was a homecoming of sorts, a return to some of my deepest knowledge that I am indeed connected to this place and responsible to protect her through my life’s work. Catching my breath, it was through tears that I explained the deeper meaning of this place to the Wisconsin Foodie crew. This is the place that I credit the birth of my own awareness, the place where Leopold found the words to relate to a kid like me who had lived his life unaware of the connection that existed all around me. For that, I’m forever grateful.

This trip also marked another highlight for the Wisconsin Foodie cast and crew. An all of the years of taping wilderness/hunting segments, previous hosts and guests were unable to actually harvest or catch their intended target. It’s been a long running joke in Foodie production meetings that fishing or hunting usually spells television disaster for us because, well, it’s hard. Or maybe it’s hard on camera.

I confidently met Ryder Will, Mirror Lake State Park superintendent, for a day of fishing on Mirror Lake’s waters. Predictably, the fishing was slow. Ryder and I “bee-bopped” around the lake in my beautiful red canoe and tried fishing for panfish, with little luck.

I sat entranced with the natural beauty all around me in Mirror Lake and listened, as Ryder’s love for the place was evident in his words. He eloquently described his ethic of conservation and ensuring that places like Mirror Lake are enjoyed but with long term sustainability at heart. Fishing with him was a pleasure, and I doubt anyone could have worse luck than us. 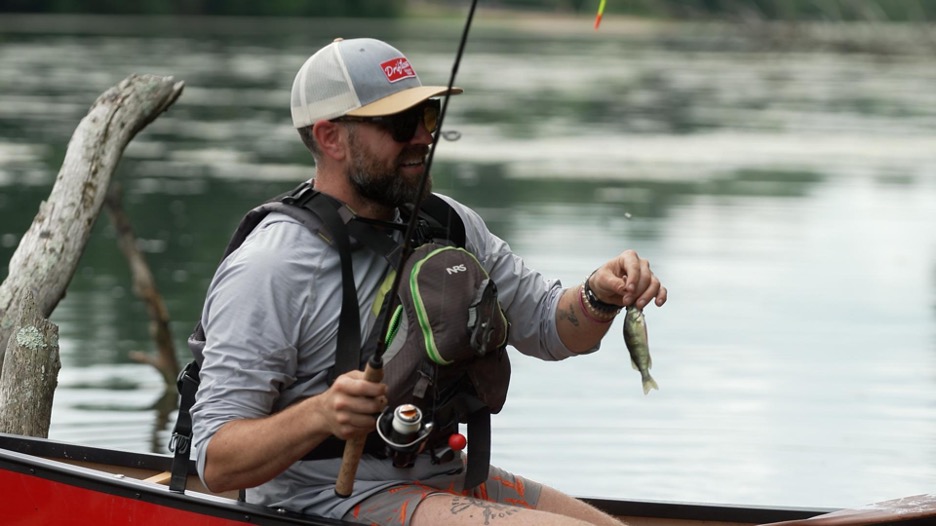 With the lingering taste of defeat on my tongue, I needed one more chance for redemption in waters that moved like so much in my soul on this shoot. I returned to the waters around the Leopold Shack and paddled into the swirling braids of our beloved Wisconsin River.

Somehow, my senses sharpened and focused on the moving waters, the feel of my canoe paddle pushing me forward, the hydraulics ever-shifting under me into a place of relative calm. I slowed my mind. I relaxed my breathing. I casted into an eddy behind a tree and let my lure dance her way through the tea-stained waters when, suddenly, my line went taught.

I set the hook.

The fishing pole exploded in my hands. The line sang out of the reel. I could feel the electricity of the fish and its intention to resist this pressure pulling it to the surface, to lash out violently at the hook, the line, the red boat – all of it in a matter of microseconds. I screamed for the cameras “I’ve got one! Over here!” and they immediately ceased filming the butterflies and river currents and made their way over to the riverbank closest to me.

I began to worry, thinking that my line may snap, I might flip my boat, I may not be worthy of landing this fish and the camera would catch my emotional collapse in brilliant 4k. Ultimately, the fish and I found an unlikely rhythm together, and as she tired from the repeated runs and dives, she calmed herself to allow me to remove the hook in her lip.

Gracefully, I placed her back into the swirling waters of the Round River, thanked her for reminding me that there is a part of myself in her fight, and let her go. 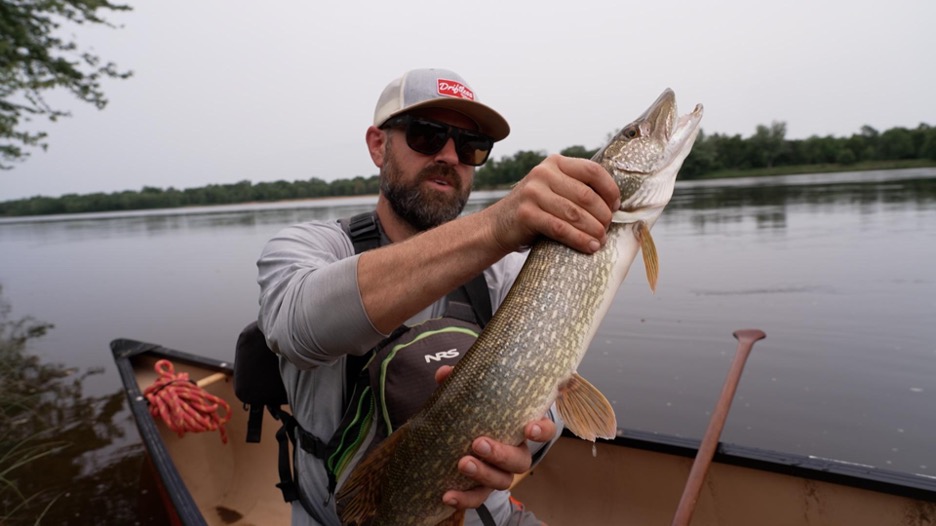 We are truly all connected.