Who are the Canids in Your Neighborhood? "Nature" Knows. - PBS Wisconsin
Skip to content 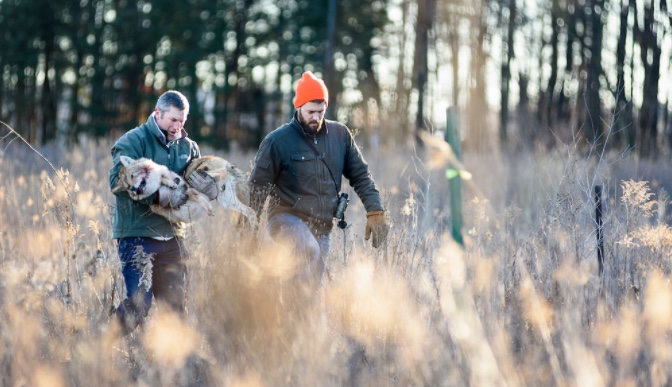 Who are the Canids in Your Neighborhood? “Nature” Knows.

But some footage may seem more familiar to Wisconsin viewers: the streets and yards of Madison’s University Heights neighborhood, just up the hill from Camp Randall Stadium and the University of Wisconsin-Madison campus.

Read on to hear about Nature‘s visit to Madison, the researchers – and homeowners! – who are encountering foxes and coyotes in residential neighborhoods, and what to do if you see a furry visitor in your area.

In 2014, a family of red foxes found a new home amidst the students and staff on the UW-Madison campus. Over the next several months, UW-Madison’s David Drake and his Urban Canid Project team invited members of the public to join them in their efforts to tag and track the foxes and coyotes roaming Madison’s streets.

The foxes are trapped – carefully – in cable restraints, tagged and fitted with radio collars so Drake and his team can track their numbers and their movements.

“I think this is a great outreach opportunity to talk to people about why these animals are moving into the city,” said Drake, professor of wildlife ecology and Extension Wildlife Specialist, in a January 2015 article.

Drake, who is interviewed in “Fox Tales,” is one of the few researchers studying the growing presence of foxes and coyotes in urban and suburban areas. Still, he says, “I would be very, very surprised if there’s not red fox in most, if not all, of North American cities.”

Madison isn’t the only city where canids are making inroads. Stan Gehrt, of The Ohio State University, referred the Nature crew to Drake after Nature filmed Gehrt’s research on coyotes (and raccoons) in Chicago for the episode “Meet the Coywolf.” (Watch here.)

Scientists from Bristol, England, an ancient coastal city with a population of nearly half a million people, are also profiled in “Fox Tales.” They have noted significant differences in public attitudes toward foxes in England – in part because these foxes do not carry diseases, such as rabies, that may cause Americans to see the animals as a threat.

According to a 2016 article, the intersection of science and social media has helped city dwellers monitor not just animals acting normally, but potential danger stemming from unusual behavior. When one coyote seemed to lose his fear of cars and humans – and became more active during the day – a Facebook post reaching more than 8,000 people shared tips for helping to re-instill the coyote’s fear.

“Research from across the country shows that public engagement and outreach can enhance wildlife management efforts and effectiveness, improve attitudes toward urban canids and reduce conflict between humans and wildlife,” wrote Kelly Tyrrell, of UW-Madison’s University Communications.

Foxes tend toward developed neighborhoods, finding shelter under decks, in garages and even sharing the sidewalks and streets with the two-legged residents of the neighborhoods. The larger coyotes – a threat to fox families with small kits – typically prefer parks and nature preserves.

Homeowner Lynn Gilchrist, who lives in University Heights, got in touch with Drake in the fall of 2015 after noting a growing hole under her garage. Now she knows that foxes roam all over her neighborhood, bedding down in multiple dens.

“Prior to this, I never understood that we had such animals in our area,” says Gilchrist. “It was fascinating to watch the kits when little, then seeing them be parented for several months.  At one point, they moved to another den because of a need for greater safety.”

Nature spent about two weeks in Madison during the spring of 2016. (A version of the program aired in Canada earlier this year; the PBS version includes more footage of Madison.)

The crew filmed mostly at night in order to catch the foxes’ movements. They filmed around Gilchrist’s basement and screen porch,  capturing the curving streets and wooded yards of University Heights in good and bad weather.

“It is a very nice neighborhood,” says Drake, in “Fox Tales.” He’s standing under a streetlight after dark, with cars, occasional sirens and other typical city sounds punctuating his interview. “But it’s also a conveyor belt of food.”

Aside from the opportunity to learn more about her furry tenants, Gilchrist was excited to see such a professional crew at work.

“They were terrific: very professional, quiet as they came and went during the night, always asked permission when wanting to make any changes to enhance the camera view,” she says. “Their expertise is amazing. If I were younger, I would have stayed up all night to see their work.”

Even after several years of observing and tracking the animals up close, Drake says there are still many things researchers don’t know. He’s excited to continue this research in the coming years.

Despite their predatory reputation, Drake sees canids not as a nuisance but a boon.

“As humans, we’re lucky that we have wildlife like red fox in the city,” he says. “Just about everyone we encounter enjoy and are a bit surprised to see red fox in their neighborhoods.”

Gilchrist continues to rely on the Urban Canid Project for tips on dealing with fuzzy neighbors.

“After the first year’s litter, we filled the holes to the den under the garage and put down five-foot-high wire fencing to block new digging… but to no avail,” she says. “There was a second kit litter last spring.  I am trying a new method to deter a third.  The foxes are very smart and like to come back to their previous den.”

She’s especially eager to see the final product of filming.

“I have the greatest admiration for those who capture amazing pictures of the natural world. This can only be done with patience and super knowledge of the animals and the environment.  This crew had it.”

If you see a fox or coyote in your area, what should you do?

Want to get involved with the Urban Canid Project?

Keep tabs through Facebook! Trapping season begins soon (hopefully in November, if the weather cooperates) and Drake will post public announcements of opportunities to walk the trap lines with professionals.

“If the people with us are lucky enough to be present when we catch a coyote or red fox,” says Drake, “they will get a great opportunity to see these remarkable animals up close.”

1 thought on “Who are the Canids in Your Neighborhood? “Nature” Knows.”