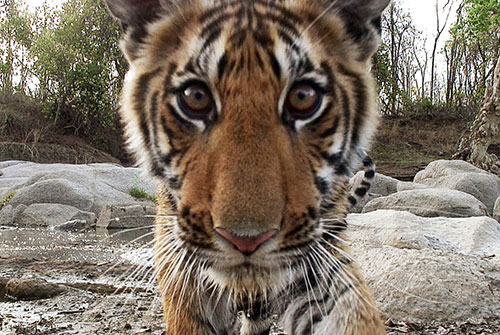 If you’ve been watching Tiger – Spy in the Jungle, you’ve enjoyed the most intimate glimpse at the lives of tigers ever filmed, from birth to playful adolescence and beyond. If you haven’t been watching, here’s your chance.

When you think of a stealthy spy, an elephant is probably the last living creature that comes to mind. Large, lumbering and slow, their prowess is doubtful. Yet, when it comes to documenting the lives tigers in the jungle, elephants are the perfect infiltrators.

The creators of Tiger – Spy in the Jungle, recognizing elephants’ remarkable intelligence and sensitivity, trained the giants to carry cameras on their tusks and trunks to collect footage, providing a glimpse into a striped world that would otherwise remain a mystery.

The trained elephant detectives used their Tuskcams and Trunkcams to shadow a group of tigers wherever they went, collecting film that shows the different stages of the tigers’ lives. Tiger – Spy in the Jungle also shows how the tigers interact with the other jungle animals, and how those interactions mature as the tigers age.

Episode 3 airs tonight, Wednesday, July 30 at 8 p.m. on WPT. This finale follows the tigers, now young adults, as they begin to assert their independence. As they learn to be kings of the jungle, many of the other animals shown in earlier episodes have to attempt to not become their prey.

If you’re ready to see tigers as you’ve never seen them before, and a wildlife world as rich as that of Africa – complete with sloth bears, leopards and more – Tiger – Spy in the Jungle delivers.