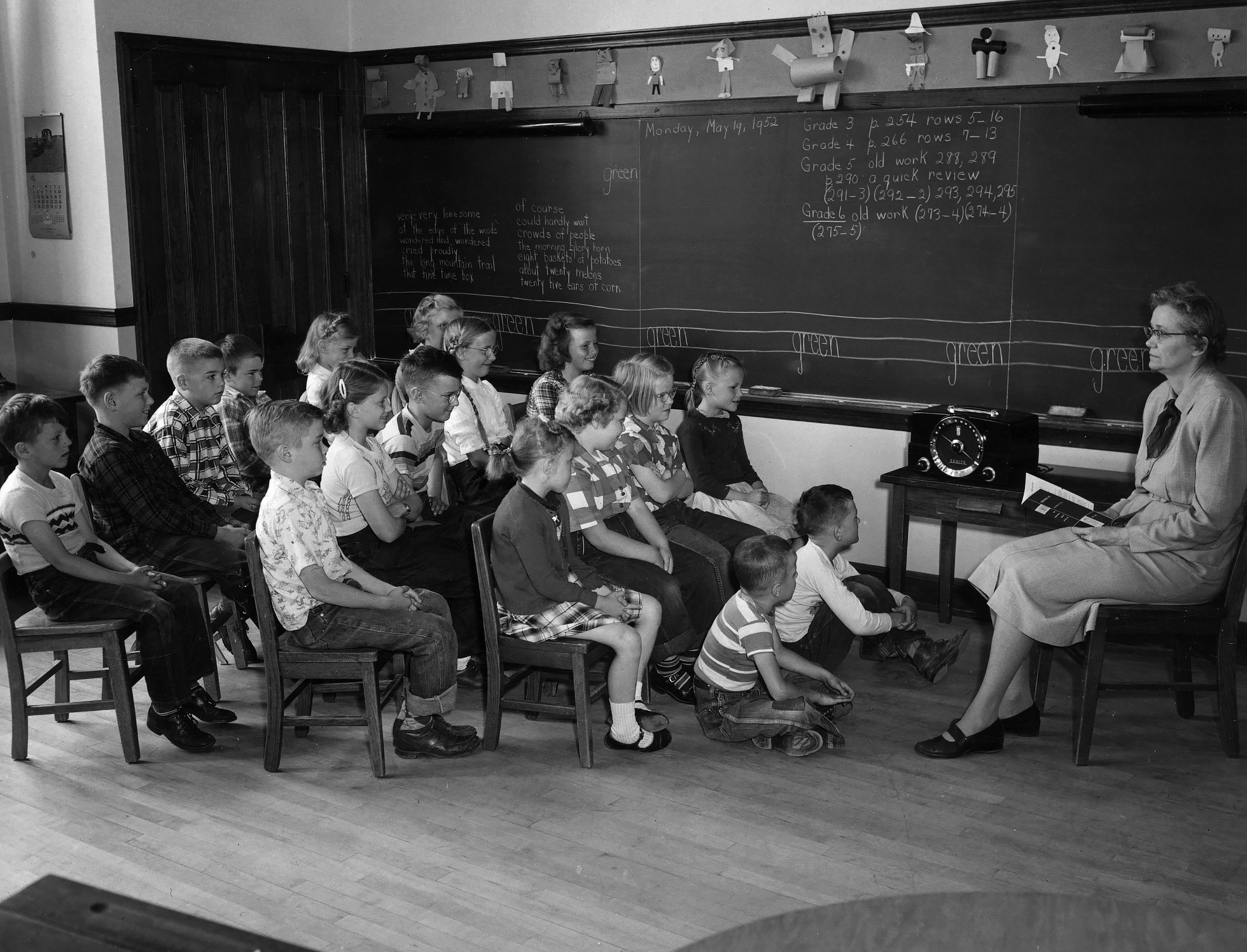 Jerry Apps, Wisconsin’s favorite chronicler of rural life, returns to WPT with his fifth special this March, celebrating the life and lessons learned in some of Wisconsin’s 6,000 one-room schools.

Just as the exceptional education her father received in a one-room school inspired him to become an educator, the dedicated teachers who led his daughter Susan Apps-Bodilly‘s classes inspired her do the same.

Now a second-grade teacher at Madison’s Falk Elementary School, Apps-Bodilly spoke with us to discuss some of the lessons that both she and her father continue to share.

Apps-Bodilly, who often joins her father to present about rural life, has created a companion book for young readers called One Room Schools: Stories From the Days of 1 Room, 1 Teacher, 8 Grades.

WPT: What are some themes running through this program?

APPS-BODILLY: I think my dad’s trying to capture the atmosphere of a one-room school. When people think back on school, they don’t remember the facts they learned so much. They remember how they felt about each other and the teacher – the relationships they built.

The relationships between the community, the teacher and the students were so important.

Some things about school have changed, and some things stay the same. Kids still want friends, and they want to be successful, and they come to school to have fun.

What kinds of stories do you remember hearing from your dad about his education?

Growing up with a storyteller for a father… when we went to visit my Grandpa Apps on his farm, we would eat dinner and then sit in the living room on the couches and wait for something to start, because we knew a story was coming. We would just ask any question, or we would say “Can you tell the one about the fish…” It’s very similar to how [WPT producer] Mik Derks interviews my dad now: they can start with a single phrase and get going.

My dad and my grandpa didn’t always agree about how the story was told. It was really fun; they were never quite the same each time, with different details.

In the talks we do with our cookbook, we promote the idea of a small moment triggering a story from your family and an opportunity for family members of all ages coming together to talk, creating a deeper relationship based on the people or things that are important in their lives. It could be a game you played, a recipe, a time you were with a friend. Some kind of a trigger that could create a story you can share.

I was really interested in the Chain o’Lake school Dad attended. We’d always pass it on the way between our cabin and visiting my grandparents; the school was right in the middle. It had long since closed and been converted into a residence, but I’d look out the window and wonder what it was like to go to school there.

Dad told us about playing softball; we could see the trees he used as bases. He also told us about being there with his brothers; that was unusual for kids in Madison to be in the same classes as their siblings.

On the first warm day, the teacher would take the kids out of school and hike down to explore around the lake, and then skate on the lake in winter. I always thought that was sort of neat, that they could take a walking field trip.

How did one-room schools fit into the communities they served?

Movies and books portray these teachers as being isolated, but I don’t think that’s necessarily the case. A one-room school was the center of the community – Dad says “it gave that community its identity.” For example, the Christmas pageant: even if you didn’t have kids at school, it was so popular that everyone came. When this identity is so important, everyone’s going to work together to make sure it’s successful.

You’d think that would be a source of incredible pressure, but there was actually a lot of support. The parents were part of the hiring process; some teachers lived with families. My dad doesn’t really talk about the parent school board in the film – the parents of students that attended the school – but they helped the teacher with the budget, cleaned and prepared the school and provided any other support that the teacher needed. They were really there for the teacher. If he or she needed anything, they just had to ask. 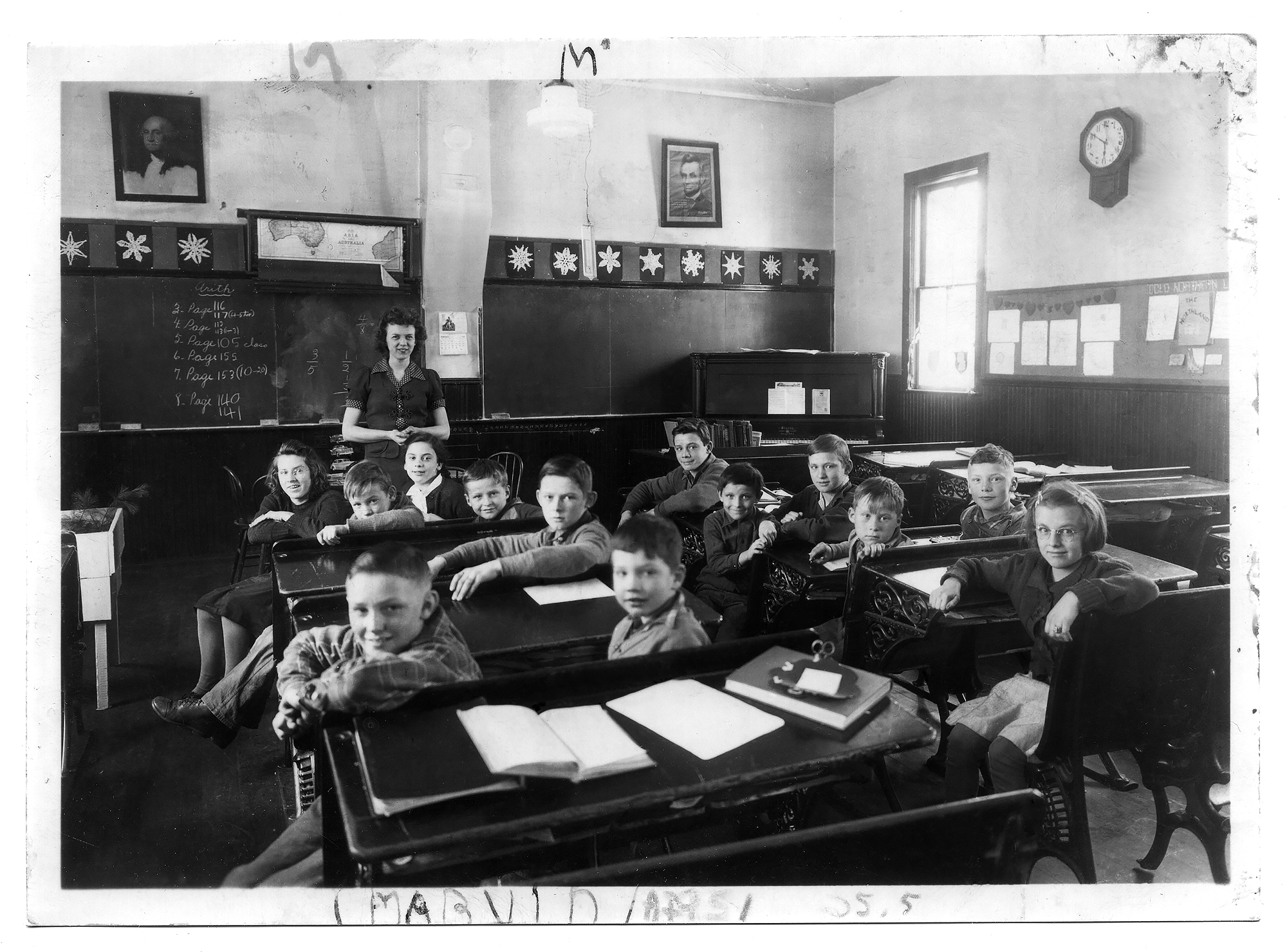 People who went to one-room schools are very convinced that it’s a very good education. Not one person I spoke with said they didn’t think they got a good education. Nearly all say that it was a great way to learn. (I had one gentleman raise his hand and say that he flat-out didn’t like school, but it wasn’t because of the teacher or the curriculum!)

What kind of schools did you attend growing up?

I went to Midvale Elementary here in Madison. At that that time, it was a K-5 building, with 25 kids and three classes per grade. I remember walking to school like my dad: taking my time and noticing things, like the bugs. But I was never late!

My kids now think it’s so strange that we walked home for lunch – which you wouldn’t have done in a one-room school, since it was too far.

I really liked all of my teachers. I remember everyone’s name, and what they did… I think I was just tuned in to what they were doing, since I wanted to be a teacher even in second grade.

Both you and your dad knew you wanted to be teachers that early?

Until I saw the film, I’d never heard him say that he decided to become a teacher from teaching other students! But it’s very common practice for teachers to say so, and that’s the expectation in a one-room school. It’s quite remarkable and wonderful.

What kind of research did you do for your book?

I used the research my dad had done for his book on one-room schools, which originally came out a few years ago, but then did my own interviewing. I re-interviewed him; my mom had also attended a one-room school near Westby, so we had all sorts of stories from her side of the family. My family is very good at keeping stuff, so we have all sorts of things like report cards.

And I always learn something new from the people who come to book talks.

What lessons and ideas have you taken into your own classroom?

A one-room setup isn’t so different from what I do today. When a teacher creates an environment in which students are expected to learn with and from each other, the whole community is stronger.

I have readers who are reading at a kindergarten level, discovering how reading works, and I have some kids who read at a fifth or sixth grade level, and need that challenge.

So I do things to create a community where it’s okay that kids learn in different ways, and – for example – a higher-level reader will sit with a buddy reader. It helps kids help each other. They teach each other how to learn, which is an interesting thing.

In a one-room school, a teacher had to manage eight years of curriculum, so she would pull over a group of sixth graders to work for 15 minutes on a geography lesson.

The neat thing about a one-room school was that you could listen in. If you’re a third or fourth grader, you could sort of pre-learn what’s coming up in fifth grade; if you didn’t quite hear or understand it the first time, you could get that material again because you knew it was coming. You were sort of “learning up and learning back.” A lot of people who went to one-room schools list that as a real advantage.

So when I see kids listening in to a lesson for another group, I say, “Go ahead! It’s not a bad thing!”

There’s also something to be said for building relationships with families, which the one-room school did naturally. Madison teachers work really hard to increase parent involvement and find ways to have parents become comfortable with coming to us. We know it’s essential to kids’ success.

What do you think viewers will enjoy the most about this program?

I think people will love hearing the voices from the School of the Air radio shows. That’s pretty unique to Wisconsin – and you obviously can’t hear that in either of our books.

That feeling of community, created statewide with a radio program, is still special today. Teachers use technology to try to do that today with Skype: visit around the world, talk to other classrooms, set up communication with people in Africa…

With so much technology out there, people still just love hearing a good story.

I wrote my book for a younger audience, but a lot of older people enjoy it because of the stories and pictures. People always say, “Is my school in your book?” There were 6,000 one-room schools in Wisconsin, so we couldn’t get them all! There are so many photos, both in my book and this film; they’ll have fun trying to see if they’re in it.