Q&A: Designing the set for 'Why Race Matters' - PBS Wisconsin
Skip to content 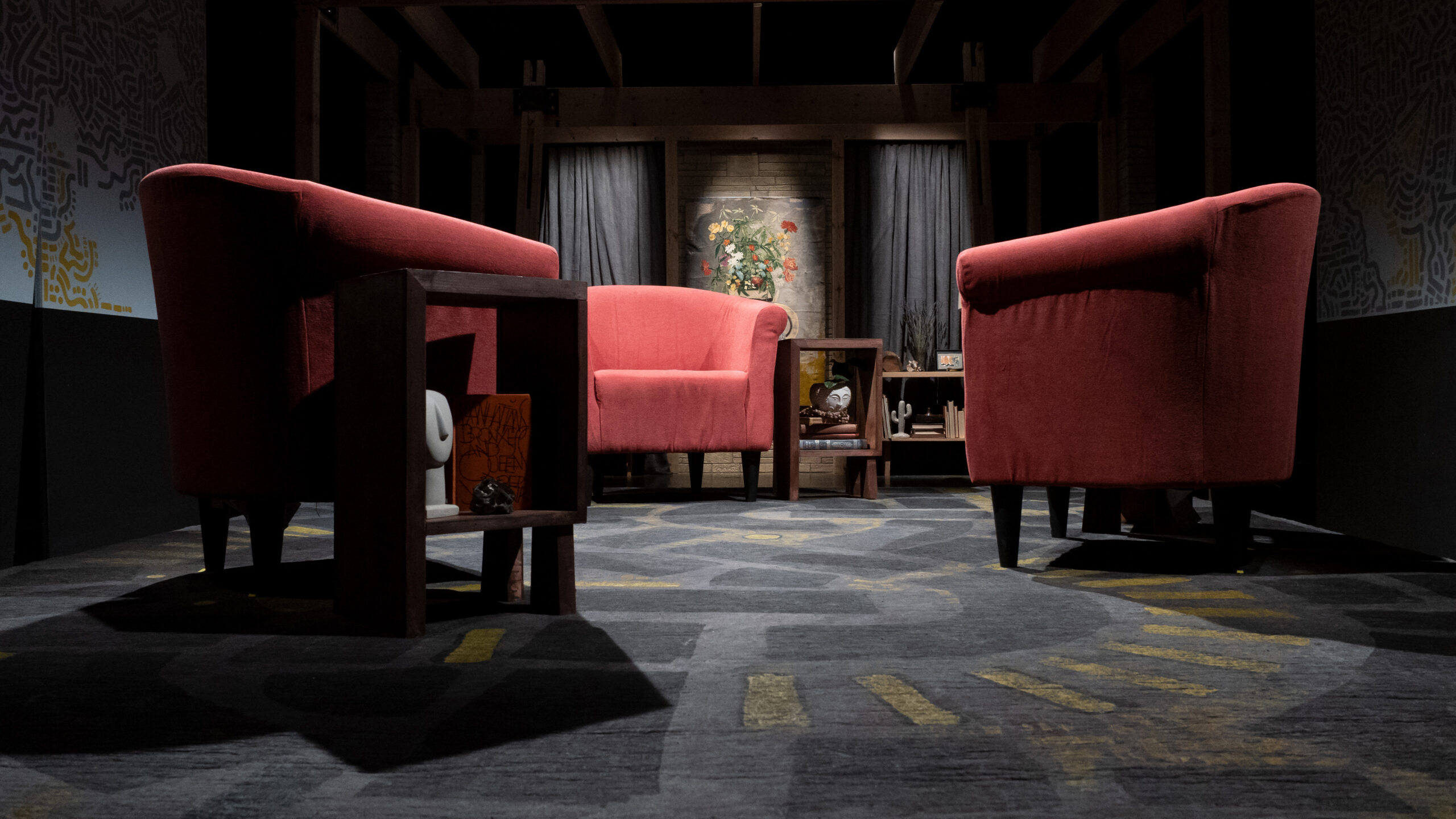 Q&A: Designing the set for ‘Why Race Matters’

Host and producer Angela Fitzgerald connects in conversation with everyday people whose work and commitments center on race, identity and achieving racial equity in the state. The program shares the layered, lived experiences of Black people in Wisconsin, exploring topics simultaneously historic and urgent — offering hope, guidance and resources to thrive.

The new season is available to stream on whyracematters.org and on the free PBS Video App, streaming devices and Smart TVs.

Cailin Short is an Environment Designer and Interactive Producer at PBS Wisconsin with more than 15 years of experience in theater and now television. In addition to leading the set design and building for our major events like Garden & Landscape Expo, along with other station productions, Short played a lead role constructing and designing the set for the second season of Why Race Matters.

Short also spearheaded a collaboration with Wisconsin artist Mike Lroy in the development of a number of key artistic elements that were featured in the Why Race Matters set. Watch the video and read the Q&A below to learn more about Lroy’s involvement and work in the set design process.

PBS Wisconsin: When you were first approached to design the set for Why Race Matters Race, what were some of the conversations you had early on with the production team for the second season?

Cailin Short: Angela really wanted it to feel intimate, but they also wanted it to be a studio production. She wanted it to feel like you were in someone’s living room, essentially, because they are really often difficult conversations, and they can be charged. So, wanting the space to feel as intimate as possible was a high priority for Angela and myself. 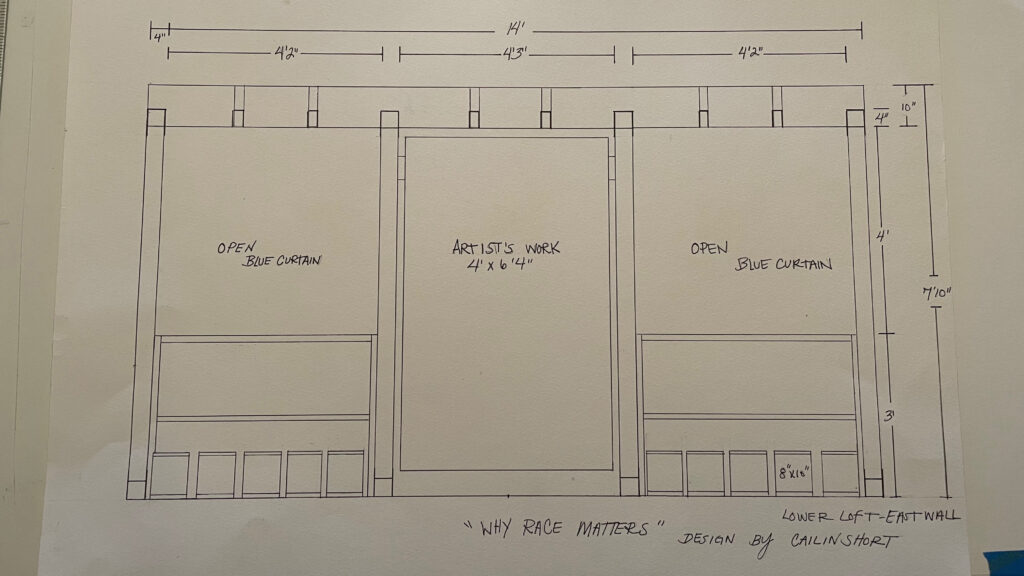 PBS Wisconsin: When you were thinking about comfort as key to the set, what sort of elements were you thinking of?

Short: I was looking at a lot of architecture. I have this book called “Small Urban Interiors: 500 Solutions for Living.” I’ve had this book since I was in high school when I wanted to be an interior designer. And I often will, when I design, get inspiration from architecture. It’s probably one that comes from my background as a carpenter and residential carpenter.

I was just trying to find inspiration about how I could make this space feel intimate but also be large enough to accommodate the guests because there’s two or three people on stage at all times and they are spaced six feet apart because that was something that, at the time, the discussion was wanting to maintain some COVID-19 protocols.

So that kind of spurred a conversation. How, do we get these people on the set and make sure that they’re seen the way that they want to be seen? It’s important to note that in the first season, they had established some shooting patterns that, for the sake of continuity, they wanted to continue into the second season. So a lot of utilizing an over-the-shoulder shot to help minimize the amount of space between the interviewer and the interviewee.

I was trying to figure out a way that I could design the space so that the cameras could get all around. It’s an alley staging, which basically means that you have views on all three sides. I was looking for things that could help justify that configuration, and as I was looking through this design book, I found this loft in New Jersey. When I saw this, it was kind of like all of these tumblers fell into place for me. It was kind of a homage of all the things I like and all the problems I needed solved. 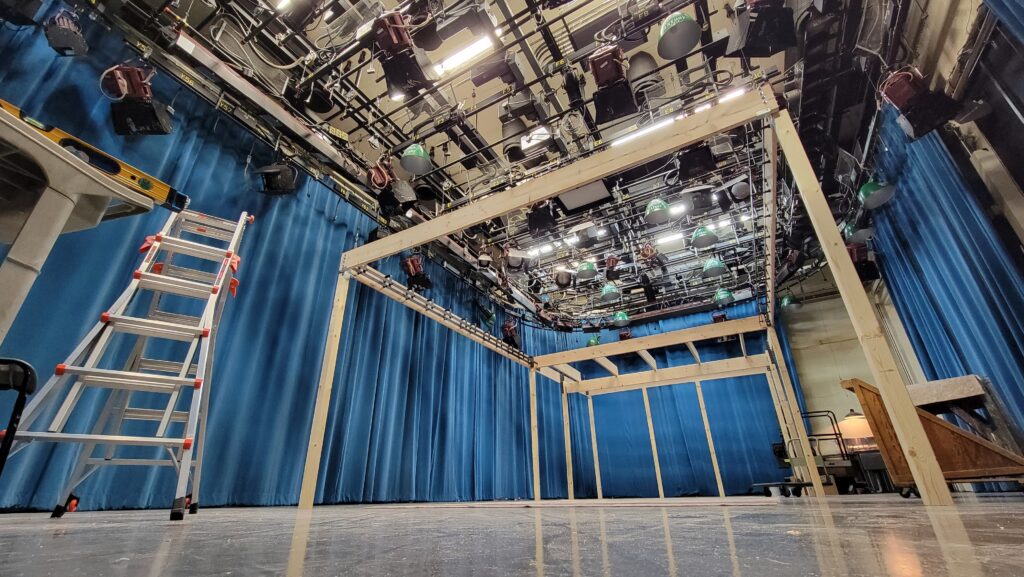 PBS Wisconsin: The show has a lot of metaphorical depth, and there’s also a lot of physical depth in the actual set. How did you come into that idea?

Short: It is a double set. The back area, the library is what I call it under the foam mezzanine, I was thinking could be another location to do another one-on-one. Or maybe Angela is speaking to the camera and the chair physically gets moved back there and she’s working back there. That was a secondary location that I had created in case they decided they wanted to use it.

This project was very much evolving while they were still figuring out what was wanted. There needed to be a level of flexibility in the design so that when they landed on something, I presented multiple options to solve problems. It’s almost like I’m trying to solve problems before they become problems, or I’m looking for answers to questions that haven’t been posed yet. 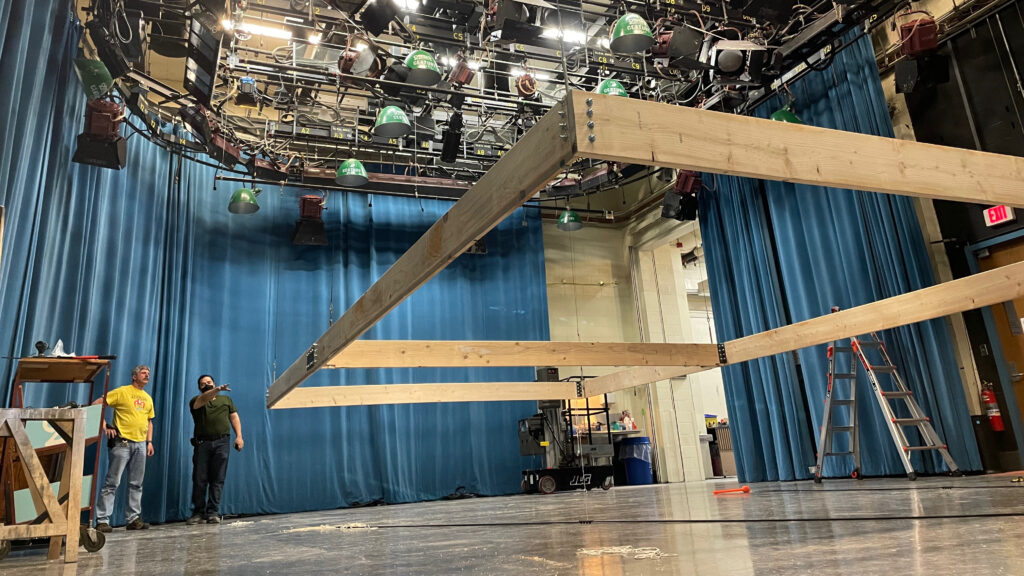 PBS Wisconsin: At what point did you decide to bring in a collaborator?

Short: Really early. That was speaking to the fact that I am a white woman. I didn’t want to be the only voice in the room for this. I specifically made the choice to bring on an artist of color [Mike Lroy] to be able to work with and listen to their views, what the space should be. And it was a really fantastic collaboration and an excellent chance to be able to collaborate.

I really also didn’t want the focus to be on my work at all. Mike Lroy specifically is a muralist as one of his art forms. He responds to the environment around him in order to create. As soon as I chose to work with Mike and got to meet him, my focus shifted to: I am just the architect providing the space for which the artist gets to paint and do what they need to do. I was just facilitating the physical space for Mike to be able to produce his art. 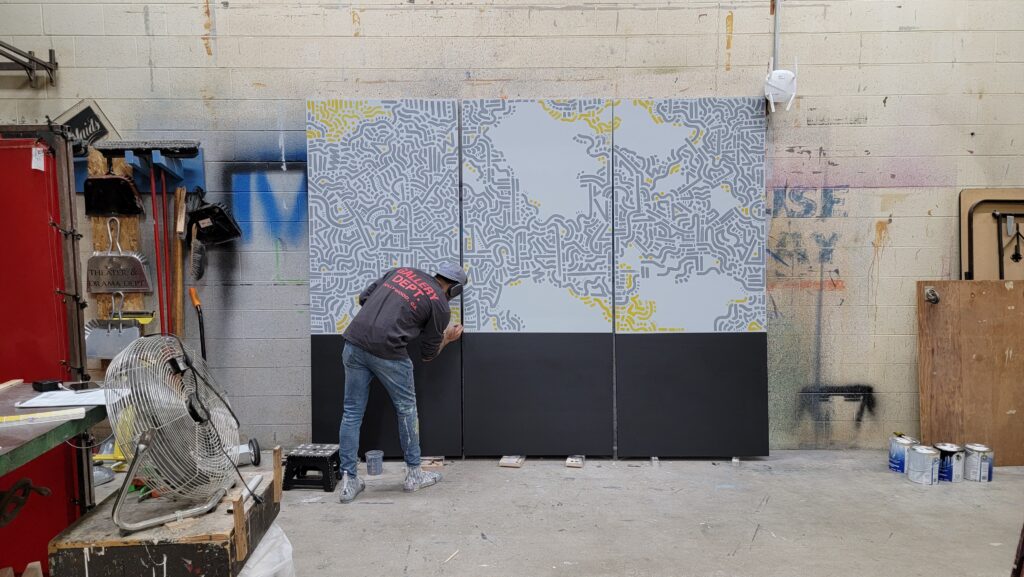 Artist Mike Lroy working on one of his design elements for the Why Race Matters set.

PBS Wisconsin: When having conversations with Mike, how do you toe the line of respecting his artistic expression while working within a restricted medium of television production and then also a physically restricted set?

Short: Communication and collaboration with other artists is a practice in specificity, like being really specific with your language, but also you have to release the ego and just trust that the other artist is going to be able to produce what is necessary. But also, that said, since it is such a restrictive medium, wanting to make sure that they aren’t creating something that isn’t appropriate in the sense of fitting the restrictions of television. So wanting to set Mike up for success in that sense. In my long experience working with artists and Mike’s long experience of working with clients and being an artist, he was the perfect fit. The amount of mutual respect we have for each other. That’s a huge thing in collaboration. 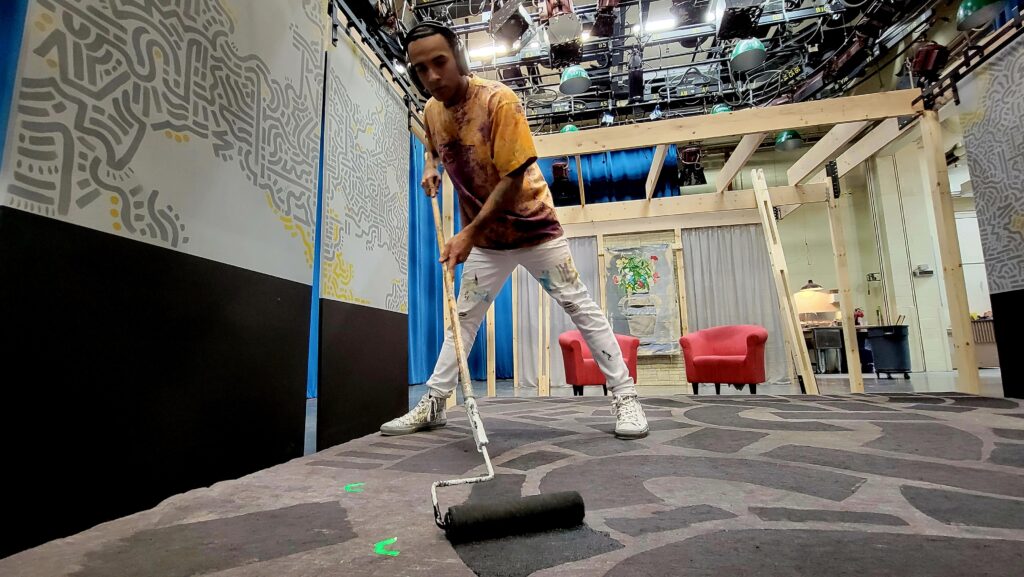 Artist Mike Lroy working on a design element for the set of Why Race Matters.

PBS Wisconsin: What are the elements of his work that drew you to him in the first place?

Short: Mike has an incredible attention to balance in his work. All of the spacing between his lines and all the line weights, that’s all done freehand. Then, once he decides on what the ratio is between negative and positive space, he maintains that through the entire piece. I think that definitely was something that drew me to his work. It’s this motif that he has created that’s a signature for him. The spacing between the lines and then the line weights themselves. And how those two are in balance is, I think, what creates that energy that is able to be perceived physically. There’s something about the harmony of those. The negative and positive space being in balance is really visceral.

PBS Wisconsin: How do you feel about the final product? 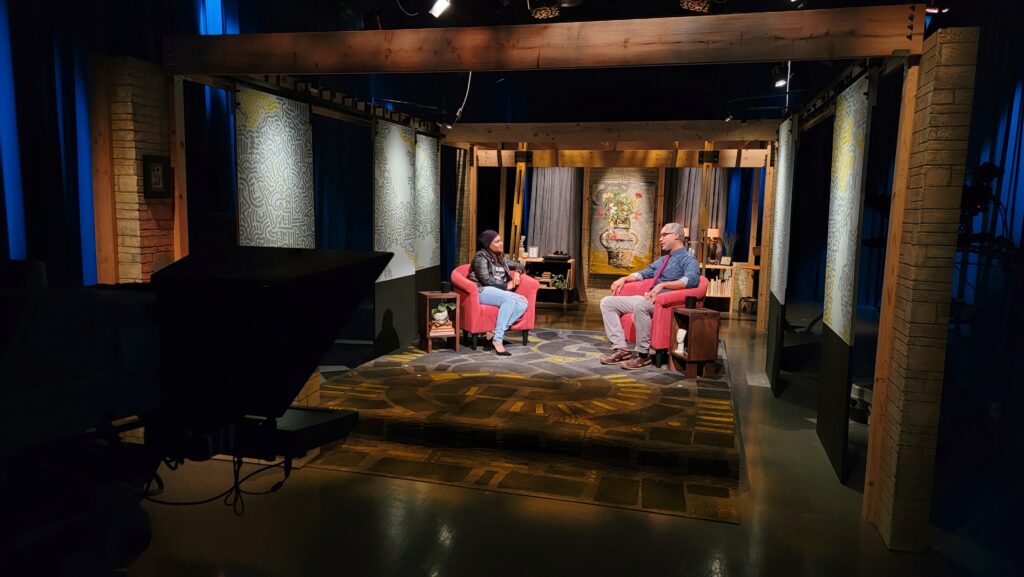 Behind-the-scenes shot of an episode recording of Why Race Matters.

Behind the Scenes Art Made in Wisconsin Why Race Matters