Q&A: Designing the Set for "The Light" - PBS Wisconsin
Skip to content 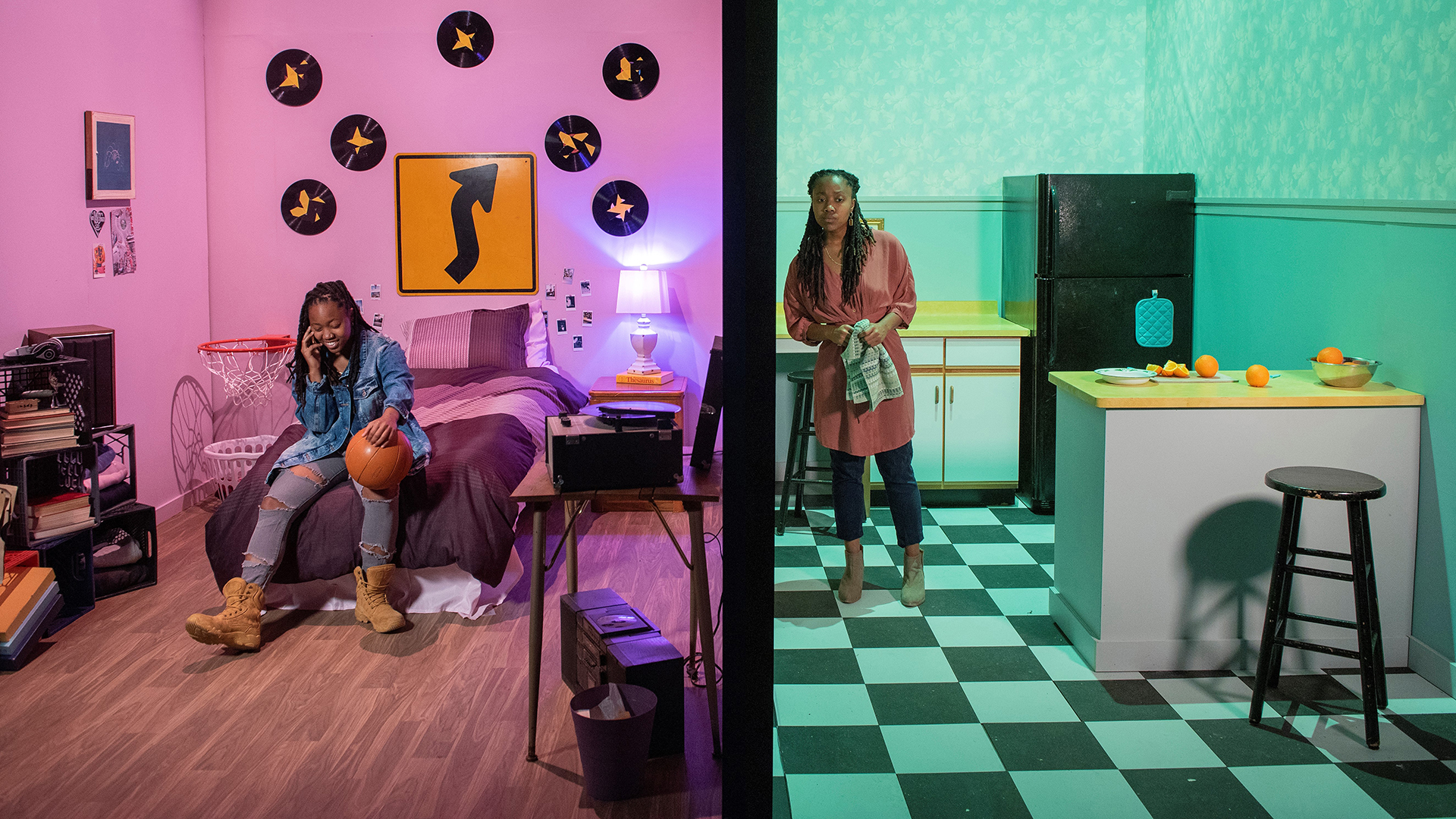 Q&A: Designing the Set for “The Light”

PBS Wisconsin is proud to premiere The Light, a new digital project showcasing the wide-ranging talent and vivid storytelling of Zhalarina Sanders — a rapper, playwright, actress and producer featured in our 2018 documentary Hip-Hop U.

The Light is a love story told through three sequential music videos. Together they weave a lyrical, autobiographical narrative exploring the complexities of identity, coming-of-age, faith, self-actualization, and the bonds and tensions between parent and child.

The nature of the performance introduced an array of new production and design challenges for our crew at PBS Wisconsin. The Light is a one-person show — Sanders plays herself, as well as the role of her mother Diji — combining elements of music, film, and theatrical production into a fast-paced and emotionally dynamic story. Sanders’ lyrics are packed and evocative — making the set a crucial tool to ground the audience in her story. 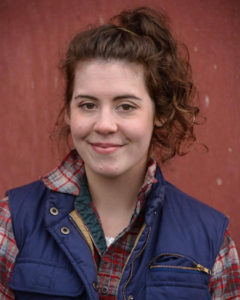 Cailin Short is a set designer and project manager at PBS Wisconsin with over fifteen years of experience in theater and now television. In addition to leading the set design and building for our major events like Garden & Landscape Expo, along with other local station productions, Cailin played a lead role constructing the real and surreal spaces of Zhalarina’s world in The Light.

We sat down with Cailin and asked her about the set, The Light’s design challenges and what she enjoyed most about collaborating on this production.

Q: What was new or different about The Light from a set design perspective?

A: Well, first off, The Light is a narrative story that demanded a narrative studio set — one that could move the characters through their beginning, middle and end. I’ve only been at the station a few years, but my understanding is we haven’t done a narrative set in recent history, and certainly not like this. Obviously we have productions in our animation department that follow a narrative, but this is the first set in a while for which the story presented a very specific biographical/autobiographical structure.

The deeply theatrical nature of the piece was also really different from recent projects. Zhalarina’s background is in theater and performance. That’s the art form she is used to, so the set needed to adhere to theatrical standards as much as it did studio production standards.

A style board for the set of “The Light.”

And movement was a big one – how the artistic team wanted the story to move and be shot — the set had to be structured differently. They wanted to film the first episode in one long shot. All of the scenic locations had to be physically connected so Zhalarina could move through the story and set fluidly. So, the demand for rapid, multiple locations was probably the most striking difference. Just the sheer amount of locations — we created 9 different scenic settings!

Q: Can you describe where you were situated in the collaborative/creative process?

I was brought in a little later. Rodney Lambright (Art Director), Trevor Keller (Managing Producer), Zhalarina and Jake Penner (Performance Director) collaborated to create and shape the story. When I came in, my job was to take the narrative in the poems and spoken word pieces Zhalarina had written, and assign action to drive the piece forward. A lot of the motivators of the piece were devised as a group. We relied on classic dramatic structure and it was useful for me to jump in at that point, because I have such a strong background in theater, theater critique, dramatic structure, and narrative creation.

Jake Penner has worked for Foreword Theater Company and for American Players Theatre. So he’s a well-established director in the community. With all of us in the room together, trying to reallocate this piece back into the world of video — it was a huge collaboration. So many different specialist vocabularies needed to be translated, mixed and applied.

Q: The Light has such a dynamic emotional range packed in a very short format. It seems that the set not only had to accommodate swift pacing but also a wide range of moods. Can you talk about this?

Sure. Let’s just take the classrooms as one example. In Zhalarina’s first classroom, we see her in her original school when she was in ROTC, which evokes really strong positive memories for her. So, we kept it very classic – a classic public high school with a warm color palette applied. The colors we used in both classrooms were the actual colors of her different schools. 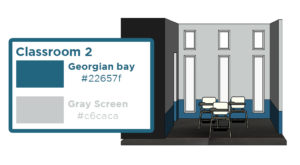 A style board for Classroom #2 in “The Light.”

The second school was the school she was sent to — akin to a private military academy. The real school actually used to be a prison and is quite bleak. The set windows we built for the second classroom are what the windows actually look like. The colors are cool. So the schools themselves each had a mood attached reflected through color, line and costuming.

Q: Was there a lot of intentional symbolism in the lighting or props?

I didn’t work with lighting. Rodney (Art Director) working with Will Salzman (Lighting Director) chose the lighting gels to establish mood and set-up the mood board. Zhalarina gave us details about what her room looked like in high school so the set definitely nods to those details — she loves basketball so we put a  basketball net next to the hamper.

The pink and purplish tones of the room, while not Zhalarina’s favorite colors, really help convey mood. Because purple, specifically, is a color that can be really sad or really happy, and because that bedroom was going to have such a big emotional shift happen within it, we needed to pick a color that could carry those two emotions.

Another example is the part where Diji finds a tissue with lipstick on it. Zhalarina herself didn’t wear makeup when she was in high school, but the girl she was seeing did. So we added that prop to motivate the story and move it along. You know, when your mom knows that you don’t wear makeup, and finds something like that, and thinks, “What’s goin’ on?” So, there are a few points within the story that we had to use props to help propel and explain what was happening. Zhalarina’s first love did give her a set of dog tags, so that became a really important prop in the story to track it forward. 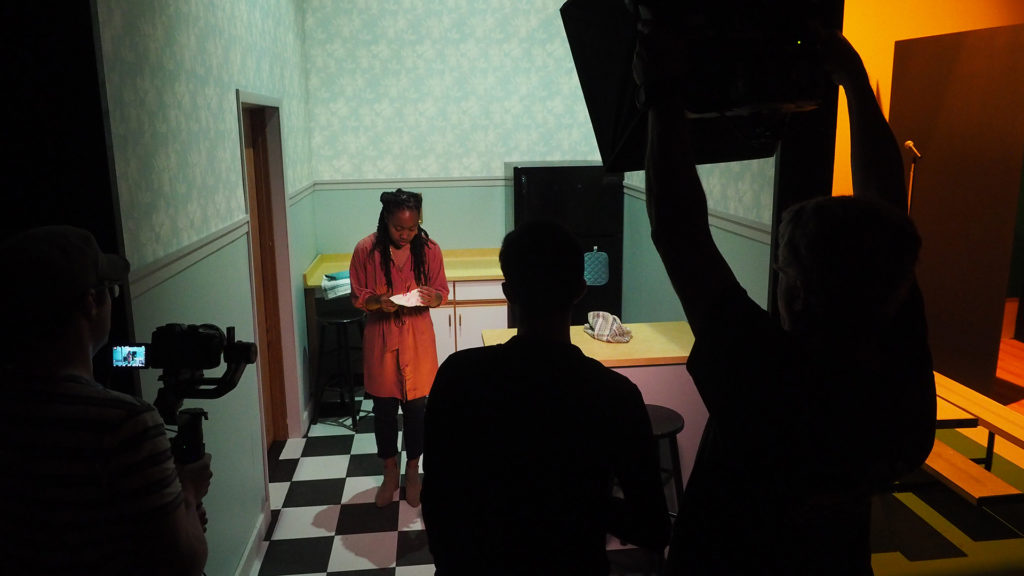 Q: What did you love most about working on The Light?

Well, Zhalarina for starters — she is just unlike anyone. She’s so, so kind and positive, clear-headed and easy to collaborate with. She’s phenomenally talented and she faced a huge artistic challenge head-on. I think it’s incredibly important as artists to challenge ourselves to move our work forward.

I think my other favorite part was the Kabuki Drops. That was my first time actually getting to build a set with a Kabuki Drop, using a classic element of theater to help articulate her journey. What’s on those scrolls are  Bible verses Zhalarina turned to that she found really helpful during the period of time The Light covers.

Q: What would you want our PBS Wisconsin audience to take away from The Light?

I hope they take away that love — the experience of it — is so intrinsically human — it transcends everything. And heartbreak is universal. And what Zhalarina is portraying here is an exceptionally difficult thing to deal with as a teenager. There’s also this very specific “push-pull” relationship that we have with our parents as we come into adulthood that is painful. When you’re a teenager, you’re at war with your parents but also able to see the various forms of stress they’re under. Zhalarina’s character in the story is sensitive to the pressures on her mother even as she feels Diji’s lack of acceptance. I hope the audience sees in The Light that human relationships, including the relationship with oneself and one’s gifts, are the most important thing.