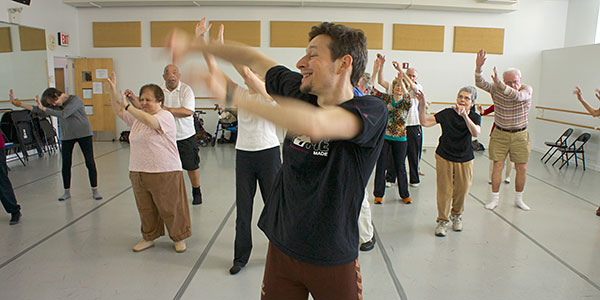 This week on Director’s Cut we welcome director David Iverson to discuss his film, Capturing Grace.

Capturing Grace follows several people with Parkinson’s disease and tells the story of what happens when they team up with acclaimed dancers from Brooklyn’s highly regarded Mark Morris Dance Group. Iverson is quite familiar with this debilitating disease. Not only does he suffer from Parkinson’s, his father and brother do as well and his passion for telling this story, and filmmaking in general, are evident from the start of the interview.

Watching people with Parkinson’s dance is fascinating in that those with the most advanced stages seem almost more at ease dancing than sitting still. The most severe case in the film is Cindy, who struggles through sentences when talking and is constantly moving while sitting. Watching her dance so fluidly is fascinating and therapeutic even to the viewer.

One of the other cases in the film is Charlie, a former star athlete and fitness guru. Seeing Charlie embrace dance as an escape and new form of exercise is even more uplifting than it is heartbreaking. The moments of ‘grace’ in this engaging documentary are too many to list.

Iverson is a Wisconsin Public Television alum. He worked as a writer, reporter and executive producer during his time at WPT and it was a pleasure to interview him and to see his excitement for being back in Madison.

He also was the writer, correspondent and co-producer/director of the award-winning 2009 Frontline documentary My Father, My Brother and Me which also explores Parkinson’s and his family’s experience with the disease.

His new film, Capturing Grace is as informative as it is entertaining with each character experiencing their own personal triumph of the human spirit. If you or anyone you know has Parkinson’s or if you just appreciate deft storytelling, please join my this Friday night for Director’s Cut. Hope to see you then!