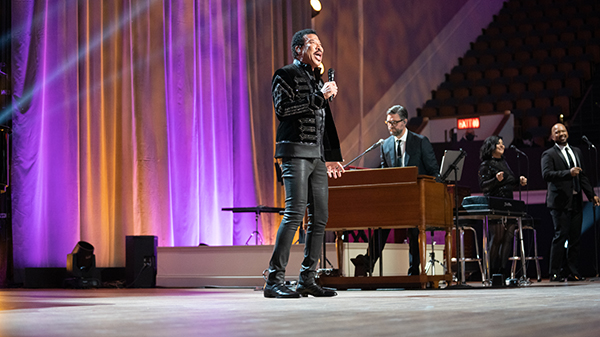 Lionel Richie: The Library of Congress Gershwin Prize airs May 17

This May, The Library of Congress Gershwin Prize for Popular Song salutes musician Lionel Richie with an all-star tribute concert in Washington, D.C. The celebration premieres 8 p.m. Tuesday, May 17 on PBS Wisconsin.

The Library of Congress Gershwin Prize for Popular Song celebrates the work of an artist whose career reflects the influence, impact and achievement in promoting song as a vehicle of artistic expression and cultural understanding.

A songwriting superstar of the first order, Richie is known for his mega-hits such as “Endless Love” and “Hello,” and he co-wrote one of the most important pop songs in history, “We Are the World,” for USA for Africa. His song catalog also includes his early work with the Commodores. Richie achieved the incredible distinction of writing number one songs for 11 consecutive years.

Beyond his own impressive music career, Richie has mentored young artists as a judge on ABC’s American Idol for the past four seasons and is set to return for the show’s 20th season.

Richie’s songs are part of the fabric of pop music and American culture. The Tuskegee, Alabama native has sold more than 125 million albums worldwide. He has won an Oscar, a Golden Globe, four Grammy Awards, the distinction of MusiCares Person of the Year in 2016 and was a Kennedy Center Honoree in 2017.

“This is truly an honor of a lifetime, and I am so grateful to be receiving the Gershwin Prize for Popular Song,” Richie said. “I am proud to be joining all the other previous artists, who I also admire and am a fan of their music.”