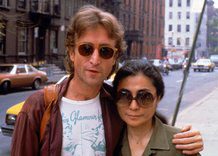 After the end of The Beatles, John Lennon left England to start a new life with Yoko Ono in the United States. He quickly went to work in the anti-war movement and through a decade of twists and turns created some of his finest music. This fascinating documentary shows a side of Lennon’s life that many of us didn’t previously know, shining a light on an artist who found a welcoming refuge of normalcy after being the world’s bigeest rock star.

The clip below shows one of those fascinating moments — John walking through Central Park, almost completely unrecognized, until a friendly fan asks for an autograph. And while it was the city where he unfortunately gave up his life to an assassin, John Lennon loved New York City because he could go to the movies, visit a restaurant and walk through the park.

He could just be John.