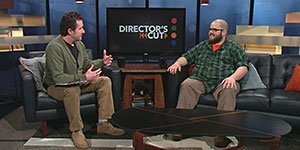 Isthmus of Misfits on Director’s Cut

This week, Director’s Cut welcomes Andrew Butts to discuss his film Isthmus of Misfits. This documentary explores Madison’s stand-up comedy scene through the eyes of comics who have been performing for years and others who are just starting out. Despite the fact that the film’s subjects are a bit green, they are not camera shy and are very eager to discuss comedy stylings, theories and venues.

Not only is the energy of the comics the most compelling part of the film, Isthmus of Misfits actually depends on the charisma of its ‘actors.’ That is the definition of a low budget film. Butts had all of the comics sit on the same couch in the same spot and started recording.

From struggling parents, to people working three jobs to recovering addicts, this film definitely captures what it’s like starting out in comedy and pursuing a dream. As a recovering stand-up myself, it was fun to revisit those days of uncertainty and the idea that the whole comedy world awaits you.

Misfits is not fancy or visually stunning by any means, yet Butts does a nice job of bringing out the artist behind the performer in the film. During the interview we welcome two of them to the set – Jackson Jones and Ian John. This is Butts’ first feature length documentary and with his connections to the burgeoning Madison comedy scene, the subject of his first film is a no-brainer. Be sure to check out my interview with Andrew Butts on Director’s Cut this Friday night at 9 on Wisconsin Public Television. Hope to see you then!