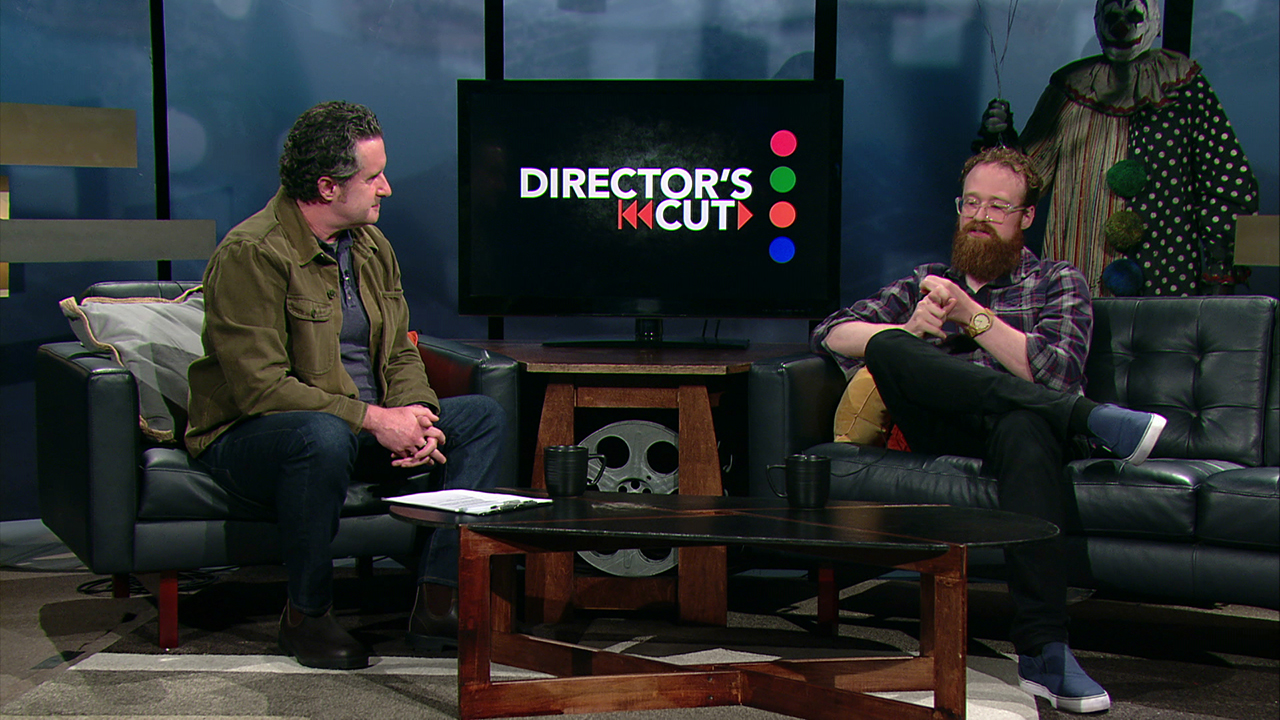 Did I scare you? Probably not.

Rarely does a written “boo” illicit fear in a reader. It was worth a shot, if for no other reason than to let you know there are good scares right around the corner on PBS Wisconsin’s Director’s Cut Halloween special. This year director Adam Krause joins me in the studio to discuss his macabre masterpiece, Gags the Clown.

Gags is a creepy, homegrown effort shot on location in Green Bay. As if regular clowns aren’t scary enough, Gags dresses in dark colors, carries black balloons and terrorizes the streets of Green Bay after dark. At times, the people who encounter Gags aren’t sure what to make of him. Is he just pranking? Some weirdo who rented a clown costume? As it turns out, Gags is much more threatening and his black balloons are deadly. No one is safe – not young professionals, partying teenagers, a right wing podcaster or even members of the Green Bay Police Department. Gags appears to bring terror just for the sake of doing so and he does it well.

If you didn’t catch Gags the Clown during its limited theatrical run, it still might sound familiar. Krause initially shot Gags the Clown as a short film about six years ago. In a brilliant marketing campaign, he and his team released photos of Gags in various locations around Green Bay – holding his black balloons as he walked the desolate streets, stood under bridges or hung out in parking garages, which are eerie places to begin with. They made no mention of the short film, instead just letting residents of Titletown draw their own sinister conclusions about this clown in his grim threads. The campaign went viral (no easy task) and got coverage on national news outlets and caused a bit of alarm, locally. The attention the social media campaign received really gave Krause no other choice but to turn his creation into a feature-length film.

During our discussion, Krause talks about the challenges of turning a short into a feature length film. As difficult as this can be, I actually preferred the longer version. It was well paced and not as predictable as horror films can be. Like any film, it begins and ends with the script. The film takes place all in one long night in Green Bay. The filmmakers provide “edge of your seat” moments and opt for terror as opposed to gore for the most part. The story moves from set piece to set piece before culminating in a really macabre ending that I did not see coming. And just when you think the film has wrapped up, there is yet another curve ball thrown at one of the main characters. Great fun!

Krause also delves into his influences as a young filmmaker while growing up in small town in northeast Wisconsin. The film is well shot and the effects are first rate. The setting was also well dressed. I asked Krause about shooting in Green Bay (his adopted hometown) and his decision not to involve the professional sports team that calls Green Bay home. The name of said team escapes me at the writing of this article, maybe the Green Bay Attackers? Sorry, I’ve got horror on the brain. In all seriousness, Krause does a nice job making Green Bay look gritty and scary in his film, in effect giving it a different identity than what it is known for worldwide.

For those of you who might be hesitant to watch a straight up horror film, I will say there are some truly amusing moments that will make you laugh. In fact, possibly the most fun during our time on set was with the special guest who dropped by for added unease. Savvy readers might already have guessed who it is, but our special guest was quite helpful throughout the recording and actually brought a few laughs, something his character was unable to provide during the actual film. Let’s just say this guest is a well-rounded performer.

So hand out that candy, grab a bowl of popcorn, turn out the lights and join us for some Halloween fun starting at 8 pm Monday, Oct. 31 for Director’s Cut and Director’s Cut Presents on PBS Wisconsin, your home for independent film!