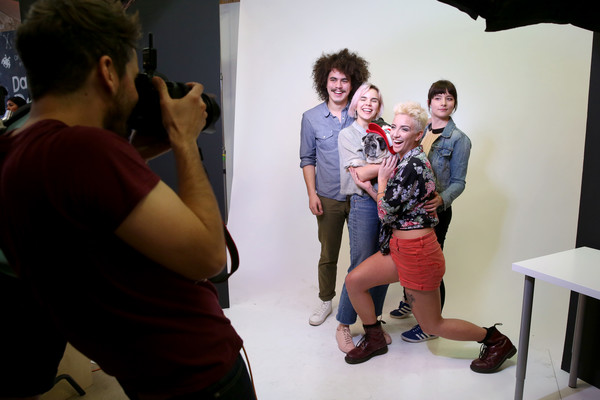 When her chemotherapy-patient mother urges her to take a vacation from playing nurse, grad school dropout Leigh invites her old high school boyfriend along on a camping trip. The two soon find that confronting old wounds during a weekend in the woods is anything but restful.

Read on for more about this film, and about my interview with director Carol Brandt!

Brandt shot her film in Wisconsin and became a festival darling in 2018. Pet Names had its world premiere at the South By Southwest (SXSW) Film Festival in Austin, Texas and followed that up with screenings at the Milwaukee Film Festival and Weyauwega Film Festival, where it won Best Feature Film.

Meredith Johnston plays Leigh, who left school to care for her ailing mother who, sensing Leigh needs a break, urges her to get away. Leigh decides to go camping for a couple days and invites her ex-boyfriend Cam, played by Rene Cruz.

The film was shot over three weeks, including two weeks at a campground in Lone Rock, where cast and crew actually camped together. The rest of the time, they shot in Milwaukee.

The multitalented Meredith Johnston was not only a charismatic leading lady: she also wrote the script for Pet Names and composed music, as well as serving as associate producer. Not bad, considering this is her first time acting OR screenwriting for a feature film!

She often performs in Chicago with an improv theater troupe, and she puts those skills to good use in the film. She has a classic old-time Hollywood voice, complete with a little bit of rasp, that give her lines  an intriguing edge.

During our interview, Brandt said that the two were on the same page regarding the material and collaborated seamlessly. Together, these two filmmakers have provided a nice look into the world of Midwestern millennials.

Brandt is a 2014 graduate of UW-Milwaukee Peck School of the Arts (read an article here) and calls Milwaukee home. Her first feature film, Things Found on the Ground, had its premiere at the New Orleans Film Festival when Brandt was just twenty years old. These days, she makes a living primarily as an editor – but she’s been doing more and more directing, which she prefers. I enjoyed talking to her about her perspective on directing other people’s material.

Please join me this Friday, May 10 for my interview with Carol Brandt on Director’s Cut at 10 p.m. And stick around after our interview, when we’ll air the full-length Pet Names for you to enjoy.

And tune in next week, when I’ll be chatting with Ken Pickett & Roy Blakey about their documentary The Fabulous Ice Age. If you’ve ever spent an afternoon at the Ice Capades – or wished you had! – you won’t want to miss it.