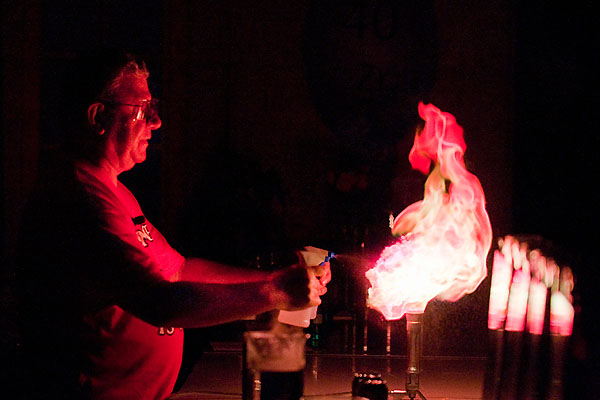 It’s always fun to watch a show that discusses safety precautions and fire extinguishers before a lecture begins. So it is, once again, for University of Wisconsin-Madison chemistry professor Bassam Z. Shakhashiri, leading his 47th annual “Once Upon a Christmas Cheery In the Lab of Shakhashiri” in 2016.

As Wisconsin Public Television prepares to celebrate 100 years of public broadcasting in Wisconsin in 2017, the lecture, which airs multiple times over the next few days (as well as online), is a perfect example of local, educational programming that has enhanced the station’s reputation for outreach and engagement.

WPT has been there from the early years, broadcasting since 1973. The program has grown so popular that it not only sells out but airs on television stations around the country. Here on WPT, upcoming airings take place at the following times:

Not by a TV? Watch the full program online or on the PBS channel of your Roku or other digital TV device now!

Then, read more inside about the history and pageantry of this holiday mainstay.

An exciting blend of explosions, flames, brilliant colors, special guests, amazing sights and sounds and, yes, science that is truly fun, the program was filmed earlier in December in the UW-Madison Chemistry Building. 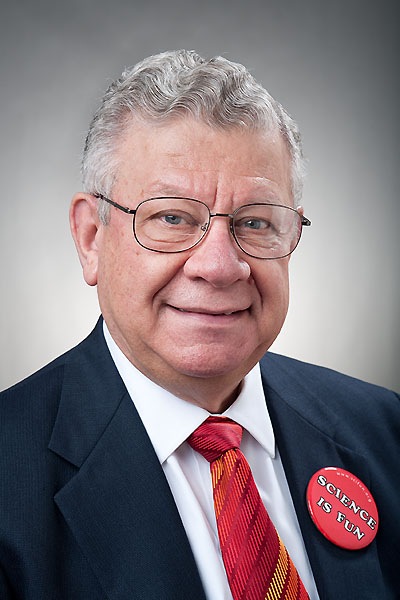 The irrepressible Shakhashiri, appearing in his ubiquitous red “Science is Fun” shirt, gave his first holiday lecture in December of 1970 to students in his general chemistry class.The event grew to include friends and other students in 1971, then two public lectures in 1972.

He based the lectures on those of the noted 19th century British scientist Michael Faraday, who presented a series of Royal Christmas Lectures beginning in the 1840s. Faraday found that some of his more unorthodox ideas about science were easier to share with younger viewers, who reacted with enthusiasm to his dramatic yet elegant presentations.

Writes Shakhashiri, in the program:

Faraday sought to awaken the sense of wonder in his listeners. He knew that once a person could be made to wonder about the world, it was only a short step to studying it. He strove to point out that if you looked closely at the most ordinary thing, such as the force of gravity, it ceased to be ordinary and became somehow miraculous.

Throughout the 19 annual Christmas Lectures that he presented, Faraday did all he could to urge his listeners to see and judge for themselves, to experiment, and to question nature directly whenever anyone discovered something out of the ordinary.

Rodney Schreiner, a senior scientist in UW-Madison’s Department of Chemistry, has collaborated on 46 Christmas Lectures and designed the automated interactive chemistry demonstrations that have been on display at the Chicago Museum of Science and Industry. He has presented science shows in a wide variety of locations, including shopping malls, science museums, school gymnasiums, and at Disney’s Epcot Center.

Bucky Badger has participated in many of Shakhashiri’s Christmas Lectures and public events. He always obeys the rules of safety.

Jim Maynard has led the UW-Madison Chemistry Department’s demonstration lab since 2001. He facilitates exciting, interactive activities to enhance learning for all of the department’s students.

Gery Essenmacher is Associate Dean Emeritus for the UW-Madison College of Letters and Science.

Indre Viskontas is a neuroscientist and operatic soprano who divides her time between the University of San Francisco Department of Psychology and the San Francisco Conservatory of Music.

For more information on Shakhashiri’s efforts to make science exciting and accessible, visit his site, www.scifun.org, or follow on social media:

The 47th Annual Christmas Lecture is made possible through the cooperation and support of: University of Wisconsin-Madison Department of Chemistry Wisconsin Public Television Evjue Foundation Donors to the Shakhashiri Science Education Fund.