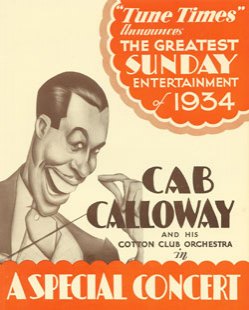 I was lucky enough to round out my work week Friday with an advance viewing of the new documentary on the musical career of Cab Calloway. The film is deluged with archival performance footage of “The Hi De Ho Man” and his big band. Between all the concert footage, Calloway’s peers share stories that give you perspective on what it was like to perform with a man so full of original sounds and moves. But don’t expect to be talked at for too long. This film is about the music, which will have you bouncin’ around in your chair. From his 1930s residency at the Cotton Club, through his several late resurgences back to the mainstream – including a 1980 recording with the Blues Brothers Band – this film truly lets you experience the unique sights and sounds of Cab Calloway, an American Master. As a side, the film does leave out Calloway’s 1977 Sesame Street appearance, though the film’s website mentions it. If you really want to see it… I assure you it’s out there somewhere. (Hint: YouTube)