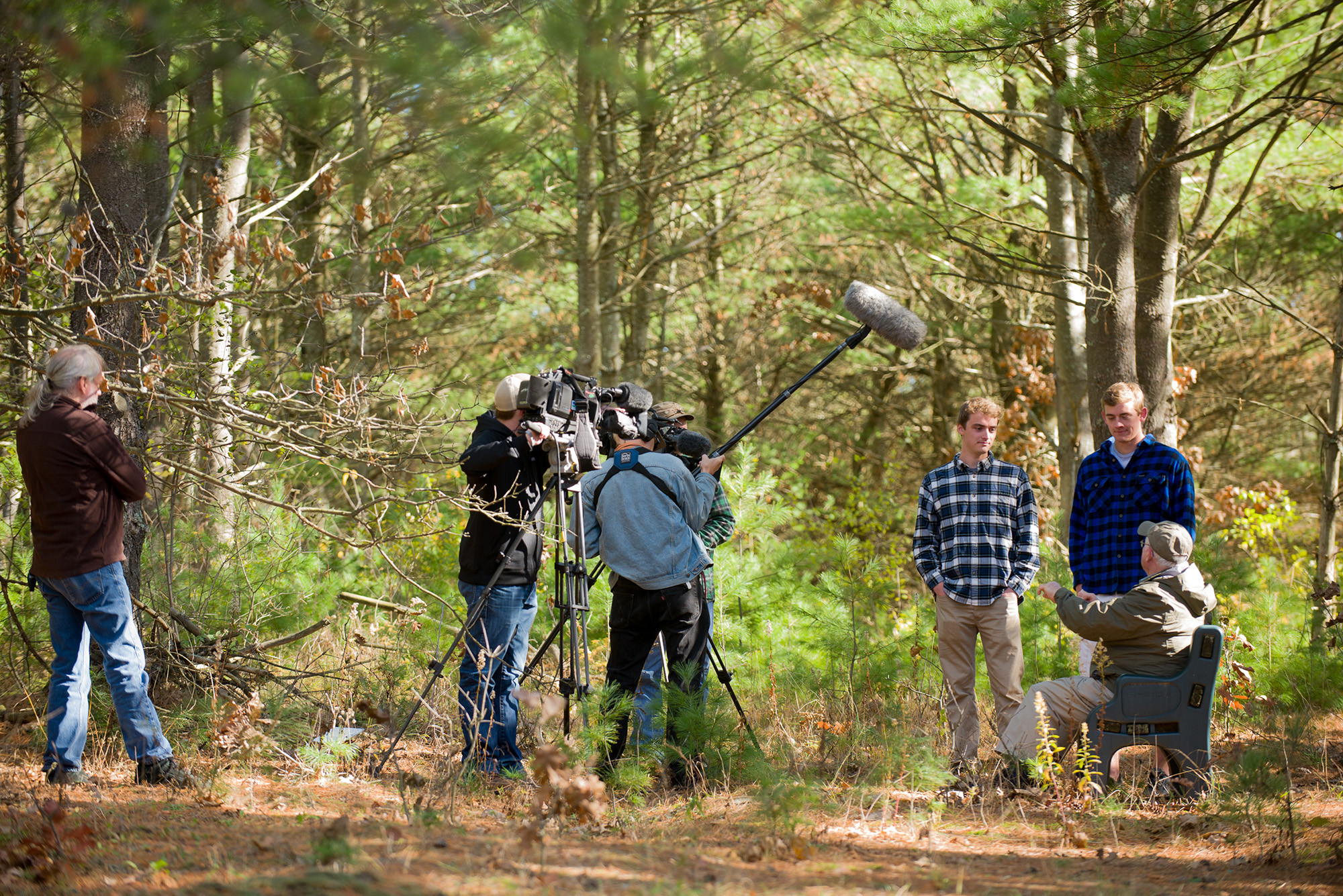 Behind the Scenes – “Jerry Apps: Never Curse the Rain”

Over the past five years, WPT producer Mik Derks has been sharing the stories of beloved Wisconsin author, historian and storyteller Jerry Apps with television audiences. This month, the tradition continues with a new documentary: Jerry Apps: Never Curse the Rain. Reflecting on water’s importance throughout his life, Apps shares why his father told him, “Jerry, never curse the rain.”

We sat down with Derks to discuss what it’s been like to work with Apps throughout the years and what sets Jerry Apps: Never Curse the Rain apart from previous projects.

Derks first met Apps in late 2012. Ever since, the pair have been collaborating to bring Apps’ stories and wisdom to audiences. “WPT had been wanting to do a project with him for years,” explains Derks. “He had appeared in various documentaries but we wanted to do something that starred Apps.”

Derks, recognizing Apps’ ability to tell a captivating story without a retake, immediately knew how to proceed. Derks said: “If I’m going to do a program with him, I’m just going to let him tell stories.” That concept was a bit of a stretch at the time; the format was unfamiliar. But the response to the program spoke for itself.

“The response to any Jerry Apps program is people nodding their heads in agreement throughout,” says Derks. “Then, they start telling their stories.”

The success of that very first documentary, Jerry Apps: A Farm Story, which was picked up by PBS and received national coverage, set the stage for a collaborative relationship between Apps and WPT for years to come.

Jerry Apps: Never Curse the Rain is the fourth project Derks has completed with Apps. This project differs from previous projects, in that it travels with Apps throughout his whole life, from child to “old timer.” The documentary shows how water impacted every aspect of Apps’ life, continuing to be a source of tranquility.

Readers might not be surprised to learn that working with Apps is a joy. “It’s always fun working with Jerry,” says Derks. “The stories are just waiting to come pouring out, and he tells them so well.” Derks also loves seeing Apps interact with the public at screenings and events throughout the state. “Attendees are seeing their own childhood and their own memories. He gave permission to his audiences to remember their childhoods fondly.”

Are there facts about Apps that viewers might be surprised to learn? Maybe, but generally, the Apps we see on screen is the real deal: “He’s so homespun; he’s so real,” says Derks. However, there are talents that Apps possesses that we might not see on screen. “He was a university professor, teaching philosophy and writing. He has written over 30 books.”

While we’re on the subject of books, Derks revealed a behind-the-scenes secret that further illuminates how wonderful the Apps family is: Ruth, Jerry’s wife, handcrafts miniature ornament replicas of all of Jerry’s books! The ornaments adorn the family tree every year.

Audiences aren’t the only ones who can learn from Apps; Derks himself has learned from him over the years, too. Derks says he has appreciated learning about the world Apps grew up in. “You look back and you think about your parents or aunts and uncles who had a similar upbringing, and you understand,” says Derks. “He puts you in that world.”

Derks loves to see how kids react to Apps’ stories. He notes that while Apps’ upbringing is foreign to today’s kids – “How did you watch TV?!” – they respond to his honesty and storytelling talent. “If you haven’t experienced his world, or even talked to anyone who has, Apps really creates the world [through his stories] so you can picture it and understand it.”

Working with Apps is a laughter-filled experience for all involved. One of Derks’ funniest memories from a shoot is an exchange that occurred during filming for A Farm Winter With Jerry Apps. “The cameras were rolling and Jerry was talking about his dad’s attitudes toward land and nature,” says Derks. “Then, Jerry says: ‘In fact, I just signed a contract to write a book about that titled Whispers and Shadows: A Naturalist’s Memoir.'” In a moment of levity, Derks shrugged: “Well, now I guess we have to do that show, too!” and the entire crew cracked up.

Thank you, Jerry Apps, for sharing your stories with us!

Now that you’ve gone behind the scenes, be sure to watch the final product! Jerry Apps: Never Curse the Rain premieres 7 p.m. Wednesday, March 8.