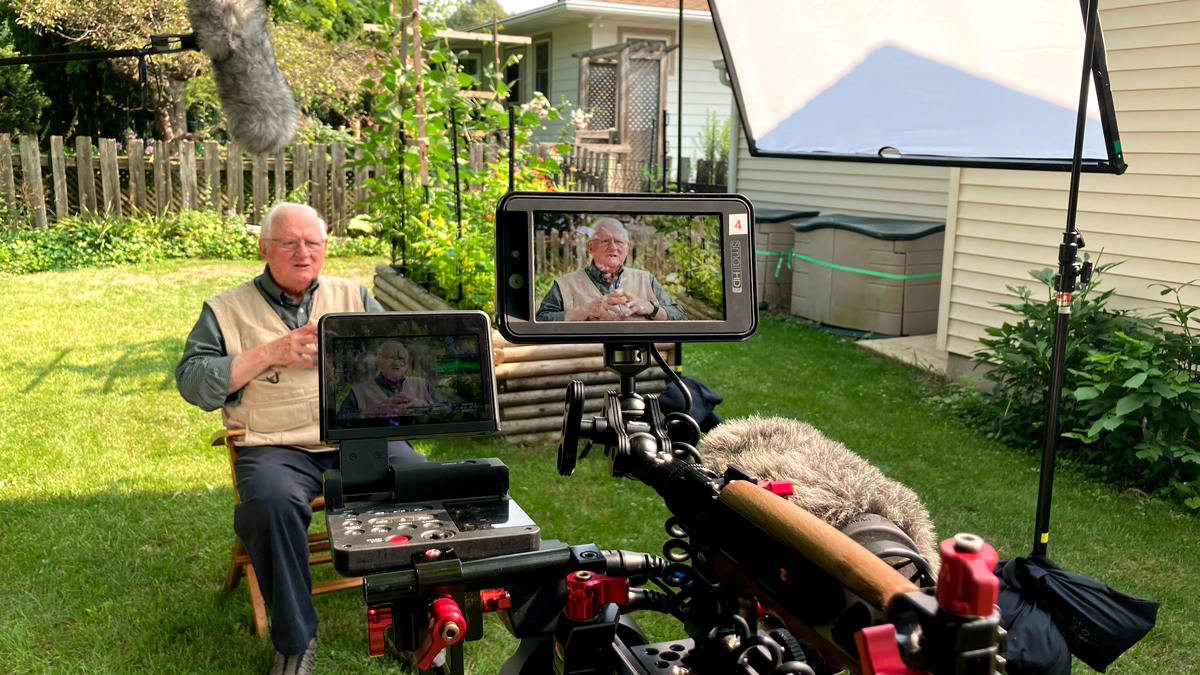 Premiering 7 p.m. Monday, Nov. 28, Jerry Apps Food & Memories celebrates the ways in which food brings us together and connects us to our past.

In this all-new PBS Wisconsin special, beloved Wisconsin author and historian Jerry Apps will share childhood stories through food his mother, Eleanor, painstakingly prepared for the family. He is joined by his daughter, author and educator Susan Apps-Bodilly, with whom he co-wrote the accompanying book, “Old Farm Country Cookbook: Recipes, Menus, and Memories.”

Before the television premiere, take a look behind the scenes with producer Mary Pokorney-Donelan, who shares some stories about making Jerry Apps Food & Memories here: 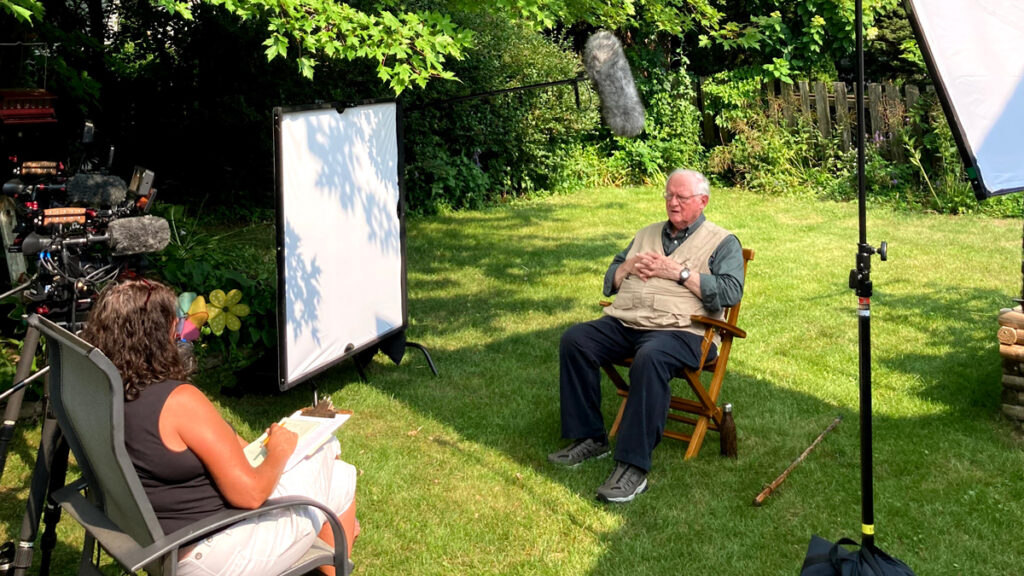 I’d never give them the questions ahead of time. But we needed a way to open the show. We needed a way for Jerry just to talk about his mom. And so that was the one thing he knew was coming: “Tell me who your mom was, where she grew up.” He might have written some notes, but a lot of it he just ad-libbed.

He did write one thing down, and it was in this interview. He wrote down all of the things his mom would preserve before winter by canning, and it was just this list that he read off of. 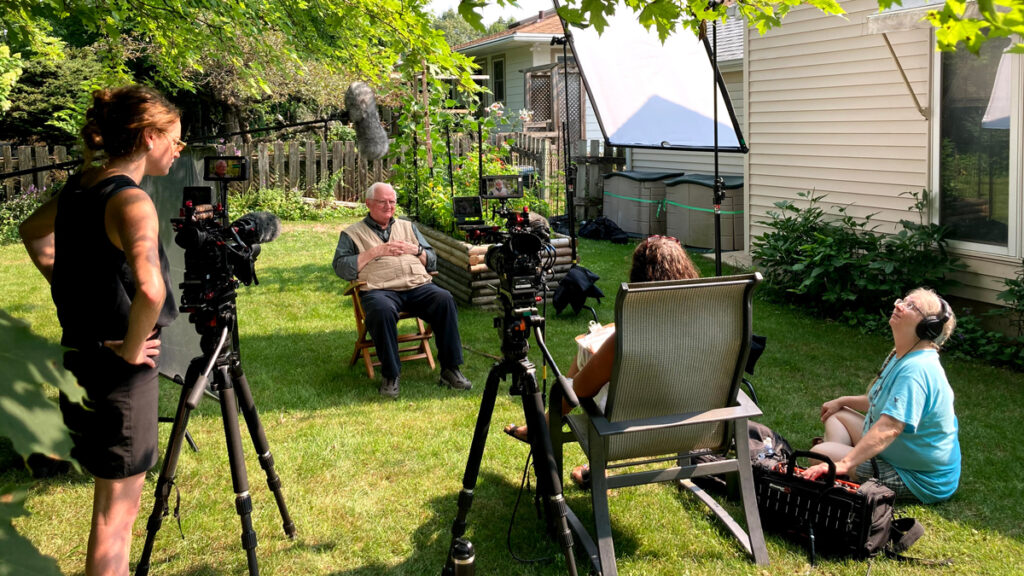 This is from the first interview we did with Jerry, in his backyard. That big white screen was blocking the sun, which was coming over the roof. We had to keep moving it as time passed to keep Jerry shaded.

That’s me holding the clipboard. I like spontaneity in interviews because it sounds more natural and it helps me to listen to what they’re saying, which elicits another follow up or question. At the end of my interviews, I always ask the audio engineers and videographers, “What did I miss?” or, “What did you want to ask that I didn’t ask?” And a lot of times they have some great questions. 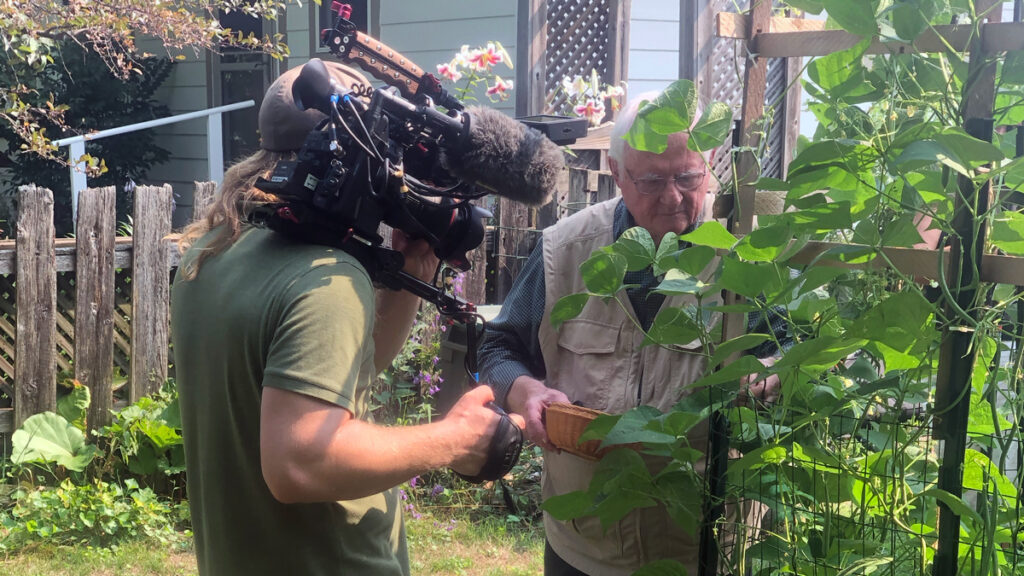 These are all new stories, and I think adding Susie brought it to a different level, and it was great to hear her stories as well. There are stories that Jerry had kind of forgotten about or that Susie had never heard. And that’s the whole premise of the show: Food evokes these memories.

There’s some really raw, honest moments. Some things didn’t make it onto the show that he teared up about as he talked about them. I wanted to use those moments, but sometimes it just didn’t work out. But those are the moments. When he’s talking with Susan, he’s genuinely laughing at stuff. Those are the moments I love. He’s honestly remembering these things and enjoying the memories. 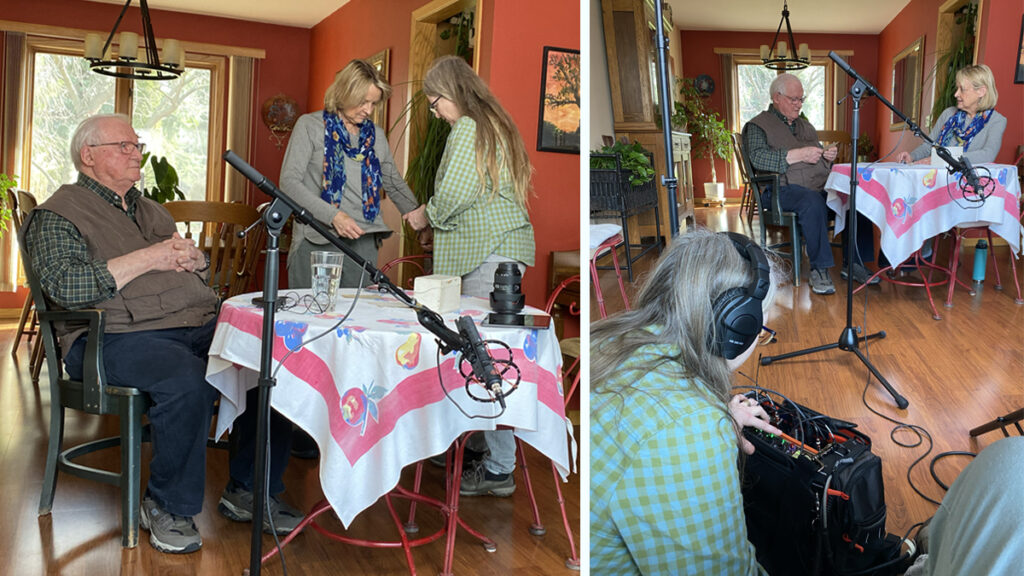 Inga helped everyone with their lapel mics for interviews. Plus we had a natural sound mic, or a “nat mic,” for background. When we were in the garden to record Jerry’s interview and someone was mowing their lawn like a block over, someone had to go walk over there to ask them to stop until we were finished.

The sound crew always has their headphones so they can hear anything. If a truck, or like an airplane or ambulance goes by they just tell us, “Stop, I’m getting some background noise.”

Other times when interviewees are talking and making a point, if they hit their mic, Inga says, “Hey, have them do that again.” So we will have them repeat what they said if something like that happens. 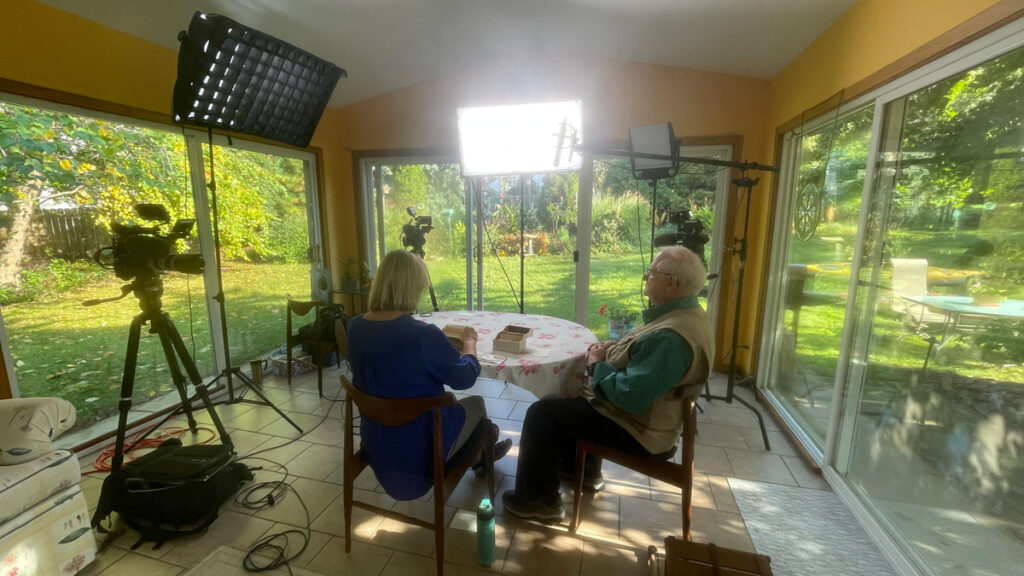 This is the very first group interview we did with these two, and it’s in Susie’s sun porch. It was a little bit tricky because, as you can see, there are windows on three sides. So it was interesting trying to find the right angle with the light and the reflection. 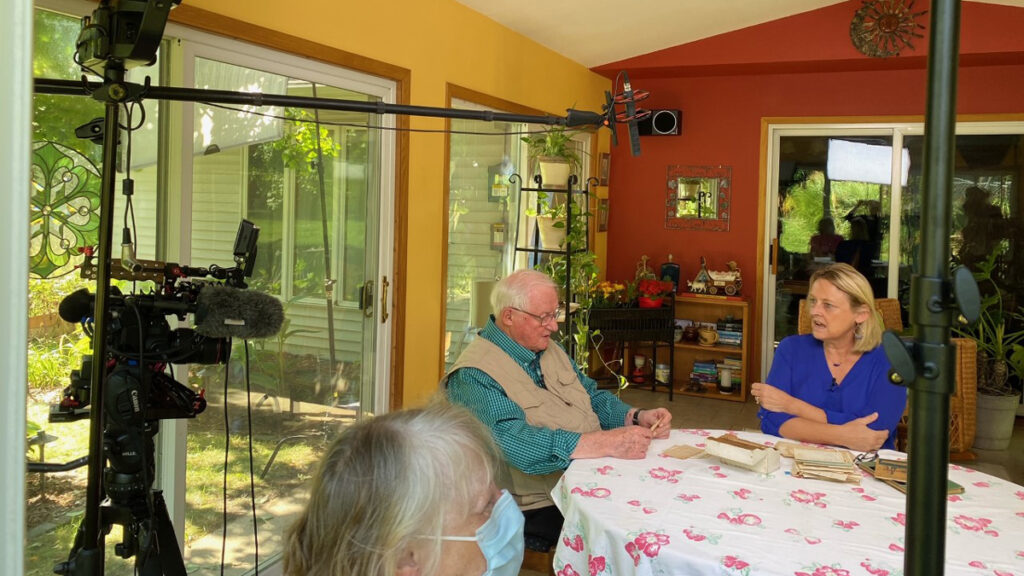 We actually set up lights outside as well, because if the sunlight changed, we were able to move the lighting as time passed. And it gives us an added light to brighten up the room and it helps us control light glares as well. You can see a diffuser outside, right behind Jerry’s back, which we also used to control outside lighting.

We had two days in October when we recorded at Schumacher Farm, which has this old farmhouse with an actual working, wood burning stove. It was a nice tie into how his mom would have cooked. A volunteer at the farm started it for us, and we got great video.

But it was so humid that day, the chimney wasn’t drawing up the smoke well enough, so it got really smoky in there, and the fire department came. The Farm is considered a museum, so a sensor went off, and they just showed up. 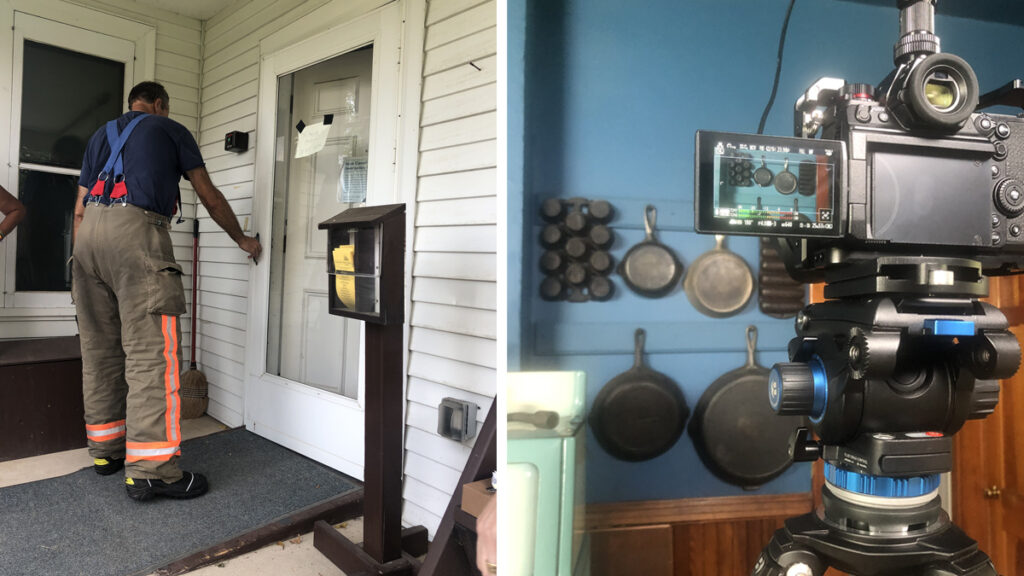 The fire department checking in and the crew gathering B-roll at Schumacher Farm.

It was kind of humorous. We were just trying to get some footage of the stove and it ends up with the fire department showing up. It probably only put us back about twenty minutes. We got the draw finally, and it went well. Susie cooked some eggs and bacon on that stove. 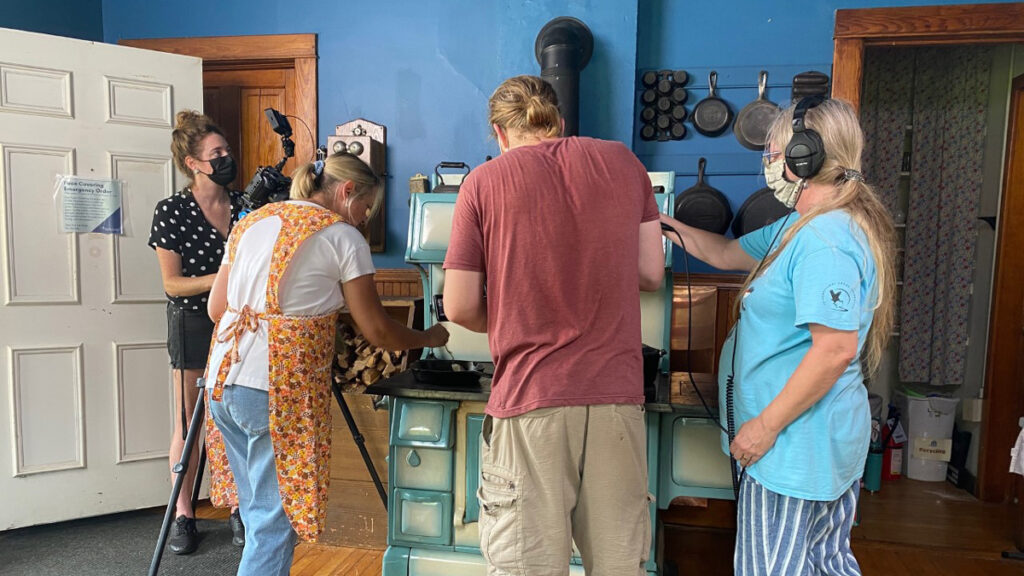 Then we used the inside of the oven for some staging, and Susie made sorghum cookies. There was a sugar shortage during the depression, and so that (sorghum) was their sugar source. Susie chose what to make, brought the ingredients, mixed it up and then she brought out the batch that had already been made. So she prepared the cookies on the sheet pan, put it in the oven and closed it and the camera cut. Then when we rolled again, she pulled out the swap, “They’re all done!”

A fisheye view of the kitchen at Schumacher Farm.

Someone took this photo with a fisheye, and it makes the space look larger than it actually is. It was pretty tight. It was a challenge to find multiple backgrounds for interviews in this small room, and we ended up getting four angles. The different angles give you a sense that you are moving around the space, and it adds visuals, as opposed to just the same background all the time.

When we did pick up interviews, we purposely made sure that we went in a completely different setting so it wouldn’t look mismatched. This way we don’t have to worry that Susie had the same shirt on, or her hair looks the same or Jerry’s shirt sleeve is rolled up the same way. Different locations prevent us from trying to recreate the scene.

We staged various scenes for the title headings of each chapter in “Food & Memories.” This is my antique table that I brought in from home, and we used props from the UW-Madison theater department and I brought some props in as well. And then I actually had emailed the whole staff at PBS Wisconsin saying, “Hey, I need antique cookware.” Within an hour, I had everything I needed which was great. I love including people from the station. 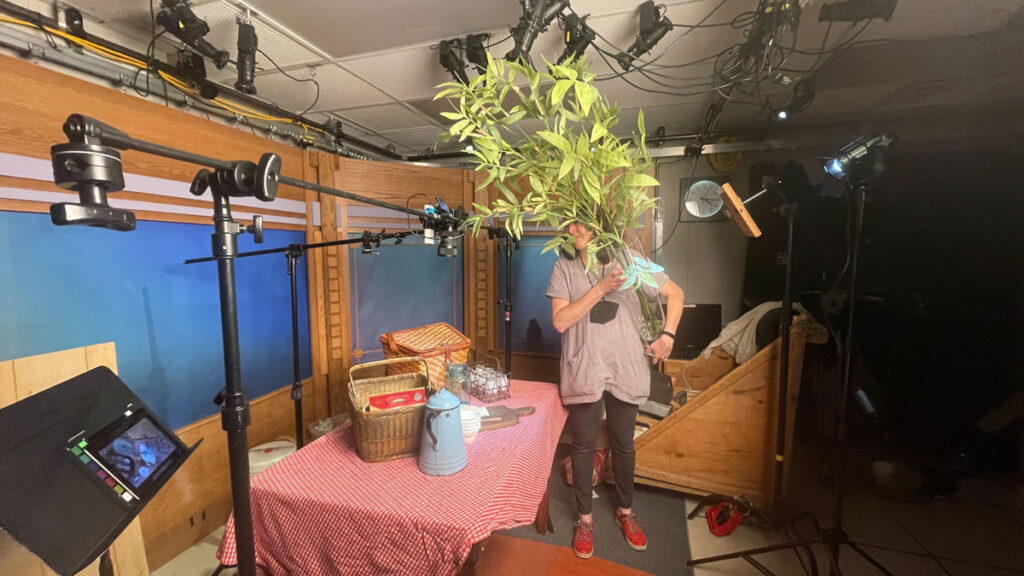 Jen Hadley led the art direction and did a great job. If the title of the segment was “Baking on the Farm,” she then created the table scene so it looked like someone was baking. Here she’s trying to add shadows. And if you look over to the left, there’s an iPad that shows what the cameras looking down are capturing. So the crew can see the effect those leaves add when they get in front of the lights a little bit. 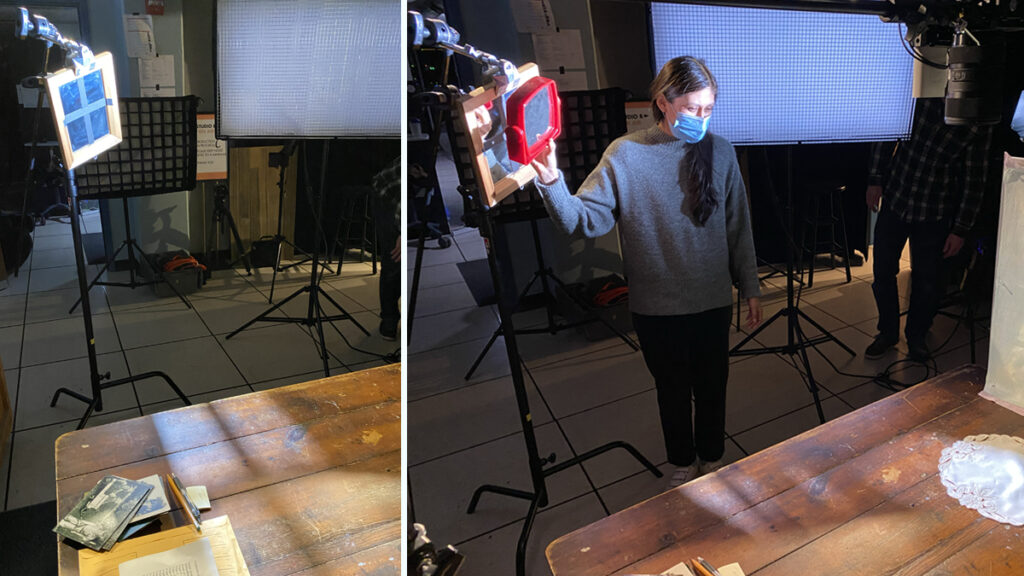 Here is a cool lightning effect that our videographers use: The tape on that mirror gives the look on the table like light coming through a window. It takes a while to set up a light configuration. I booked an entire week in our studio so they had the plenty of time to be creative with lights and settings. It probably took Jen, Alma and James half a day, a couple of hours to figure it out, and then they would mess around and change it. They’re all super talented. 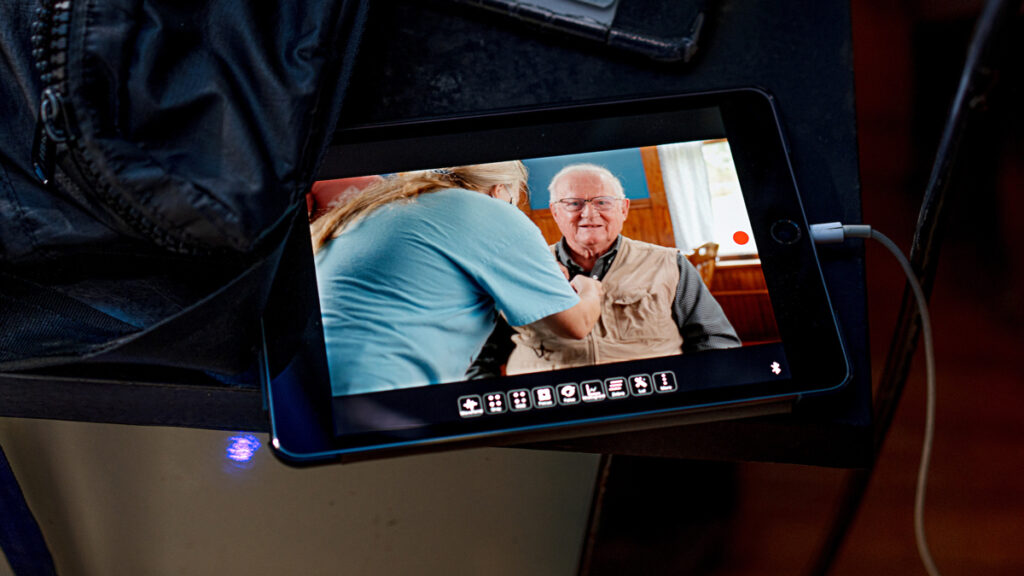 This was my first time working with Jerry. It was very important for him that we convey that food brought people together. Food was more than just food. It was something that people would gather around and talk about. So he brought that up a lot.

I ran the show by Jerry and Susie, and there’s a segment on threshing, which is harvesting at the end of the year, and I had used two photos that featured the wrong machine. So he made sure I had the correct one, and I was grateful for that. But Jerry and Susie were so easy to work with. Wonderful people.

Made in Wisconsin Behind the Scenes Jerry Apps

5 thoughts on “Behind the scenes: ‘Jerry Apps Food & Memories’”