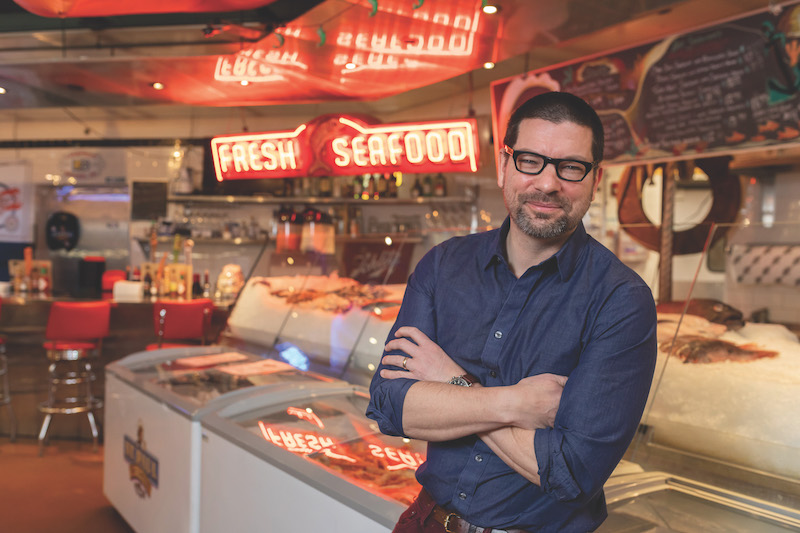 Wisconsin Foodie captures the flavor of our state – one bite at a time! An all-new season airs 7:30 p.m. Thursdays on Wisconsin Public Television.

Since the show’s inception in 2007, founder and executive producer Arthur Ircink has done just about everything to keep the show running smoothly behind the scenes, from shooting and editing to underwriting and social media.

Read on for his inside take on how Foodie creates a delectable array of offerings for viewers to savor throughout the year.

When the concept for Wisconsin Foodie was “inked on a bar napkin,” according to Ircink’s bio, the hope was to capture the enthusiasm of national food shows and create a show all about the rich local food stories from Wisconsin. By promoting local TV and local food, Wisconsin Foodie connects its viewers with the amazing food stories from their own backyards, hoping to encourage not only eating more local and fresh foods but also supporting a local economy.

In the ten years since, Wisconsin Foodie has evolved from a chef-led orientation to a focus on more of the local flavors and producers who make food special. The crew has traveled throughout Wisconsin’s farms, small towns and large cities, as well as filmed internationally.

“Meeting people and telling their stories is my favorite part of the show,” says Ircink.

ARTHUR IRCINK: From the Driftless Area to Washington Island in Door County, Wisconsin’s stories are endless. I attribute that to our immigrant population, agricultural diversity and Lake Michigan. You could literally mix those things into a pot and add some heat; that’d be the flavor of Wisconsin.

We owe a lot to our European ancestors for bringing their cultural heritage and culinary arts of sausage, cheese and beer making – not to mention their influence on our agriculture. You show me another state that enjoys sauerkraut, bratwurst and limburger as much as we do.

Down the road, I’d like to tell the story of our Hmong population and their agricultural/cooking background.

What’s the most common question you receive?

Often, it’s “What’s your favorite restaurant?” That’s a tough one. I don’t play favorites, but I do like particular places for certain dishes or people.

Over the years, chefs have really gotten me interested in the food producers behind their dishes. For instance, one of the best things I’ve ever eaten is a freshly salted cheese curd hot out of the vat. It’s fun to break down a meal and discover all the stories on your plate.

Secretly, though, I lean more toward hole-in-the-wall kinds of places, rather than traditional fine dining (although I like those, too!). Honestly, my favorite restaurant is my own kitchen, eating with my family.

Fans also ask what it’s like working with Kyle Cherek. Kyle is an absolute professional; I can’t give him enough credit. He has really put time and dedication into developing his character over the years. His ability to improvise a scene on the spot is incredible. Basically, he always answers the phone when I call for a shoot.

What Wisconsin Foodie destinations have surprised you the most?

The first places that come to mind are related to all of the international travel we’ve done, connecting stories from abroad to back here in Wisconsin.

For instance, we travelled with coffee roaster Alterra (now Colectivo) to a volcano in Guatemala to source beans. We went to Munich with Hans Weissgerber to tell the story of biergartens, then came back to Milwaukee. And we went to Spain with the Bell sisters to see how the Spanish do cheese and meat.

What new or notable moments can viewers look forward to this season?

We’ve added Jessica Bell and Chef Luke Zahm as on-camera talent. Both of them bring unique voices to the screen and different perspectives to food and drink in Wisconsin.

What kinds of moments don’t make it into the final shows?

It’s too bad the audience doesn’t get to see behind the scenes, because it’s entertainment gold! Producing Wisconsin Foodie is fun, real fun; that’s our goal, first and foremost. I feel like our energy as a crew comes through in the final product. The core crew of Ryan Sarnowski, Nelson Schneider and Dan Peters is a show in itself. Maybe we’ll do a YouTube show of behind the scenes Foodie.

WHAT’S ON THE TABLE THIS SEASON?

New co-hosts Jessica Bell and Chef Luke Dahm join Kyle Cherek to explore everything from a turkey hunt and Korean-inspired whole-bird cooking to the many benefits of American ginseng.

Meet award-winning chef Tory Miller at Sujeo, his Korean-inspired restaurant in Madison. Host Kyle Cherek and Chef Tory Miller head to the woods with hunting guide Keith Warnke and friends to learn about hunting a turkey for their dinner. Back at Sujeo, Tory prepares a fresh turkey in multiple ways while utilizing the whole bird.

Kyle Cherek meets Chef Joe Muench, co-owner of popular Milwaukee restaurants Blue’s Egg, Maxie’s and Story Hill BKC. Joe takes Kyle on a tour through all three restaurants, sampling dishes along the way. Each restaurant not only focuses on comfort foods but also on sourcing quality ingredients while transforming and expanding Milwaukee’s palate.

Meet Will Hsu of Hsu Ginseng. Ginseng cultivation is both art and industry. Thanks to founder Paul Hsu, this family-run company has helped Wausau become known internationally for its cultivation of American ginseng. Get a behind-the-scenes look at the ginseng world, how it is cultivated, and what makes it so popular.

Celebrate mobile cookery! At the gym, his restaurant, or a farmer’s market, TrueMan McGee of Funky Fresh educates and feeds the community healthy fast-food alternatives like his grilled spring rolls. Next, Jessica Bell heads to a food truck fest at the Blind Horse in Kohler, Wisconsin. There, she samples everything from cowboy fries to gelato to tuna poke.