A Look Ahead with WPT's Director of Programming: Fall 2015 - PBS Wisconsin
Skip to content 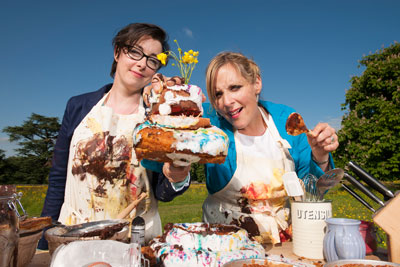 A Look Ahead with WPT’s Director of Programming: Fall 2015

“There are only 21 hours of prime time in the week. We can’t expand time.” – Garry Denny, Director of Programming

The summer is growing short, and as kids get excited about fresh crayon sets, adults anticipate a new broadcast season full of zombies, dragons and political intrigue. I spoke with our director of programing, Garry Denny, to see what exactly goes into crafting a successful fall schedule.

“As with all fall schedules, there’s a great deal of optimism,” Denny says. “We feel like everything we put on the air has a great deal of value to our viewers. Having said that, there’s a certain amount of reality that sets in. There’s a lot of competition out there.”

In a whirlwind of fall releases, public media can take a back seat. Network shows take up more airspace, but Denny isn’t bothered by it. While other major networks may have more advertising dollars to spend on paid media, public media relies heavily (and arguably, with great success) on “earned media.”

Positive reviews and a strong social media presence all help quality shows rise to the top, which means that fall schedules are crafted with special care. In Denny’s words, “a lot goes into the cauldron” putting together a schedule that will garner enough positive attention to outweigh massive advertising campaigns from other networks.

“We have to look at the incoming PBS schedule for the fall and complement around it,” Denny says. “We’re starting a new mystery called Whitechapel, which is a very gritty, modern and in-your-face kind of mystery. We have to look for things that match our station’s personality, and I also want to include things that people don’t expect.”

The decision-making process is rewarding, but it is deliberative, slow and sometimes daunting. Each year there are shows that need to be left out or pushed to different time slots.

“There were some hard calls this season,” Denny says. “The Great British Baking Show bugged me for a month. The first season was on Sunday at 7 p.m., which is prime time for us. When PBS put the new season into the fall schedule, they moved it to 6 p.m. I tried like hell to put it in prime time. I tried every combination I could think of, but ultimately I just had to say, ‘ok – Sundays at 6 it is.’ So it’s not in prime time, but it’s close (laughs). That was pretty agonizing.”

After months of work, here are a few of the shows Denny is especially excited about (keep reading for previews and clips!):


I’ll Have What Phil Is Having
I would like to see this show do well because it’s a unique concept for us. (WPT Director of Television) Jon Miskowski is fond of calling PBS the humor-impaired network, which is basically true because a lot of things we’ve tried have simply tanked. So I hope it does well, because Phil Rosenthal is a great personality and the show is very funny; it’s very clever. There are only six episodes, and if it does moderately well, then I think we can expect another season.
Gorongosa Park: Rebirth of Paradise
I would like Gorongosa Park to do well, not just because of all the real estate it takes up in the schedule on Tuesdays, but because it’s such a great show. It’s so beautiful. It’s such a great park that they really have brought back from the brink of disaster. This park was just going to go away, but the local government and conservationists pulled together to bring it back to life.
Indian Summers
We obviously need Indian Summers to do well, because we need a replacement for Downton Abbey (laughs). I wish there were obvious building blocks to making a hit like Downton Abbey, but this is a nice drama. It’s lush; it takes place in India. It’s got a lot of drama, intrigue, love, romance and sex in it, so I think it has all the components to do well, but we’ll see.
Walt Disney: American Experience
It’s not just Walt Disney and the great films that came out of Walt Disney. It’s about his life, which wasn’t always neat and clean and happy. He was a difficult man to work for. He was a difficult man to be married to. He was a difficult man to have as a father. The documentary doesn’t shy away from those things at all, so I think it’s a really nice, completely rounded documentary about somebody who is quite a part of Americana.
American Masters & American Experience
American Masters: Althea Gibson is about this great African American tennis player who very few people know about. I’m excited about that, and the new American Experiences coming up like “The Pilgrims,” from Rick Burns. Yeah – he’s Ken Burns’ brother…can you imagine those household conversations sometimes?”

Frontline
The thing that always surprises me about Frontline is that no matter what the topic is, if I start watching I want to see the whole thing. That’s a testament to how great that show is. There are a lot of great titles this season, including a three-part series called My Brother’s Bomber about the guy investigating the bombs that brought down the Pan Am flight in 1988. They’re also doing a two-hour special on immigration reform. They’re continuing to tackle topics that are important to our viewers, and that are important to us as people.

Nature
There are a lot of great Nature episodes coming up. There’s a two-part series about house pets and another one that I’m really looking forward to called “The Soul of the Elephant,” which looks beautiful. In a time where this beautiful African lion is killed by a dentist, I think it’s great that we have a show like Nature on the air. It shows the beauty, care and conservation of wildlife instead of its destruction.

2 thoughts on “A Look Ahead with WPT’s Director of Programming: Fall 2015”