Former Republican Gov. Scott Walker appointed Fred Prehn to the Wisconsin Natural Resources Board in 2015 and his term expired in May 2021, but he has refused to step down because the Republican-controlled Senate hasn't confirmed current Democratic Gov. Tony Evers' appointee. 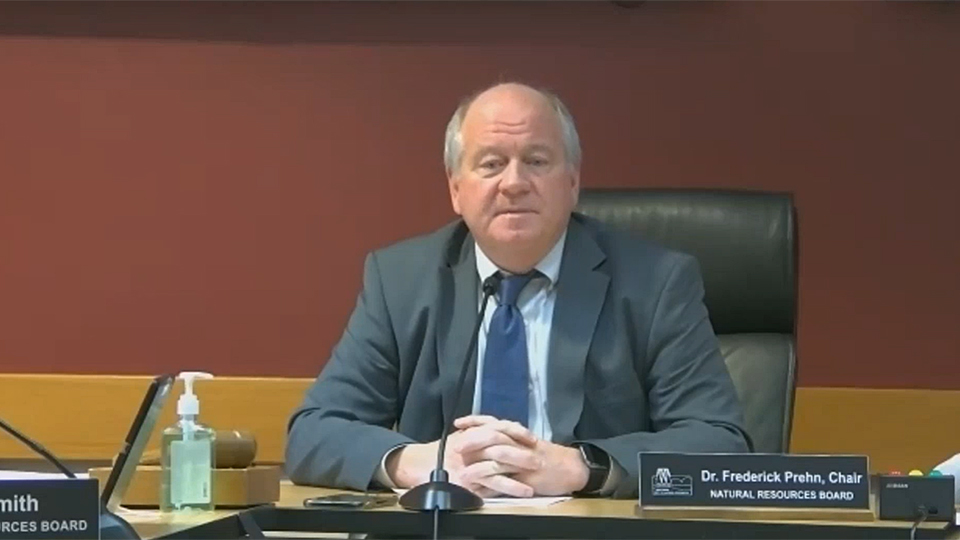 Fred Prehn served as chair of the Natural Resources Board past the May 2021 expiration of his gubernatorial appointment until the board elected a new chair in January 2022. This image shows Prehn during a Dec. 8, 2021 meeting of the board. (Credit: Wisconsin Department of Natural Resources)

MADISON, Wis. (AP) — Wisconsin's conservative-controlled Supreme Court ruled June 29 that a conservative member of the Department of Natural Resources policy board may remain on the panel indefinitely in a far-reaching decision that leaves Democratic Gov. Tony Evers all but powerless to seat any of his appointees who need legislative approval.

The court ruled 4-3 that Fred Prehn can stay until the state Senate confirms his successor. Prehn's term expired more than a year ago, but the Republican-controlled Senate has declined to hold a confirmation vote on his replacement.

That has effectively blocked Evers from filling a seat and preserved a conservative majority on a board that controls environmental and hunting policy in Wisconsin. Since his term expired, Prehn has voted with that majority to scale back restrictions against PFAS — an abbreviation for perfluoroalkyl and polyfluoroalkyl substances, also known as "forever chemicals" — and increase a quota for a fall wolf season.

The majority found that the governor may appoint an officer and the Senate may confirm that person only if a vacancy in the office exists. A vacancy can occur only if the officeholder dies, resigns or is removed, the majority concluded. Therefore, the justices said, Prehn still holds the position and the governor can remove him only for misconduct or malfeasance in office.

"Prehn lawfully retains his position on the DNR board as a holdover," Chief Justice Annette Ziegler wrote for the majority. "Therefore, the Governor cannot make a provisional appointment to replace Prehn under (state law)."

The decision means gubernatorial appointees can hold their positions indefinitely pending Senate confirmation of a successor — thus handing the Senate the power to block appointees by a governor of the opposite party.

"The majority’s decision ... steers our state's government directly into disorder and chaos, threatening the fragile separation of powers central to its functions," Dallet wrote.

Evers said in a statement that appointees should be considered on merit regardless of whether a Democratic or Republican governor chose them.

"Today's decision continues to underscore the erosion of democratic institutions at the hands of Republicans in this state," he said. "It's wrongheaded, its shortsighted, and it's politics at its most dangerous."

Prehn was appointed by Evers' predecessor, GOP Gov. Scott Walker. Conservatives can count on controlling the Department of Natural Resources board until at least May 2023, when the terms of three other Walker appointees will end. If Republicans maintain their majority in the Senate in November's elections, as expected, they likely won’t vote on those appointees' successors and conservative control will continue.

Walker appointed Prehn, a Wausau dentist, to the board in 2015. Prehn's six-year term ended May 1, 2021. Evers appointed Sandra Naas to replace him, but Prehn refused to step aside. He argued that the state Supreme Court ruled in 1964 that gubernatorial appointees don't have to resign until the Senate confirms successors.

Democratic Attorney General Josh Kaul sued in August 2021 to force Prehn off the board. Dane County Circuit Judge Valerie Bailey-Rihn sided with Prehn in September and dismissed the case. Kaul asked the state Supreme Court to take the case directly without waiting for an appellate ruling.

Kaul said Wednesday that the decision sets a "terrible" precedent.

"It's going to cause chaos because you're going to see appointees try to hold on indefinitely," he said. "This won't be limited to Fred Prehn."

Prehn said in a statement that he intends to stay on the board until the Senate confirms his successor. He accused Kaul and Evers' administration of wasting money on legal fees for a "political stunt to satisfy their liberal donor base."

Midwest Environmental Advocates, an environmental law firm, obtained Prehn emails through an open records request that show he consulted with Republican lawmakers and lobbyists about staying on the board.