The federal lawsuit follows a Wisconsin Supreme Court ruling that prohibits absentee ballot drop boxes and only the voter can return their absentee ballot in person to a clerk's office or a designated site. 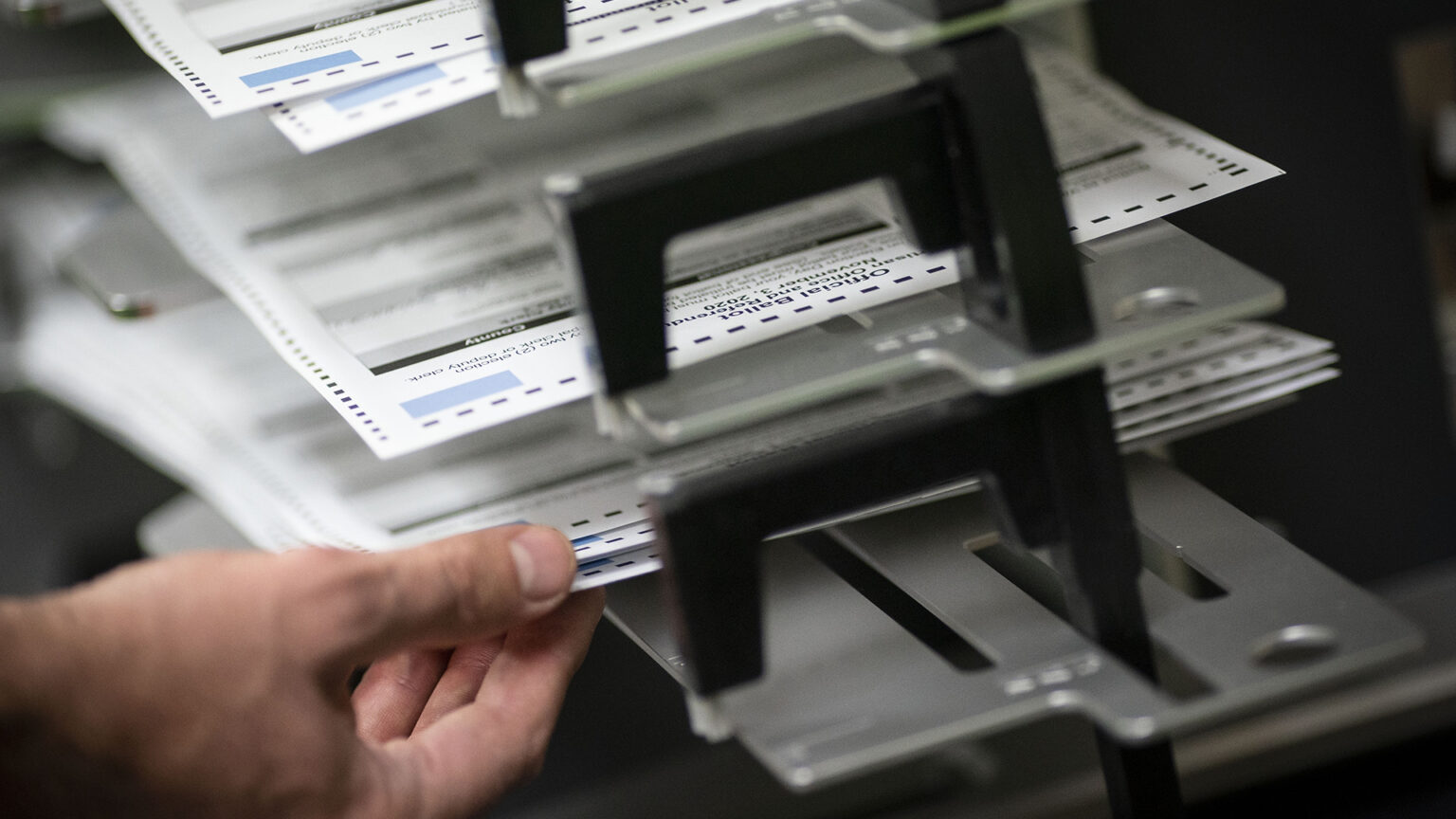 Poll workers sort out early and absentee ballots at the Kenosha Municipal Building on Nov. 3, 2020, in Kenosha. A federal lawsuit filed on July 22, 2022, by people with disabilities in Wisconsin seeks a court order that those voters are entitled to receiving help returning their ballots, even though the state Supreme Court said no one other than the voter can return absentee ballots in person. (Credit: AP Photo / Wong Maye-E)

MADISON, Wis. (AP) — Four people in Wisconsin with disabilities have filed a lawsuit asking a federal court to ensure that they'll be able to get help turning in their ballots, even though the conservative-controlled state Supreme Court said no one other than the voter can return absentee ballots in person.

The lawsuit, filed July 22 in U.S. District Court in Madison, comes in response to the Wisconsin Supreme Court's 4-3 ruling earlier in the month and comments by Meagan Wolfe, the administrator of the Wisconsin Elections Commission.

The state Supreme Court ruled that absentee ballot drop boxes are illegal and that only the voter can return their absentee ballot in person to the clerk's office or a designated site. The court did not address whether voters can receive assistance when returning their ballots by mail.

Wolfe, when discussing the ruling at a news conference, said "right now, the voter is the one required to mail the ballot." Wolfe was referring to a state law that says that absentee ballot envelopes "shall be mailed by the elector, or delivered in person, to the municipal clerk issuing the ballot or ballots."

Wolfe's comments, taken together with the court's ruling, "delivered a disturbing message to voters with disabilities: ballot-return assistance is prohibited in all circumstances throughout Wisconsin," the lawsuit said.

A spokesman for the Wisconsin Elections Commission didn't immediately respond to a message Monday seeking comment.

The Department of Justice, which typically represents the agency in lawsuits, argued in the case before the Supreme Court that voters may have another person put their absentee ballot in the mail. Attorney General Josh Kaul said in a statement July 25 that that is still DOJ's position.

People with disabilities who brought the lawsuit argue that many Wisconsin residents, including those who have cerebral palsy, muscular dystrophy and are paralyzed, won't be able to vote if they can't get help from someone else to either mail their ballots for them or deliver them in person.

"Plaintiffs are faced with an impossible, and unlawful, choice: abstain from voting altogether or risk that their ballots will be invalidated, or that their only available method to vote absentee (ballot-return assistance) could subject them to prosecution," the lawsuit states. 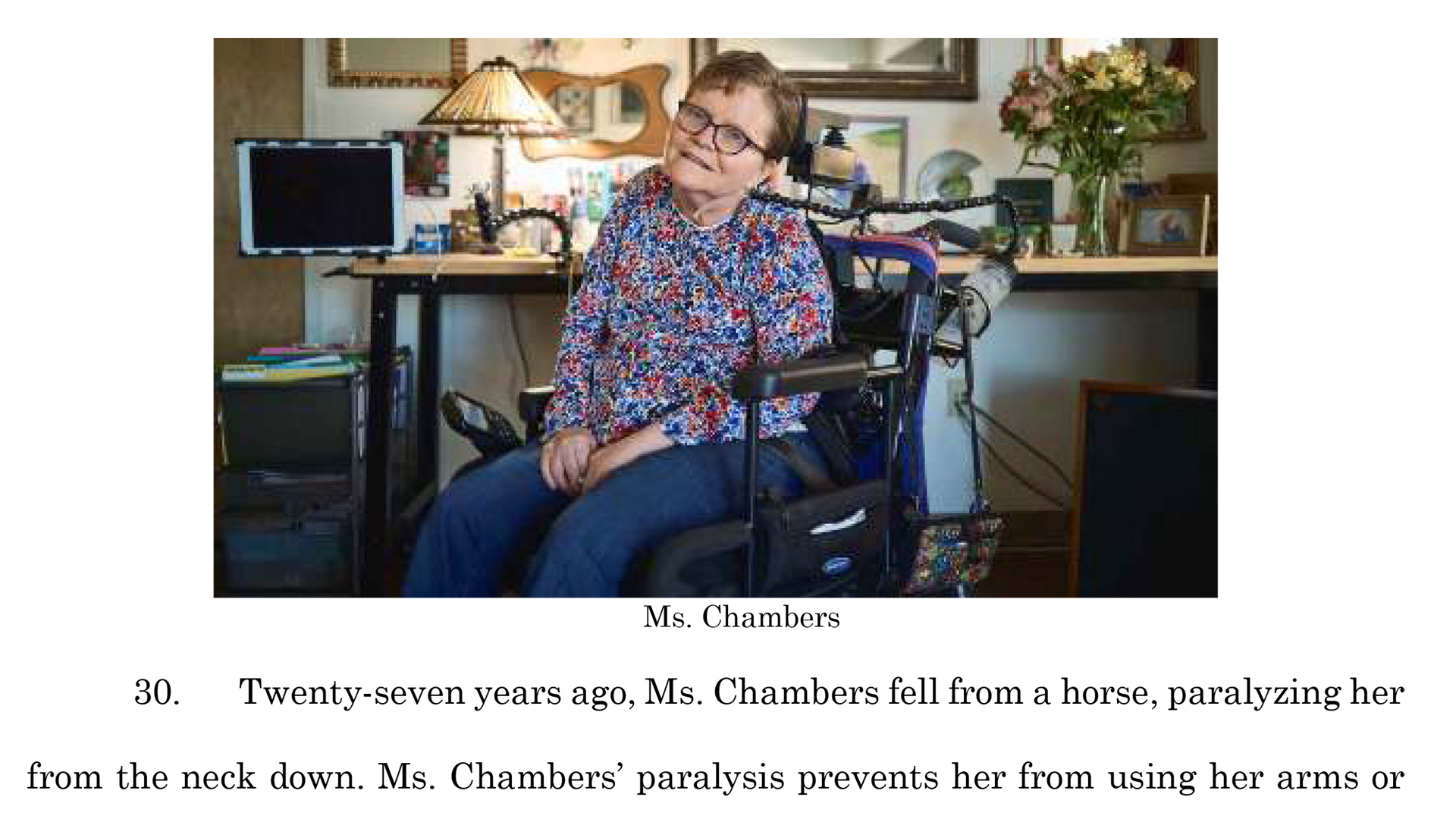 Martha Chambers is one of four plaintiffs in a lawsuit seeking federal assistance with voting following a state Supreme Court decision on how absentee ballots are to be submitted in elections. (Credit: United States District Court for the Western District of Wisconsin)

Four people with disabilities living in Wisconsin brought the lawsuit.

One of them, Timothy Carey, has Duchenne muscular dystrophy, and is unable to move his body and is on a ventilator. The lawsuit said he has always voted absentee with the help of a third party. Another plaintiff, Martha Chambers, is paralyzed from the neck down and always received help returning her absentee ballot since she can't use her arms or legs to place a ballot in the mailbox or return it to the clerk's office.

The plaintiffs allege violations of the First and Fourteenth Amendments as well as several federal laws, including the Voting Rights Act and Americans with Disabilities Act.