Wisconsin's 2022 partisan primary sets up a high-stakes contest for governor that could reshape how elections are conducted in the battleground state, as businessman Tim Michels won the Republican nomination and will take on incumbent Democratic Gov. Tony Evers in the Nov. 8 general election. 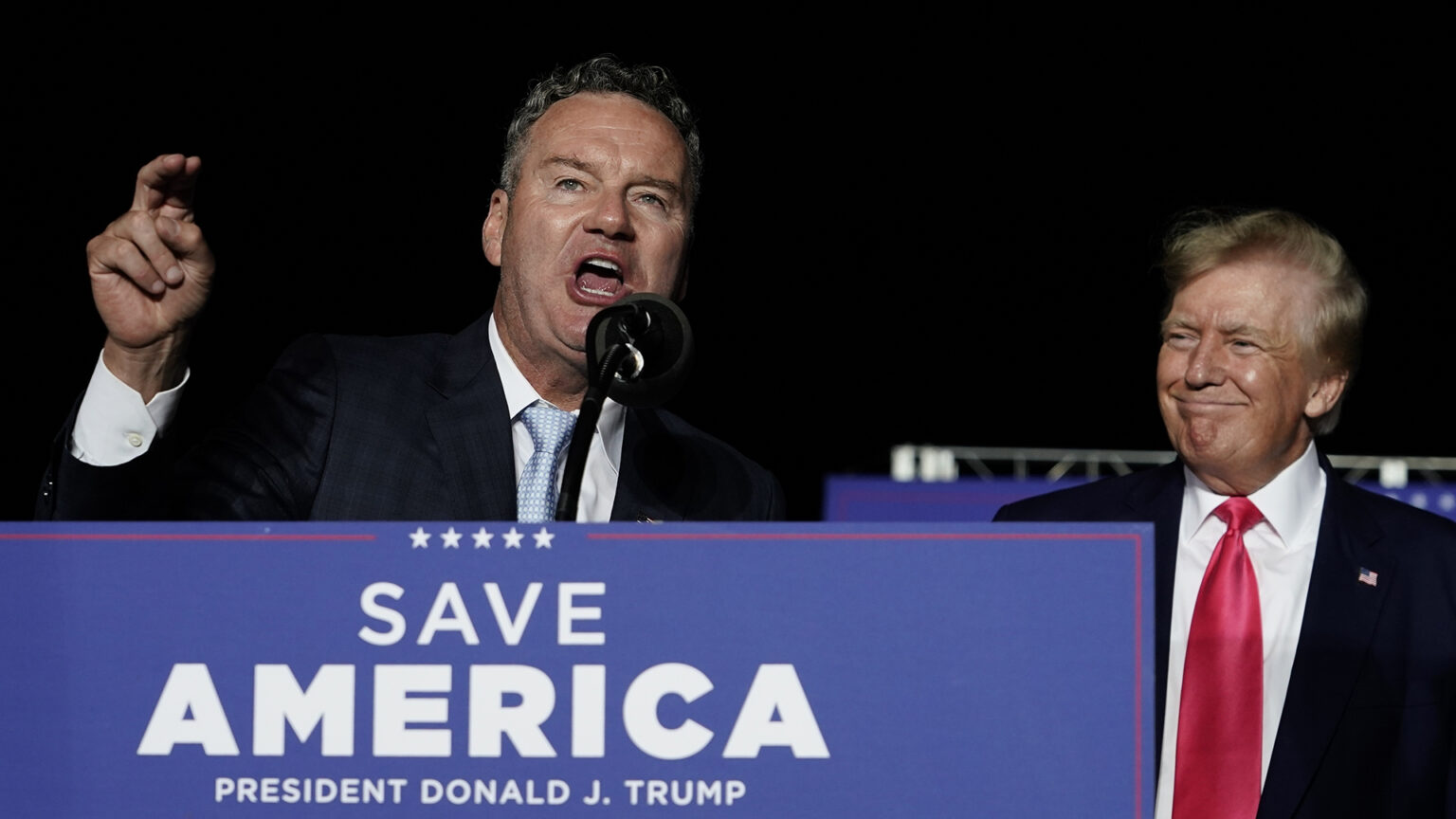 Wisconsin Republican gubernatorial candidate Tim Michels, left, speaks as former President Donald Trump, right, listens at a rally on Aug. 5, 2022, in Waukesha. Michels casts himself as an outsider, although he previously lost a campaign to oust then-U.S. Sen. Russ Feingold in 2004 and has long been a prominent GOP donor. (Credit: AP Photo / Morry Gash, File)

MADISON, Wis. (AP) — Tim Michels, a wealthy businessman endorsed by former President Donald Trump, won the Republican primary for Wisconsin governor on Aug. 9 and will face Democratic Gov. Tony Evers in a contest that could reshape elections in the marquee battleground.

In his victory speech, Michels promised to focus on jobs and the economy and said he would stand up for people who "have been left behind by the Democratic Party that just wants to focus on the social issues."

"As governor, my number one priority is to take care of the hardworking people of Wisconsin," Michels said.

Evers' campaign called Michels "the most extreme and divisive nominee possible, one that will tell Donald Trump anything just to keep his endorsement."

Both Michels and Kleefisch falsely claimed the 2020 presidential election was rigged, a lie Trump has pushed in an effort to overturn his loss to Joe Biden. Federal and state election officials and Trump's own attorney general have said there is no credible evidence the election was tainted. The former president's allegations of fraud were also roundly rejected by courts, including by judges Trump appointed.

Michels said decertifying the results of the 2020 contest was not a priority but said "everything will be on the table." He supports other changes to voting and elections, including dismantling the bipartisan commission that runs Wisconsin elections.

The governor's race was the latest proxy war between Trump and Pence, one-time partners who have backed opposing candidates in other swing states as they try to push the GOP in different directions.

Lt. Gov. Mandela Barnes won the Democratic nomination to face Republican Sen. Ron Johnson, one of Trump's most vocal supporters. The matchup is among the last to be set before the November general election, when control of the currently 50-50 split Senate is up for grabs, and Democrats see Wisconsin as one of their best opportunities to flip a seat.

Wisconsin's most powerful Republican, state Assembly Speaker Robin Vos, held off a Trump-backed challenger. Trump endorsed Adam Steen after Vos rejected the former president's pressure to decertify the 2020 results. Vos said his victory showed "you don't have to be a lapdog to whatever Donald Trump says."

The election's outcomes have far-reaching consequences beyond Wisconsin, a state that is almost evenly split between Republicans and Democrats and where 2022 will be seen as a bellwether for the 2024 presidential race. The person elected governor this fall will be in office for the presidential election and will be able to sign or veto changes to election laws passed by the Republican-controlled Legislature. The next governor and U.S. senator also may sway decisions on issues from abortion to education and taxes.

In Wisconsin, Trump has kept up his pressure campaign to cancel Biden's 2020 victory. Biden won the state by nearly 21,000 votes, four years after Trump narrowly won the state by roughly the same margin. The 2020 outcome has been upheld in two partial recounts, a nonpartisan audit, a review by a conservative law firm and multiple lawsuits.

Evers has made voting and elections a focus of his own campaign, telling voters he's the only candidate who will defend democracy and “we are that close to not having our vote count in the state of Wisconsin."

Both Michels and Kleefisch said overturning the 2020 election results was not a priority. But they said they would dismantle the bipartisan commission that runs Wisconsin elections and would support prohibitions on voters having someone else turn in their absentee ballots, as well as ballot drop boxes located anywhere other than staffed clerk offices.

Michels is co-owner of Wisconsin’s largest construction company and has touted his work to build his family's business. He lost the 2004 Senate race to Democratic Sen. Russ Feingold, and has been a major donor to GOP politicians.

At a rally on Aug. 5, Trump praised Michels as an "incredible success story." He criticized Kleefisch as part of the "failed establishment" and also took aim at Vos. He told supporters that Michels was the better choice to defeat Evers.

Michels pledged that "we are going to have election integrity here in Wisconsin." He also said he will bring "law and order" back to Wisconsin, criticized Evers’ handling of schools and blamed Biden for rising prices.

In her concession speech, Kleefisch said, "The fight now is truly against Tony Evers and the liberals who want to take away our way of life."

Barnes, in his victory speech in Milwaukee, emphasized his middle-class background and upbringing while casting Johnson as "self-serving" and "an out-of-touch politician" who cares only about special interests and wealthy donors.

"It is time for a change, everybody," said Barnes, who would be Wisconsin's first Black senator if elected. "It's time for us to be represented by somebody who shares our experiences."

Johnson called Barnes the "most radical left candidate" Democrats could have chosen.

"This is a contest between radical left socialism versus freedom and prosperity," he said.