Amendments to the legislation would bar municipal governments in Wisconsin from accepting payment at charging stations or selling electricity not purchased from the local utility. 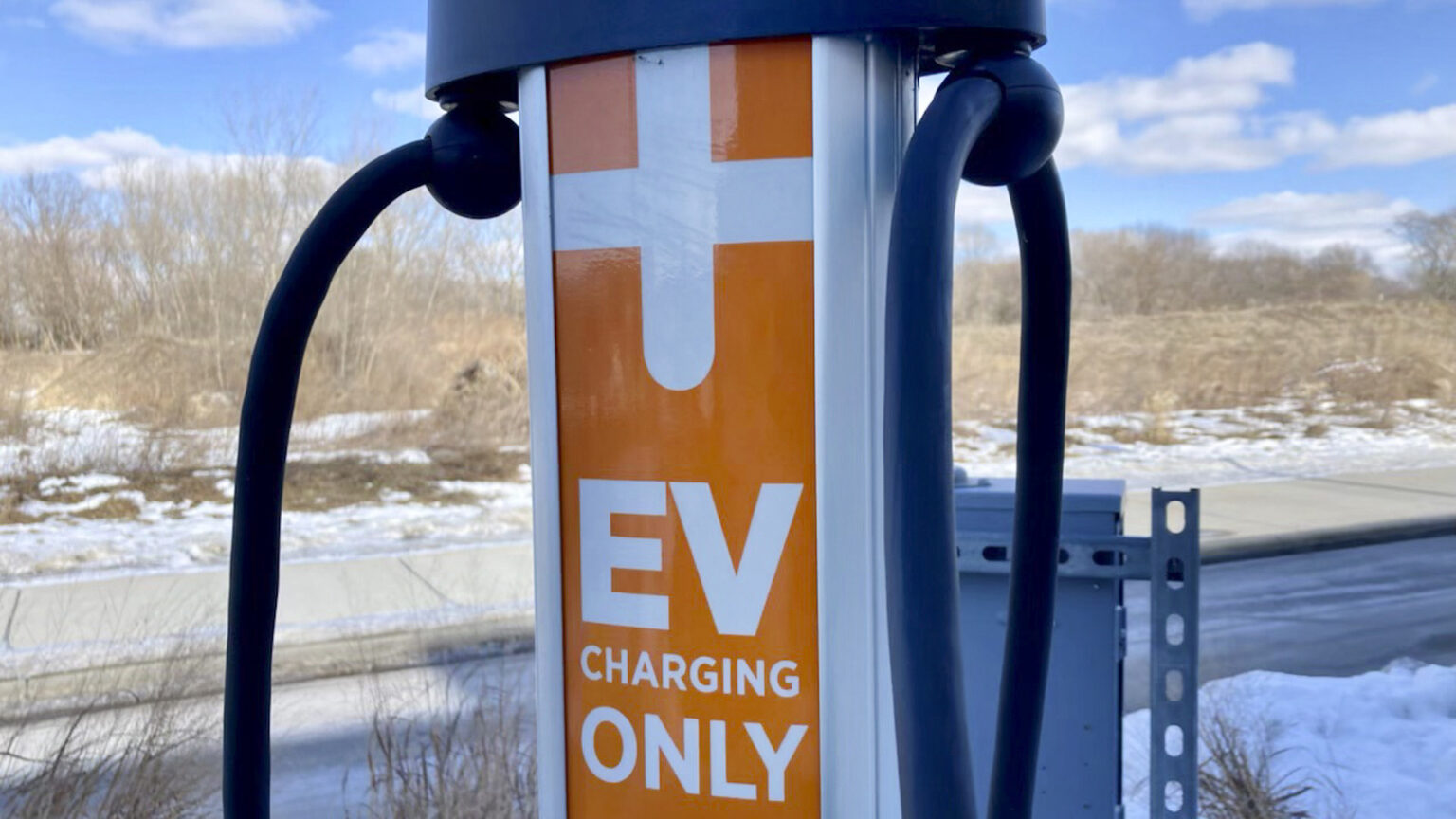 A ChargePoint electric car charging station sits in the parking lot of Garver Feed Mill in Madison on Feb. 12, 2022. As a shift to electric vehicles appears increasingly inevitable, questions loom about who will control and benefit most from the transition. (Credit: Jim Malewitz / Wisconsin Watch)

A bill progressing through the Wisconsin Legislature was meant to spur the expansion of electric vehicle charging by confirming that private businesses can sell electricity to drivers at charging stations.

But amendments to the bill have turned electric vehicle proponents against it. The current version would ban government entities from owning or leasing charging stations and would only allow stations to charge for electricity that comes from utilities — not from on-site solar installations.

Clean energy proponents including Renew Wisconsin now say they want Gov. Tony Evers to veto the bill if it passes the Legislature with those provisions intact. The Assembly version of the bill has passed committees and could be heard by the full chamber in coming days.

Scores of private businesses in Wisconsin currently own EV charging stations and bill customers for the energy. But advocates fear utility opposition could shut them down at any moment, especially if utilities decide to build their own charging networks, potentially earning a rate of return in the process.

As a shift to electric vehicles appears increasingly inevitable, the Wisconsin debate highlights the growing fight across the country over who will control and benefit most from that transition.

The situation has much in common with the state's long-standing angst over third-party-owned solar installations. Utilities have argued such arrangements infringe on their exclusive rights to deliver power to customers, hence third-party solar is essentially impossible in Wisconsin even though no law bans it.

A bill currently before lawmakers would clarify that third-party solar ownership is legal, and another bill would facilitate community solar with third-party ownership. The EV bill in the state Senate was introduced by Sen. Robert Cowles, a Republican who is also the lead sponsor of the third-party-solar bills.

"All three bills have this thread of the utility wants to make sure nobody can sell any kind of electricity in any form," said Jim Boullion, government affairs director of Renew Wisconsin. He noted that at least 34 states have laws specifically differentiating EV charging from utility service. He said only five states — Iowa, Kansas, North Dakota, South Carolina and Virginia — have adopted policies restricting EV charging station ownership beyond utilities.

"We're talking about a different industry than the 'obligation to serve' that the utilities have — they're now expanding into 380 public charging stations (level 2 or DC fast-charging) transportation fuels," Boullion continued. "We think the regulatory system is good and we need it, but the way things are changing in the world, having these strict limits is really hampering the growth of this clean affordable energy source. There has to be some flexibility in the model we've had for 120 years to acknowledge this new technology."

Companion bills SB573 and AB588 explicitly allow private entities to own EV charging stations and bill customers for connecting to them (or "parking near" them). The bills also specify that billing can be done by either time or amount of energy used. Clean energy advocates want to clarify that billing by kilowatt-hours is indeed legal, since billing by time disadvantages customers with cars that charge more slowly or customers charging in cold weather (which slows charging speed). 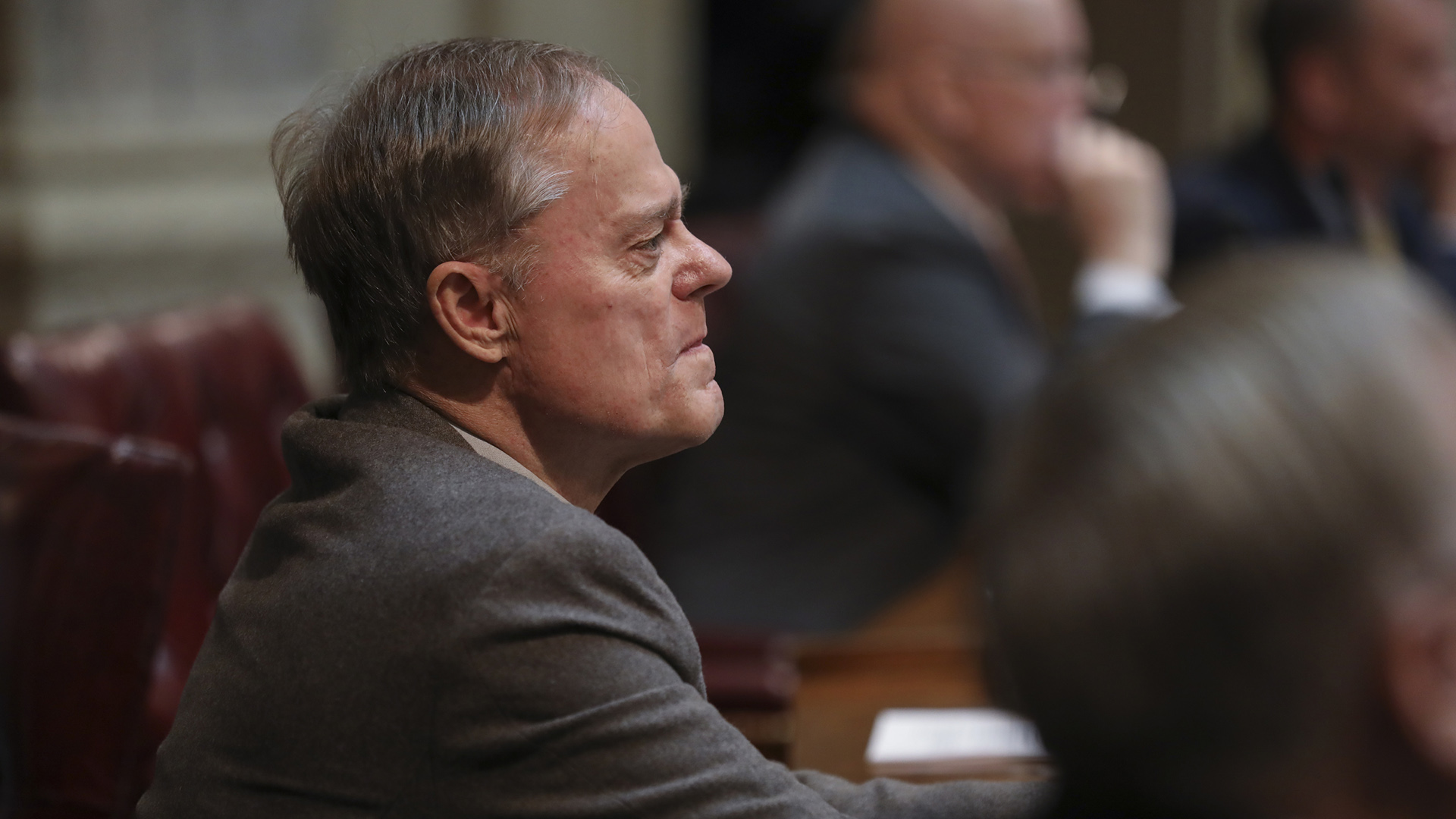 State Sen. Robert Cowles, R-Green Bay, is co-sponsoring a bill to make it easier to install electric vehicle charging stations. However, amendments to the bill pending before the Wisconsin Legislature have turned some clean-energy groups against it. Cowles is seen here at the Wisconsin State Capitol on Jan. 25, 2020 in Madison. (Credit: Coburn Dukehart / Wisconsin Watch)

Legal clarity can further the spread of charging stations across the state, advocates argue, especially as the federal Infrastructure Investment and Jobs Act could mean up to $79 million over five years for EV charging in Wisconsin, according to Renew's analysis. There are currently 380 public charging stations (level 2 or DC fast-charging) in Wisconsin, according to the Alternative Fuels Data Center. They are most heavily concentrated in the southeast and tourist-friendly Door County, with relatively few in the northern half of the state.

As eager as they are for clarification, advocates say the status quo is better than a law that bans sales from government-owned charging stations or charging stations powered by solar. (The bill would still allow both types if they don't sell power.)

The bill would mean cities and towns could not build for-pay charging stations in municipal parking garages or along commercial strips, for example. The League of Wisconsin Municipalities representing almost 600 towns and cities notes in a letter to legislators that it will revoke its original support of the bill if the amendments remain intact.

League government affairs director Toni Herkert framed it as an issue of equity in her December 2021 letter:

"A complete prohibition against municipalities owning, operating, managing, leasing, or controlling EV charging facilities does not allow for all areas of the state to be reliably served with charging facilities. Limiting entities that can provide charging facilities will simply result in the most profitable areas, where the market dictates successful investment, to be reliably served. We do not want electric vehicle charging opportunities to mirror the lack of market incentives witnessed for broadband investment in rural areas, it will again be those smaller and more rural communities that will be most impacted and under or unserved."

"Businesses aren't motivated to single-handedly spend their own money on an asset that will benefit their competitors on the same block, nor are they willing to take on liability of owning an asset that is permitted on public property," wrote Bullis. "City governments can step up to provide this value to multiple businesses simultaneously, ensuring everyone benefits."

Bullis noted that Montreal has almost 1,000 curbside chargers, while New York City has 120 and Los Angeles has 200.

"The EV charging industry is still young and quickly evolving; this provision picks winners and losers among EV charging business models by expressly locking us out of the state," Bullis wrote.

Advocates worry the bill would exacerbate drivers' "range anxiety," since the ban on for-pay charging stations owned by the government or powered by solar would make it harder to locate stations in remote and rural areas.

"If I'm going to the state park up north and have solar plus storage (powering an EV charger), then I do not have to run high-power lines out there" to install a charger, Boullion said. 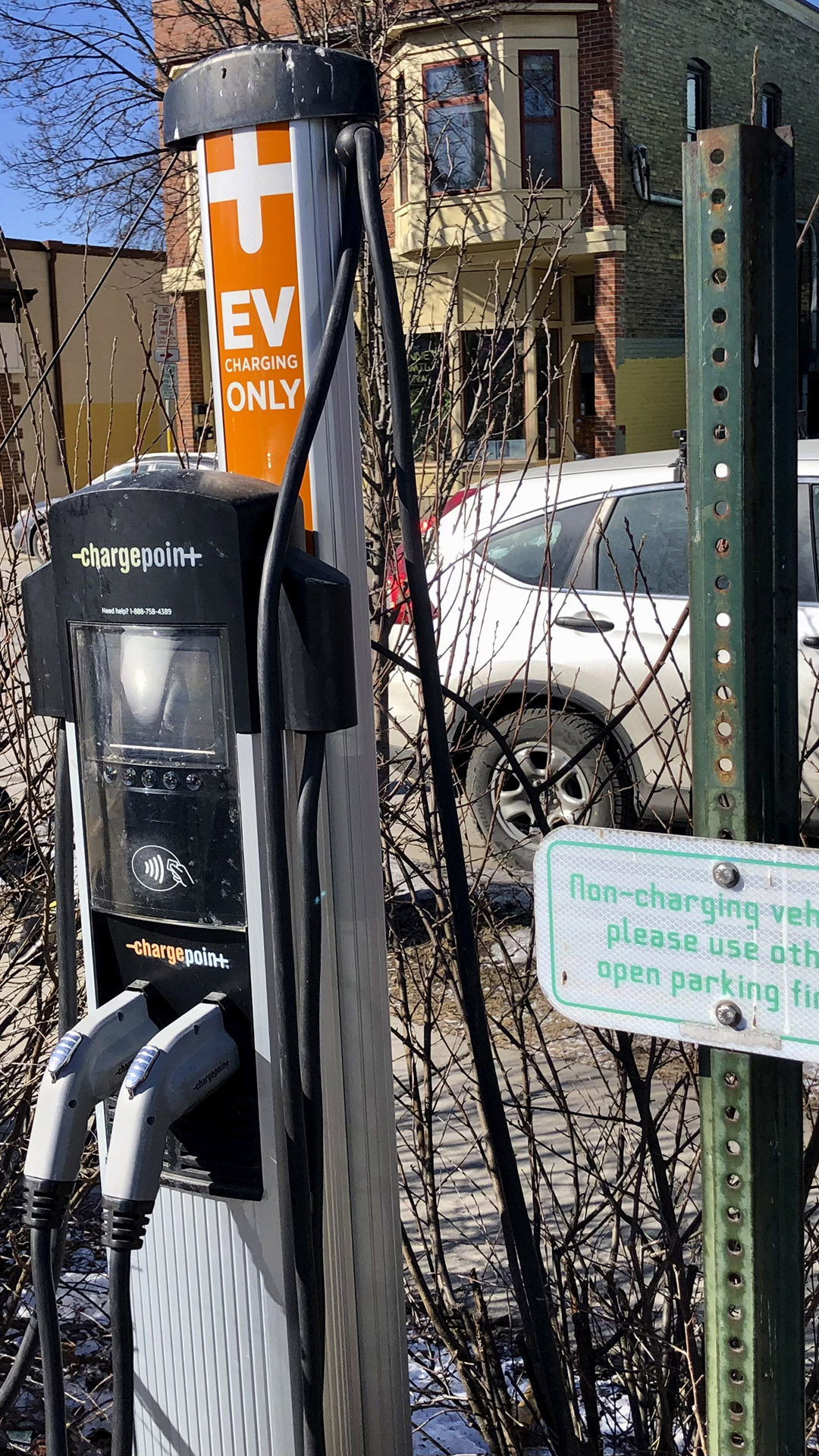 A ChargePoint electric car charging station sits in the parking lot of Willy Street Coop-East in Madison on Feb. 12, 2022. A bill to make it easier to install electric vehicle charging stations is being debated in the Legislature, but amendments to the bill have turned some clean-energy groups against it. (Credit: Jim Malewitz / Wisconsin Watch)

The bill also would prevent businesses with their own solar panels from receiving payment for EV charging, unless they install a separate meter to ensure that no power from the solar panels goes to the EV charger, Boullion explained.

This could be a disincentive for the proliferation of both solar installations and EV charging stations, and it would curb rather than encourage the ideal clean transportation solution: vehicles powered directly by solar energy.

Bergstrom Automotive, a company in Neenah, Wisconsin, has an on-site microgrid capable of generating and storing up to 23 megawatt-hours of solar annually, enough for almost 500 electric vehicle charge-ups. The development was done by EnTech, a Wisconsin-based company that has also installed solar-plus-storage EV charging at a Madison shopping mall.

Even if businesses or governments sell some behind-the-meter or off-grid solar power to electric vehicles, without utilities getting a cut, advocates argue that EV proliferation is bound to be a boon for utilities. Solar-plus-storage arrangements helping to power EVs can reduce demand spikes and stress on the grid, and even power emergency vehicles or provide extra energy during outages, Renew said in testimony submitted to the legislature.

And the more charging stations there are available, the more people will feel comfortable buying electric vehicles. In most cases, the entity charging for use of the charging stations will be first buying that electricity from the utility. Meanwhile, utilities should also see their demand increase as more and more cars are charged at home.

"The utilities will gain a lot of business out of this," Boullion said. "They will sell a lot of extra energy."

Kari Lydersen has written for Midwest Energy News since January 2011. She is an author and journalist who worked for the Washington Post's Midwest bureau from 1997 through 2009. Her work has also appeared in the New York Times, Chicago News Cooperative, Chicago Reader and other publications. Based in Chicago, Kari covers Illinois, Wisconsin and Indiana as well as environmental justice topics.